This week, Apple turned the iPhone into a medical research tool with the launch of ResearchKit. This open-source framework, described in the video above, lets a medical researcher set up a project to gather anonymous patient data on diseases like asthma, breast cancer and diabetes. Using their own smartphones, patients who join a project can monitor their symptoms on a regular basis — while contributing their data to researchers working to cure their condition. ResearchKit makes it possible to generate large, wide-ranging datasets about the day-to-day of disease.

ResearchKit launched with a set of five apps, including the Parkinson’s mPower app, developed by Sage Bionetworks. This app builds on the work of applied mathematician and TED Fellow Max Little. At TEDGlobal 2012, Little (watch his talk: A test for Parkinson’s with a phone call) made headline news when he launched the Parkinson’s Voice Initiative, a data-gathering project that aimed to develop a quick and non-invasive way to detect the disease with a phone call. Since then, Little, along with collaborators in the US, has been creating Android-based apps for monitoring Parkinson’s symptoms and gathering data for research. These apps have been used to record symptoms from thousands of participants in studies in the UK and US, leading to hundreds of gigabytes of data about Parkinson’s — which may open up entirely new scientific understanding about the disease.

We asked Little to tell us how his technologies got ported to ResearchKit, and how this could take his work to the next level.

How did you get involved with developing a Parkinson’s app for ResearchKit?

Apple was really impressed with the research work I’ve been doing over the last three years on apps for monitoring symptoms of Parkinson’s. We’d been using voice recording over mobile phones since 2012, of course. We’d also developed touch-screen tapping tests and walking and balance tests using the accelerometer in the smartphones. We’d been able to show in small pilot studies that we can predict symptom severity and very accurately detect who has Parkinson’s using these apps.

We were looking to run studies on larger populations to see if it would work on a larger scale — essentially what we were doing with the PVI project, but using smartphones. My collaborators and I developed apps on Android, but Sage Bionetworks wanted to replicate it on iPhone. So Sage built the mPower app on top of Apple’s ResearchKit API, embodying many of the tests that we’ve been developing over the years. 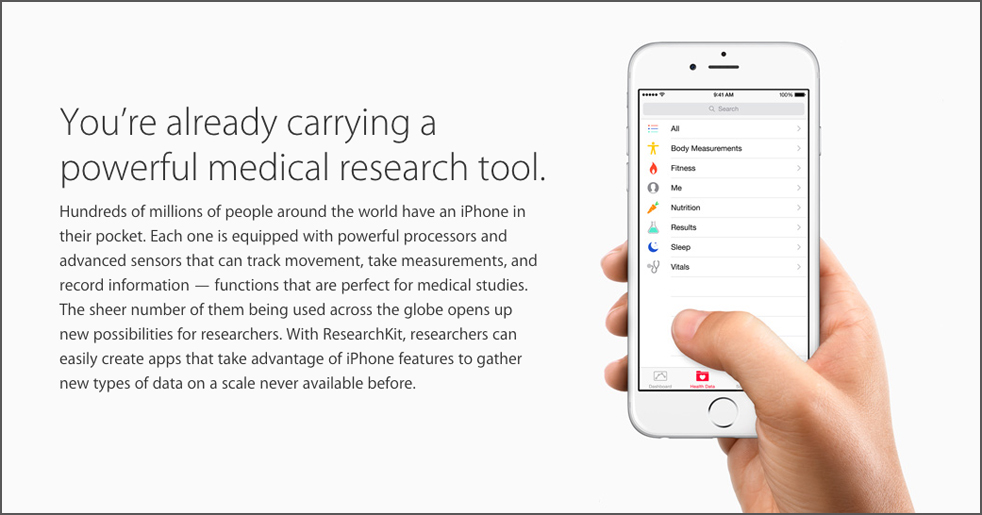 Apple’s ResearchKit turns the health data collection capabilities of the iPhone into a medical research tool. One of the first apps on the platform takes TED Fellow Max Little’s work to the next level.

What exactly does mPower do?

mPower is an entirely remote recruitment and objective sensor data collection app, tailored specifically for Parkinson’s research. It’s designed to capture objective data about the disease using daily tests such as voice, walking, balance and manual dexterity, all using the basic functionality of the iPhone.

What difference do you think it will make to your research to have these tests running on iPhones? And what does this mean for the future of medical research in general?

Since the launch of mPower earlier this week, they’ve been able to recruit nearly 8,000 participants — so it looks like the data collection is going fantastically well!

mPower has tremendous potential for speeding up discovery of medical and biological knowledge about Parkinson’s. Having symptom tests like this on iPhone opens up the whole, non-Android half of the world’s smartphone users. Apple’s enormous reach — around 700 million users — poses an extraordinary opportunity for researchers to gather objective symptom progression data from a sizable fraction of all Parkinson’s patients all over the world. It’s not often that researchers can set up studies that have essentially zero cost, yet are able to recruit subjects in the thousands in a matter of hours.

For example, we don’t yet know what causes Parkinson’s, but we do know it can’t be entirely genetic, behavioral or environmental. So it’s not enough to study the biological/genetic side alone. We really have to gather detailed knowledge about behaviour and the environment of each patient. With objective testing using smartphones, we can more fully complete the scientific picture.