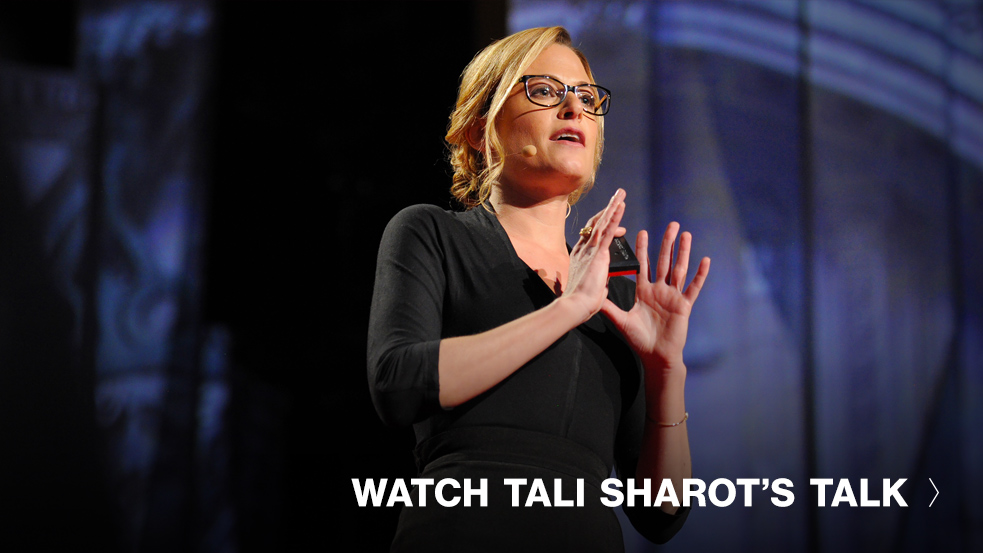 The cascading effect of small lies. Tali Sharot is the senior author on a paper published in Nature Neuroscience that sheds light on the possible slippery-slope effect of telling small, self-serving lies. Using an fMRI scanning device to monitor the amygdala, an area of the brain associated with emotional response, the researchers found that when participants believed lying was to their benefit, “they were more inclined to dishonesty and their lies escalated over time,” reports The New York Times.  What’s more, as their lying progressed, the response in their amygdalas decreased — and the bigger the decrease, the bigger their next lie would be. The findings suggest that the brain becomes desensitized over time to the negative emotional effects of lying, but Sharot cautions that, while we know the decreased activity is related to lying, whether or not it’s related to a negative emotional reaction is still speculation. Fellow TEDster Dan Ariely is a co-author on the paper. (Watch Tali’s TED Talk and Dan’s TED Talk, and stay tuned for Ariely’s upcoming TED Book.)

What everyday objects tell us about inequality. An initiative of the nonprofit Gapminder, Dollar Street collects photographs of everyday objects from the richest to the poorest households around the world as a way to explore inequality. For the project, a team of photographers photographed up to 155 objects, everything from toothbrushes to toys, in 200 homes in nearly 50 countries, a list that continues to grow. The completely fascinating website, where you can  explore the collection of photographs, launched on October 18. The project is the brainchild of Anna Rosling Rönnlund, who co-founded Gapminder along with TEDsters Hans Rosling and Ola Rosling. (Watch Hans’ and Ola’s TED Talk or read the Ideas article about Dollar Street.)

Robots to the rescue. A joint training exercise between members of the Italian Coast Guard and a team led by TEDster Robin Murphy from Texas A&M’s Center for Robot-Assisted Search and Rescue (CRASAR) tested a robot-assisted search and rescue to help safeguard migrants crossing the Mediterranean from Africa to Italy. Lasting 3 days, the exercise tested EMILY, an unmanned surface vehicle that can drive to a group of people in distress and position itself so that the greatest number of people can grab on. The EMILY system was tested in January 2016 to help migrants crossing from Turkey to Greece, and two EMILYs are currently in use by the Hellenic Coast Guard and Hellenic Red Cross; the Hellenic Coast Guard credited CRASAR with recently saving over two dozen refugees trapped in high seas. This new exercise pinpointed differences between migration routes, as well as new ways for robots and humans to interact in the water. (Watch Robin’s TED Talk)

Better diagnostics for pathogens. Richard Baraniuk is the lead author on a study detailing a new diagnostic method that could help slow the spread of antibiotic-resistant bacteria and mitigate infectious disease outbreaks by allowing faster detection of microbes. Typically, bacterial detection requires the use of DNA probes that are target-specific, which means detection can be costly and slow when dealing with new or mutating species. Instead, the new method uses a small number of DNA probes randomly generated that are not target-specific, greatly reducing the cost and time of detection. (Watch Richard’s TED Talk)

Open-source, autonomous vehicles. Sebastian Thrun, the creator of Google’s self-driving car project, is taking the development of autonomous vehicles open-source through his online education startup Udacity. The project, began as an accompaniment to their new autonomous car-engineering course, will make the software driving the car and the data collected by the car available to anyone, for free. With the code needed to begin testing the car written by Udacity engineers, Udacity is now soliciting contributions by giving prizes for the best responses to specific projects, and students in the course are contributing to the project as well, reports the MIT Technology Review. (Watch Sebastian’s TED Talk)

A perpetual spring for honey bees. Neri Oxman and her team have created a synthetic apiary that creates a constant spring-like environment for bees, allowing seasonal honey bees to remain active and producing honey year-round. The apiary regulates light, humidity and temperature to create the optimal environment for the bees’ survival and is set inside a building on the MIT campus, rather than outside. The research offers hope for bees, whose numbers have been steadily declining, by demonstrating their ability to survive in a completely synthetic environment. (Watch Neri’s TED Talk)

New faces at the UN. On October 14, following his appointment as Secretary-General-designate of the UN, António Guterres announced the members of the transition team that will help prepare him to assume his duties on January 1, 2017. Fellow TED speaker Melissa Fleming, now the Head of Communications and spokesperson for the High Commissioner at UNHCR, will act as senior advisor and spokesperson for Guterres. (Watch António’s TED Talk and Melissa’s TED Talk. Plus, read Melissa’s article on 8 practical ways to help refugees.)