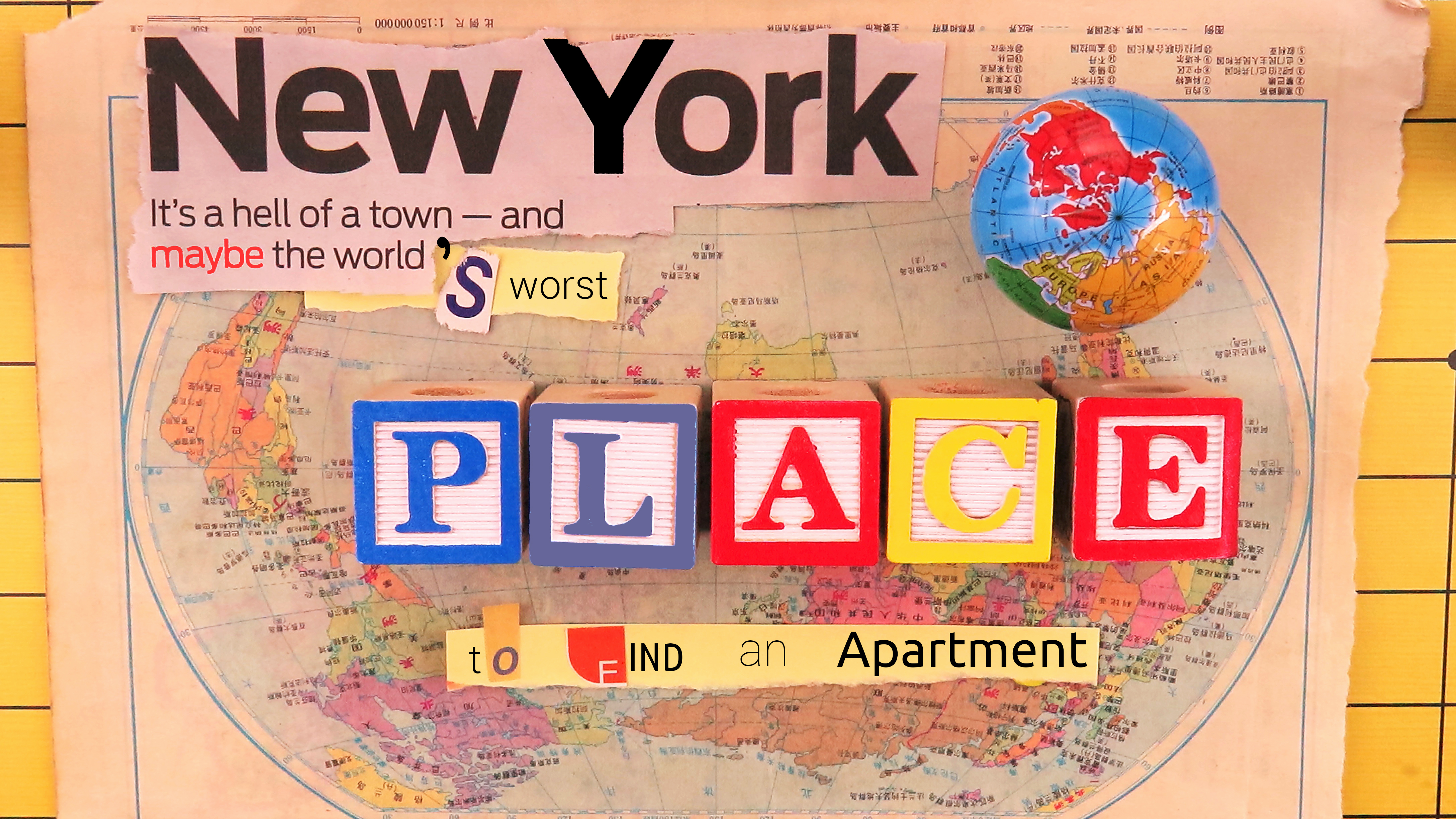 Cockroaches. Moldy walls. Stolen deposits. Bad landlords happen to all of us, and it can be impossible to tell before moving into a property whether the experience will be a good one, especially in housing-short cities like New York, where landlords seem to hold the cards. But TED Fellow Yale Fox is looking to change that with RentCheck — a new rental search engine that not only finds apartments but rates properties and landlords based on consumer reviews and the city’s open data.

RentCheck launches today in New York City, and will ultimately be rolled out in San Francisco, Chicago, Los Angeles, Dallas, Toronto and Vancouver, too. On launch day, the TED Blog asks Fox to tell us more.

Did RentCheck come out of a bad personal experience with renting?

Yeah — every place I’ve ever rented in my entire life, especially in New York. When my fiancée and I first moved to New York from Los Angeles, we rented a place and put down three months up front — our entire nest egg. It was a brand-new building, three years old. I had a broker check it out for me, and he said everything was okay. But when we got there, after a minute or two of looking around, we said, “What the hell happened in here?” The bathroom was disgusting. There was a dead bird, and insects rolled up in the blinds. It was vile. But all the management said was, “Sorry, man. Welcome to New York.” Because of our contract, we ended up having to stay for six months before we could finally leave.

To put this in perspective, I’m talking about a new building. There are many people who live in far worse conditions in New York — people who have to turn on their stove or oven to heat their place because the landlord won’t fix the radiator, for example. That can cause fires. With RentCheck, we’ve created a platform that increases the amount of transparency involved in a simple, common real estate transaction — the signing of a lease. The whole idea is that RentCheck can help renters avoid these bad situations in the first place. Additionally, it’s a place for renters to report problems publicly — all backed up by official city data. 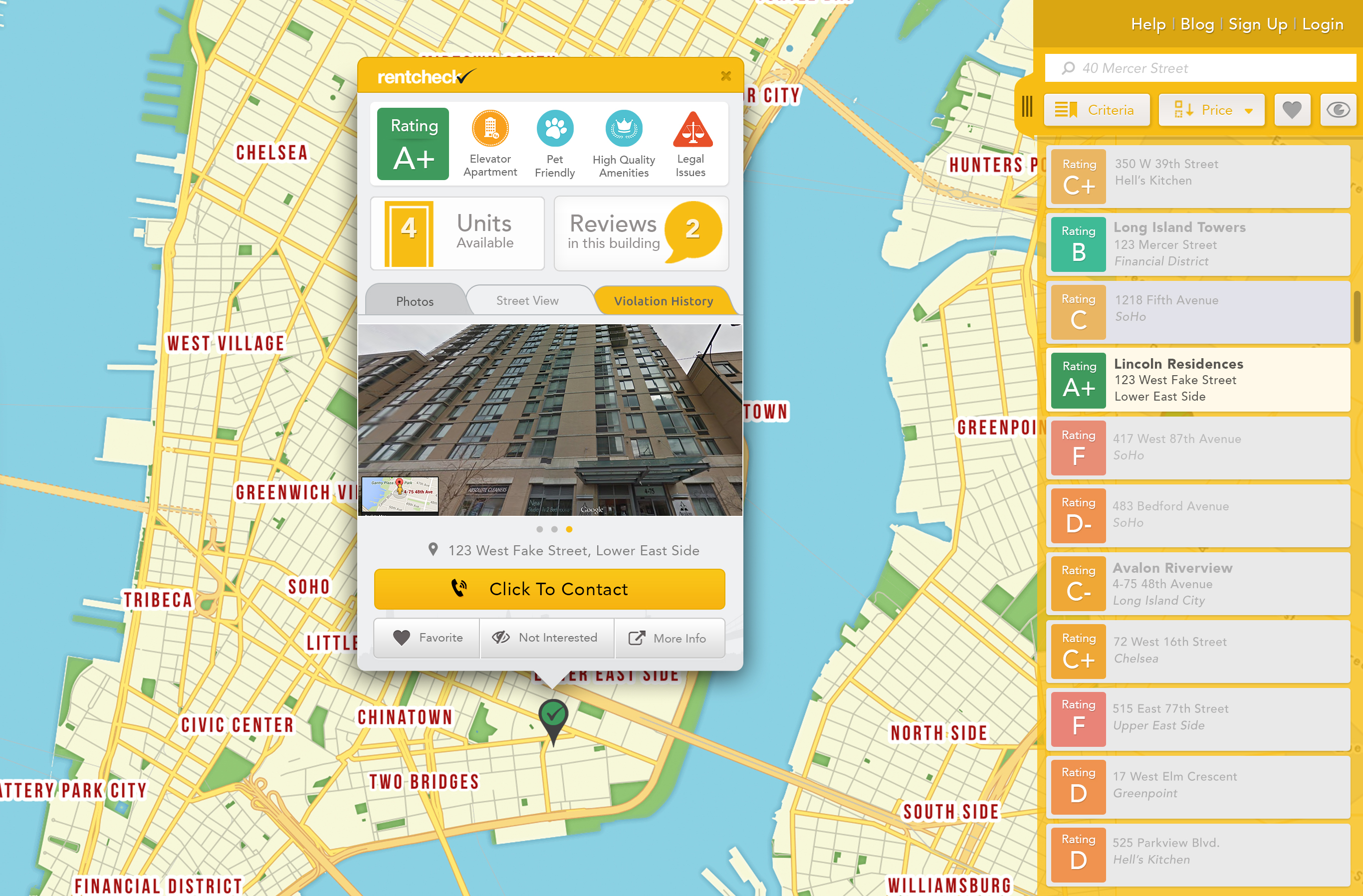 RentCheck is an apartment rental search engine, but what makes us unique is that we give renters information about that property and landlord that has never before been easily available — such as cleanliness, pest problems, maintenance problems, landlord responsiveness and even information on whether or not they returned a security deposit on time, or at all. To express this, we compute a “RentCheck Rating” — a letter grade from A to F, which describes the quality of life in the building. The rating has nothing to do with the quality of the building itself; it’s not about whether it’s a fancy high rise or a brownstone. It’s about what will happen if you have a problem — how issues are handled. If you live in a B building, for example, it’s going to be fine. Repairs will likely be handled appropriately.

Where do you get this information?

Much of the information comes from New York City’s open data and public records. In fact, RentCheck would not have been possible two years ago: I was inspired to create it when New York City made its city data open in September 2013. You see, in New York, if you have a problem with the landlord, you call 311 to register your complaint. You say, “Hey, there are roaches, and my landlord won’t get rid of them.” A day or two later, the city will send an inspector, and if they find the roaches, they’ll mark it as a violation. Typically, it stops there. If landlords don’t want to do anything about a problem, they don’t really have to. Most tenants either accept it, deal with it themselves, or go to court. But all this information gets filed in the city records. So at RentCheck, we take all that information and score every residential building in New York — and there are 1.1 million of them.

We’ve also gathered our own information based on renter reviews we solicited ourselves prior to launch. We hold contests where if you post a review about your landlord you’re automatically entered to win a year’s supply of unlimited MetroCards. The response has been great.

.
How much landlord complaint data is generated by the city?

There are about 4,000 complaints against landlords every week. It’s a lot. And we pull fresh data every night.

How will RentCheck benefit landlords?

We’re hoping that over time, good landlords get rewarded for taking good care of their buildings and tenants. We hope that they’ll be in higher demand so they can charge an additional premium. When you search for a one-bedroom apartment in Chelsea for $3,500, for example, it might show you several properties, all ranked. A landlord who owns an “F” property probably won’t be able to lease his place, but an “A” will go quickly. People prefer to not live with the bad landlords, and landlords will have to adjust their prices accordingly. So our service benefits good landlords. If you’re not interested in treating your tenants properly, then we’re not going to be a good platform for you to find potential renters.

Is there a chance for bad landlords to improve their buildings, and hence their scores?

They can respond to negative comments, and they can take steps to make improvements, but it does take a few months to change their score. It has to take time; it can’t happen overnight. We think that’s fair, as most tenants don’t get their problems fixed overnight either. A landlord can’t email us and say, “Hey, I got rid of the roaches, but RentCheck still says I have them,” and expect us to boost the rating. We would reply, “Well, you had roaches last month, and the month before, in two different units. We can’t really take your word for it. As long as we don’t receive more roach violations then we’ll know that things have been resolved.” We can also easily detect which landlords are fixing conditions, and reward them with higher visibility in our platform.

Do you expect backlash from landlords?

Definitely. But it’s in service of a social good. Our long-term goal is improving people’s lives, and taking a lot of stress and headache out of the renting process. The main problem we are addressing is the uneven distribution of power between landlord and tenant. In the event of any dispute over a rental contract, the landlord always has more power because they typically have larger bank accounts. Court systems have been set up to deal with these problems, but they take time and cost the city a lot of money. RentCheck puts the power back in the hands of the tenant in the form of information — we hope it will prevent court cases in the first place.

But the main point is, in this age, transparency is king. Real estate has typically been one of the most opaque sectors, so adding transparency to any situation like this is going to trigger all sorts of backlash. The goal is to say to landlords: “Look, we have all the data. We’re watching you, so you can work with us or against us.” 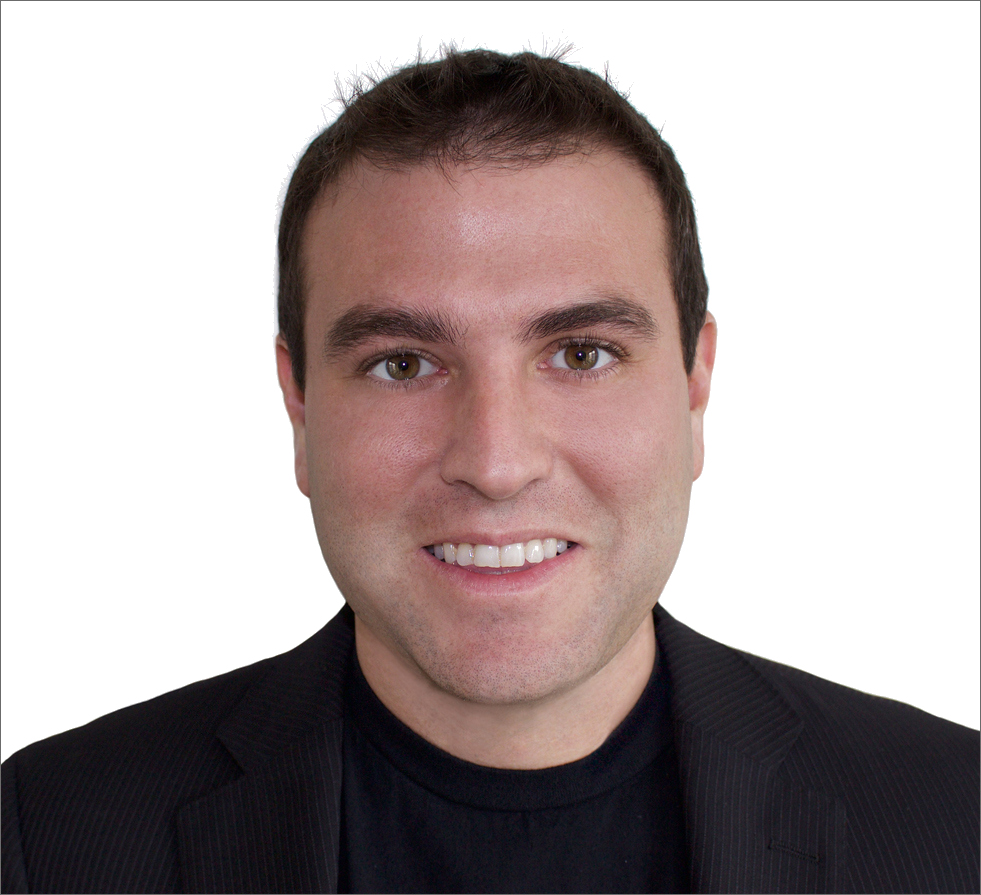 TED Fellow Yale Fox was inspired to start RentCheck after a terrible rental experience. He decided to go for it when New York City opened up its data in 2013. Photo: Yale Fox