It’s Friday afternoon, and TED staffers are cutting and folding strips of white felt, carefully sticking the little strips into grates of chicken wire stapled to wooden frames. On the floor are five large wood panels and some metal pans filled with paint. Just a normal day at TED’s headquarters.

In less than a week, we’re hosting a design salon, Radical Craft, in the TED World Theater at our office in Manhattan. With a theme like Radical Craft, the theater’s usual low-key stage design won’t do. So our design curator Chee Pearlman, working with Rockwell Group and graphic designer Stephen Doyle, collaborated with TED’s theater team to make something entirely new. Their brief: Taking inspiration from the graphic identity that TED’s design team created for the salon (which was, in turn, inspired by a Scott Patt painting), bring something crafty, tactile, and handmade to life on stage. Where the white felt comes in? That’s yet to be seen, but there’s a lot of enthusiasm in the room. Nothing like a craft project on a Friday afternoon. 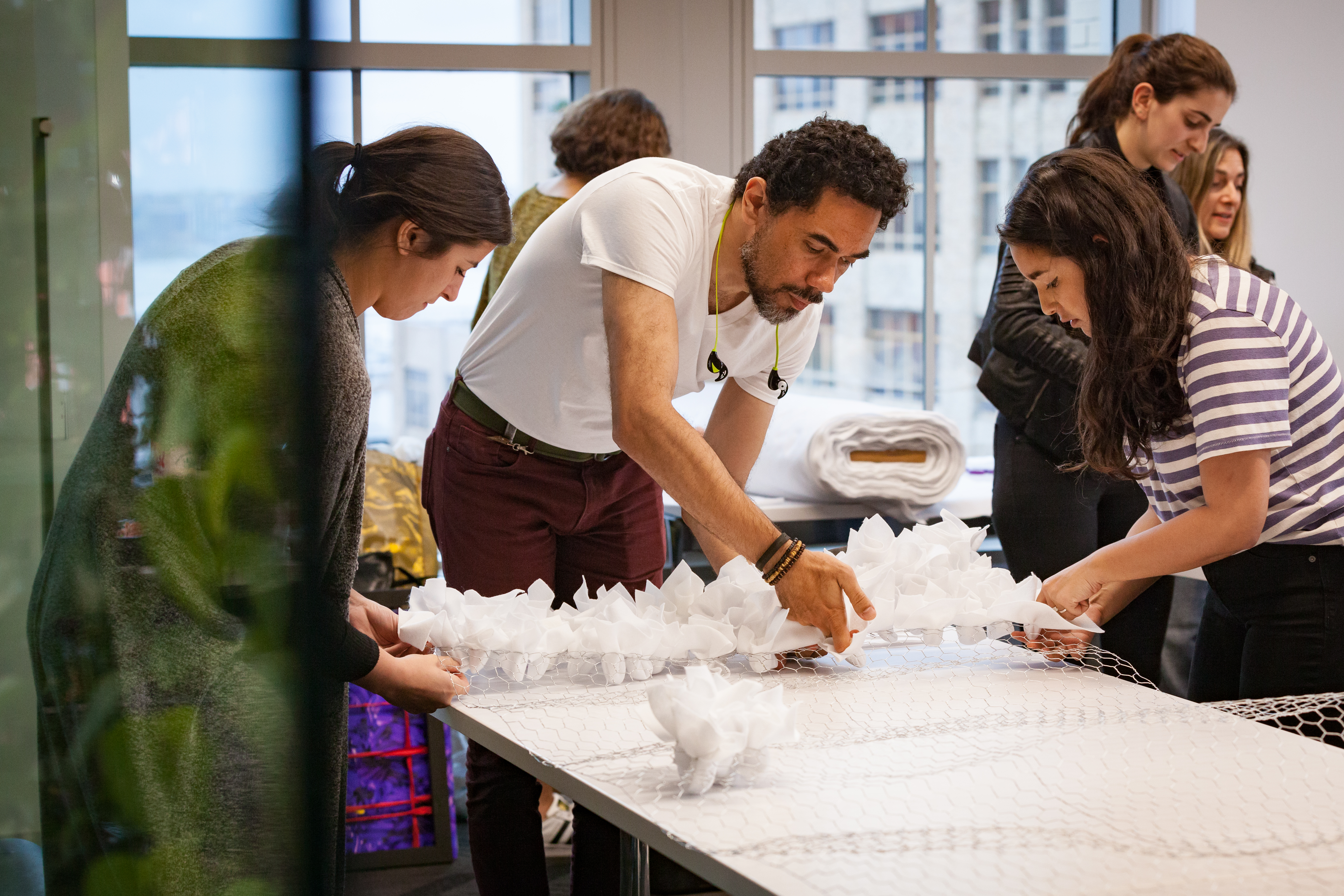 On Friday afternoon, these TED staffers are cutting, folding and placing strips of felt into a chicken-wire grid.  (Photo: Dian Lofton / TED)

On Monday morning, when I walk into work, it smells just faintly like fresh paint. The five wooden panels, now standing up on the stage, have been finger-painted with streaks of purple on emerald green, finger marks twisting and swirling from top to bottom. The artist behind the panels, Stephen Doyle, tells me he was inspired by Richard Long’s mud paintings: “He puts mud on the wall with his hands and leaves handprints. It’s very physical and it’s very human. There’s a craft-meets-humanism in the imperfections.” Seeing these panels painted literally by hand, I understand exactly what he means.

And where’s the white felt and chicken wire that we crafted on Friday? It’s standing onstage too, alternating between the painted panels like a lovely vertical bouquet. I tell Chee how incredible the stage looks, and she confides that the theater team, including my coworker Stephen Robbins, were here all weekend trying to get the look right. And they haven’t finished yet. 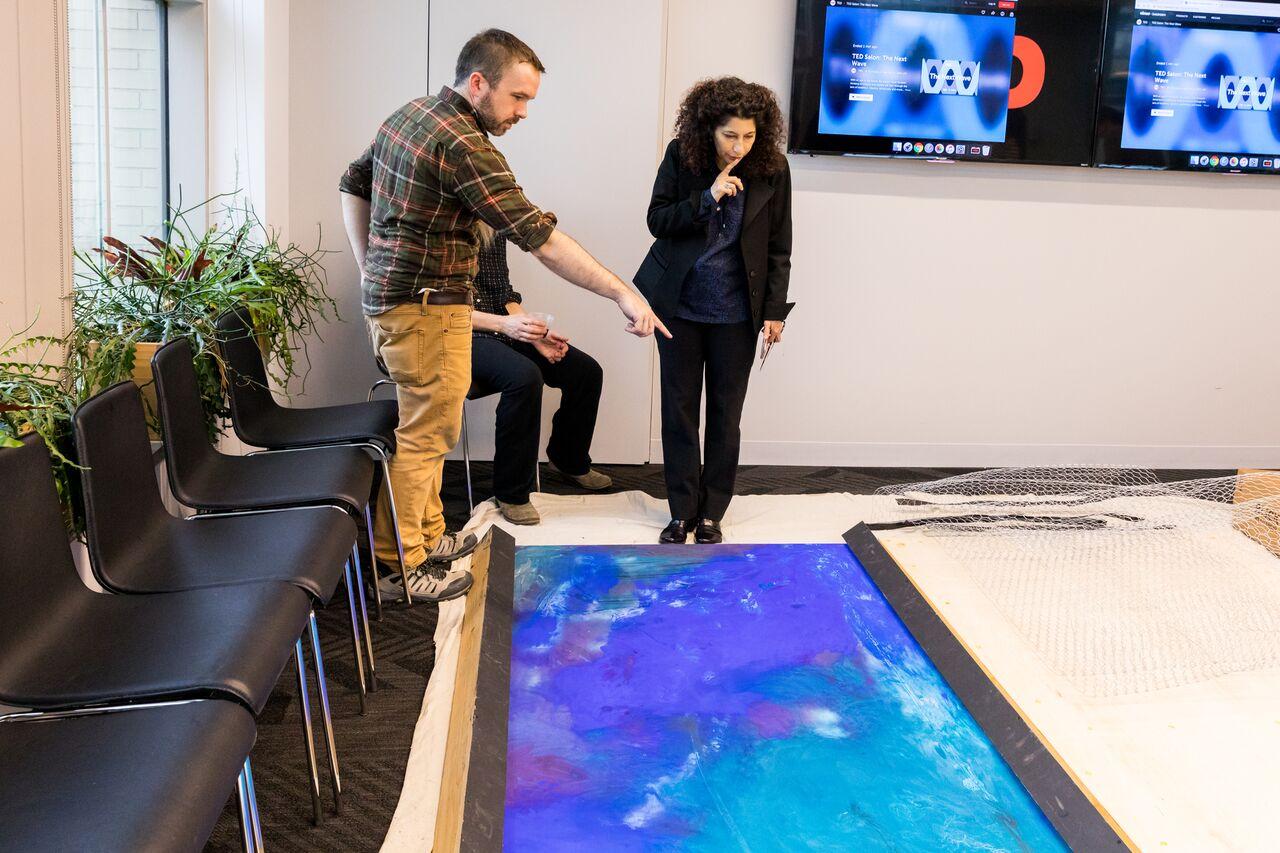 TED theater’s audio-video technician Stephen Robbins and design curator Chee Pearlman brainstorm over the painted panels. Their goal: to create a warm, handcrafted look for the stage that will also look great on video later on. (Photo: Dian Lofton / TED)

Tuesday afternoon. I’m sitting in the theater with Donna Pallotta, Art Director at Rockwell Group, and Laurie House, head of the theater team at TED. Their focus now is on lighting. How can our felt panels be lit and colored to achieve the exact look Donna envisioned? After some trial and error, it’s decided that lighting the felt from behind is the way to go, with Chroma-Q Color Force LED batten range lights that can pulse and change color between each talk.

The jewel-toned light, shining up from the floor, turns the felt into a memorizing, glowing backdrop that creates a sense of depth between the finger-painted flats. Donna examines the scene, hands on hips, her well-trained eye scanning what’s in front of her. When I ask what she’s thinking, she says, “I love the idea that the background can be changeable, and you might have a palimpsest of different lighting.” I watch as the light turns from green to blue to pink. It’s all coming together. 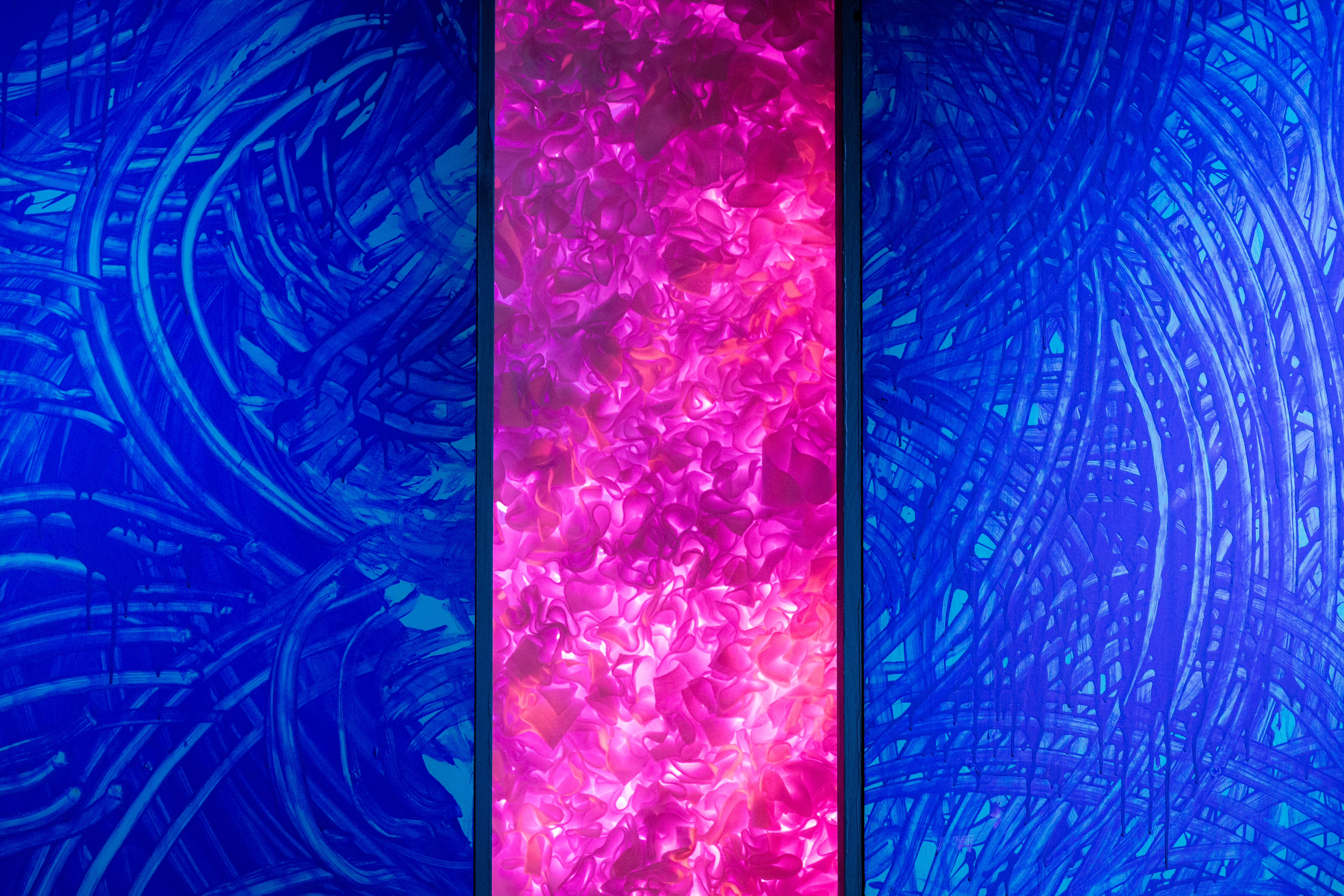 Wednesday midday. It’s the day before the event, and the theater is bustling. Wires are coiled and uncoiled, boxes and carts are moving in and out, and the theater team is running around with the purposeful energy of dress rehearsal day, checking and re-checking every detail. It looks great, but there’s still that minor question hanging in the air: Will all these design choices make sense together when the speakers are on stage and the audience is in their seats?

Thursday night: the design salon. As the audience walks in, they see the stage, with the painted panels, the felt, the lights and the graphics all working together, for the first time as a single cohesive thing. And it looks amazing, a celebration of craft and stagecraft — and also a celebration of what can happen within a week when brilliant minds come together.

As the salon starts, something from David Rockwell (the head of Rockwell Group, whose vision inspired this project) pops into my head. It was his response when I asked what “radical craft” meant to him. “The term ‘craft’ tends to bring to mind a finely wrought object that retains the presence of the maker’s hand. But to us, craft is really a collaborative process,” he said. “Craft is about groups of people solving big challenges on the fly and creating the unexpected out of simplicity.” 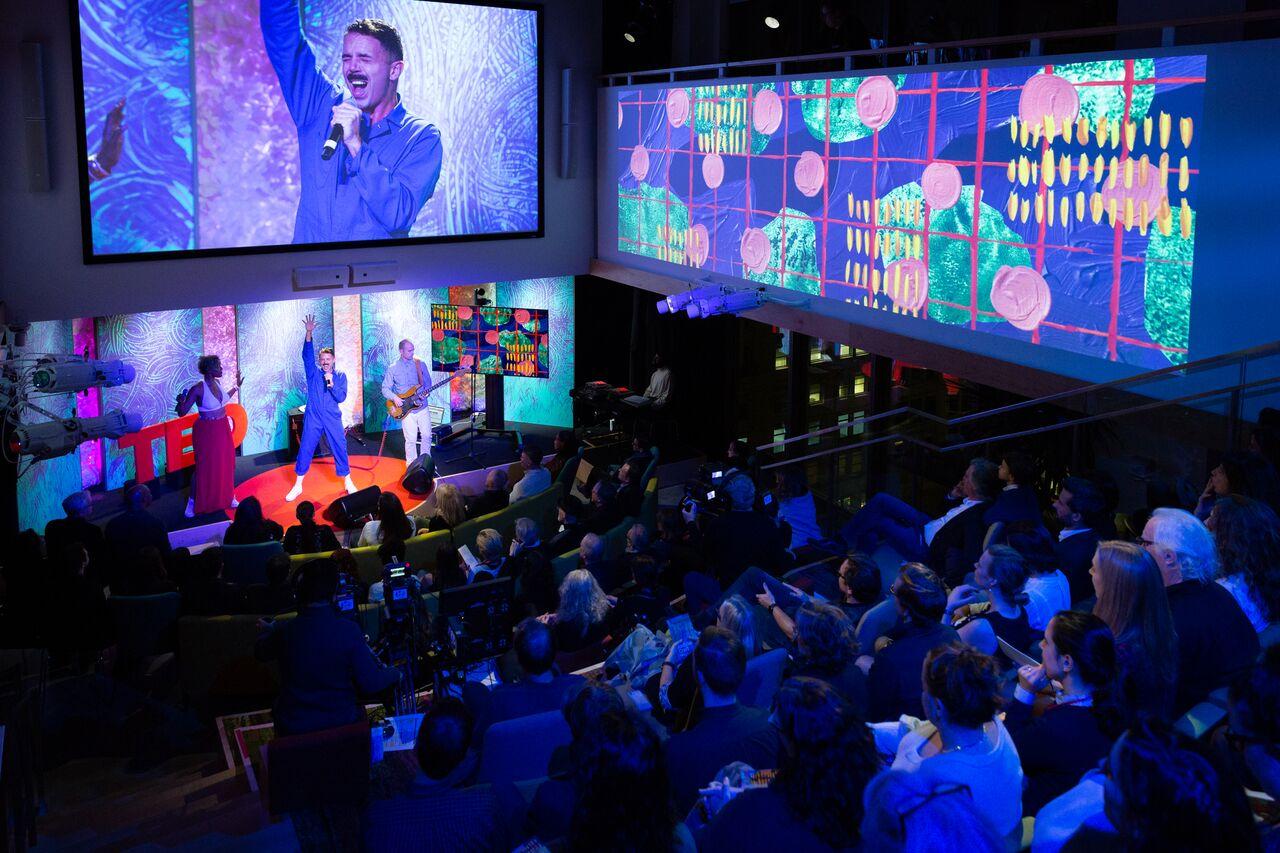 During the show, the conference graphic is projected on the side walls of the theater. Inspired by a Scott Patt painting, the graphic in turn inspired the multi-layered stage design — which looks great both live and on video behind the band Crush Club. (Photo: Ryan Lash / TED)