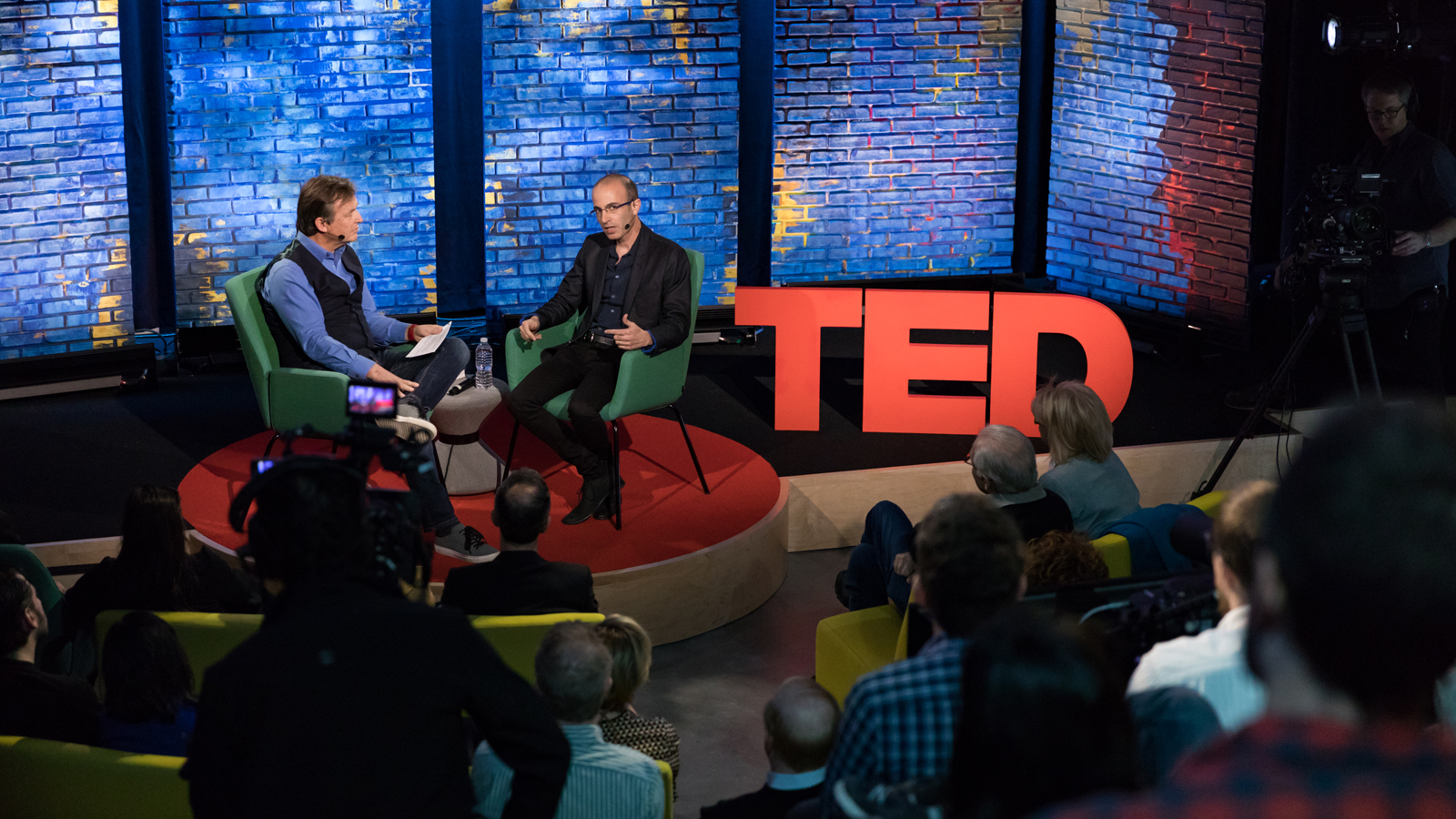 In a wide-ranging conversation with Yuval Harari at TED’s theater, TED’s Chris Anderson (left) asked: How should we behave in this post-truth era? And Harari replied: “My basic reaction as a historian is: if this is the era of post-truth, when the hell was the era of truth?” Photo: Dian Lofton /TED

How to explain the stunning political upheaval of 2016 — Brexit in the UK and Donald Trump’s election to the presidency in the US — as well as the current and ongoing atmosphere of division, discontent and disquiet that fills many people’s lives? One simple answer: “We’ve lost our story,” says Jerusalem University historian Yuval Harari, in a conversation with TED curator Chris Anderson during the first of a series of TED Dialogues in NYC.

Humans “think in stories and make sense of the world by telling stories,” says Harari, the author of Sapiens and the new book Homo Deus. In the past few decades, many of us believed in the “simple and attractive story” that we existed in a world that was both politically liberal and economically global. At the same time, some people felt left out of — or didn’t believe — this story. By 2016, they voiced their discontent by supporting Brexit and Trump and LePen, retreating into the cozy confines of nationalism and nostalgia.

Right now, “almost everywhere around the globe, we see [politicians with a] retrograde vision.” Harari points to Trump’s efforts to “Make America Great Again,” Putin’s hearkening back to the Tsarist empire, and leadership in Israel, his home country, seeking to build temples. He views leaders — and citizens — a bit like lost children retracing their steps back to the place they once felt safety and security.

Unfortunately, taking refuge in nationalism will not help humanity tackle the huge and looming problems of climate change and technological disruption at global scale. While climate occupies the worries of many people, Harari believes the general public is less informed about the latter problem: that in the next 20 to 30 years, hundreds of millions of people might be put out of work due to automation. “It’s not the Mexicans, it’s not the Chinese who are going to take jobs from people in Pennsylvania,” he says, “it’s the robots and algorithms. And we have to do something about it now. What we teach children in school and college now is completely irrelevant for what they will need in 2040.”

And nothing less than a concerted international solution — most likely, in the form of global governance — is needed to take on these planet-scale issues. “I don’t know what it would look like,” admits Harari. “But we need it because these situations are lose-lose situations.” When it comes to an area like trade, where both sides can benefit, it’s easy to get national governments to come together and negotiate an agreement. But with an issue like climate change in which all nations stand to lose, an overarching authority is needed in order to force them to act. Such a global government would “most likely look more like ancient China than modern Denmark,” he says.

Harari notes that most of today’s nationalist governments seem loath to address — or even acknowledge — global problems like climate change. “There’s a close correlation between nationalism and climate change denialism,” he says. “Nationalists are focused on their most immediate loyalties and commitments, to their people, to their country.” But, he asks, “Why can’t you be loyal to humankind as a whole?” So in our current political climate, Harari says anyone interested in global governance needs to make it clear to people that “it doesn’t replace local identities and communities.”

Harari concluded the conversation on a cautiously optimistic note. We should take heart in the fact that the world is much less violent than it was 100 years ago: “More people die from eating too much than eating too little; more people die from old age than infectious disease; more people commit suicide than are killed by war, terrorism and crime,” he says. Or, as he wryly sums up, “You are your own worst enemy.” He believes that Brexit could be as seen as a statement of independence, and by those standards, “it’s the most peaceful war of independence in human history.” And he emphasizes that humanity has shown it can rise to major challenges. The best example is how we reacted to nuclear weapons. In the middle of the 20th century, many people believed that a nuclear war would inevitably lead world into catastrophic destruction. “But instead, nuclear weapons caused humans all over the world to change the way they managed international politics and to reduce violence.”

He adds, “The problem is we have very little margin for error [now]. If we don’t get it right, we might not have a second option to try again.” 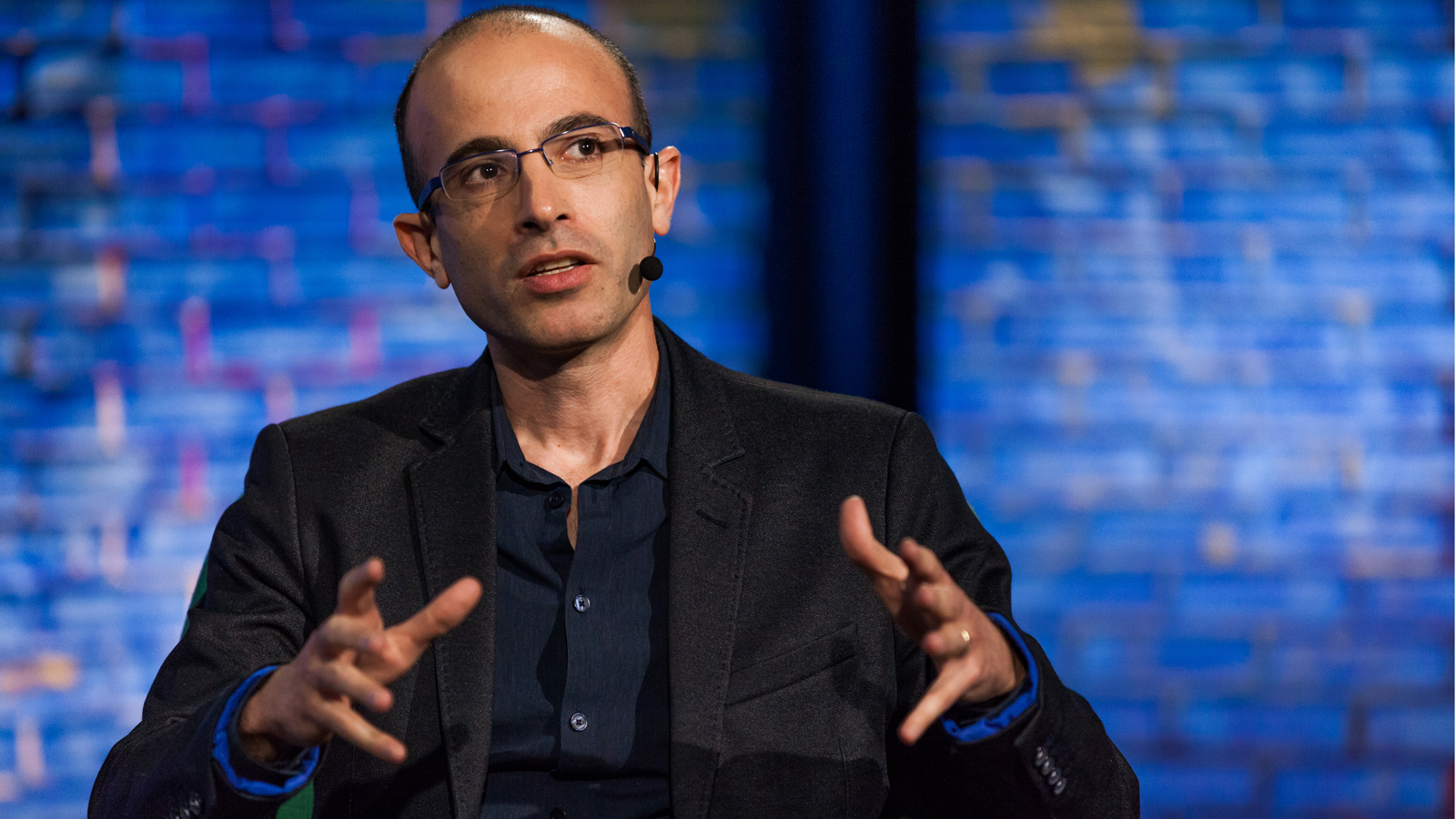 Yuval Harari says: “One of the most powerful forces in history is human stupidity. But another powerful force is human wisdom. We have both.” Photo: Jasmina Tomic / TED