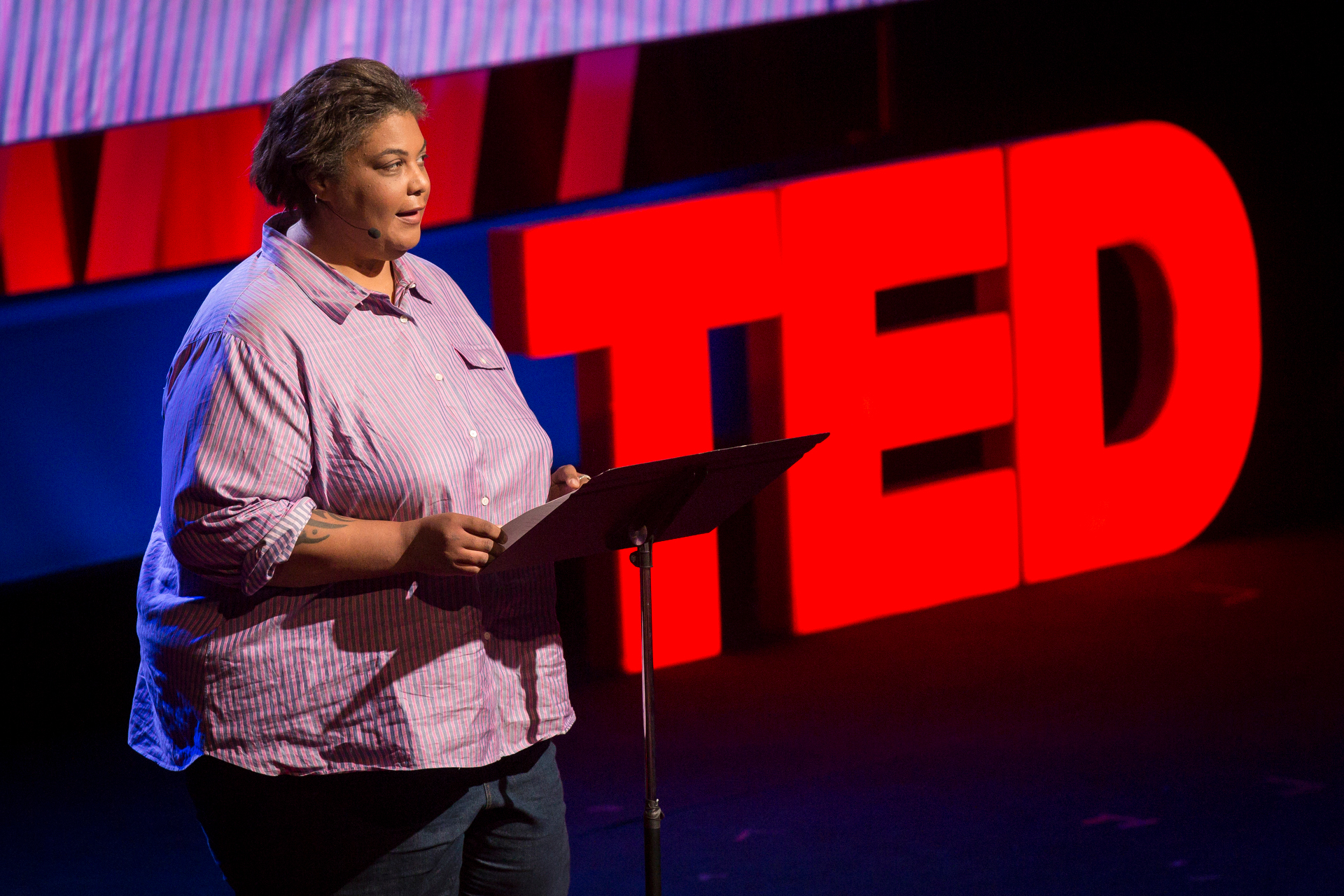 Roxane Gay brings the house down at TEDWomen with a wonderful reflection on what it means to be a feminist. Photo: Marla Aufmuth/TED

“I have passionate opinions about gender equality,” says writer Roxane Gay. She takes the TEDWomen stage to tell us how she became known as a bad feminist. Turns out, it was a label she gave herself, almost as a personal joke. After all, she thought, real feminists were “angry, hairy, man-hating, sex-hating women” — and she wasn’t one of them. She likes listening to thuggish rap with vilely misogynistic lyrics — at loud volume! She considers certain domestic tasks, bug killing, vehicle maintenance to be a man’s work! She really likes the color pink! She enjoys fashion magazines! She was clearly doing feminism all wrong!

But when Gay thought about it some more, she realized that this was a deeply complex situation. That, in fact, the word “feminist” has become an accusation. That feminism has become “an f word, and not a nice word.” That this is itself a problem.

“If a woman wants to take her husband’s name, that is her choice and it is not my place to judge. If a woman chooses to stay home to watch her children, I support that too,” she continues. So what’s the rub? “The problem is that our society is set up to make women economically vulnerable” when they make that kind of decision. Nods and applause from the audience, who are clearly enjoying both her confessions and her analysis.

Fact is, too many women are afraid to be known as feminists. When Beyoncé projected the word behind her at the 2014 MTV Awards, the ensuing discussion was not about how awesome the musician was, but about how good she was at being a feminist. Instead of taking a grown, accomplished woman at her word, Beyoncé got judged. We do the same of anyone who dares to stand up for women’s rights, says Gay. We demand perfection; we go far beyond constructive criticism to create a culture and atmosphere of fear that promptly attracts no one.

Instead, we must feel free to admit our imperfections. Let’s take a stand, says Gay, in whatever way we can. She, for instance, needs to cut out listening to women-hating rap. Reality is, she acknowledges, if she continues to listen to it, artists will continue to make it. So she needs to stop. However insanely catchy the music it is, it isn’t worth it. Nor is television that treats violence against women as a sport. Nor are movies that treat women as decorative objects. Nor, she adds, should we support professional sports whose athletes treat their partners like punching bags. In making such small but pointed decisions, men and women can together push to make a difference. “We can commit these small acts of bravery and hope that our choices trickle up to the people in power, people who make bigger, braver choices to make lasting change.”

Gay ends on a somber note. “Once upon a time, my voice was stolen from me, and feminism helped me get my voice back,” she says, quietly. “There was an incident.” It’s like the room knows what kind of incident she means; the silence becomes palpable. “Some boys broke me when I was so young I did not know what boys could do to break a girl. They treated me like nothing, and I began to believe I was nothing,” she says. How did she learn otherwise? Through writing. “I wrote myself back together,” she says. And she did that by reading the words of strong women who showed her a way forward. “I read the words of women who showed me I was not nothing. I learned to write like them, and then I learned to write like myself.” And then she realized that through her words she too could inspire others who might need it.

“I am just a woman,” she concludes. “I am a bad feminist and a good woman. I am trying to become better in how I think and say and do — without abandoning what makes me human.” She concludes with a bow, to a standing ovation.