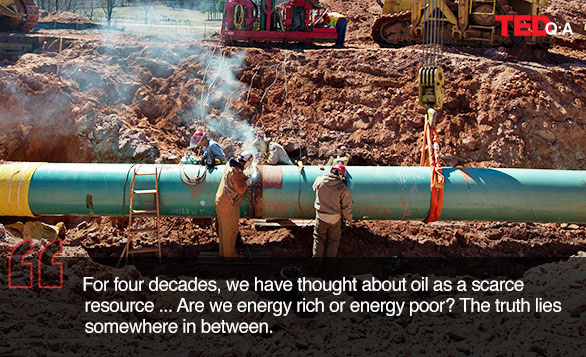 The Keystone XL pipeline, which has been proposed to transport oil the 1700 miles from Canada to the Texas Gulf Coast, is something of a Rorschach test in the United States. Advocates of the pipeline believe that it’s the holy-grail project that will create jobs for Americans and ensure the country’s oil independence. Opponents of the pipeline worry about environmental damage — first and foremost, oil spills — not to mention the fact that construction of the pipeline would only continue our reliance on oil. The issue just came to a head in the Senate, with Senate Democrats stopping legislation to approve construction by a single vote. They will likely vote on it again when the new Senate convenes in January—and the vote may well  have a different result.

In the TED Book Keystone XL: Down the Line, Washington Post reporter Steven Mufson stays far away from the political fray. To get a better understanding of the pipeline, he traveled with photographer Michael Williamson down the entire length of the proposed project. As they traverse the areas which the pipeline would pass through, they share their insights and reveal starting realities about the impact the pipeline could have on everything from the environment to local economies to people’s lives.

As debate over the Keystone XL boils over, it felt like the right time to ask Mufson a few questions. Below, his take on this highly controversial proposed project.

Why are Canada and the United States now in a rush to expand oil exporting?

Canada is already a major oil exporter — in fact, they’re the biggest source of U.S. crude oil imports. Companies producing oil in the tar sands in northern Alberta are looking to double production there — and they need more ways to move that oil out. Currently, the limited options for transporting oil only pile onto the costs of production. The biggest and most natural market is the United States, both because our economy is big and because U.S. refineries on the Gulf of Mexico have been modernized and upgraded to handle low-quality crude oil like that coming out of Alberta. Once the crude oil is refined, it’s easier to sell in the United States or abroad. The United States both exports and imports refined products, though given the size of the U.S. refinery industry and relatively flat U.S. gasoline consumption, the volume of U.S. exports of gasoline and diesel has increased.

You say the pipeline is a Rorschach test of how Americans view energy issues. Can you elaborate?

For four decades, we have thought about oil as a scarce resource. We imported more and more at higher and higher prices and went to distant frontiers, whether onshore or offshore, to find oil and gas. The sheer scale of the oil sands in Alberta has been Exhibit A of those extremes. The Saudi oil minister has often said that prices had to stay above $60 a barrel to keep the Canadian oil sands economically viable. All of a sudden, the trends reversed and a slew of oil prospectors – like the North Dakota fracking pioneer Harold Hamm who is profiled in the book – and energy experts are talking about U.S. energy abundance. Imports have dropped nearly in half. U.S. oil output has climbed over 7 million barrels a day and the International Energy Agency has forecast that U.S. output will surpass Saudi Arabia’s by the mid-2020s. Canadian oil sands would compete for U.S. refinery space with Venezuela, and North Dakota, Louisiana and Texas shale oil has enabled the big refiner Valero to stop importing light, sweet crude oil.

So which is it? Are we energy rich or energy poor? The truth lies somewhere in between. Yes, the United States has surprising new resources at home, and U.S. consumption may have hit a plateau as fuel efficiency rises. This is a big benefit for the U.S. balance of trade and the domestic oil and gas industry. And while U.S. oil independence remains elusive, the Keystone XL pipeline would help make North American oil independence conceivable.

Why are two in ten Americans against the pipeline?

Opposition to the pipeline has three main themes. First, some oppose the pipeline because of climate concerns. The process of extracting oil sands crude – a mixture including low-grade petroleum known as bitumen –gobbles up much more energy than the process of conventional oil drilling. So it emits more greenhouse gases. Second, some people fear pipeline leaks, either near the vast Ogallala Aquifer in the Great Plains or in rivers that must be crossed. And third, some people – many on ranches and farms – oppose the use or threat of eminent domain to force them to sign deals with the pipeline builder and owner, TransCanada.

What are the environmental downsides?

In addition to those environmental issues, the pipeline is being built to provide outlets for oil from the oil sands in Alberta. Half of the oil sands are produced by a process that is akin to strip mining. Trees in Alberta’s vast boreal forest are cut down, wetlands and topsoil are peeled back, and black sands are taken by gigantic dump trucks to facilities that mix the sands with warm water to separate out the useful bitumen. The other half of the oil sands are produced by injecting steam in the ground and sucking up the petroleum. Alberta is vast, but visiting the big mining and drilling sites still makes quite an impression.

The pipeline itself would have no significant environmental impact – unless it leaks. The company has tried to address those concerns by saying it would drill deep below rivers and by making the pipe extra thick in some places. And it has sensors that alert TransCanada’s computer-monitoring center, in Calgary.

Why do some believe that tapping sands oil is ethically better than helping the economies of Saudi Arabia and Venezuela?

One key argument in favor of the pipeline is that it would bring the United States greater energy and national security. Many proponents say the United States would be more secure importing oil from Canada — a democratic, stable ally — than from Venezuela or the kingdom of Saudi Arabia. The late Venezuelan president Hugo Chavez was no great friend of the United States but much of Venezuela’s crude oil is also low quality, like Alberta’s, and Venezuela has been a major supplier to the U.S. refineries. So it might be more of an ethical issue. Would we rather buy from a democracy, or an Islamic state run by a royal family or from a country run by the heirs of the fiery populist ruler Chavez?

What will happen if the pipeline is rejected by Congress and the President?

Good question. One possibility is that TransCanada might file suit saying that the process was improper. But it is more likely that TransCanada would look to alternatives, most likely a line to Canada’s east coast and eastern markets. In addition, railways would step up efforts to add tank cars and tracks as they have done in North Dakota already. Foes of the pipeline hope rejection of the permit will slow down development of the oil sands, but the State Department’s new environmental impact statement issued in March says the oil sands crude will find one way or another to get to the Gulf Coast refineries.

Tell us a little about the effects of the project on the Native American cultures of the proposed area.

Many Native American tribes, especially in Oklahoma, have no problem with the pipeline. In Oklahoma, formerly called the Indian Territory, people have not been strangers to oil booms. But some Native Americans and their tribal leaders are bothered by the thought that the pipeline might inadvertently disturb ancient burial sites or other sacred grounds.  Indeed the pipeline’s route from Niobrara River in northern Nebraska to northern Oklahoma follows almost exactly the route, or Trail of Tears, that the Ponca Tribe followed when forced to move in the 1800s. In South Dakota, Native American tribes have also been outspoken, saying that the Keystone XL crosses treaty lands. The pipeline would narrowly miss the state’s reservations. But it has unearthed more than a century of mistrust and grievance among Native Americans.