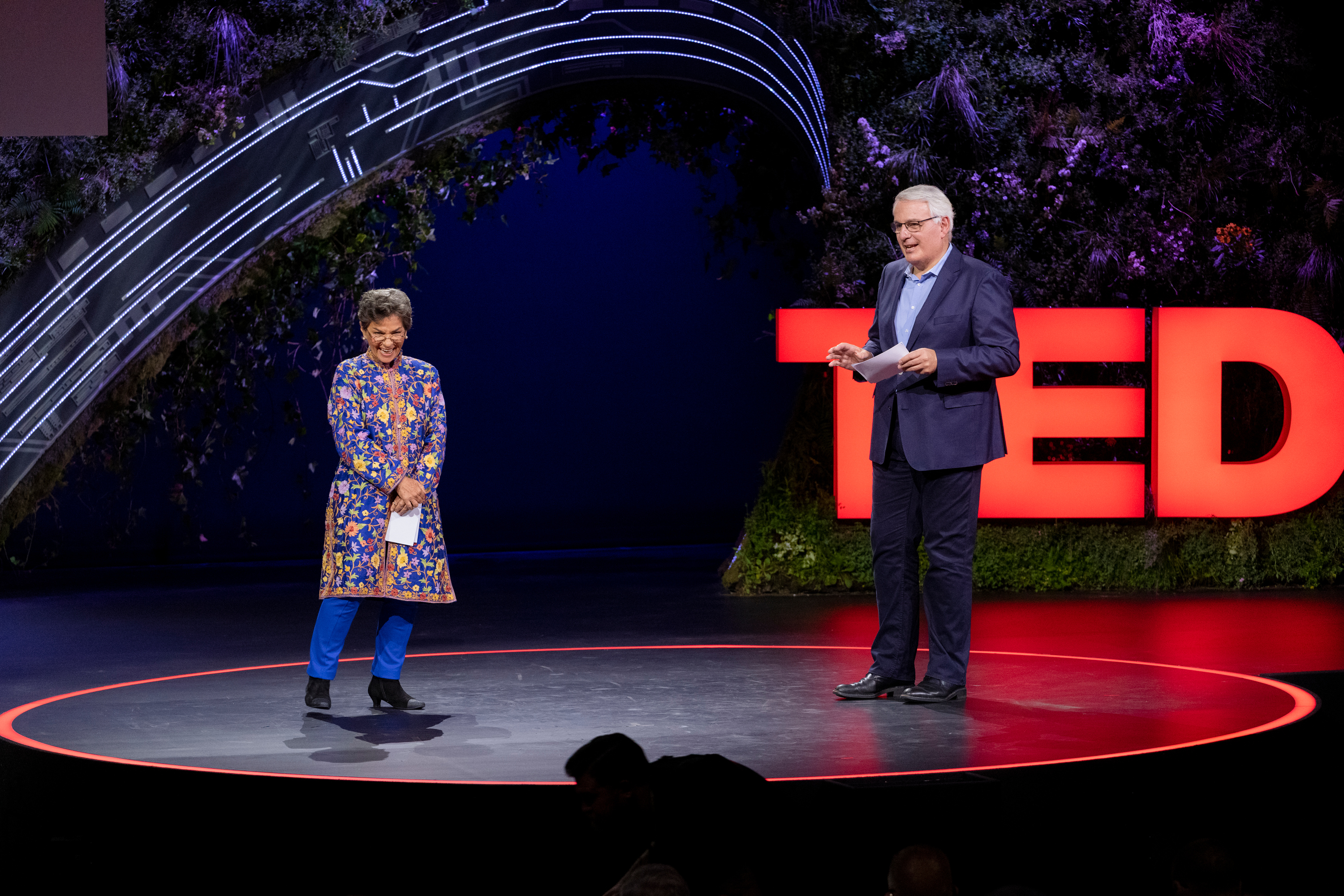 At Session 2 of the Countdown Summit, seven speakers stretched our imaginations — envisioning what it will take to create a different, better future and exactly how far (or close) we are from realizing it.

Big idea: To really power our grid from clean energy, we must build more production capacity than we think we need — a lot more. Although many estimates show that we need two and a half times more green production than we currently have, Solomon Goldstein-Rose says we need five times that: a grand total of 12 times today’s clean energy production. Where can we get all this power?

An answer: To go net-negative (not net-zero), to electrify everything with renewables in all parts of the world (not just the wealthy ones) and to power things that can’t be electrified (like airplanes), climate author Solomon Goldstein-Rose affirms that we need more than a green revolution in production. To get where we need to go, the world needs an entirely new electricity grid. As he puts it, we should be “building new things that we’ve barely ever built before, in massive amounts, to create a new system entirely.” Although it’s a tall order, the benefits of such a transformation go far beyond survival: if we can reimagine our power production, we will also create a healthier, cleaner and more prosperous world for everyone. 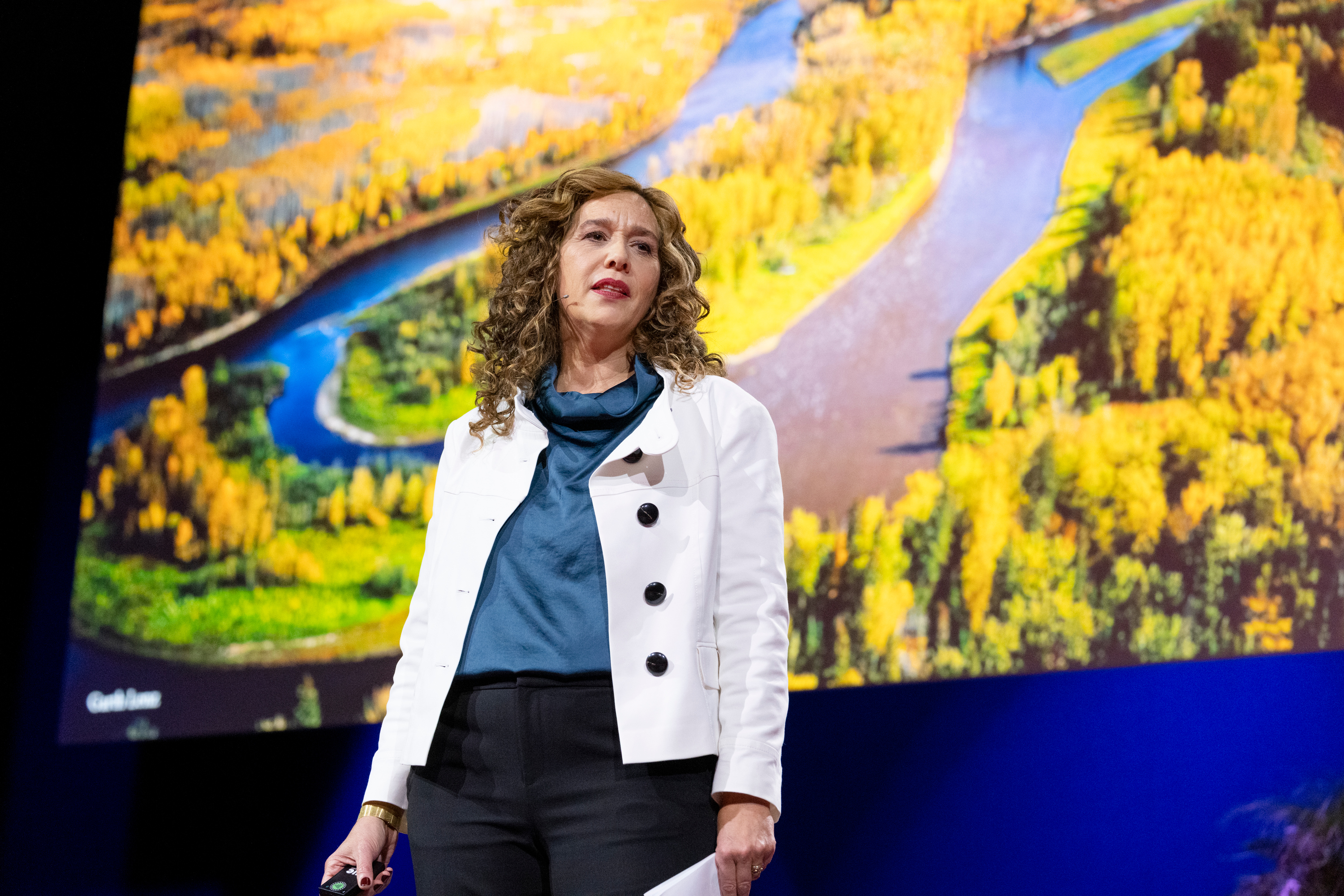 Tzeporah Berman makes the case for a fossil fuel non-proliferation treaty to stop all new exploration of oil and gas. She speaks at Session 2 of the TED Countdown Summit on October 13, 2021 in Edinburgh, Scotland. (Photo: Bret Hartman / TED)

Big Idea: The fossil fuel industry has gone largely unregulated. It’s time to wind down its rampant production with a fossil fuel non-proliferation treaty for the future of our planet.

How? As climate policy experts negotiate policies set to reduce carbon emissions, the fossil fuel industry continues to grow and pollute for the sake of oil, gas and coal, says environmental campaigner Tzeporah Berman. “Our governments are only regulating emissions and not production of fossil fuels,” she says. As a decades-long advocate for the protection of Canada’s Great Northern Forest, Berman has spent years reaching out to CEOs of oil companies and studying climate policies and has come to a crucial conclusion: without a single mention of “fossil fuels” in the 2015 Paris Agreement, fossil fuel production has escaped regulation. “We are currently on track today to produce 120 percent more fossil fuels in the next decade than the world should burn to stay below 1.5 degrees,” she says. It’s time to stop relying on future technologies that are not yet at scale to solve the problems we’re facing today and begin curbing destructive processes now. The Fossil Fuel Non-Proliferation Treaty can help us get there.

Dan Jørgensen, Minister for Climate, Energy and Utilities of Denmark

Big idea: Wind energy will be the cornerstone of the green transformation the world needs.

How? Over the last two decades, the wind energy industry has grown at a dizzying pace. (Fun fact: one wind turbine’s single rotation generates enough electricity to charge 1,314 cell phones.) Building off of this exponential growth, Dan Jørgensen, Denmark’s Minister for Climate, Energy and Utilities, lays out his country’s decision to cut 70 percent of its emissions by 2030 and close down the nation’s oil industry by 2050. Their aim is to direct all investment and innovation towards a fossil-free future and create the world’s first “energy islands”:” think scaled-up wind farms that can generate enough electricity for 10 million European households. Offshore wind power could supply the world’s entire electricity demand 18 times over, Jørgensen says, making it a true game-changer in the fight against climate change. 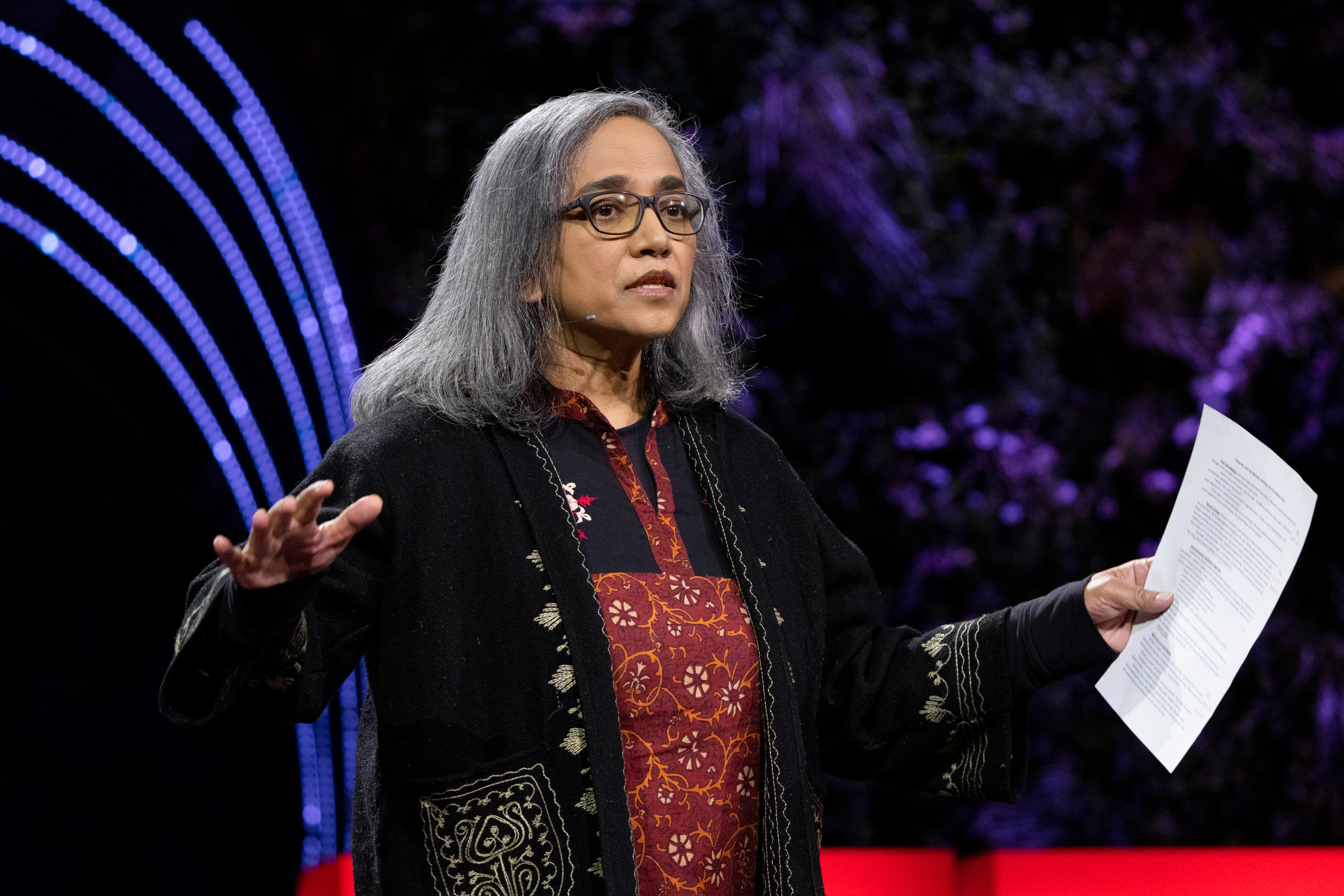 Big idea: Science and speculative fiction can support new narratives about our climate future — and inspire action instead of dread.

How? Earlier this year, Countdown partnered with the Center for Science and the Imagination at Arizona State University and to create the Climate Imagination Fellowship. In collaboration with ClimateWorks and the United Nations, the fellowship aims to support visionary thinkers who engage with the climate crisis by imagining vibrant futures. Speculative fiction writer and physics professor Vandana Singh is one of four inaugural Climate Imagination Fellows. On the TED stage, she shares an excerpt from her latest work: a captivating tale of how collective dreaming could help humans recognize our interdependence with the planet — and take action to protect it.

Big idea: As a diver in the 1970s, Enric Sala saw once-lush oceanscapes reduced to underwater deserts — but later, in marine preserves like the Medes Islands in Spain and Cabo Pulmo in Mexico, he also witnessed the ocean’s power to rejuvenate itself when left to its own natural devices. Could “rewilding” the planet help us restore biodiversity and reduce the impacts of climate change?

How? Marine preserves demonstrate how quickly the environment — land or sea — can rebound from the ravages of overuse and global warming. Trees, grasslands, kelp forests and the biodiversity they shelter are our best weapons against climate change, says marine ecologist Enric Sala — but only work if we allow them to do their work undisturbed by human activity. At present, only seven percent of Earth’s oceans and less than a fifth of land are protected as wilderness. In 2018, Sala and his colleagues at National Geographic partnered with the Wyss Institute to target the biodiversity powerhouses most worth preserving, with the aim of “30 by 30”: rewilding 30 percent of the Earth’s surface and of the ocean floor by 2030.

Big Idea: An online, open-data platform to support and connect the global restoration movement can bring transparency to humanity’s footprint on the planet.

How? There are hundreds of thousands of local communities, Indigenous populations and more working to protect and revitalize nature — making connectivity between these efforts of utmost importance. Enter Restor, a powerful platform in development that ecosystem ecology professor Thomas Crowther describes as “a Google Maps for restoration.” With about 72,000 sites in its database, Restor holds information about thousands of projects around the world, across every imaginable ecosystem, available to explore, learn about and connect with. Crowther gives a tour of this incredible tool, showing how you can learn about native species, environmental conditions and geology to try and predict information about local ecologies. And he shares his vision for the future of Restor and a world where, thanks to data collection, supply chains become so transparent that consumers can know the exact environmental impact of products before they ever leave the store. 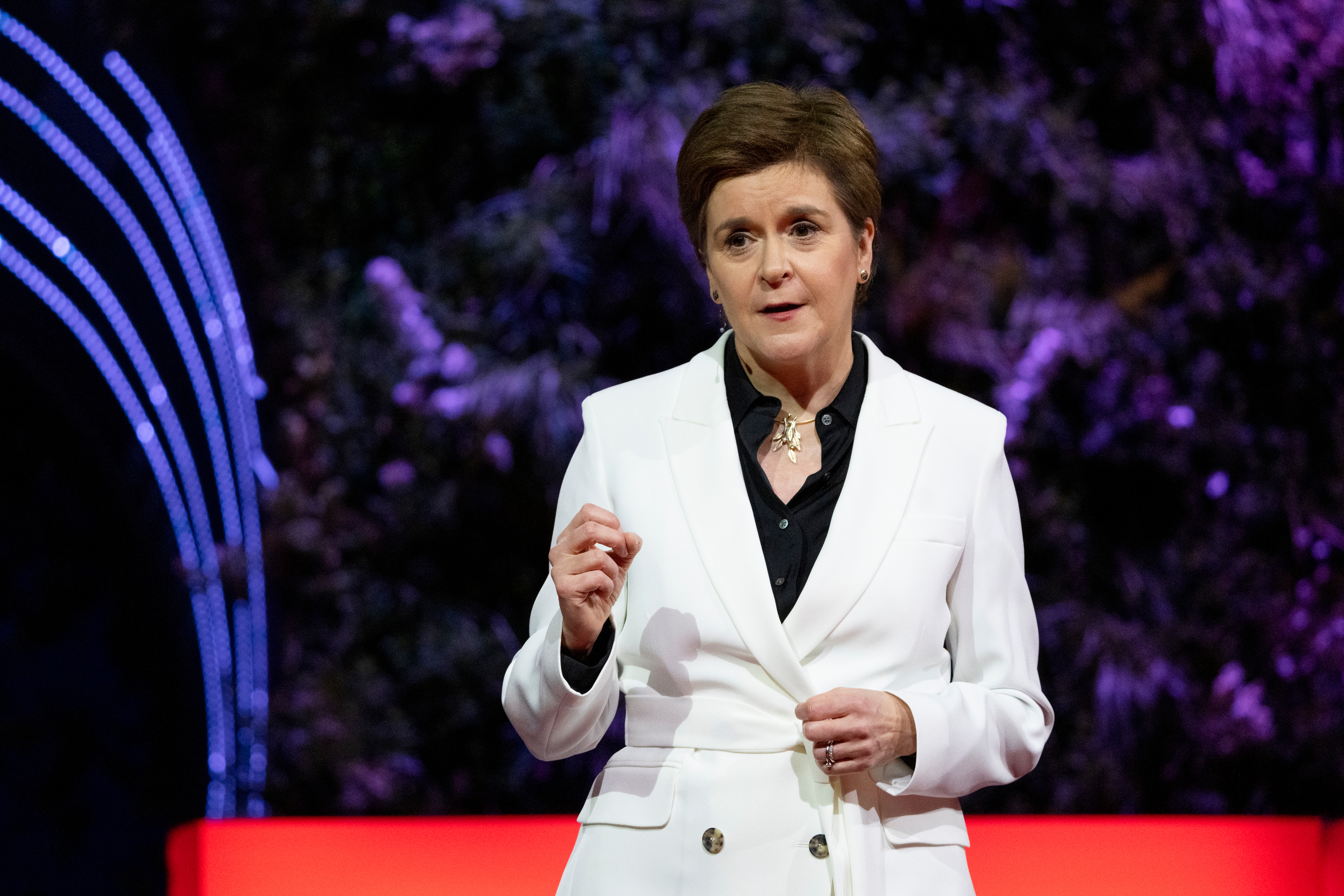 Big idea: When we talk about tackling climate change, it’s often about bigger countries like the US or China. We must recognize the ambition, leadership and action of small countries, too.

Why? Small countries have no time for small objectives, says First Minister of Scotland Nicola Sturgeon. For example, countries like Himalayan nation of Bhutan are leading the way towards a positive climate future, with 130 countries now following in its footsteps towards carbon neutrality; or the tiny island nation of Fiji, which played host the UN climate conference in 2017. Scotland has a special responsibility, considering its rich industrial history, to offset its disproportionate contributions to climate change. And it’s already made big steps, Sturgeon says, like decarbonizing faster than any other G20 nation and establishing a climate justice fund. When large countries fail to act, it’s the smaller regions, states and nations that keep the climate action momentum going — but that can’t always be the case. Countries of all shapes and sizes must step up to the challenge. “We cannot allow our size to be something that we hide behind when it comes to tackling climate change,” she says. “We must think big in our ambition. We must act big in what we do, and we must be big when it comes to the impact we make.”