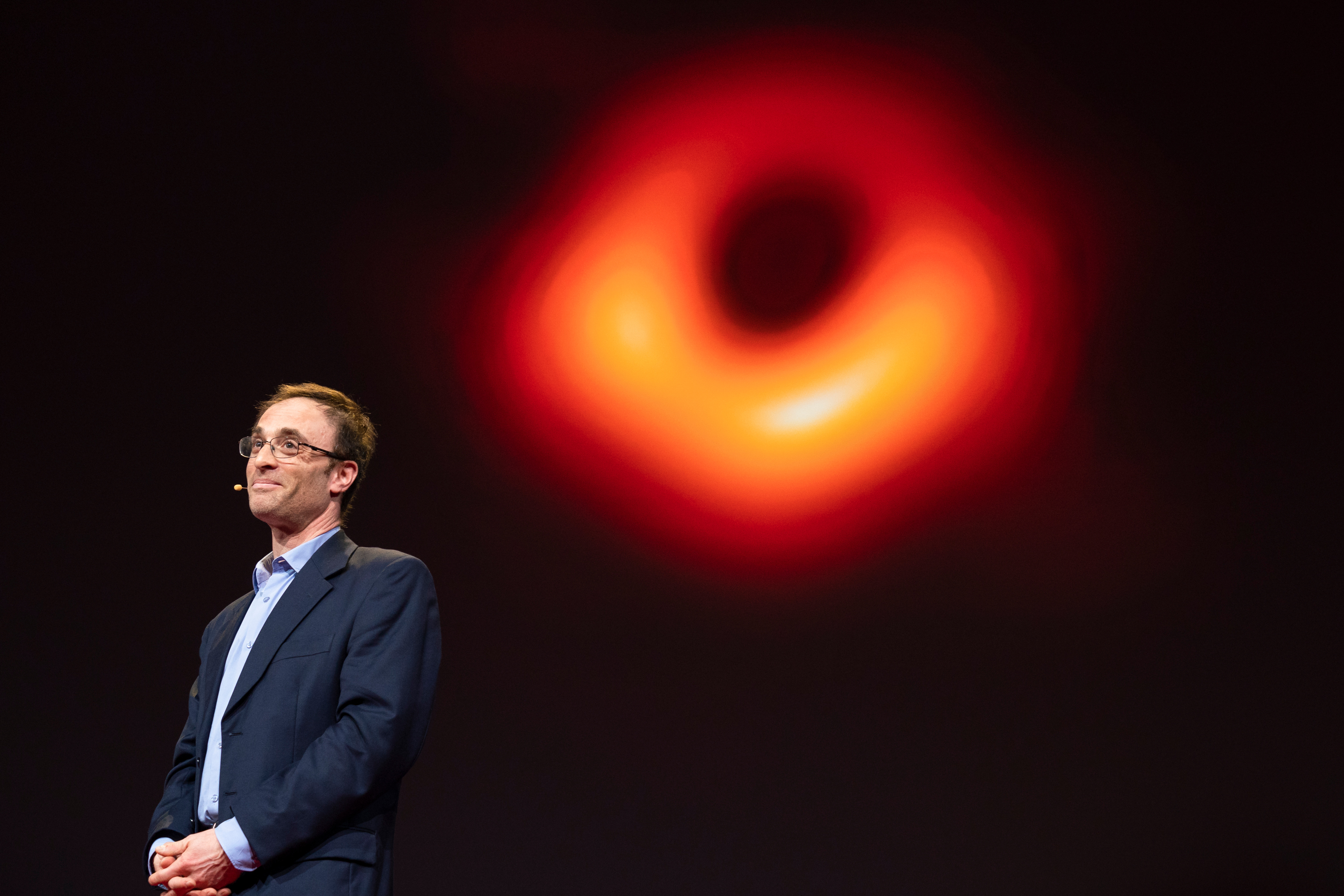 Sheperd Doeleman, head of the Event Horizon Telescope, shares how the international collaboration helped us see the unseeable. He speaks at TED2019: Bigger Than Us, on April 15, 2019 in Vancouver, BC, Canada. (Photo: Bret Hartman / TED)

The theme of TED2019 is “Bigger than us,” and day 1 did not disappoint. Even though it had just three sessions, they were chock full of compelling ideas and calls for action. Here are seven takeaways:

We’re shining light into some really dark places. Sheperd Doeleman, head of the Event Horizon Telescope collaboration, takes us inside the new (and iconic) black hole image and the epic effort involved in making it. The petabytes (1 petabyte = 1 million GB) of data that were used to construct the image came from a network of telescopes operated by 200 people in 60 countries who, he says, “effortlessly sidestepped the issues that divide us.” (Here’s a thought: Let’s get competing political candidates to work on science projects … together!) And two TED Fellows showed documentary projects that exposed hidden truths: Taghi Amirani shares footage from his just-finished Coup 53, which reveals the British and American conspiracy that overthrew the Iranian government in 1953 and shaped the country’s fate (and his family’s), while Nanfu Wang speaks about One Child Nation, her film about the traumas caused by China’s one-child policy.

And some places still need illumination. British journalist Carole Cadwalladr describes her investigation into the Facebook ads that targeted people with lies prior to the 2016 Brexit vote, but most of the evidence of what occurred remains locked in the “black boxes” of Facebook, Google and Twitter. She urges them to release their data, saying: “It’s a crime scene, and you have the evidence.” Writer Baratunde Thurston shares examples of people in the US who had the police called on them because they were “living while black” — when they went to a swimming pool, donated food to the homeless or played golf, “concerned” observers phoned 911 to report them. Systemic racism underlies these 911 calls, and even though changing it may sound impossible, Thurston has hope. He believes that if we can see the humanity of people targeted by racism, we can change our actions; when we change our actions, we change the story; and when we change the story, we can change the system.

The words we use matter. We’re living in polarizing times, and many fractures occur during our conversations. By tweaking what we say, political pollster Frank Luntz shows how to keep our discussions open and respectful. One standout from his suggestions: instead of saying the passive “I’m listening,” try the active, empathic “I get it.”

Businesses need to look beyond balance sheets and focus on their people. TED Fellow Jess Kutch created coworker.org, a platform that helps employees organize. While it tends to scare executives, Kutch says corporate leaders should view organizing as a positive — it’s what she calls “productive conflict,” offering “an opportunity to build a better workplace, a stronger business and an economy that works for all of us.” (Besides, she notes, the people most passionate about changing their workplace tend to be the people who love their workplace the most.) … Creating a company that puts employees first is part of what Chobani founder Hamdi Ulukaya calls his “anti-CEO playbook.” Other actions in his playbook: Asking communities what they need instead of demanding tax breaks and concessions from them; being accountable to one’s customers rather than one’s shareholders; and taking sides on political issues — because, he says, businesses should use their power to make a difference.

Ethics shouldn’t be an afterthought. While Cadwalladr calls out the tech giants and Ulukaya calls for humanity in business, a slew of TED Fellows echo the theme of responsibility. MIT researcher Arnav Kapur demos a technology that can communicate a person’s thoughts — but he stressed it’s not mind reading. It picks up only “deliberate speech” while “control resides with the user.” … Cofounder and executive director of The Good Food Institute Bruce Friedrich says humans have a responsibility to the earth not to tax it with the consequences of meat consumption. He’s championing research and investment into plant-based and cell-based meat. … Finally, astrodynamicist Moriba Jah speaks about our planet’s responsibility to, well, the rest of the universe. There are more than 500,000 objects in space put there by humans — “most of us what we launch never comes back,” he says. The world’s nations should pool their efforts and data to track the trash.

Music can be used to teach history and biology. Teachers might want to take a lesson from these TED Fellows. Amma Ghartey-Tagoe Kootin shares a rousing excerpt from her in-progress musical At Buffalo, which examines black identity through the events of the 1901 World’s Fair in Buffalo, New York. And biologist Danielle N. Lee led the crowd in a version of Naughty by Nature’s “O.P.P.” to illustrate the concept of “extra-pair copulation.” (Trust us — it was amazing.)

Fishing cats are the cutest cat you’ve never heard of. Oh yes, they are.

That concludes this highly abbreviated rundown of the day’s doings, which also included walking Easter Island statues, innovative ways of creating new medications, a Kenyan music festival with the winning name of “Blankets and Wine” (sign us up!), an astrophysicist who is taking how she studies stellar explosions and applying them to city lights and the criminal justice system, restoring the Maldives with canvas “bladders,” spoken word from the sublime Sarah Kay and Marc Bamuthi Joseph, and much more.