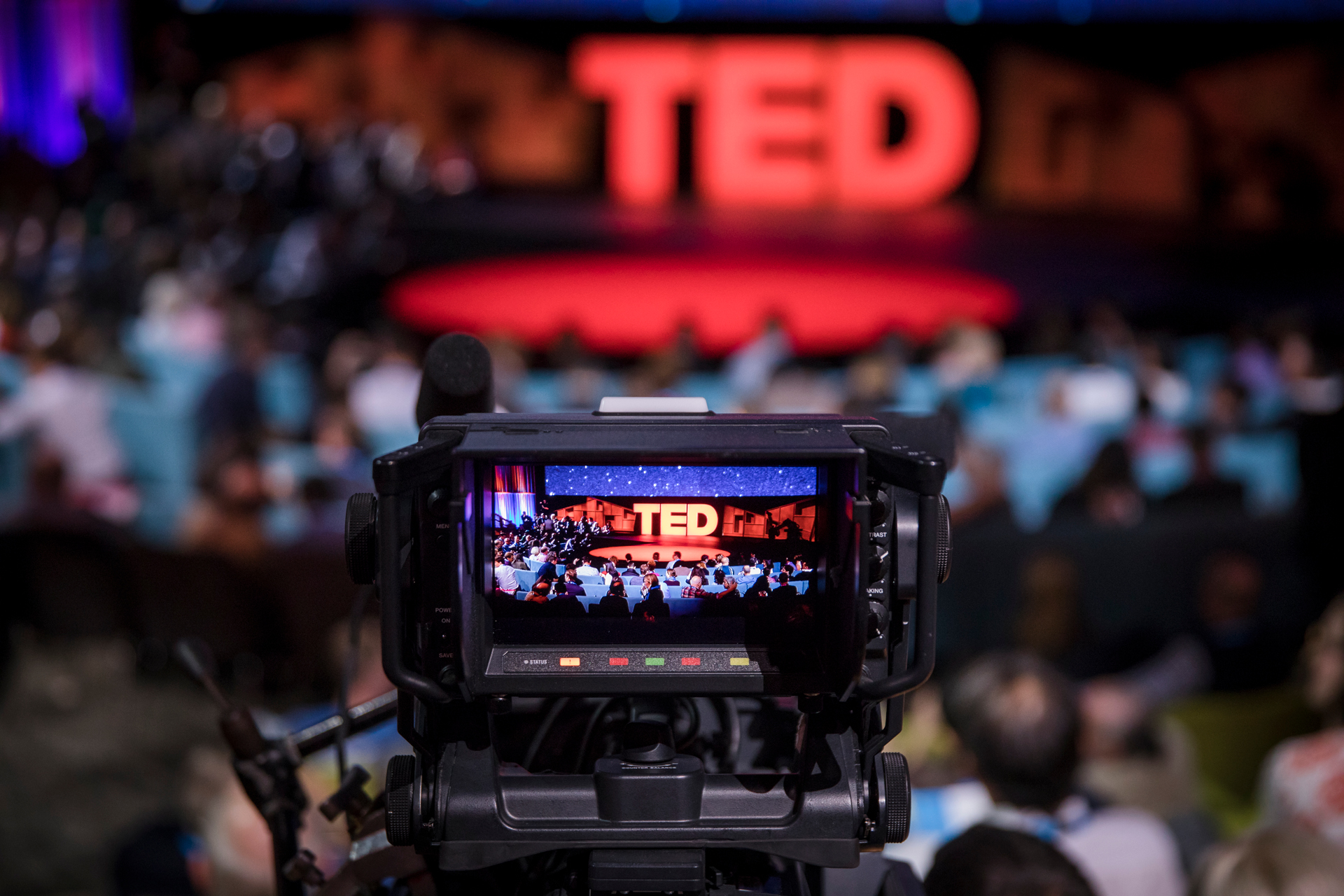 The third day of TED brought a slew of powerhouse talks — and one vibrant debate. Photo: Marla Aufmuth / TED

On day three of TED2017, we got an exploration of the mind, new ideas on climate change and thoughts on how our world is hyper global and at the same time hyper local. Below, some highlights.

Perception is a hallucination. Surprise! In Session 4, Anil Seth made a convincing case that we’re hallucinating all the time. In a delightfully disorienting talk, he explained how our minds are constantly making “best guesses” between sensory signals and prior experiences, then updating with new information. “It’s just that when we agree about our hallucinations, that’s what we call ‘reality,’” he said.

Redefining home around core values. Devita Davison, dismayed by the fact that many Detroiters live closer to a fast food restaurant than a supermarket, walked us through some organizations promoting urban agriculture in the city, to ensure that everyone has access to healthy food. Grace Kim sung the praises of co-housing, a system where neighbors share spaces and lives. This fights back against isolation, and creates neighborhoods founded on mutual care, she said. Then in one of the most powerful talks of the day, Luma Mufleh, a Jordanian immigrant of Syrian descent, shared how she became a soccer coach for young refugees in Atlanta after running across a group of kids playing barefoot, with rocks as goals. She formed a team that supports players from war-torn nations, affirming their basic humanity as they make new homes. “What I get to see every day is their hope, resilience, determination, love of life and appreciation for being able to rebuild their lives,” she said.

A live experiment. Dan Ariely and Mariano Sigman woke us up this morning by having us participate in an impromptu experiment. They asked us consider two morally ambiguous scenarios — then discuss them in random groups. They suspect that conversation might have effect on how people think about these kinds of questions. While their research won’t be available for a bit, they wanted us to do this to make a key point: “Experiments are an admission of how little we know.” 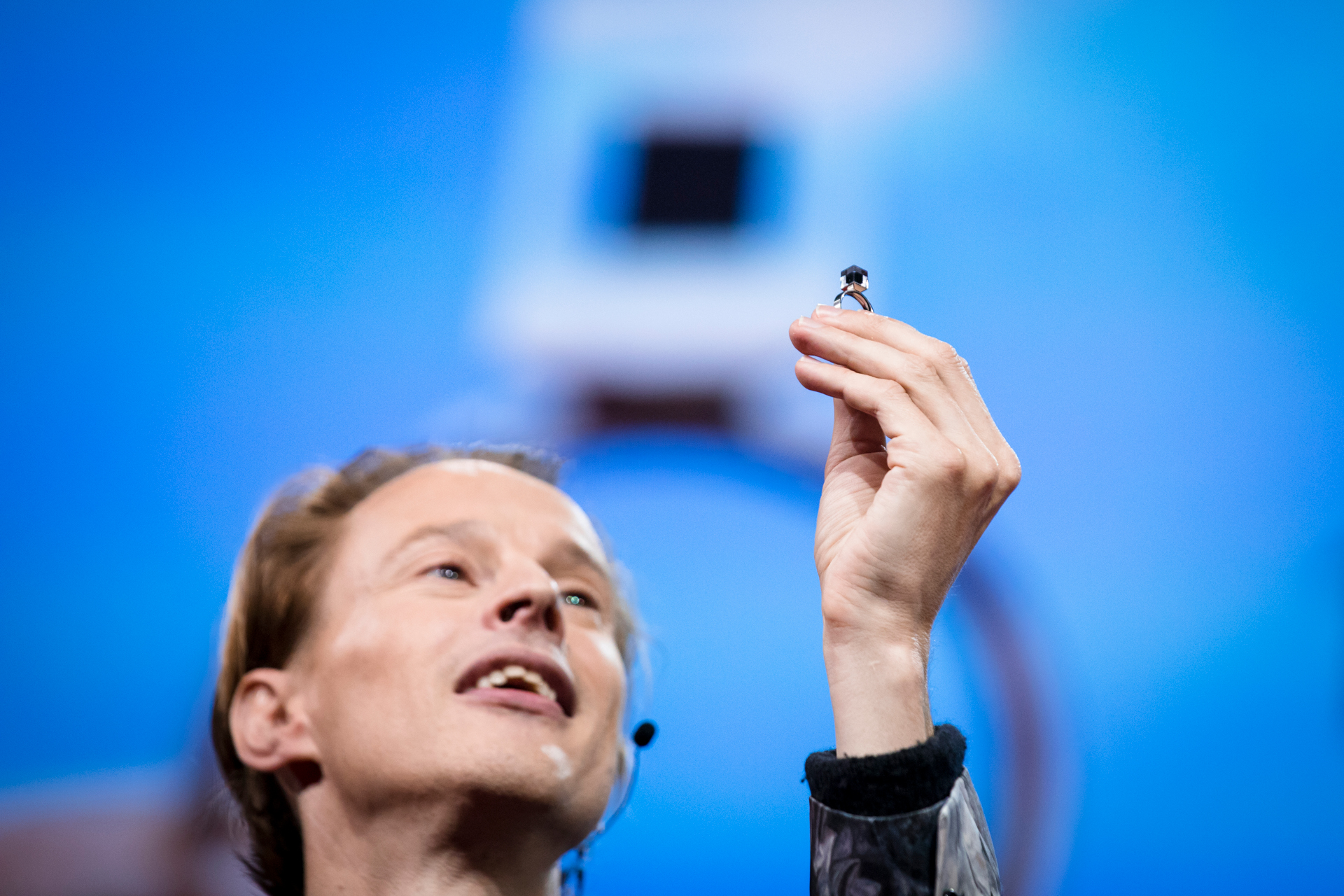 Daan Roosegaarde shows a ring made from the waste of Beijing smog. Photo: Bret Hartman / TED

The smog ring and “yes, but” chair. Daan Roosegaarde made a smog vacuum that cleans local parks in Beijing — then turns the waste into diamond-like rings. In an ode to hope and creativity in a session with sobering warnings on climate change, he said, “If we implement that kind of thinking, there’s a whole new world to be explored.” For anyone opposed, he had a surprise: a chair with voice recognition software that shocks anyone who says, “yes, but….” Because it’s a phrase guilty of killing many a good idea too soon.

In algorithms we shouldn’t trust. “Algorithms are opinions embedded in code,” warned Cathy O’Neil in a blistering talk. We accept algorithms as truth — even when we have no idea what they’re based on. And that’s a big problem, since they’re determining who gets released from prison, who loses their job and so much more. It’s a fascinating call to demand transparency in algorithms.

Geoengineering — yay or nay? TED attendees got a front-row seat for a debate on geoengineering. Danny Hillis proposed that we explore solar geoengineering to mitigate against rising global temperatures. He explained that, as agents of climate change, humans are already geoengineering. Climate scientist Kate Marvel stepped onstage to voice her concerns, saying, “I feel like what you are proposing is involving all of us as your human subjects, and I’m not sure I consent to that.” Tim Kruger introduced a process to break down limestone into lime and CO2 — the CO2 can be stored underground, while the lime can be used in seawater to counter ocean acidification. Finally Al Gore expressed skepticism. “We have to stop the pattern of behavior that’s creating this crisis,” he said. Despite these different takes, one message was clear: We need scientific research if we are to stand a chance.

Hard things? You can prepare for them. Anika Paulson found that a funny thing prepared her to weather the transition from high school to college — the fact that she’d been studying music theory. Neuroscientist Lisa Genova dropped the unsettling news that the plaque buildup in the brain believed to cause Alzheimer’s disease begins as early as age 40 — but that we can make ourselves more resilient to its effects by learning new things. And meteorologist David Titley pointed to the military adage that the time to prepare is before a crisis — and asked us to think this way about climate change, as rising sea levels mean that even small storms can devastate.

Even if you missed today, you can be part of the TED2017 excitement. Watch a Highlights Exclusive in movie theaters on Sunday, April 30 — it’s a ‘best of’ compilation of talks from the conference, edited on the spot this week, with behind-the-scenes footage. Find tickets at a cinema near you.