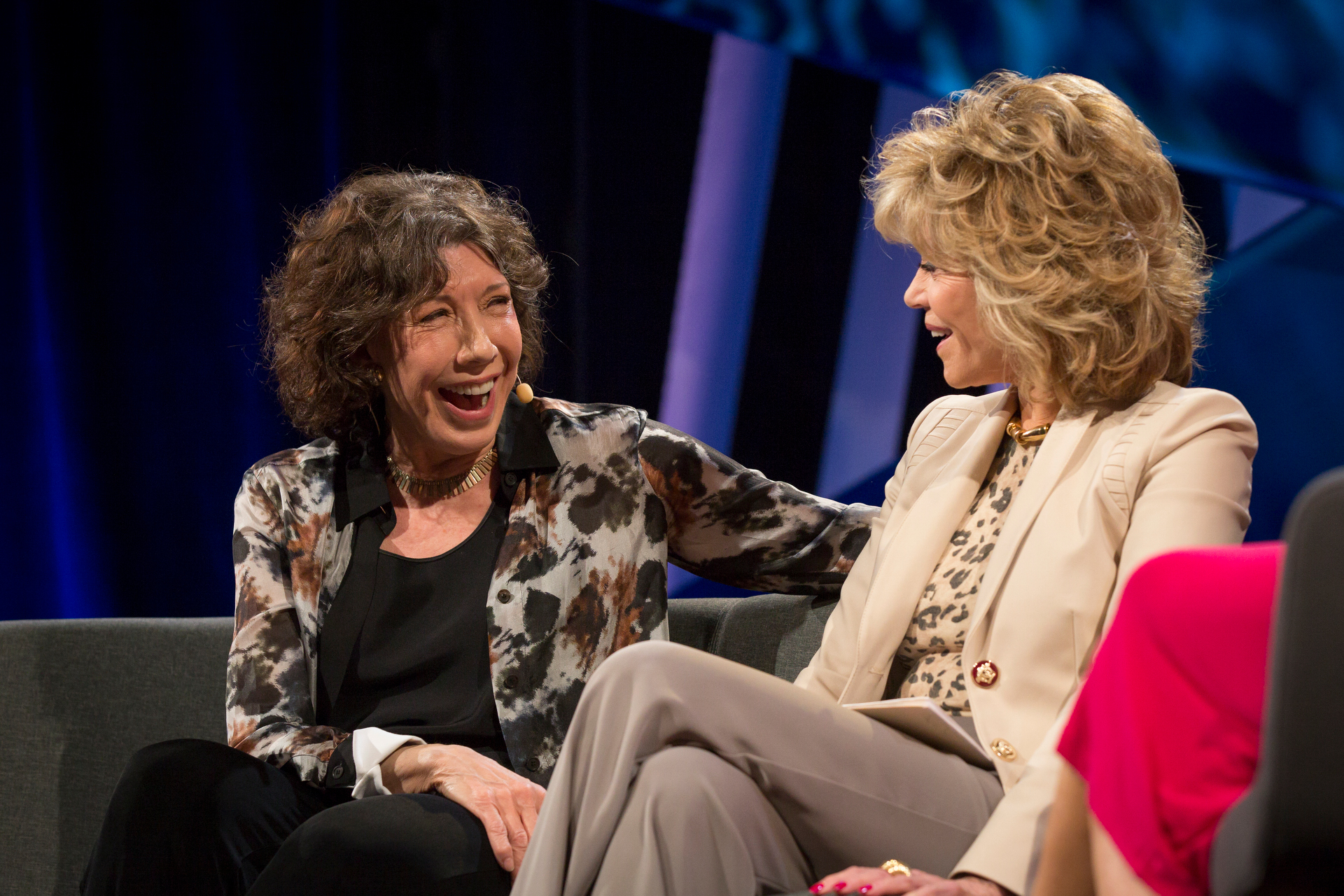 Lili Tomlin and Jane Fonda have a friendship that has spanned decades. In an interview with Pat Mitchell, they revealed what they look for in friends — and why female friendship is just so special. Photo: Marla Aufmuth/TED

Jane Fonda and Lily Tomlin have been friends since 9 to 5. And the pair walks onto the TEDWomen stage to talk about the importance of female friendship, the audience standing up to applaud as they take a seat on a couch.

“What do you look for in a friend?” asks host Pat Mitchell, kicking off the conversation.

“I look for someone who has a sense of fun,” says Tomlin. “Someone who’s audacious, who is forthcoming, who has politics, who has even a small scrap of passion for the planet. Someone who is decent, has a sense of justice, and thinks I’m worthwhile.”

Fonda’s eyes light up with a smile. “I don’t know what I would do without my women friends,” she says. “They make me stronger, smarter, braver.”

The two agree that keeping up with friends is a high priority in their lives. “I look through my emails to find my friends so I can answer them as quickly as possible. I know they need my counsel, my support,” she says, turning to Fonda. “Most of my friends are writers, actors, activists, a long string of other descriptive phrases. I want you to know I’m there for you.”

Tomlin shakes her head at her. “I spell out my words of happiness and congratulations and sadness.”

Both Fonda and Tomlin wonder if there’s a link between female friendship and health, and think it might just be the reason women tend to live longer than men.

“On 9 to 5, we laughed so much. We found we have so much in common. She’s Hollywood royalty. I’m a tough kid from Detroit. [Co-star Dolly Parton] is a southern kid from Tennessee. We were so in sync as women,” she says. “We laughed so much we probably added a decade to our lives.”

Fonda turns her attention to the different shades of female friendship. “There’s all kinds of friends. Business friends, party friends,” says Fonda. “Some friendships feel spiritual, because it’s a heart opening. We go deep. I find that I shed tears with my intimate friends, not because I’m sad, but because I’m so touched and inspired by them.”

“And you know one of you is going to go soon,” jokes Tomlin. Fonda slaps her leg.

Mitchell asks an interesting question: What are the differences between male and female friendship?

“I have a lot of empathy for men because they don’t have what we have,” says Fonda. “Women’s relationships, our full disclosure — it’s revelatory. We risk vulnerability. That is something that men don’t often do.”

She turns to Tomlin again. “How many times have I asked you, ‘Am I doing okay? Did I screw up?'” she says. “[Friends] tap me on the shoulder when I might be in need of course correction.”

The two talk for a moment about their Netflix show, Grace and Frankie. Fonda describes a favorite scene in an upcoming episode. “We’re having a girls’ night out — a night where we say ‘yes’ and can’t say ‘no’ to anything,” says Fonda. Fonda’s character comes down the stairs and sees Tomlin. She begins cooing over her, telling her all the little things she likes about how she looks. “You never see this in mass media — women just loving on and caring for each other.”

Fonda says, “Women’s friendships are like a renewable source of power.”

“How do we use the power?” asks Mitchell.

Fonda sits up just a little straighter. “Women are the fastest growing demographic in the world, especially older women,” she says. “If we harness our power, we can change the world. And guess what: we need to. We set the consumer standards, and we need to consume less. We need to buy things made locally … We need to get off the grid and make ourselves independent from fossil fuels.”

Fonda nods. “Gender equality is like a tide, it would raise all boats.”