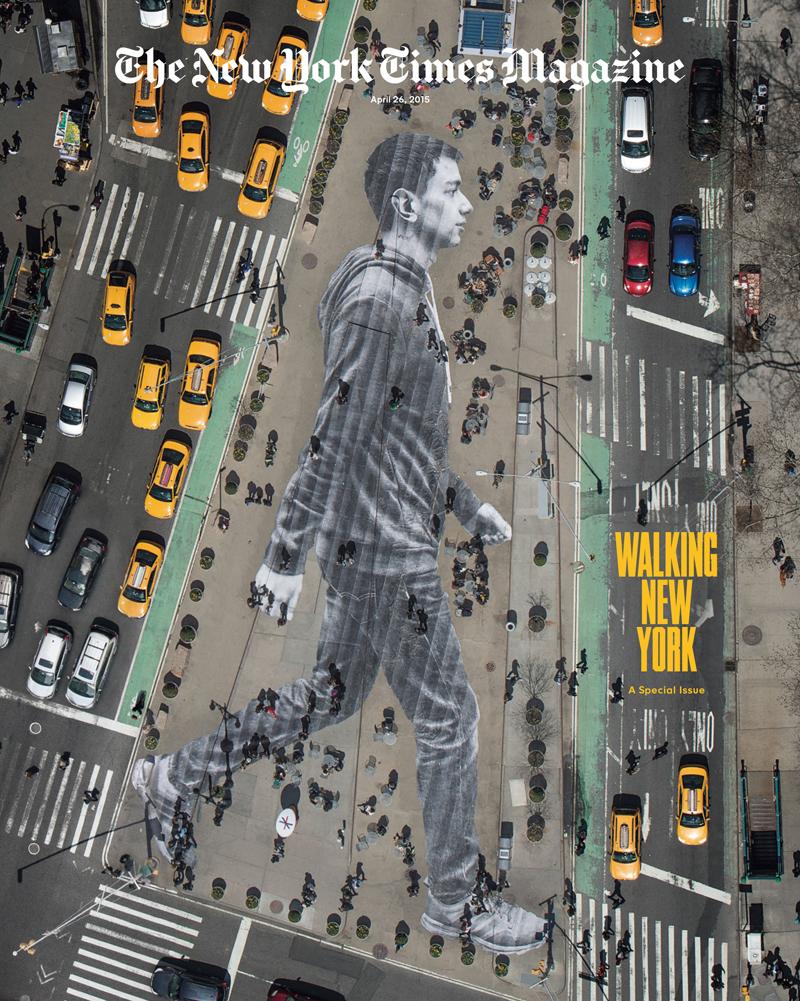 The image itself looks laid back enough — a 20-year-old man in a hoodie and jeans, walking through New York City. Except that this image is 150 feet tall and pasted on a plaza near the Flatiron Building. Cabs and cars flow around him while pedestrians scamper past.

This image, created by TED Prize winner JR, is on the cover of The New York Times Magazine’s “Walking New York” issue this week. For the issue, JR photographed 16 people who arrived in New York within the last 365 days. While living in New York part-time for the past four years, the artist has found himself intrigued with immigration and origins.

“The first question we ask you when you get to the city is where you’re from,” says JR. “That’s something really special. Where I come from in France, when someone asks you, ‘Oh, where are you from?’ people can take it the wrong way. People say: ‘What? Am I not French enough for you?’ Here, there’s not a sense of that. Everybody is from somewhere, and that’s the strength of the city.”

The man shown on the cover is Elmar Aliyev, a 20-year-old waiter who immigrated to the US from Azerbaijan last summer. JR loved his photograph because of the movement of his arms, according to a making-of story. His image was printed on 62 strips of paper, which took more than three hours to paste on the plaza. Because the image is abstract up close, and because passersby are free to step on it, it sends a powerful message — that like so many of New York’s 3.1 million immigrants, people pass by Aliyev without noticing him.

JR’s team started pasting the image on Flatiron plaza on April 11 starting at 4am. During the day, JR went up in a helicopter to photograph it from above. Later that night, the image was washed off the plaza.

But we will see more of it. On April 13, JR posted a photograph of himself and fellow TED speaker Chris Milk in the helicopter on Instagram. “Shooting my first Virtual Reality film with @zrichter and @chrismilk in New York,” he teased.

Stay tuned for more. In the meantime, enjoy these TED Talks from JR and Chris Milk: