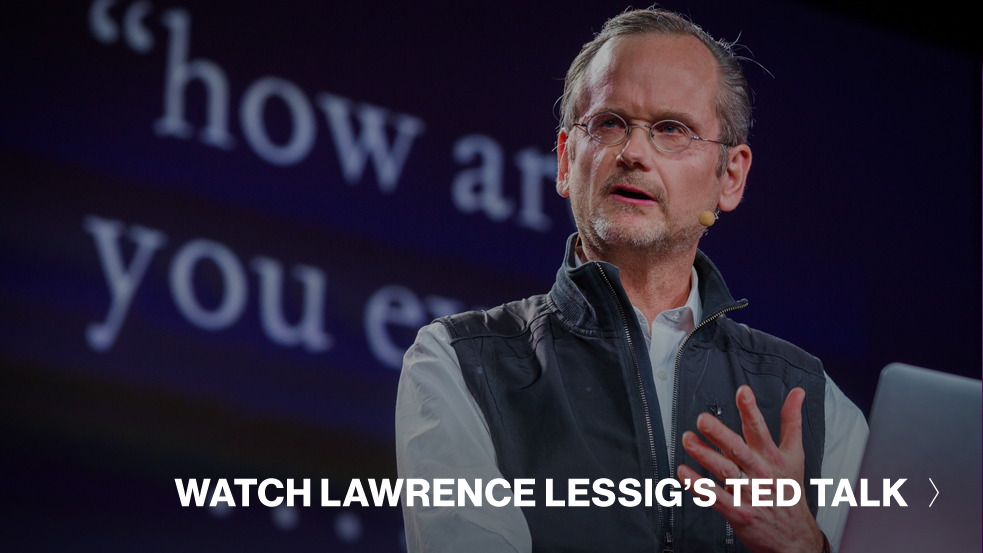 Lawrence Lessig may be running for President of the United States. But he isn’t looking to big donors to fund his exploratory campaign.

Rather than do the usual candidate song and dance of courting wealthy donors and corporations, Lessig is using the Kickstarter method for his campaign. He’s collecting small donations from individuals through his website, LessigforPresident.com. If he raises $1 million by Labor Day, he’ll run. If he doesn’t, he won’t (and will return the contributions).

This fundraising method is key, as he’s focusing on one issue: campaign finance reform. It’s the idea he spoke passionately about in his TED Talk, “We the People, and the Republic we must reclaim”: Because the American electoral system requires candidates to raise a huge amounts of money — from a slim percentage of citizens — politicians are beholden to donors, and not to the people. This representative democracy is intrinsically broken, he says.

“Maybe about .05% of the US population are relevant funders of campaigns … You spend 30 to 70% of your time calling these funders,” Lessig told CNN on Tuesday after announcing his campaign. “It develops in you a sixth sense, a constant awareness, of how what you do will affect your ability to raise money.”

Lessig, who created Creative Commons and his given four TED Talks, would have one goal as president: pass The Citizen Equality Act of 2017. It’s a piece of legislation designed to make all citizens equal in elections — to reform how campaigns are financed, to end gerrymandering and to make election days a national holiday so more people can vote. He would stay in office however long it takes to pass this bill. Then, he’d step down and let his vice president take over.

His point: the way elections are funded isn’t “just a detail,” but an essential, foundational issue.

Lessig tells the TED Blog that when he gave his barn-burner talk at TED2013, he never expected to run for office himself. But he couldn’t let the election season pass by. “This is an incredible moment. There’s a huge focus from both Republicans and Democrats. I wanted to use this opportunity to make some progress. I’m hopeful to leverage the attention,” he said. “If this isn’t resolved now, it’s going to become normal and it will be almost impossible to change.”

Since he announced his exploratory campaign Tuesday, he’s received $181,569 in donations from 2,191 donors — and has 26 days left to fundraise.

“It’s actually been received more positively than I was expecting,” he said. “I thought there’d be a lot more organized anger by people committed to other candidates, but it turns out that people who aren’t really committed to anyone are very excited. That makes me optimistic.”

The one thing that would lead him to drop his campaign? If another candidate picks up The Citizen Equality Act.

“This campaign is not about a person, it’s about a principle,” he said.