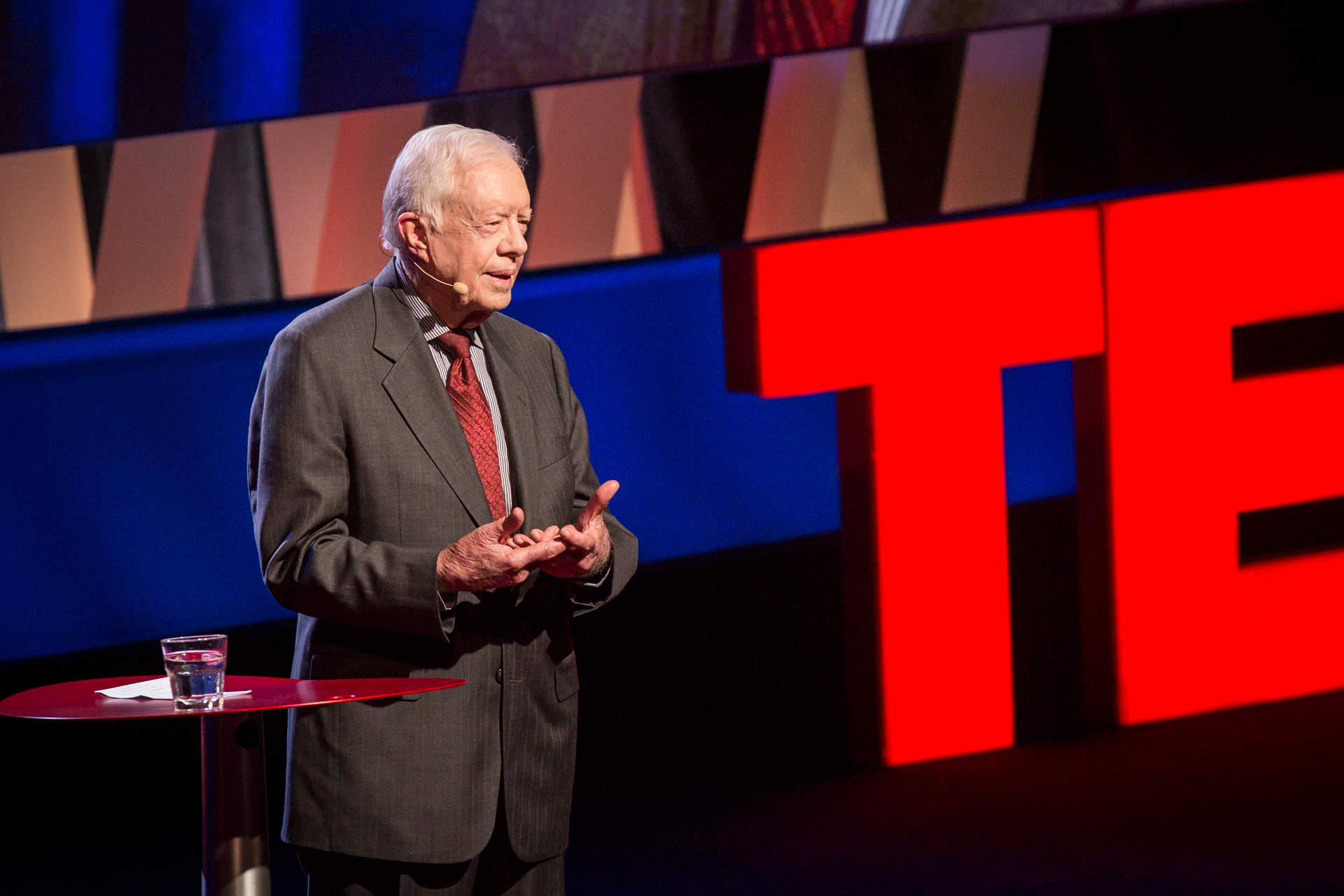 Former president Jimmy Carter is at TEDWomen for a reason. He says, “The number one abuse of human rights on earth is the mistreatment of women and girls.” Photo: Marla Aufmuth/TED

Momentum is great. But how do you sustain it? This session will examine what it takes to keep on keeping on, from speakers who are just starting out and those who’ve been at it for decades.

The number one abuse of human rights. Former president Jimmy Carter begins with jokes (looking out at the audience of mainly women, he muses, “I feel … a little bit different from most of you”), but he is here to talk about something serious. “The number one abuse of human rights on earth is the mistreatment of women and girls,” says Carter. He sees three things at the root of this. The first is the “misinterpretation of religious scriptures” by men, “to make sure that women are relegated to a secondary position.” This happens across religions, he points out. The second reason is the “excessive resorting to violence.” Around the globe, there are so many examples: genital mutilation, honor killings, human trafficking. But he spends a moment on a few in the United States: excessive imprisonment (“Since I left the White House, there has been an 800% increase in black women in prison”), the coverup of sexual assault in the military and at universities, and sexual slavery (“the sex trade in Atlanta, Georgia, exceeds the drug trade”). The final reason Carter points too is shockingly simple. “In general, men don’t give a damn,” he says. “The average man might say, ‘I’m against the abuse of women and girls,’ but quietly accepts the privileged position that they occupy.” So, what can be done? Speak up. “The best thing that we can do today is for women in powerful nations, like this one, who have influence and freedom of speech to take the responsibility to be more forceful and demanding.”

President Jimmy Carter wants women to know this about their role in shaping the future. #TEDWomen pic.twitter.com/rUtMfq3Nnq

Defiant education. Sakena Yacoobi is a force to be reckoned with. From a young age Yacoobi was determined to go to school in her native Afghanistan – but when she was accepted to a university that didn’t have girls’ dorms, her father sent her to the US. Meanwhile Afghanistan was invaded by Russia, and Yacoobi lost touch with her family. She eventually traveled to Pakistan to visit Afghan refugee camps, which were 90 percent women and children. What she found saddened her: Girls with nothing to do – no form of education or even entertainment – and boys as young as 10 forced to be the heads of their households. “My heart was beating for my people,” says Yacoobi. “I didn’t know what to do.” Yacoobi channeled her experiences with school, which had had such a profound effect on her confidence and agency. But: Education for girls had been banned in Afghanistan, so she had to work in secret. In one year, Yacoobi set up 25 schools and put 15,000 kids in school. Despite two dangerous encounters with the Taliban that would have had a normal person quivering in their boots, Yacoobi persists in her campaign to educate girls – and has even expanded to teaching men, starting with some of the Taliban members who challenged her along the way. 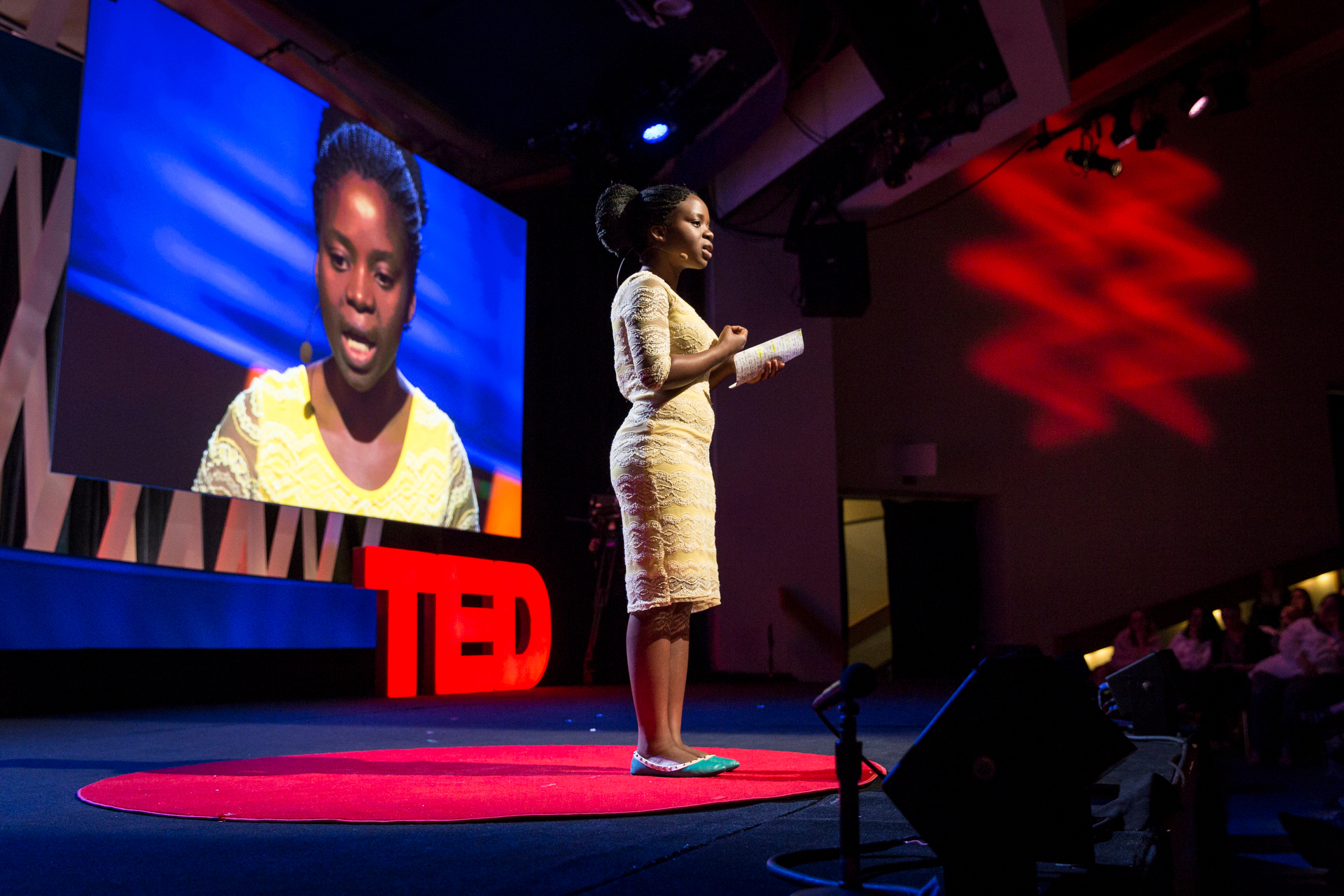 Memory Banda is only 18, but has already led a movement to end child marriage in Malawi that has changed laws — and is now changing hearts and minds. Photo: Marla Aufmuth/TED

“I will marry when I want.” Memory Banda reads a poem written by a 13-year-old friend: “My mother can’t force to marry/my father can’t force to marry.” This might seem obvious to someone in the West, but in Banda’s country of Malawi, it is a “warrior’s cry.” She tells the story of herself and her sister. Her sister got pregnant for the first time at 11, at an “initiation camp” where “you are taught how to sexually please a man” and that culminates in a culturally-condoned sexual assault. Banda, on the other hand, refused to go to the camp. “I said no because I knew where I was going … I imagined myself as a lawyer,” she says. “Other women came to me and said, ‘You are a stupid girl. You do not respect the traditions of our society.'” But Banda stood strong. She and other girls in her community asked their traditional leader to issue an edict that no girl must be married before turning 18. From there, they pushed to the national level. As a bill on child marriage was being voted on by Parliament, they stood outside, asking for support. “Now in Malawi, 18 is the legal marriage age,” says Banda. And still, the work is not done. She shares the next step: making sure this law is enforced. “This is a moment when millions of girls worldwide will be able to say, ‘I will marry when I want.'”

A declaration of sisterhood, womanhood. Gina Loring and Sunni Patterson, standing confidently side by side, calmly took in the audience. Then, Gina sang the opening lines of “Sweet Honey in the Rocks” in a light a capella style “We who believe in freedom cannot rest.” She then started a powerful spoken-word poem, taking on the collective persona of single mothers, past and present, “It is a labor: babies born of our day dreams. May they be safe. May they be strong. This is our song.” In a change of pace, Sunni began with, “We wanna bring black back. We wanna bring ancient thoughts to present thinkers so future generations can be healed.” Then, they both spoke of how women can uplight each other, “Leadeth me beside the still waters…wrap me in soil and let me feel the heartbeat of ancient rhythms beneath mother tongue melodies, each note drawing angels closer.” They ended with a joint harmonized medley of song and verse, “They could kill one human body, but I’ll see one billion rising.”

A legacy of equality. Tennis legend Billie Jean King sits down with Session 4 host Pat Mitchell to talk about her ongoing fight for gender equality. They cover her famous 1973 match against Bobby Riggs, the legacy of Title IX, the Billie Jean King Leadership Initiative and the generation gap between boomers and millennials. “My wish,” says King, “is for everyone to be their authentic self 24/7.” Read much more in a full recap of this talk »

Climate change is a human rights issue. Mary Robinson had to deal with many things as the first female president of Ireland from 1990 to 1997 — but “what I didn’t have to do as president was buy land on mainland Europe so that Irish citizens could go there because our island was going underwater,” she says. With climate change looming over us, not all leaders are so lucky. She directs our attention to President Anote Tong of Kiribati, whose island-chain nation may soon be completely underwater. “This was a problem no leader should have to face,” she says. “It’s unthinkable that a whole country could go out of existence because of human-induced climate change.” It’s a true injustice, she points out; the countries most affected by climate change often aren’t the ones doing the most damage. “Climate change is the greatest threat to human rights in the 21st century,” says Robsinson. “No country can immune itself from the dangers of climate change. This is an issue that requires complete human solidarity.” And with the UN Summit for Sustainable Development and the UN Climate Change Conference for a Universal Climate Agreement on the horizon, Robinson thinks that 2015 could turn out to be a pivotal year in humanity’s future on this front.

A closing opera. With a beautiful violin accompaniment, 14-year-old Sara Stevens strikes the moving first notes of an Italian opera song. Seamlessly gliding from high to low, she beautifully demonstrates the clarity, strength and stability of her young voice. Hitting and sustaining unbelievable pitches, she sang with elegance and poise. It was a wonderful way to close the last session of the night. 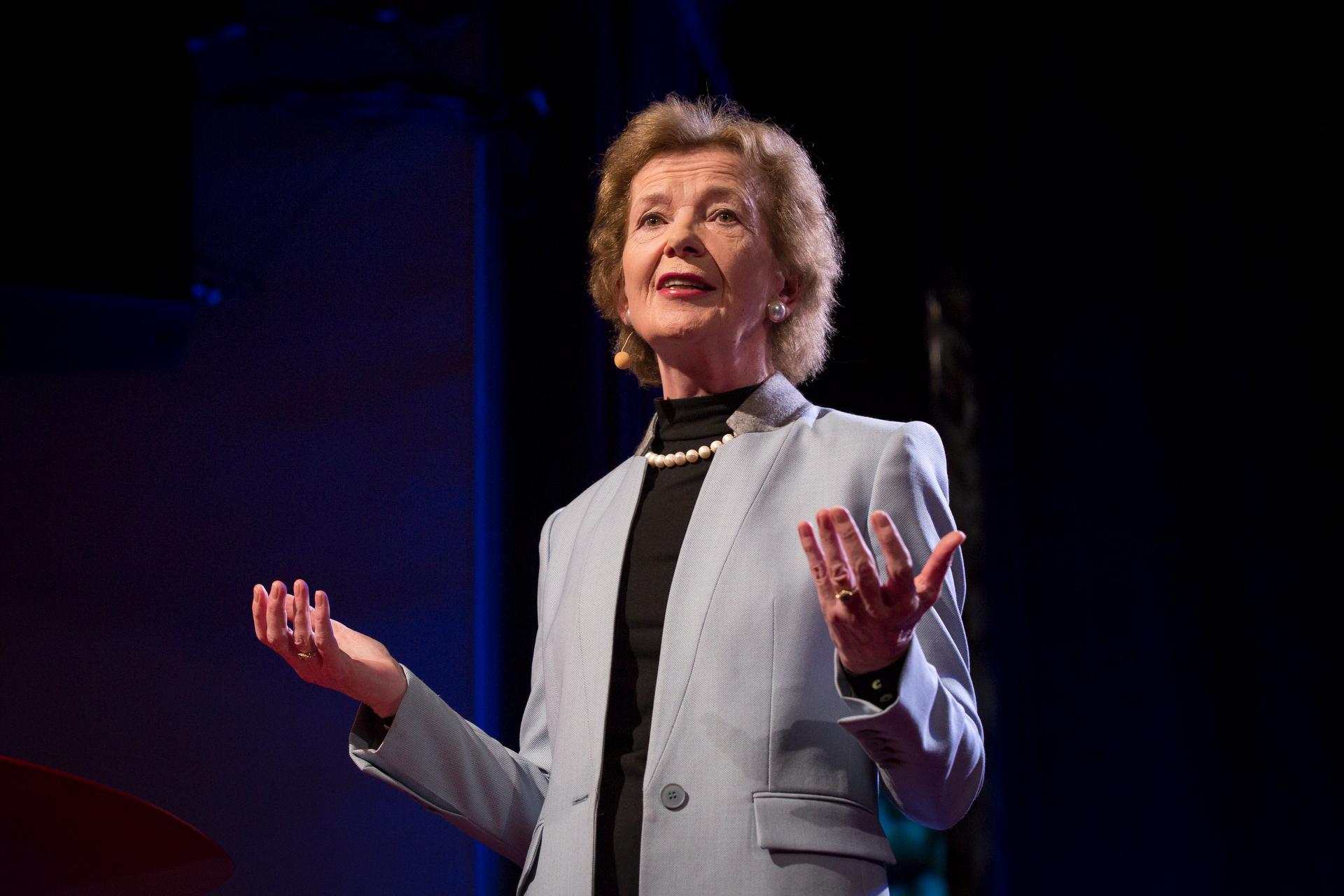 Mary Robinson, the first female president of Ireland, explains why she is passionate about climate change: because it is a human rights issue. Photo: Marla Aufmuth/TED