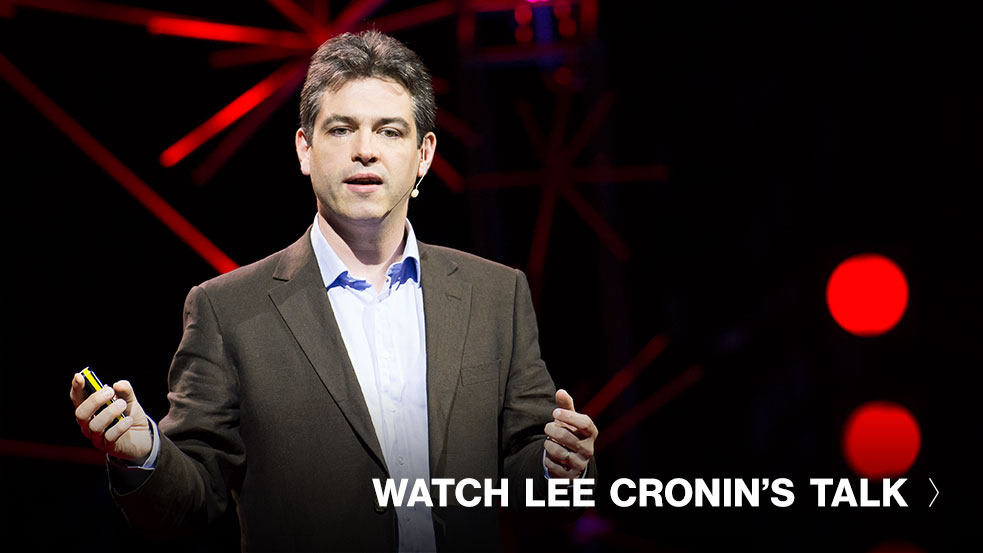 Print your own pharmaceutical factory. As part of an ongoing quest to make pharmaceuticals easier to manufacture, chemist Lee Cronin and his team at the University of Glasgow have designed a way to 3D-print a portable “factory” for the complicated and multi-step chemical reactions needed to create useful drugs. It’s a grouping of vessels about the size of water bottles; each vessel houses a different type of chemical reaction. Pharmacists or doctors could create specific drugs by adding the right ingredients to each vessel from pre-measured cartridges, following a simple step-by-step recipe. The process could help replace or supplement large chemical factories, and bring helpful drugs to new markets. (Watch Cronin’s TED Talk)

How Amit Sood’s TED Talk spawned the Google Art selfie craze. While Amit Sood was preparing for his 2016 TED Talk about Google’s Cultural Institute and Art Project, his co-presenter Cyril Diagne, a digital interaction artist, suggested that he include a prototype of a project they’d been playing with, one that matched selfies to famous pieces of art. Amit added the prototype to his talk, in which he matched live video of Cyril’s face to classic artworks — and when the TED audience saw it, they broke out in spontaneous applause. Inspired, Amit decided to develop the feature and add it to the Google Arts & Culture app. The new feature launched in December 2017, and it went viral in January 2018. Just like the live TED audience before it, online users loved it so much that the app shot to the number one spot in both the Android and iOS app stores. (Watch Sood’s TED Talk)

A lyrical film about the very real danger of climate change. Funded by a Kickstarter campaign by director and producer Matthieu Rytz, the documentary Anote’s Ark focuses on the clear and present danger of global warming to the Pacific Island nation of Kiribati (population: 100,000). As sea levels rise, the small, low-lying islands that make up Kiribati will soon be entirely covered by the ocean, displacing the population and their culture. Former president Anote Tong, who’s long been fighting global warming to save his country and his constituents, provides one of two central stories within the documentary. The film (here’s the trailer) premiered at the 2018 Sundance Festival in late January, and will be available more widely soon; follow on Facebook for news. (Watch Tong’s TED Talk)

An animated series about global challenges. Sometimes the best way to understand a big idea is on a whiteboard. Throughout 2018, Rabbi Jonathan Sacks and his team are producing a six-part whiteboard-animation series that explains key themes in his theology and philosophy around contemporary global issues. The first video, called “The Politics of Hope,” examines political strife in the West, and ways to change the culture from the politics of anger to the politics of hope. Future whiteboard videos will delve into integrated diversity, the relationship between religion and science, the dignity of difference, confronting religious violence, and the ethics of responsibility. (Watch Rabbi Sacks’ TED Talk)

Nobody wins the Google Lunar X Prize competition :( Launched in 2007, the Google Lunar X Prize competition challenged entrepreneurs and engineers to design low-cost ways to explore space. The premise, if not the work itself, was simple — the first privately funded team to get a robotic spacecraft to the moon, send high-resolution photos and video back to Earth, and move the spacecraft 500 meters would win a $20 million prize, from a total prize fund of $30 million. The deadline was set for 2012, and was pushed back four times; the latest deadline was set to be March 31, 2018. On January 23, X Prize founder and executive chair Peter Diamandis and CEO Marcus Shingles announced that the competition was over: It was clear none of the five remaining teams stood a chance of launching by March 31. Of course, the teams may continue to compete without the incentive of this cash prize, and some plan to. (Watch Diamandis’ TED Talk)

15 photos of America’s journey towards inclusivity. Art historian Sarah Lewis took control of the New Yorker photo team’s Instagram last week, sharing pictures that answered the timely question: “What are 15 images that chronicle America’s journey toward a more inclusive level of citizenship?” Among the iconic images from Gordon Parks and Carrie Mae Weems, Lewis also includes an image of her grandfather, who was expelled from the eleventh grade in 1926 for asking why history books ignored his own history. In the caption, she tells how he became a jazz musician and an artist, “inserting images of African Americans in scenes where he thought they should—and knew they did—exist.” All the photos are ones she uses in her “Vision and Justice” course at Harvard, which focuses on art, race and justice. (Watch Lewis’ TED Talk)