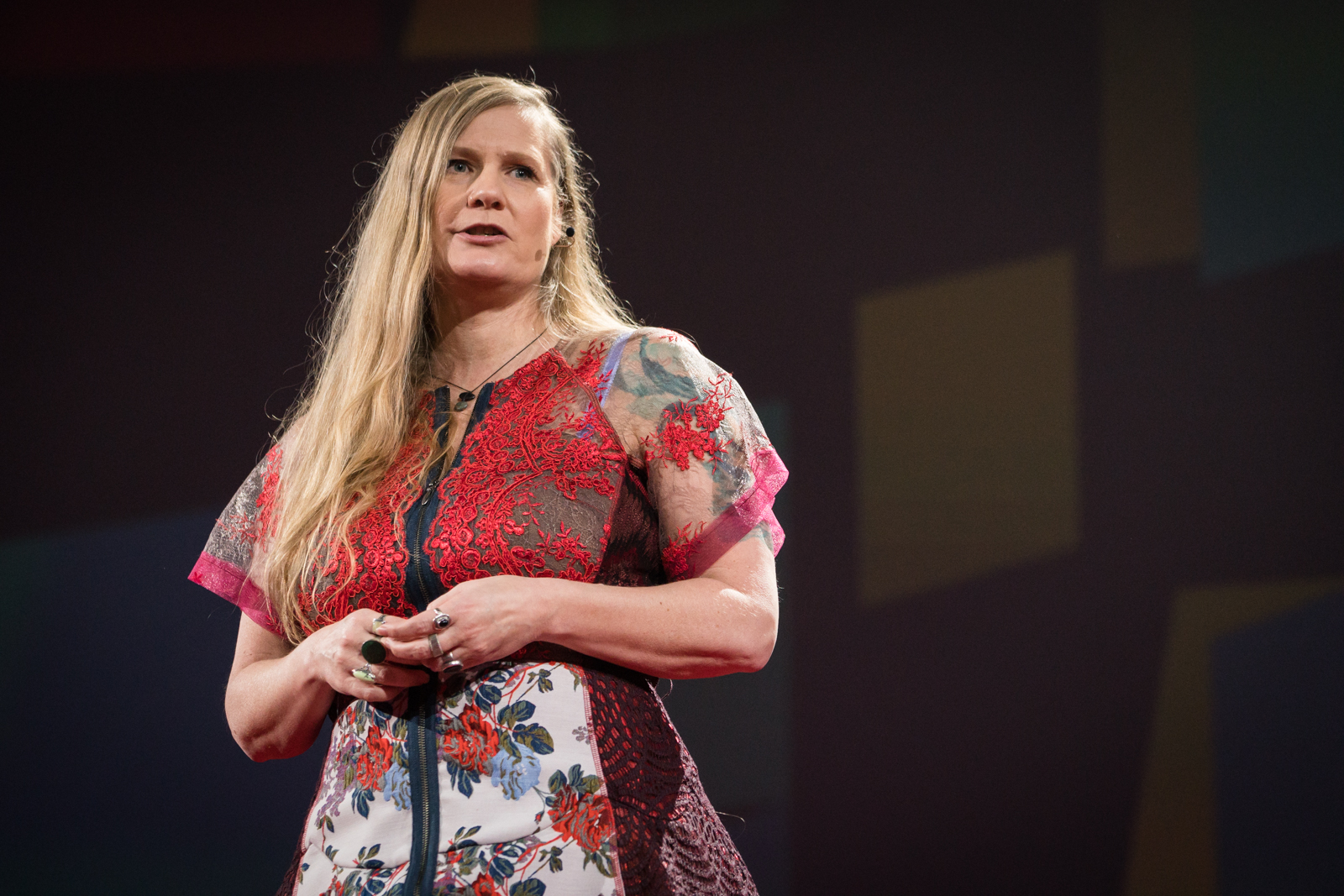 Lidia Yuknavitch is a misfit — who calls out to other misfits in the audience to tell their stories. She spoke onstage at TED2016 on Thursday, February 18, 2016, Vancouver Convention Center, Vancouver, Canada. Photo: Bret Hartman / TED

“I love this word because it’s such a literal word,” she says. “It means a person who missed fitting in. A person who fits badly.”

Yuknavitch identifies strongly with this. She’s the author of the memoir The Chronology of Water, a book about her life as competitive swimmer. But it’s also about her experience of growing up in an abusive household, and about the “all the times I’ve had to reinvent myself from the ruins of my choices.” These times, she says, were frequent: she failed out of college twice (or three times), had two “epically failed marriages,” and two “brief but lovely staycations in jail.” But her hardest time came when her daughter died the day she was born. “I hadn’t figured out how to live with that story yet,” says Yuknavitch. In a state of “zombie grief,” she lived homeless, under an overpass.

Yuknavitch’s memoir was published in 2011. But she began it a decade ago, as a short story — a story that won a big literary award. She was flown to New York, got to stay at a “cool, swank” hotel, met with book editors, and ate at restaurants that cost more than her rent. “I stole three linen napkins and I shoved a menu down my pants,” she says, “I wanted some keepsakes so when I got home, I could prove all this happened to me.”

On this trip, she felt like an impostor. She felt this even as she met with three of her favorite women writers, all “cutting a path through the main stream with their stories.” It didn’t matter that they talked to her “like maybe my words and stories mattered,” she felt like an imposter as she gave a reading, and even as she was approached by a literary agent. She didn’t know what to say, so she didn’t say anything. She flew home without a book deal, or anything to show besides those napkins.

Eventually, Yuknavitch became a writer. She’s now written two novels, Dora and The Small Backs of Children, and that memoir. “It just took me a little while,” she says. She’s also now a mother and a teacher. “Guess who my favorite students are?”

She starts to speak directly to her fellow misfits in the room. “There’s a myth in most cultures about following your dreams. It’s called the ‘hero’s journey.’ I prefer another myth to the side of that, or underneath it maybe. It’s called the ‘misfit’s myth,’” she says. “You may not know this yet, but you have the ability to reinvent yourself, endlessly. That’s your beauty.”

“You can be standing dead center in the middle all of your failure,” she says, “and still I’m only here to tell you: you are so beautiful and your story deserves to be heard. Because you, you rare and phenomenal misfit– you new species — are the only one in the room who can tell the story the way only you would.”