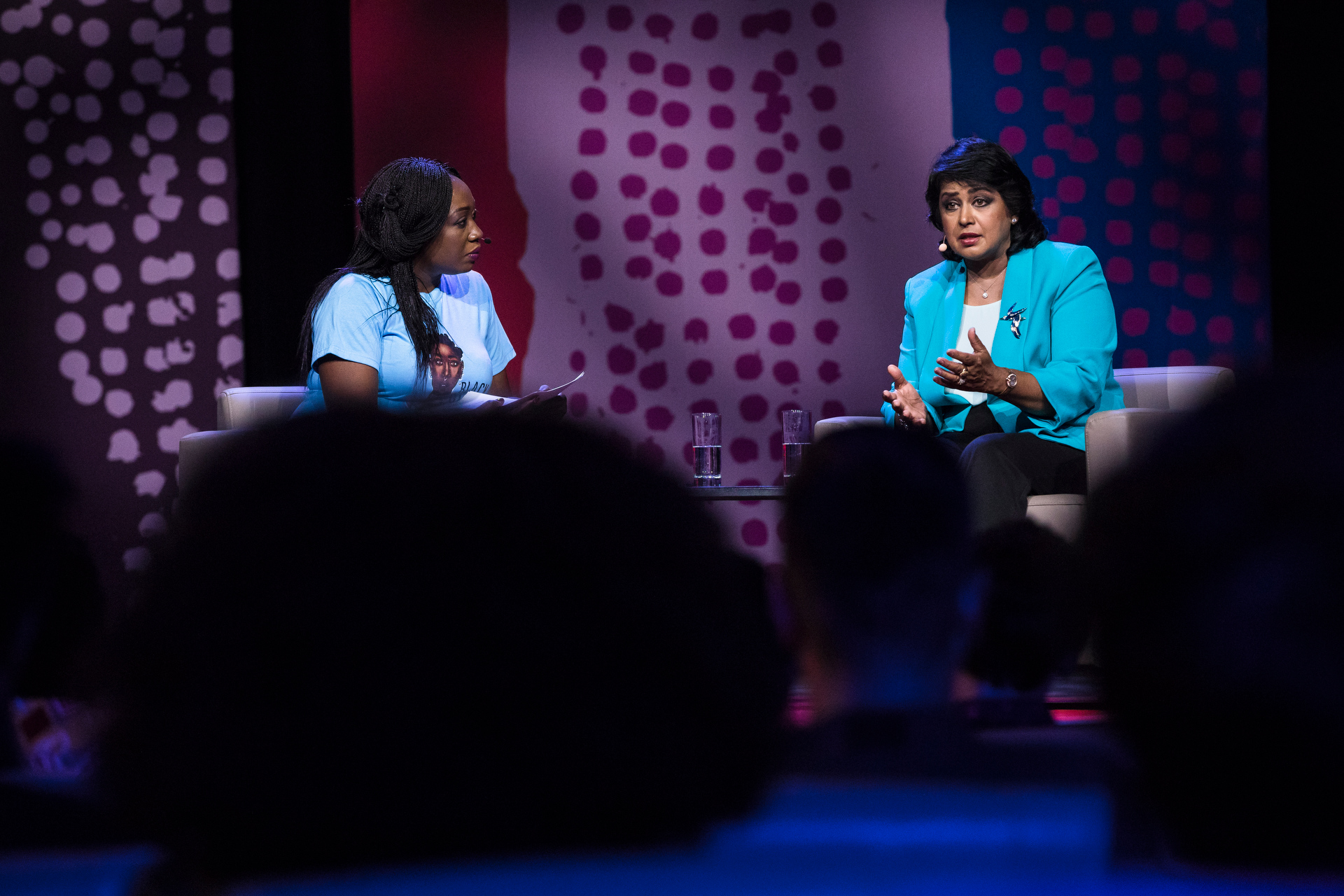 Ameenah Gurib-Fakim became the sixth president of Mauritius in 2015 (slightly to her surprise). Now, she’s using her platform to build capacity and highlight the biodiversity of her home country. She was interviewed onstage by Stephanie Busari of CNN at TEDGlobal 2017: Builders. Truth-Tellers. Catalysts., on Wednesday, August 30, 2017, in Arusha, Tanzania. Photo: Ryan Lash / TED

It’s the last session, can you believe it? This is the part where we declare our intent to take all we have learned and proceed with purpose to change the world. But first, a few big statements from inspiring speakers to wind us up — the kind of statements that will send us out in fighting shape, ready to take on any challenge.

Ladies and gentlemen, boys and girls, poodles and labradors … this is the last session of TEDGlobal 2017, in Arusha, Tanzania.

And since we’re already in party mode, Sauti Sol open the session with three of their hottest numbers back to back — “Live and Die in Africa,” “Sura Yako,” and “Kuliko Jana.” 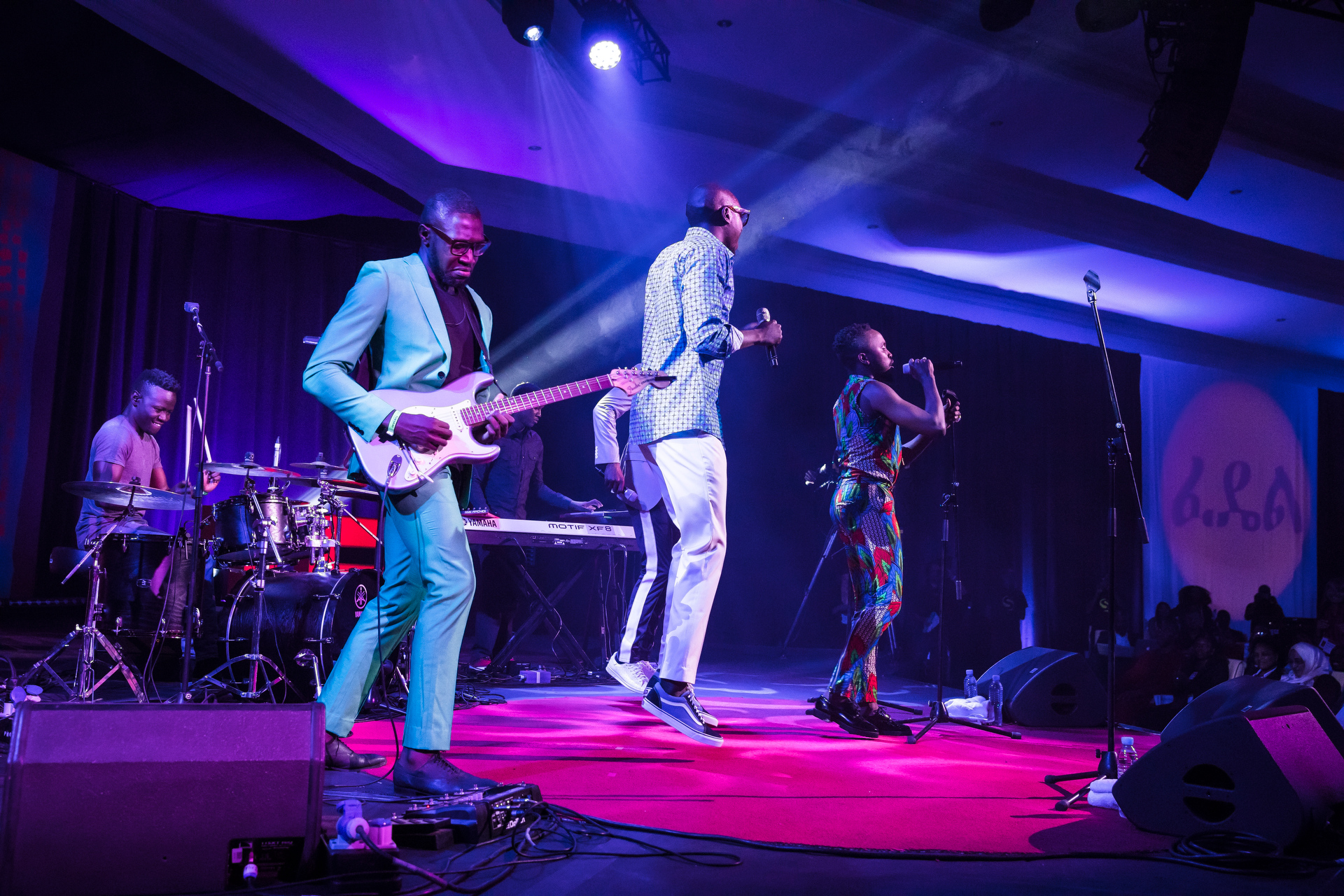 This kicks us into a few minutes of audience feedback, with a lineup for the mic and 60 seconds each on the clock — including a solid shout-out to Ghada Wali, a report from the flooding in Houston, Texas, and a stirring manifesto from Ory Okolloh. An excerpt:

In the final session of TEDGlobal 2017, another president graces the stage — this time, here in person. Maritius’ president, Ameenah Gurib-Fakim, is the only woman president on the continent, and the only Muslim female head of state currently in office. But this is hardly her only remarkable achievement. Gurib-Fakim is also a biodiversity scientist; in fact, well before she imagined she might be tapped to be president, she gave a TED Talk in 2014 about her five favorite plants. We will save the full details of her interview with CNN’s Stephanie Busari for a separate post, but we can tell you that save for one or two deflections, the president acquitted herself well. Not bad for someone who, three years ago, did not even aspire to sit in the president’s house.

In the past 50 years, 37 languages from sub-Saharan Africa have become extinct, and 315 languages across Africa are currently listed as endangered by UNESCO. Yvonne Chioma Mbanefo recollects how as a child she would get into trouble in school for speaking in her native tongue, Igbo — and says that “in many schools across Africa today, children are still being punished for speaking their indigenous languages.” For parents who realise the importance of preserving identity by teaching their children their native language (since many kids in Africa are taught English or French in school, not their local language), teacher-quality learning materials are scarce. It’s why Chioma Mbanefo has created micro-language lessons and illustrated dictionaries to help children learn the Igbo language. Next stop: more languages. 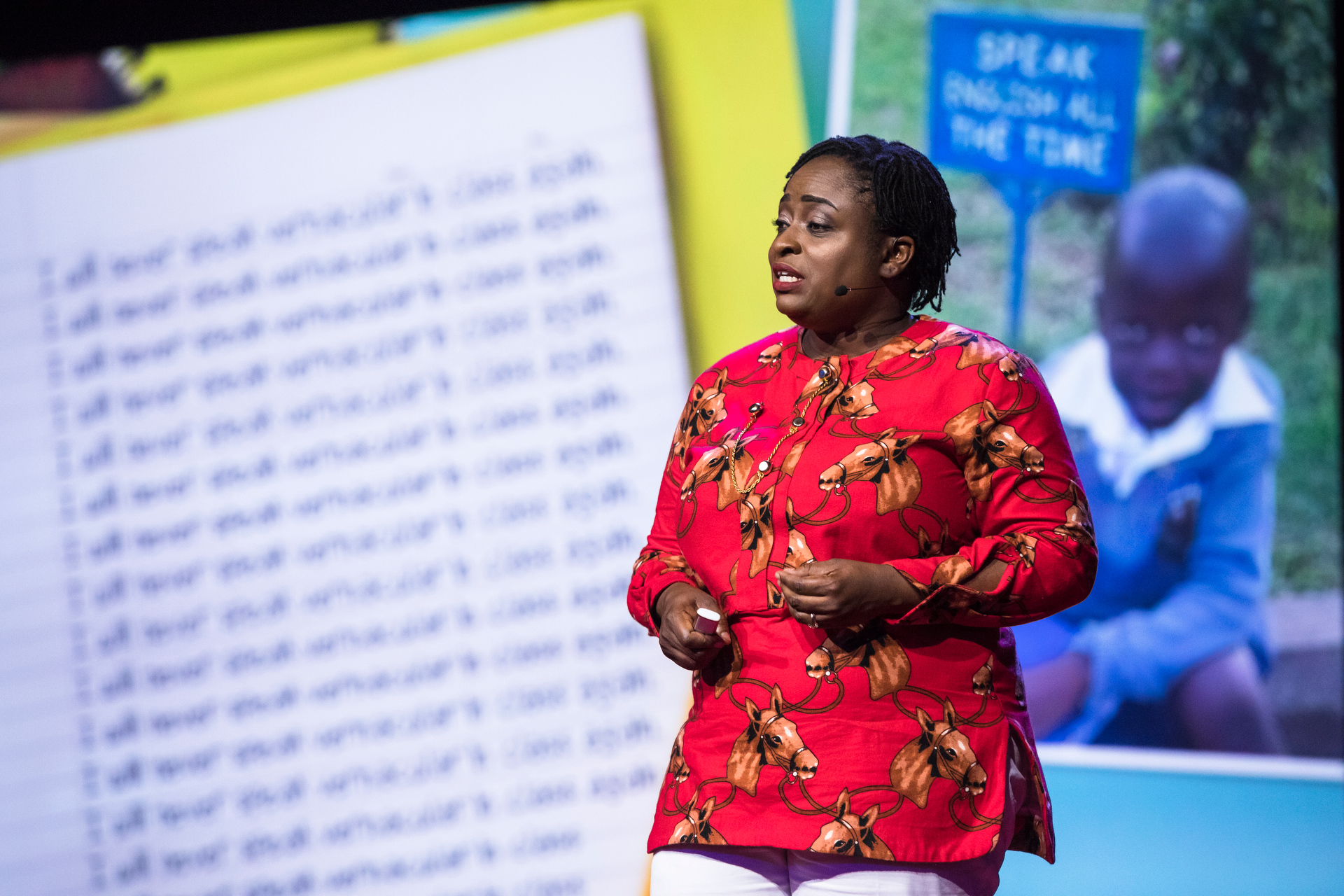 Yvonne Chioma Mbanefo created language lessons to teach her kids — and the world’s kids — her own native language, Igbo — to preserve it for generations to come. Photo: Ryan Lash / TED

University professor Clapperton Chakanetsa Mavhunga is training thinker-doers and problem solvers. This will require an entirely new curriculum, he says. “The curriculum we are designing shifts attention from merely meeting the needs of foreign industry towards producing visionaries, critical thinkers, makers, and designers, to imagine and create new industry that meets the needs of society.” Clapperton’s is the first of several talks in this session to turn into a good old-fashioned full-throated manifesto — a cry for African students and teachers to run toward problems, not away from them, and claim the creativity and riches of Africa for the people who live there. 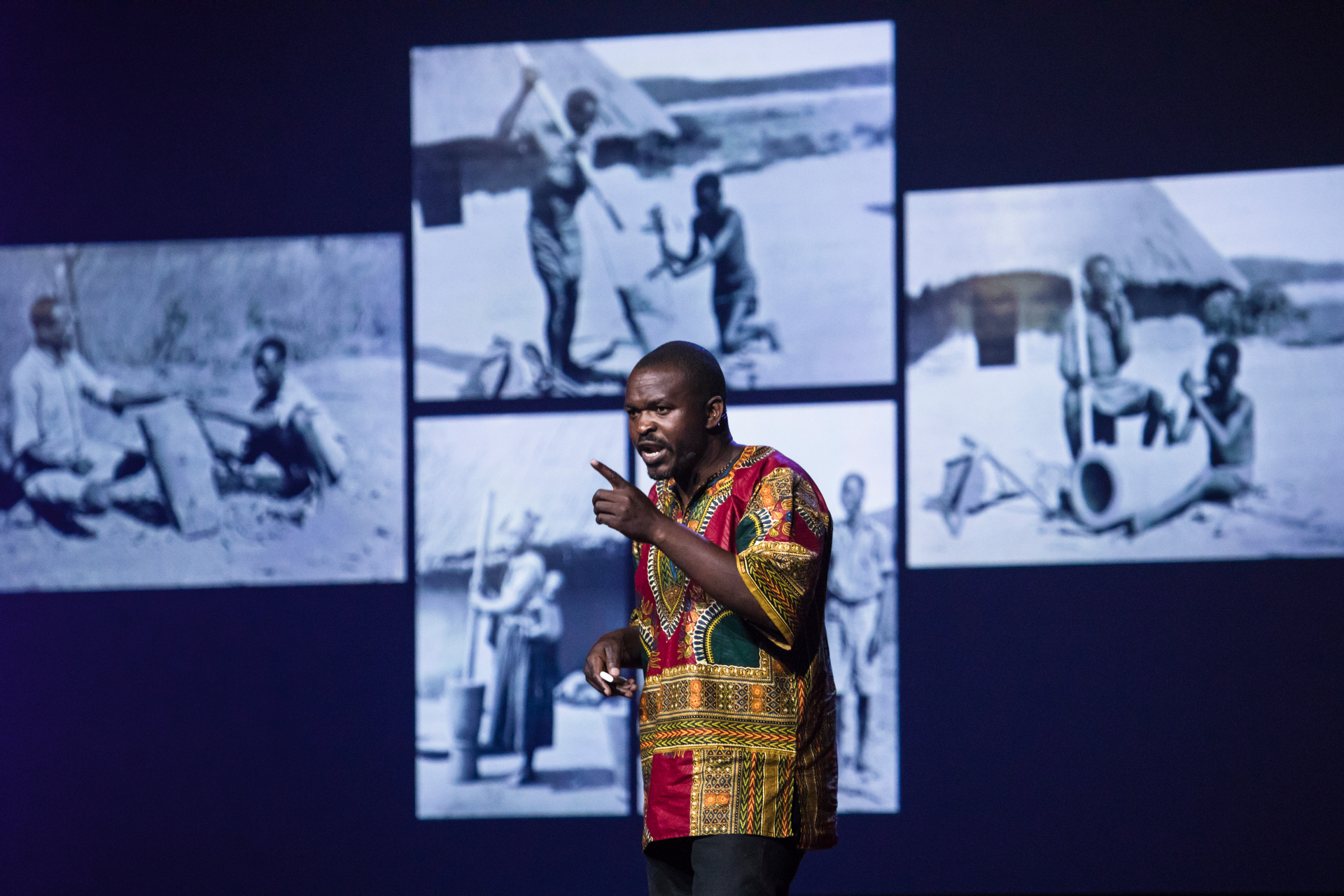 Dayo Ogunyemi believes in the transformative power of film — and his talk uses strong imagery as a springboard to examine Africa’s self-image. He leads us through a thought exercise called the 100-year leap: Imagine stepping back in time to the year 1917. Now imagine that same world but with semiconductors, modern medicines, jets. Dayo suggests that Africa’s untapped innovation could lead to just as big a jump — a century’s worth of progress — if it can only be unleashed. In a moment that brings the point home, he asks the audience to imagine having only 3 hours of electric power per day, or unpredictably losing internet for 10 or 16 hours at a time. (Reader, I have no need to imagine this.) It’s fine to talk of leapfrogging, he says, but filling the infrastructure and services gaps, to bring stable power, water and connectivity to African nations, is key to pushing the continent forward. 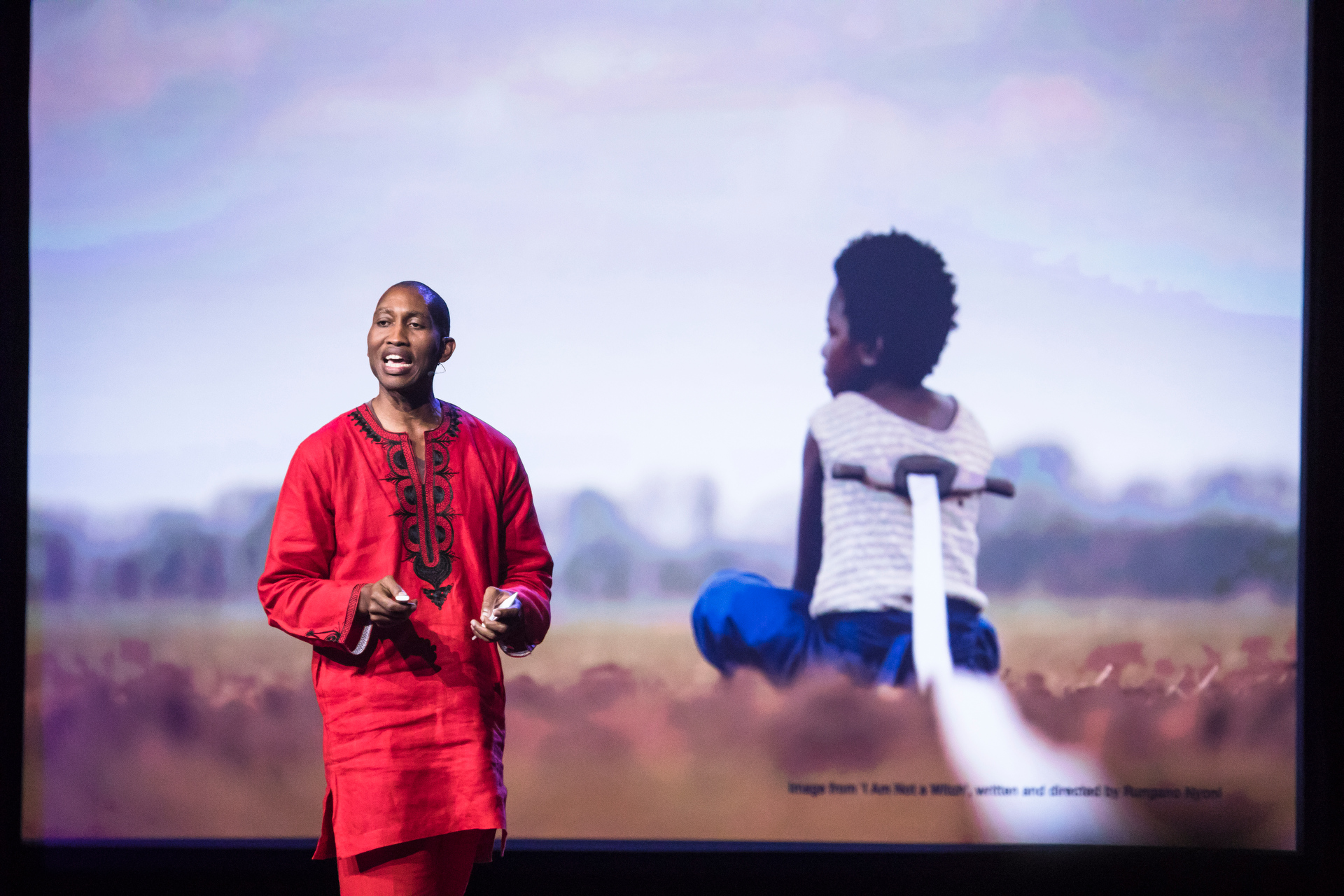 Dayo Ogunyemi speaks in front of a still from Rungano Nyoni’s film “I Am Not a Witch,” a story of Zambia that brought a challenging new vision to the Cannes Film Festival this year. But what matters, Dayo suggests, is not so much the international festival crowd, but what Africans think of their own creators. Photo: Bret Hartman / TED

Kisilu Musya quit his job in the city to become a farmer. But for years, he struggled. Failed crops made it difficult to put food on the table and send his children to school. When he consulted the other farmers who lived near him, he discovered that his situation wasn’t unique. His thirst for a solution drove him to enroll in agricultural courses, where he learned how climate change had shifted the realities of growing crops. He would need to change his methods to turn his farming fortunes around. Realising that it would take a village, Musya took his newly acquired knowledge back to his community. He reports that the techniques they would execute together, beginning from a small-scale irrigation pilot, saw them achieve three times the yield they were accustomed to seeing when harvest time came. He kinda got carried away towards the end, and host Emeka stepped onstage to help him wind up his talk with a hug and a smile. The audience loved him anyway, and he stayed onstage, sandwiched between hosts Chris, Emeka, Lolo and Kelo, as they said their last thanks and sent us out into the world. 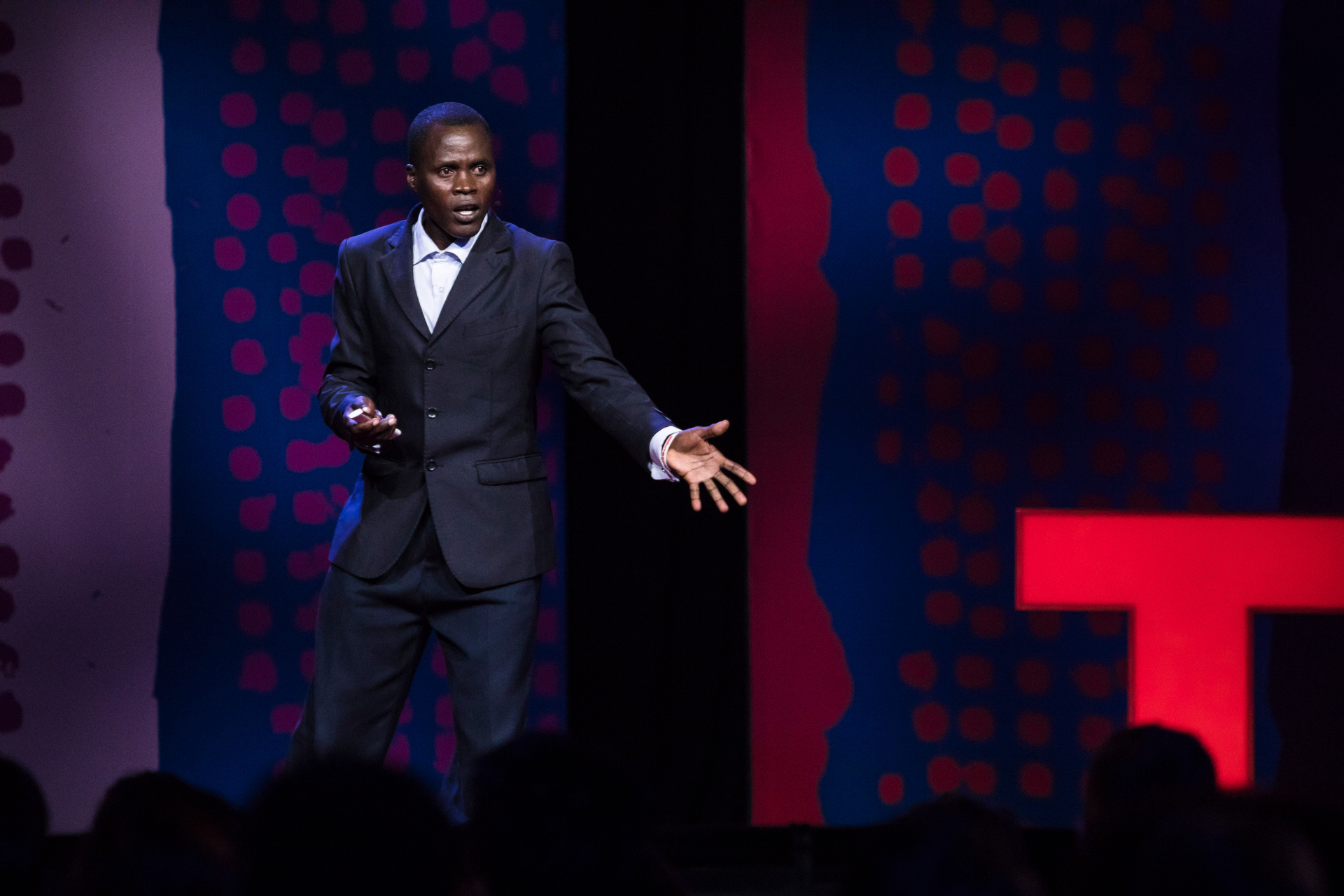 Kisilu Musya found his voice as a farmer, a community leader and a filmmaker, telling the story of a community effort to grow food and face climate change. Photo: Bret Hartman / TED

The conference has ended, but we’ve still got a lot of great content — features and, very soon, video — to share with you in coming days and weeks. In the meantime, check out all the TEDGlobal 2017 coverage, as well as all the conference photos on Flickr. 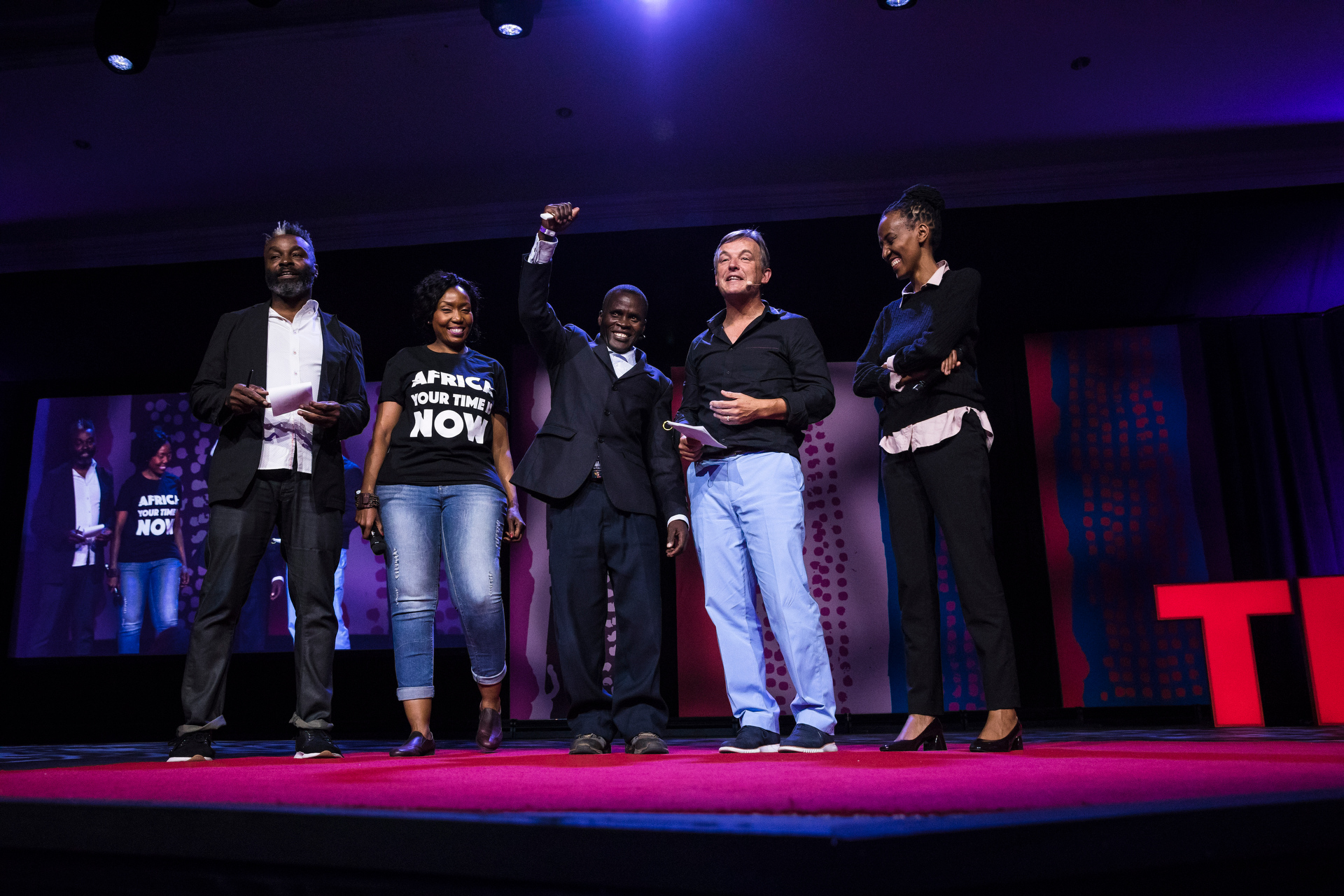