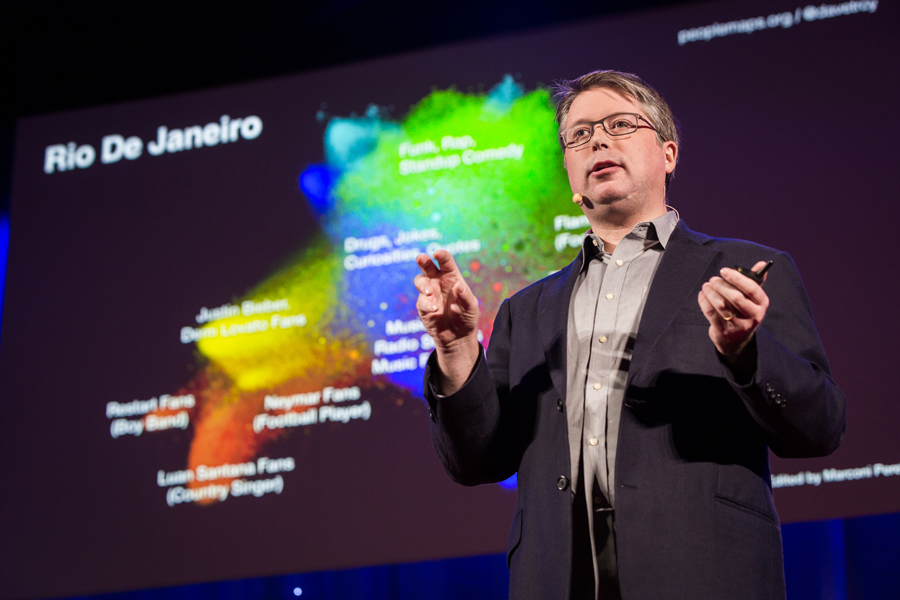 TED University is the raucous session before “real TED” starts when attendees get up and give their own short talks. (Some of our very favorite TED Talks came from this session, like talks on Lego, sex, and 5 dangerous things you should let your kids do.)

This morning at a cheerful 9am, we met the next class of professors. A brief recap:

Tom Wujec has attended so many TEDs he literally predates our digital records. He’s here today to show what the future of design might look like, in a world where digital processing is ubiquitious almost to the point of being free. Design shapes into three processes: Rip, Mod, Fab. Rip: scan and understand what exists, and make it digital so you can study it. Mod: use processing power to reform and reshape your idea in digital form. Fab: use a 3D creation tool — a printer, a laser cutter — to make what you just modded. It’s a process suited to creating complex, interdependent designs and systems, and tweaking them to make them ever better. (Bonus: After giving many TED Talks, Wujec gets his first standing O here. Aww!)

Simon Small is a digital strategist who shows how he and a small group tackled a big, pervasive problem: getting hospital employees to wash their hands. Doctors and nurses know they should wash up, or at least use sanitizer, after every time they touch a patient. But studies show they don’t, not as often as they should. It’s an interlocking problem of design, behavior and communication strategy.

Dave Troy loves cities, communities and maps — and he shares his latest exploration of them: peoplemaps.org, a way of mapping social media activity to reveal communities within cities. His map of his home city of Baltimore uncovers both some polarizations between the communities and some hopeful overlaps — for instance, while geeks and hip-hop fans tend not to cluster together, they do overlap to talk about sports. Which leads Troy to this insight: “Segregation is a social construct. It’s something we choose to do, and we can choose not to do it.” Onstage he unveils a brand-new map of Rio that shows the many overlapping micro-interests of this radically diverse city. “What is a city?” he asks. “I believe it’s the sum of the relationships of the people that live there.”

Deborah Strachan works where legal systems overlap, and is constantly tackling the question how far should one nation go in its respect for a foreign system of law. She illustrates her point with the story of Sebastian Burns and Atif Rafay, two convicted murderers who happened to be Canadian. They committed their crime in the US, then crossed the border back to Canada. The US wanted to extradite them to try them. But the Canadian court was faced with the decision: Could extradition to face the US death penalty, which contradicts the Canadia system, ever be justified? What is the interplay between law and morailty, between law and a country’s own values?  “No country has a monopoly on the perfect legal system,” Strachan says, “or on the pursuit of justice.”

You believe in the power of tech for good, right? (Or you probably wouldn’t be reading this.) Jon Gosier is a civic tech hacker; he believes in the power of tech for good too. But he asks us to take a hard look at the flip side of the assumption that tech helps everyone equally: what about those without access to smartphones and broadband to run these life-changing apps? It’s a blind spot that Gosier calls “trickle-down techonomics” — the assumption that a tech advance will eventually reach everyone. But that’s not what happens. As a powerful example from his hometown: The Philadelphia Free Library, facing reduced funding and reduced footprint, is embarking on a big project to digitize its book collection. Which is amazing in a lot of ways. But not for the kid without a cell phone, without internet at home, who’s just lost access to the contents of that printed book. Another example: We’re growing used to personal health data trackers on our phones or our wrists; our collected info will help our doctors and nurses treat us better. But, Gosier asks, “What does the medical experience look like to someone without a $400 smartphone? Do they become a burden on the health system?”

One in two people who live in the continent of Africa don’t have access to modern electrical power. Which means that, when night falls, instead of flipping a switch to turn on the lights, they most probably light up a kerosene lantern to eat dinner by, do homework by. (One evening of sitting by one kerosene lantern is equal to smoking two packs of cigarettes.) Erica Mackey and her company Off-Grid Electric is working to change that, by creating an infrastructure and opening up a market for solar power in sub-Saharan Africa. It’s a big vision lit by a thousand solar lamps.

Leerom Segal asks: “What if a company understood its talent, as well as, or even better than it understand its customers and its market?” As you may guess, he thinks most don’t yet — in fact, he says, “70% of workers today are disengaged.” Management is a technology, he says, and he asks why we’re still using management technology from 100 years ago: bureaucracy and procedures that are “like this plaque that’s clogging organizational arteries.” His bold thought: “As people in your organization demonstrate more and more competence, can you reduce the bureaucracy?”

Angelo Vermeulen led the first Hi-SEAS simulated mission to Mars — 6 people living on the slope of a volcano in Hawaii, living and working as we’ll someday work in space colonies. His crew’s main job was to examine food systems that would sustain life in such a constrained environment — but the meta-problem was simply how to keep that crew of 6 people happy, engaged and productive. He’s also an artist, and after the Hi-SEAS mission ended he embarked on another: the Seeker project, working with communities around the world to imagine a new starship. “The challenge is to reinvent human survival,” he says, but not in a survivalist, doomsday sense. Instead, the project invites participants to “take a step away from earthbound constraints and re-imagine our future.”

The ball of human energy that is Bel Pesce bounds onstage to share five reasons that you won’t achieve your dreams. Here’s a taste of two: #1: Believe in overnight success. “Overnight success,” she says, “ is always a result of everything you’ve done in your life up to that point.” and #4: Believe the fault is someone else’s. “Be responsible for your own dreams.”

Diana Enriquez studies the informal economy. “And when I tell people I study the informal economy, people assume I’m studying the black market — and sometimes, I totally am.” But mostly it’s everyday work: child care, retail in small shops, food service, factory work. In India, some 72% of the economy is part of the informal economy — unregulated, untaxed labor and entrepreneurship. In Brazil it’s 42.2%; in the US about 8%. What can entrepreneurs of all kinds learn from informal business? Your customers are an active test market — it’s easier for an unregulated business to change product or change focus completely.  And community, reputation, is your make-or-break. If you’re running an unlicensed food cart, it better be the cleanest, cheapest and tastiest on the street.

Closing out the session, Usman Riaz and Susie Ibarra throw down some TED Fellows flavor with an improv percussion performance — on drum kit, on the floor and walls, on hands and knees.