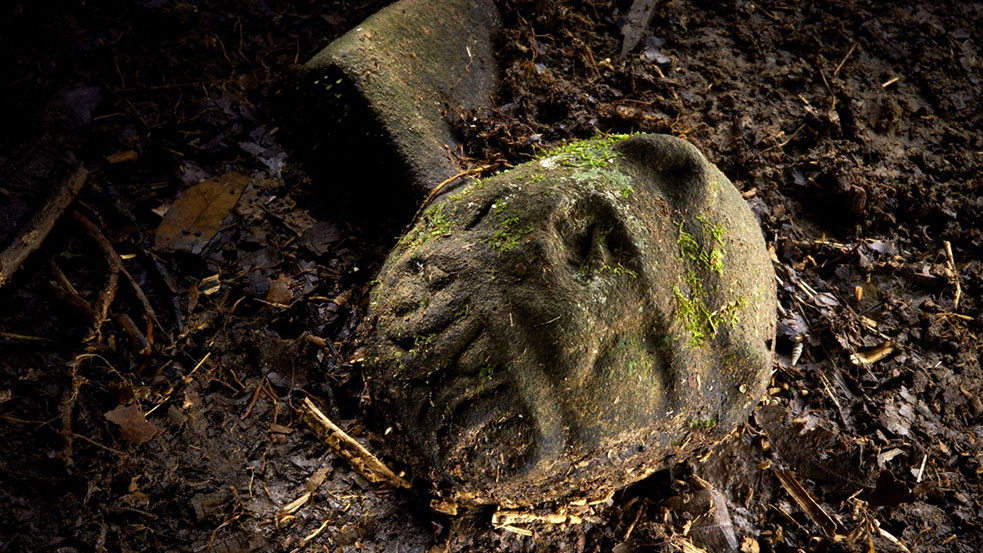 The “jaguar stone” is one of 50+ artifacts found in a remote rainforest in Honduras. TED speaker Mark Plotkin finds it interesting because while it is part jaguar, it is also part man—feeding into legends of shamans who morph into jaguars. “When I saw that carving on the forest floor, it sent shivers down my spine,” he says. Photo: Dave Yoder/National Geographic

“The White City.” “The City of the Monkey God.” “The Place of Cacao.” Rumors of a majestic city nestled in the remote rainforest of Honduras — referred to by all of these names — have circulated for centuries, wedging their way into Honduran national identity. They seemed to be the stuff of legend. Until a team of explorers emerged from Honduras’ Río Plátano Biosphere Reserve on February 25, with photos and tales of this incredible lost city.

Mark Plotkin of the Amazon Conservation Team (watch his TED Talk “What the people of the Amazon know that you don’t”) traveled to La Mosquitia, a remote region on eastern coast of Honduras, to be a part of this team. Their mission was to explore a mile-long tract of the jungle that, in 2012, was identified from the air as hiding ruins. What they found on the ground was mind-blowing — more than 50 artifacts, hidden plazas and a sunken pyramid with what might have been an offering at the base.

“It felt as if everyone had left in a hurry … It was downright eerie. It reminded me of Pompeii,” says Plotkin, who was instantly taken with one item the team found on the ground, the “jaguar stone.” “It sent shivers down my spine.”

While National Geographic published an incredible story about the expedition last week, sharing the team’s theory that perhaps it is not so much a “lost city” as “lost cities,” plural, we wanted the first-person account from Plotkin himself. Below, he answers a few questions.

What clues did you have that the Lost City existed?

In 1526, the conquistador Hernán Cortés wrote to the Spanish Emperor about a place in the Honduran interior that was full of large cities and richer than Mexico. In 1940, the American explorer Theodore Morde spent several months in the region and reported finding “The City of the Monkey God.” But … he never revealed the location. And he committed suicide in 1954. So its whereabouts have remained a mystery.

Many have looked for it, but the interior of Mosquitia is exceptionally difficult to travel and work in. The terrain is mountainous and roadless; it is the biggest block of rainforest north of the Amazon. And the area harbors more large, poisonous snakes — specifically, fer-de-lances – than any place I have worked in the Amazon.

How did your expedition come to be?

A documentary filmmaker named Steve Elkins became interested — some would say obsessed — with finding the so-called “Ciudad Blanca” in the 1990s. He tried unsuccessfully to locate the ruins for a number of years. Then he heard about lidar, a technique that transmits a laserbeam from above and determines the distance of objects on the ground by measuring the time it takes the light to bounce back. There’s a fabulous 2013 New Yorker article, where journalist Douglas Preston describes how lidar can peer under the forest canopy and can map entire square miles of rainforest in a few hours – something that would have taken decades or longer on foot. Lidar can locate human-built structures in the rainforest that you sometimes cannot even see while standing next to them.

Elkins joined forces with another documentary filmmaker, Bill Benenson, to bring a [million-dollar] lidar scanner to Mosquitia. After a series of flights [in 2012], they thought they might have found what they were looking for. It’s interesting; it’s a futuristic approach to a better understanding of the ancient world. As an ethnobotanist, I find this combination of the ancient and the modern endlessly fascinating.

What were the logistics of the expedition?

The scientific team was co-led by Christopher Fisher of Colorado State University and Oscar Neil Cruz of the Honduran Institute of Anthropology and History. A Honduran engineer named J.C. Fernandez, with the University of Houston, managed the lidar.

Honduras is a pretty dangerous place these days. So at all stages of the expedition, we were accompanied by the very capable Honduran military. We flew into the site on a tiny helicopter that was able to land on little more than a riverbank. We hiked to the ruins from there, also accompanied by members of the British Special Forces who set up a camp nearby. 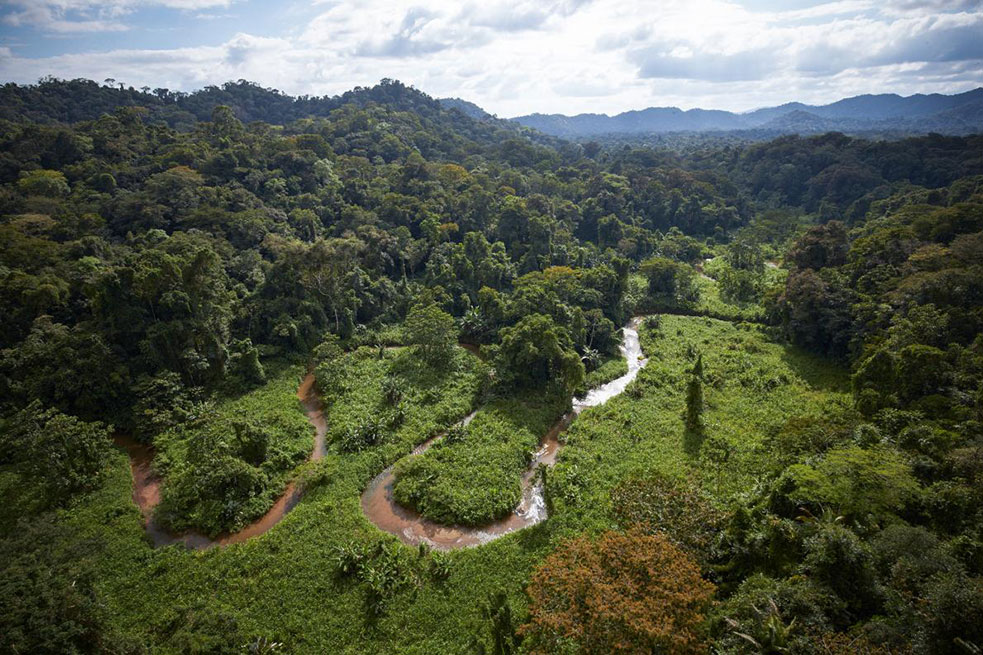 An aerial view of the Río Plátano Biosphere Reserve in Honduras. It’s in this ultra remote jungle that explorers found what they think is the mythical “City of the Monkey God.” Photo: Dave Yoder/National Geographic

What did you find when you get there?

The most striking discovery was a cache of intact artifacts sticking out of the ground. It felt as if everyone had left in a hurry. Or maybe pestilence swept through and killed everyone? It was downright eerie. It reminded me of Pompeii.

One thing you mentioned is a “jaguar stone.” Tell us more about that, and what did it mean to you personally, given your work with shamans?

In the neotropical rainforest, the most powerful and dangerous animal — the jaguar — is the symbol of the shaman. I’ve worked closely with several medicine men in Amazonia who were said to be able to transform themselves into big cats and roam the forest at night.

The jaguar stone isn’t just a jaguar — but a jaguar that has distinctly primate-like features. When I saw that carving on the forest floor, it sent shivers down my spine. I knew I was gazing on something more than just an exquisite work of art.

Who do you think lived in the city? What is the importance of this specific site?

Culturally, you had the well-known Aztecs, Olmecs and Mayas to the northwest. The Maya site of Copán, which is to the west. The Incan empire was to the south — it reached as far north as Ecuador — along with the Chibchans, who dominated much of pre-Columbian Colombia but are less well-known to the general public

This area in Honduras lies between all of those cultures. Only further research will reveal who these ancient people of early Mosquitia really were.

Biologically, the area needs to be an international conservation priority. UNESCO has named the Río Plátano as a Biosphere Reserve, but it has been nibbled away by illegal logging and cattle ranching operations. It was placed on the UN’s “Danger List” in 2011. The southern border of the rainforest keeps shifting north as ranchers cut down the forest. Many said this was happening to produce beef for the US fast-food market.

This reserve is receiving global attention as a result of the expedition’s findings. It is finally being recognized as a treasure trove of both biodiversity and cultural heritage. People at the highest political level in Honduras, all the way to the President, are paying attention to the challenges and the threats of the region as never before.

Look, I have spent a lot of time in a lot of rainforests. This is one of very few places in the world where monkeys will come down from the canopy to have a look at you. Tapirs wandered through our camp because they have presumably never seen humans before. If proper protection is put into place in terms of safeguarding the forest, the animals and the archeological sites here — something that seemed at best unlikely prior to this expedition — positive results will have been achieved.

I regard this whole effort as an incredibly exciting conservation opportunity, as much as anything else. This great rainforest was and is going fast. With these preliminary finds and all the interest they have generated in Honduras and around the world, we have a unique chance to protect these treasures, both biological and cultural.