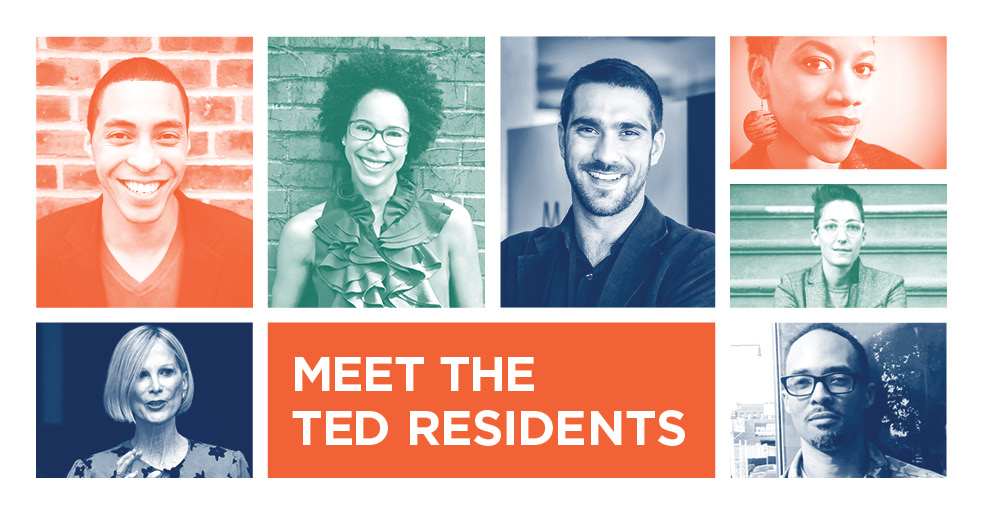 An idea worth spreading doesn’t just magically appear out of thin air. Instead, it needs a long incubation period, a sometimes frustrating — and often exciting — trial and error of creation, failure and innovation.

On April 18, TED welcomed its first-ever class of the TED Residency program, an in-house community of 27 bright minds who are tackling ambitious projects and making meaningful change.

This group of thinkers will spend the next four months in a collaborative space, learning with and from each other on ideas that address …

… among many other fascinating subjects.

At the end of the session, the residents will give a TED Talk about their ideas in the TED office theater. Read more about each resident below:

Daniel Ahmadizadeh is working with artificial intelligence to revolutionize how consumers are informed and make choices. He co-founded Riley, a chatbot concierge service for the real-estate business.

Piper Anderson is a writer and creative strategist who has spent the past 15 years working to end mass criminalization and incarceration. She recently launched the National Mass Story Campaign, which will host participatory storytelling events in 20 cities to catalyze more restorative and transformative approaches to justice.

Isabel Behncke is an Oxford field primatologist from Chile who is working on the evolutionary roots of social behavior in humans and other animals. She is creating a show on the science of joy that blurs boundaries among theater, poetry and cutting-edge science.

Susan Bird is CEO of Wf360, a global consultancy that promotes conversation not as a “soft skill,” but as a strategic tool. She is developing a podcast about the art of face-to-face conversation, which has become something of a luxury in this age of electronic communication.

Sashko Danylenko is a Ukraine-based filmmaker whose animated films explore wonder and curiosity. Currently, he’s working on a film that documents cities around the world through by focusing on their bicyclists.

Tanya Dwyer is an attorney and social entrepreneur in Brooklyn who works to promote inclusive capitalism and economic justice. She wants to help establish a living-wage business park in Crown Heights that is cooperatively owned by neighborhood residents and stakeholders.

Laura Anne Edwards is building DATA OASIS, a dynamic index of valuable data sets, many of which are taxpayer–funded and technically “open” but in practice, extremely difficult to locate and access. DATA OASIS will reduce redundant research and provide a forum for idea sharing.

Rob Gore, an academic emergency medicine physician based in Brooklyn, leads KAVI (Kings Against Violence Initiative), a youth empowerment and violence prevention program that has been running for the past five years. He is working to transform health care in marginalized populations.

Che Grayson is a filmmaker and comic book creator whose multimedia project Rigamo, a comic series and short film about a young girl whose tears bring people back to life, helped her overcome her grief at the death of a beloved aunt. She wants to explore using these forms of storytelling to tackle other tough subjects, heal, and inspire.

Bethany Halbreich runs Paint the World, an organization that wants to make opportunities for creativity ubiquitous. Paint the World facilitates public art projects in underserved communities; the resulting pieces are sold, the profits fund more kits and supplies for areas in need.

Sarah Hinawi is the co-founder and director of Purpl, a small-business incubator that focuses on the person rather than the business. Building upon two decades in the field of human development, she is now examining what leadership training looks like in the gig economy.

Designer and writer DK Holland has spent the past two and a half years in high-poverty public elementary school classrooms in Brooklyn, developing free after-school micro-democracies run by the kids, for kids, so they can learn better. She is working with her team of progressive educators to develop the kids’ ideas into  toolkits—notably the Learning Wall, Portfolio Pockets, and Democracy in a Box—to offer to other schools.

Liz Jackson is the founder and chief advocacy officer for the Inclusive Fashion & Design Collective, the first fashion trade association for businesses and designers serving the needs of people with disabilities. Her mission is to introduce the world to inclusive design.

Ayana Elizabeth Johnson is a marine biologist and policy expert who advocates zoning the ocean as we do land, so we can use the sea without using it up. As executive director of the Waitt Institute, she led the Caribbean’s first successful island-wide ocean zoning project, resulting in one third of Barbuda’s coastal waters being protected, and went on to launch similar initiatives on other islands.

Jonathan Kalan and Michael Youngblood want to redefine the notion of home and its relation to work. Aimed at millennials who care more about mobility than about owning real estate, their “global lease” aims to let subscribers stay “location-independent.”

Brian McCullough is the creator of the Internet History Podcast, an oral history of the internet; he’s now telling the stories of Web 2.0.

Ted Myerson is a co-founder of Anonos, a Big Privacy technology company that enables data to be more readily collected, shared, and combined, potentially enabling breakthroughs in personalized and precision medicine.

As a tap dancer, Andrew Nemr has lived the oral tradition of American Vernacular Dance. Cofounder (with the late, great Gregory Hines) of the Tap Legacy Foundation, he is now working to transfer that archive online.

Cavaughn Noel is an experienced digital strategist and tech entrepreneur who is broadening the horizons of urban youth by creating a platform that exposes them to technology, via hip-hop, fashion, and travel.

Torin Perez is building a digital platform for sharing children’s stories from Africa and the diaspora. The DreamAfrica app contains multimedia content from established publishers, independent content creators, and children.

Amanda Phingbodhipakkiya is a Columbia-trained neuroscientist–turned–art director. Her organization recruits designers and researchers to collaborate on visual media that demystify academic science.

After her Flappy Bird in a Box video went viral, Fawn Qiu wondered how else she could hook teens on engineering.  By creating an open-source model for designing fun projects with low-cost, everyday objects, she hopes to encourages a new generation of engineers.

Vanessa Valenti is the co-founder of FRESH, a next-generation speakers’ bureau focused on diversifying public speaking. She’s studying who gets on the world’s most influential stages and what their experiences are once they get there. Her goal is to redesign thought leadership.

Kimberlee Williams is the CEO of FEMWORKS, a communications agency based in Newark, NJ.  She wants to transform local economies by enrolling African-American consumers in buy-local campaigns.

Sheryl Winarick‘s work as an immigration lawyer gives her a unique opportunity to know intimately the people she serves, the reasons they choose to migrate, and the challenges they face. She aims to create an online storytelling platform to humanize “the other,” and to cultivate a sense of individual and collective responsibility.