TED and Wikipedia have teamed up in the spirit of open, accessible knowledge.

“I firmly believe that nonprofit organizations should magnify their impact by collaborating wherever their aims align,” says Andy, one of TED’s Wikipedians-in-Residence.

Andy works as a consultant, advising organizations about Wikipedia, Wikiquote and numerous other Wiki-projects run by the Wikimedia Foundation, including a program known as the GLAM-Wiki Initiative. GLAM stands for “Galleries, Libraries, Archives and Museums,” and it pairs experienced Wikipedia editors with nonprofit cultural institutions — like TED, which fits under the “archive” category of GLAM’s acronym.

What’s in the archive that TED is sharing with the Wiki editors? A collection of metadata around our 2,000+ TED Talks — headlines and descriptions, tags, speaker names and more — which will become part of the Wikidata bank, and can be used to add all kinds of information and detail to Wiki pages.

So TED has hired Andy and his fellow veteran Wikipedia volunteer, Jane, to work part time for six months to help connect TED’s data with Wikipedia. Their goal: to motivate their fellow volunteers to add new articles about speakers and topics that TED covers, and to add new links into existing articles where TED’s data would add knowledge. As well, they’re hoping to inspire people to translate pages. Think of Andy and Jane as the face of TED in the Wikipedia community, liaisons who understand the nuances and sensitivities that come with being a part of such a dedicated and hardworking collective. 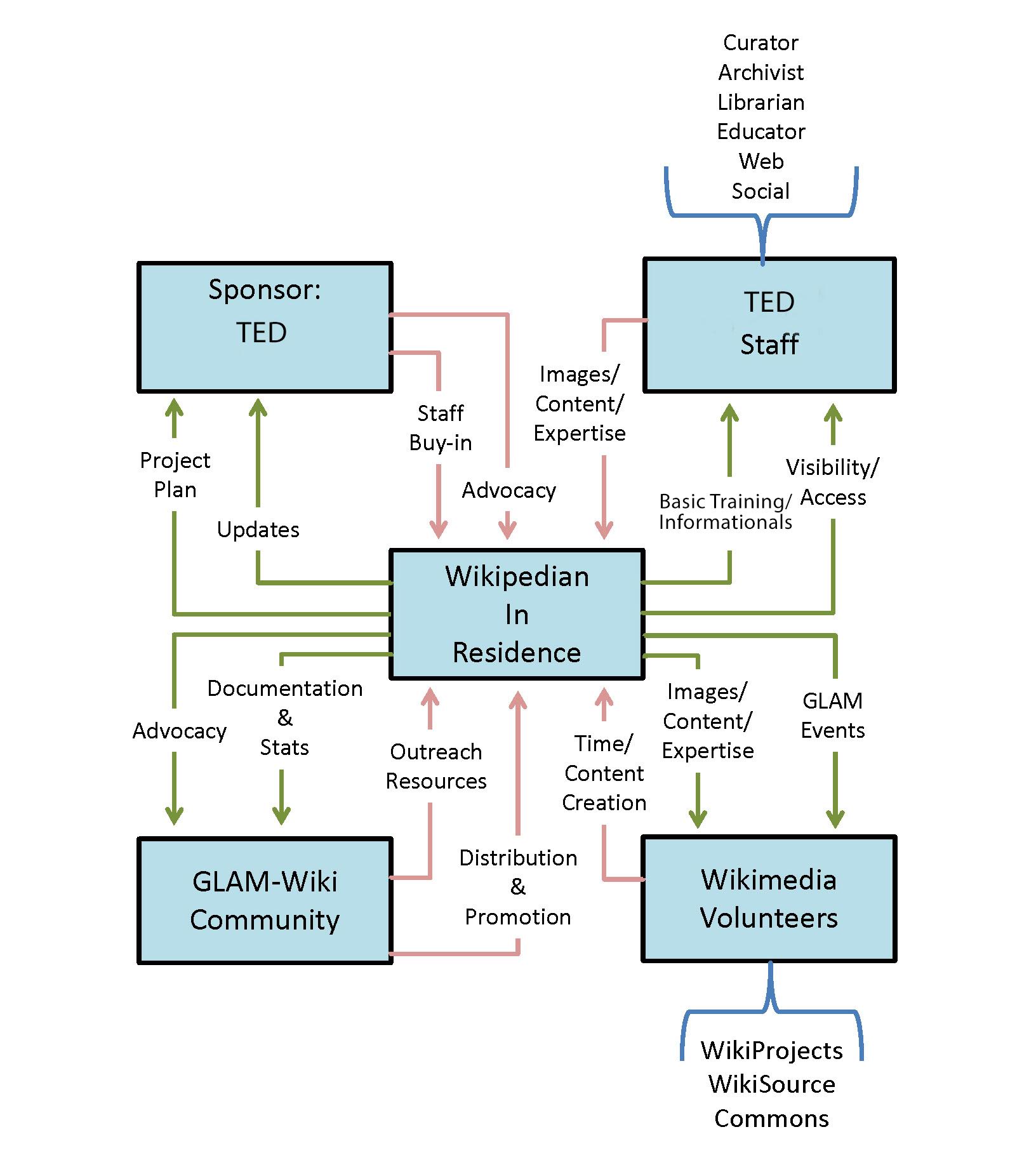 This complex-seeming workflow for linking TED’s metadata to Wikipedia, encouraged and assisted by TED’s Wikipedians-in-Residence, is how Wikipedia works — many hands, many lines of communication and many ways to contribute. Based on original diagram by Lori Byrd Phillips; edits by Sacha Vega for TED.

To break down the diagram: TED donates metadata (images, content) to the Wikipedians-in-Residence who then upload this information to Wikidata,  which allows fellow Wikimedia volunteers to easily access these details and update or create articles. In return for the data, Andy and Jane share their expertise with the TED staff through informationals and basic Wikimedia training. Occasionally, the Wikipedians-in-Residence may hold a GLAM event. These events can range from competitions to hackathon-style tasks to further encourage participation with the project.

Andy and Jane are working for and getting paid by TED, which is made immediately clear to the Wikimedia community. “Though they have different approaches, TED and the Wikimedia community both want to make knowledge available, multilingually,” Andy says via email. “I want to help both organizations to do that in partnership, and to help each community to understand the other.”

“The advantage of working in Wikidata is that everyone can work there in their own language,” Jane says. “This enables easy access to information across all language Wikipedias. Central discussions are still in English, but when we link to things, they show up in the user’s own language.”

Why can’t TED just edit Wikipedia on its own? Well, the Wikipedia community and the Wikimedia Foundation have set up policies to limit organizations from editing their own pages — no matter the intention, good or bad. Giving a business unrestricted access to its Wikipedia page could result in a constantly evolving advertisement, possibly transforming much of the site into a black hole of never-ending marketing copy.

The Wikimedia ethos is about maintaining a collaborative and transparent digital climate. And Wikipedia as a whole is its own galaxy. Collaborating with people who are intimately familiar with its layout and peculiarities, while bringing perspectives from numerous cultures, languages and fields of expertise, allows for an organic cross-pollination of information.

Over time, as speaker pages are created and articles updated, TED’s Wikipedians-in-Residence will be able to identify gaps in TED’s past and present coverage, and reflect back to TED what they see. Meanwhile, they can generate calls to action to the Wikipedia community – via project pages, discussion boards and on their personal profiles – to fill in the lightly covered areas, no matter the topic.

Which suits these volunteers fine. “My favorite part of being a Wikipedian is learning more about what interests me,” Jane says.

There are a lot of kindred spirits among the TED and Wikimedia communities, people committed to the spreading and sharing of knowledge. This collaboration is all about sending a probe into the farthest corners of Wikimedia — finding those who are interested in helping to further TED’s mission of ideas worth spreading.