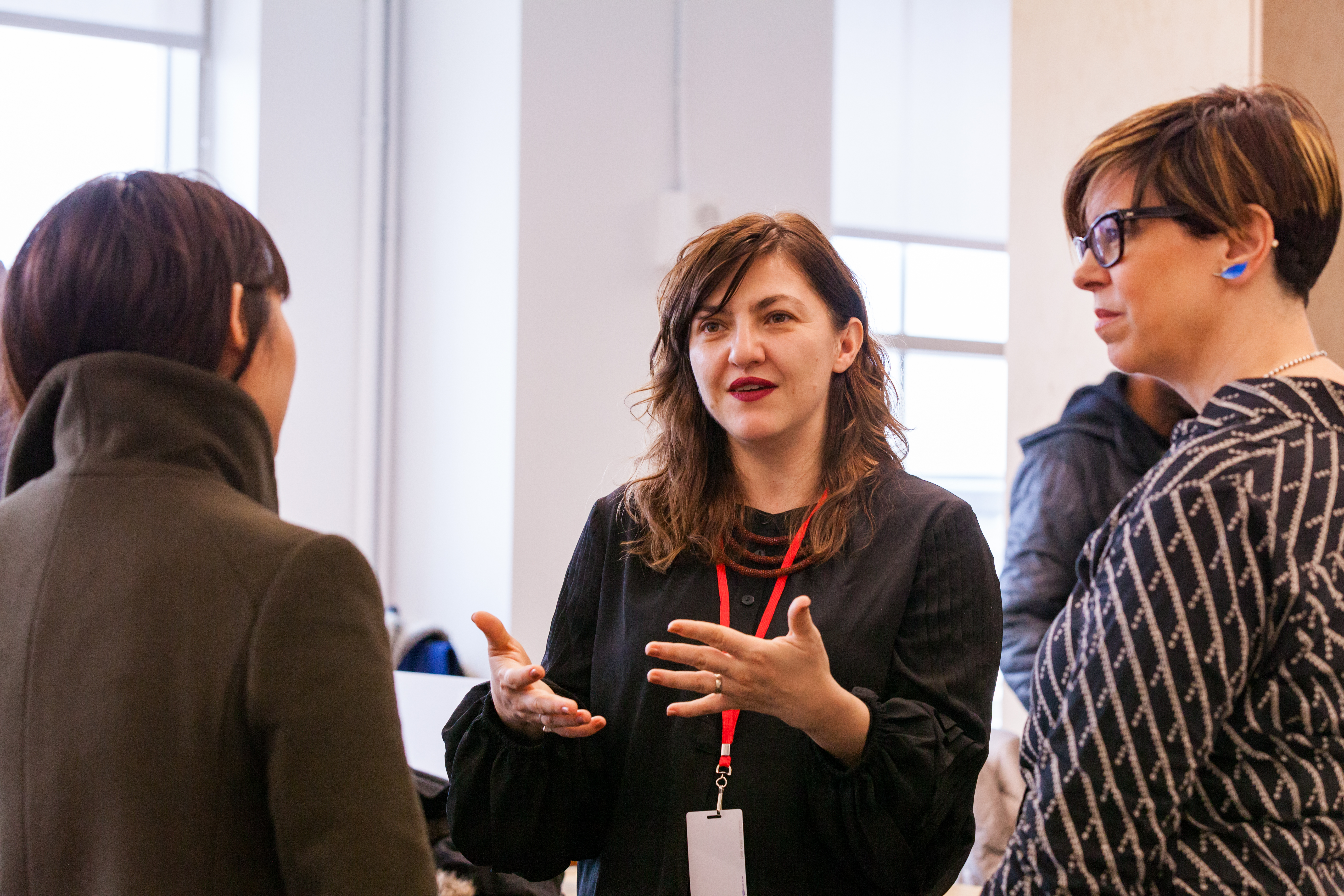 On March 12, TED welcomed its latest class to the TED Residency program, an in-house incubator for breakthrough ideas. These 19 Residents will spend 14 weeks in TED’s New York headquarters working and thinking together; the class includes exceptional people from all over the map, including Brazil, the Netherlands and Korea.

Here’s a bit more about the new crew (for full bios, see their full TED profile, linked to each name).

Stefan Al is a Dutch-born architect and professor of urban design who believes that architecture is more than just buildings. His work addresses large-scale problems such as climate change and explosive population growth. For example, how about waterfront buildings that double as levees to protect against sea-level rise?

Ashwini Anburajan is using blockchain to democratize access to capital. She is a founding partner of 22X Fund, a tokenized opportunity to invest in an index of pre-vetted, high-growth startups.

Eron Bloomgarden is creating an impact investment fund that will help place a value on standing tropical forests, in order to slow deforestation and address climate change.

Ben Blum-Smith is a teacher and mathematician who is exploring the interface between math and democracy. He also works to broaden access to the field, through organizations such as the Bridge to Enter Advanced Mathematics and the Bard Prison Initiative. 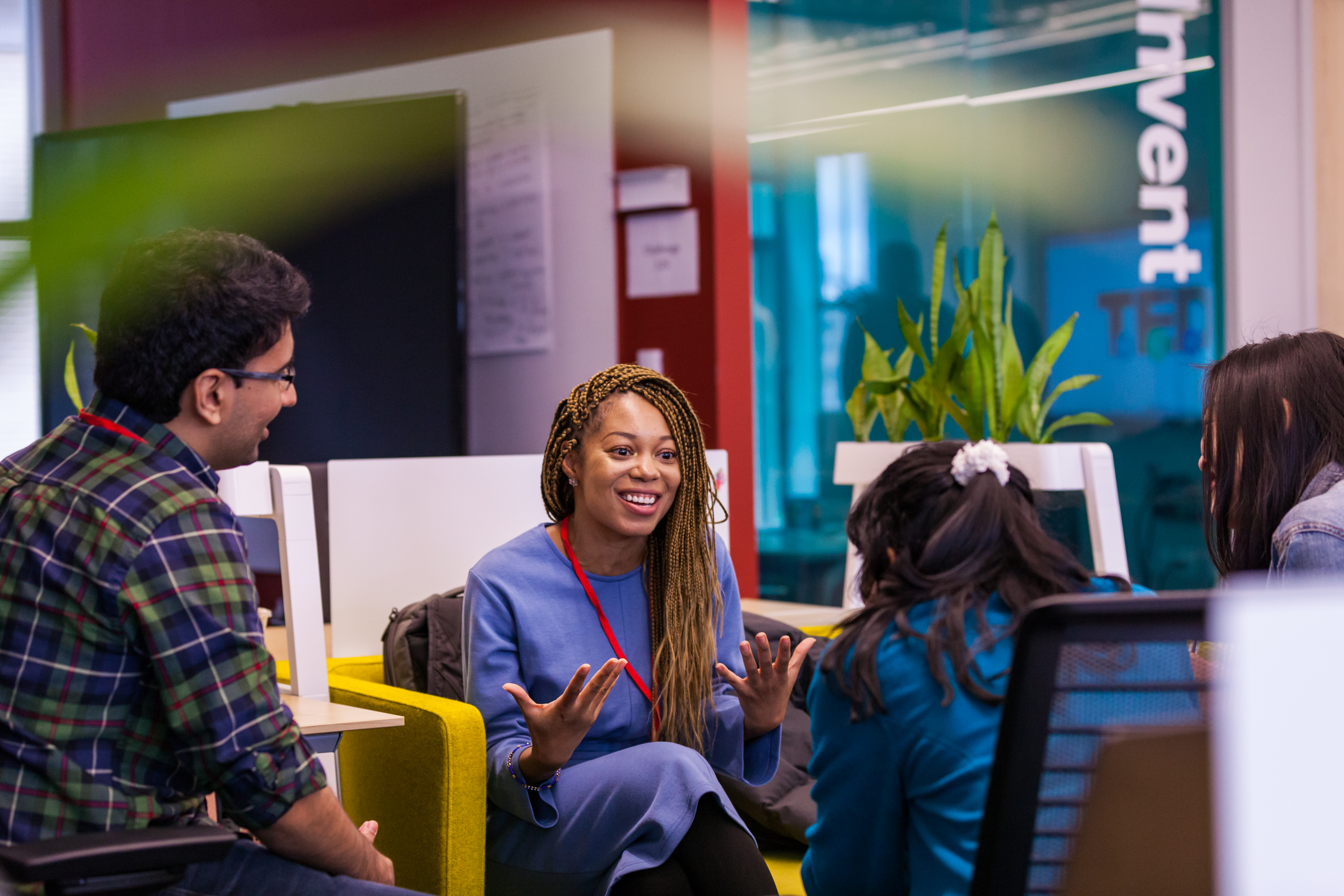 Catie Cuan is a dancer, choreographer and roboticist who is Artist-in-Residence and a Research Technician at the Robotics, Automation and Dance (RAD) Lab at the University of Illinois, Urbana-Champaign. She studies how choreography can inform the design of robots to encourage meaningful interactions with humans. Her performances explore themes of technological alienation, the body as data and the collapsing of space/time.

Angélica Dass is a Hispano-Brazilian photographer and creator of Humanæ, an artivist project documenting the wide-ranging skin tones of humanity and challenging the concept of color associated with race and ethnic identity. Now she wants to bring her work into schools, building tools for educators to encourage inclusion and equality. Watch Angélica’s TED Talk!

Ariane de Bonvoisin is a writer, coach and entrepreneur focused on personal development who has lived all over the world (most recently in Cape Town). She previously worked as an executive in media and venture capital and also launched her own startup. She has just published a children’s book series called Giggles and Joy, and is now building an online initiative to teach children ages 3 to 8 life skills such as honesty, courage and self-compassion and how to navigate their emotions.

Gahmya Drummond-Bey is an education hacker. Inspired by a 2009 statement by President Barack Obama about the success of South Korea’s schools, Gahmya spent 12 years overseas, studying other education systems and developing her own custom curricula around the world. Now she’s back in the US to pass along what she’s learned.

Queen Esther wants to reclaim African-Americans’ rightful place in country music. Through her music, art and essays, she makes the case that American musical traditions as seemingly disparate as bluegrass, country and Americana are deeply entrenched in blues and in the music of West Africa.

After a decade in tech startups and venture capital, Jon Gosier is now producing his first feature film, loosely inspired by his years as part of the crisis-response communities of North and East Africa. The original screenplay is a dramatic thriller that explores the relationship between activism and emerging technology. Watch Jon’s TED Talk! 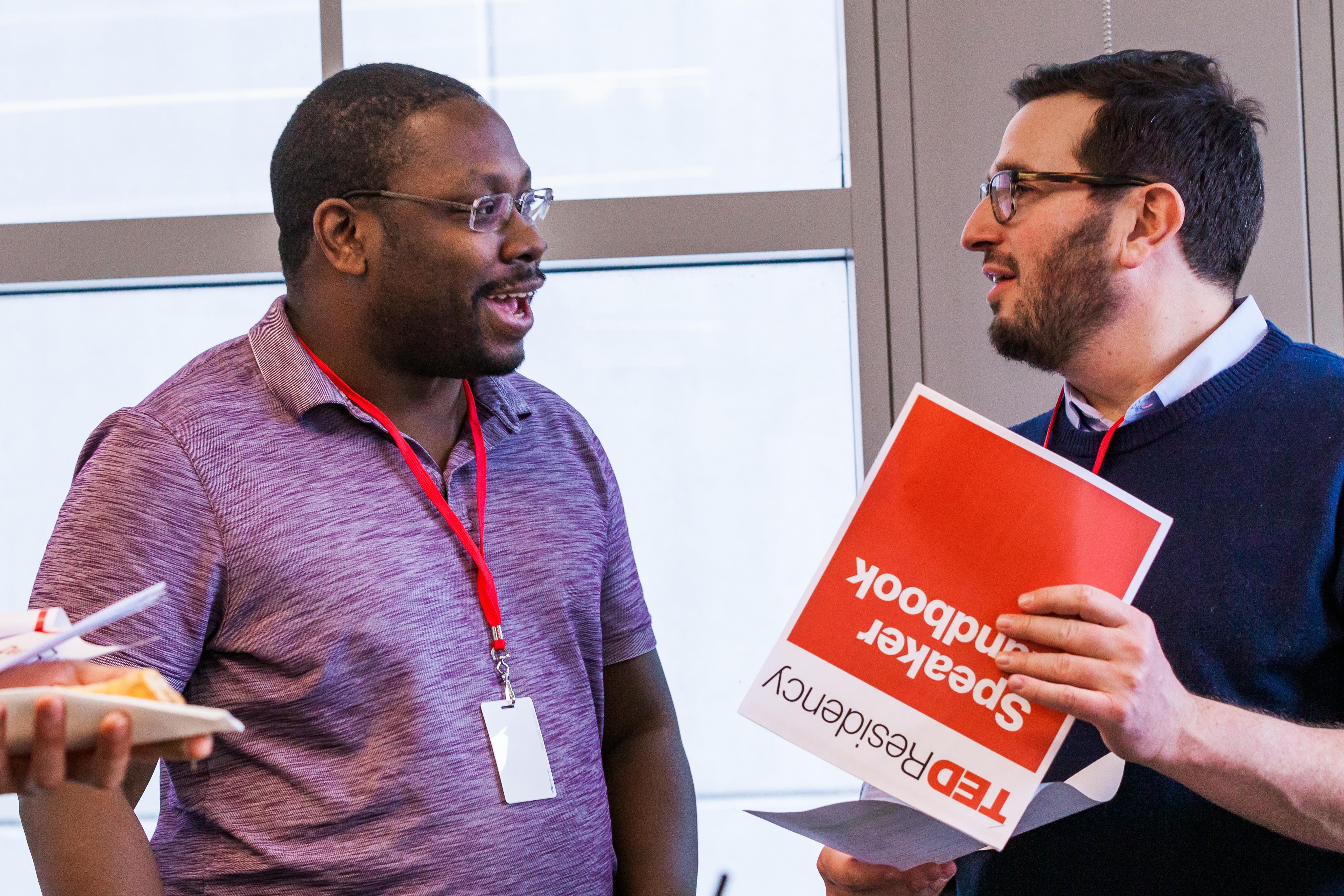 Jon Gosier, a TED Senior Fellow based in Philadelphia, and New Yorker Eron Bloomgarden are both using the Residency as a creative booster shot to their day jobs as venture capitalists. Photo: Dian Lofton / TED

Now in their pre-college gap year, Winona Guo and Priya Vulchi have just visited all 50 US states, collecting personal stories about race, culture and intersectionality. They plan to publish what they’ve learned, hoping to equip every American with the tools for racial literacy. (Watch for Priya and Winona’s TED Talk, posting in early May!)

Caroline McCarthy wants to kill the advertising industry — and then rebuild it. As a former journalist and current executive at true[X], she is building upon years of work with her company founder, Joe Marchese, researching and writing about the current crisis in human attention and how bad practices in advertising exploit it.

Mohammad Modarres is the founder of Interfaith Ventures, a nonprofit organization that promotes cultural understanding. His first initiative is Abe’s Meats, the first-ever product that is both Kosher and Halal, served at Shabbat Salaam dinners across the US.

What is the value of art when it’s made by intelligent machines? Kat Mustatea, a playwright and technologist, is weighing this question, and is also considering what new art forms may start to emerge.

Jessica Pryce leads the Florida Institute for Child Welfare and is ​a faculty member in the College of Social Work at Florida State University. Noting that black children are 40 times more likely than whites to be taken from their families and placed in foster care, she is creating an implementation plan (using artificial intelligence) to help child welfare agencies make ethical, bias-free decisions about when to remove minority children from their families.

Gaurav Ragtah is using artificial intelligence to transform how we acquire and share expertise and to eliminate biases in evaluating people in professional contexts. Building on his experience in machine learning and software engineering, he founded Profillic to surface technical expertise through data, beyond resumes. 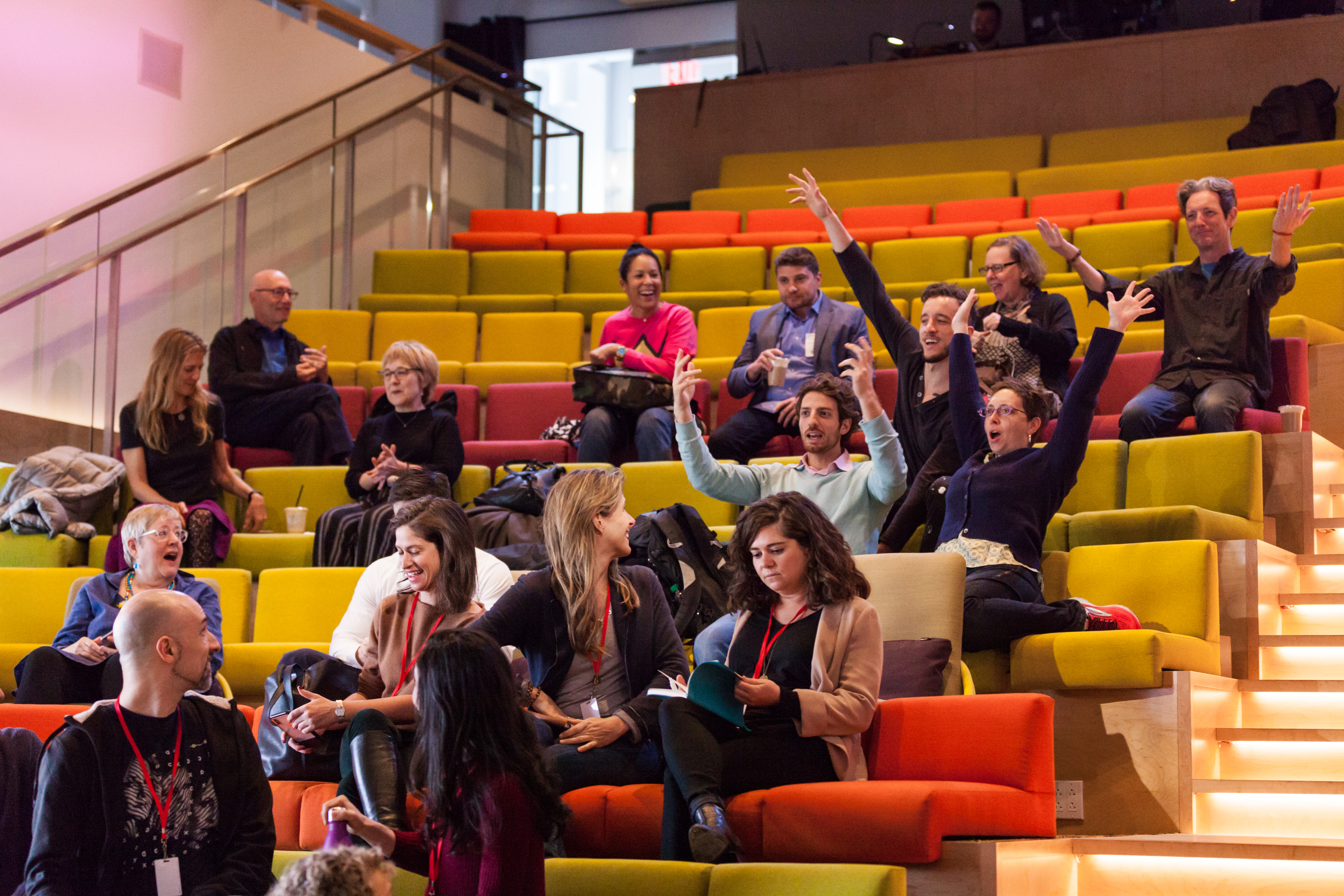 In the office theater for the TEDStart program (also known as orientation): Residents from the fall 2016 class offer a hearty welcome to the newbies. Some 30 alumni dropped by in all. Photo: Dian Lofton / TED

As a doctor who specializes in reproductive psychiatry, Alexandra Sacks helps women navigate their emotions around pregnancy. She thinks we should look closer at matrescence, which provides the same hormonal roller coaster, physical changes and role adjustments as other transitions like adolescence, but is currently being misunderstood as postpartum depression.

The spring 2018 Residency will culminate with a program of talks in late May. Want to become a Resident? Applications for the fall 2018 Residency (September 10 to December 14, 2018) open April 9, and will close June 15, 2018. You can learn more at ted.com/residency.