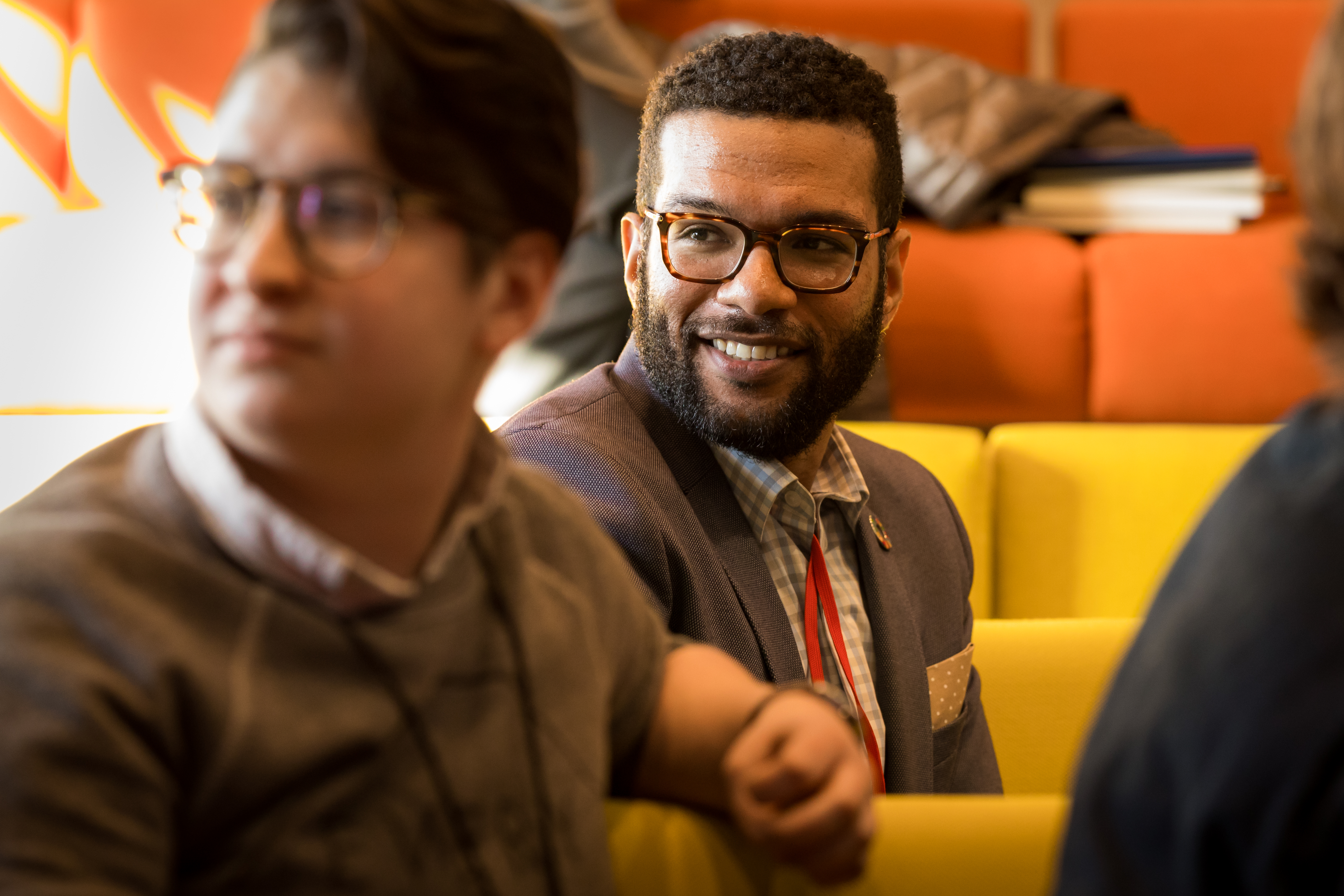 On February 25, TED welcomed its latest class to the TED Residency program, an in-house incubator for breakthrough ideas. These 11 Residents will spend 14 weeks at TED’s New York headquarters, working and thinking together.

Lindsay Amer is a content creator (pronoun: they/them) who makes educational videos for kids — and their parents. Their critically acclaimed web series, Queer Kid Stuff, gives children a vocabulary to help them express themselves. Amer is also developing a full-length screenplay for a family-friendly queer animated musical.

Daniel Bögre Udell is the cofounder and director of Wikitongues, a community organization that tackles language preservation by recording oral histories. UNESCO estimates that of the world’s 7,000 known languages, about 3,000 are at risk of being lost. He’s prototyping a toolkit to make it easier for people to get started on language preservation. 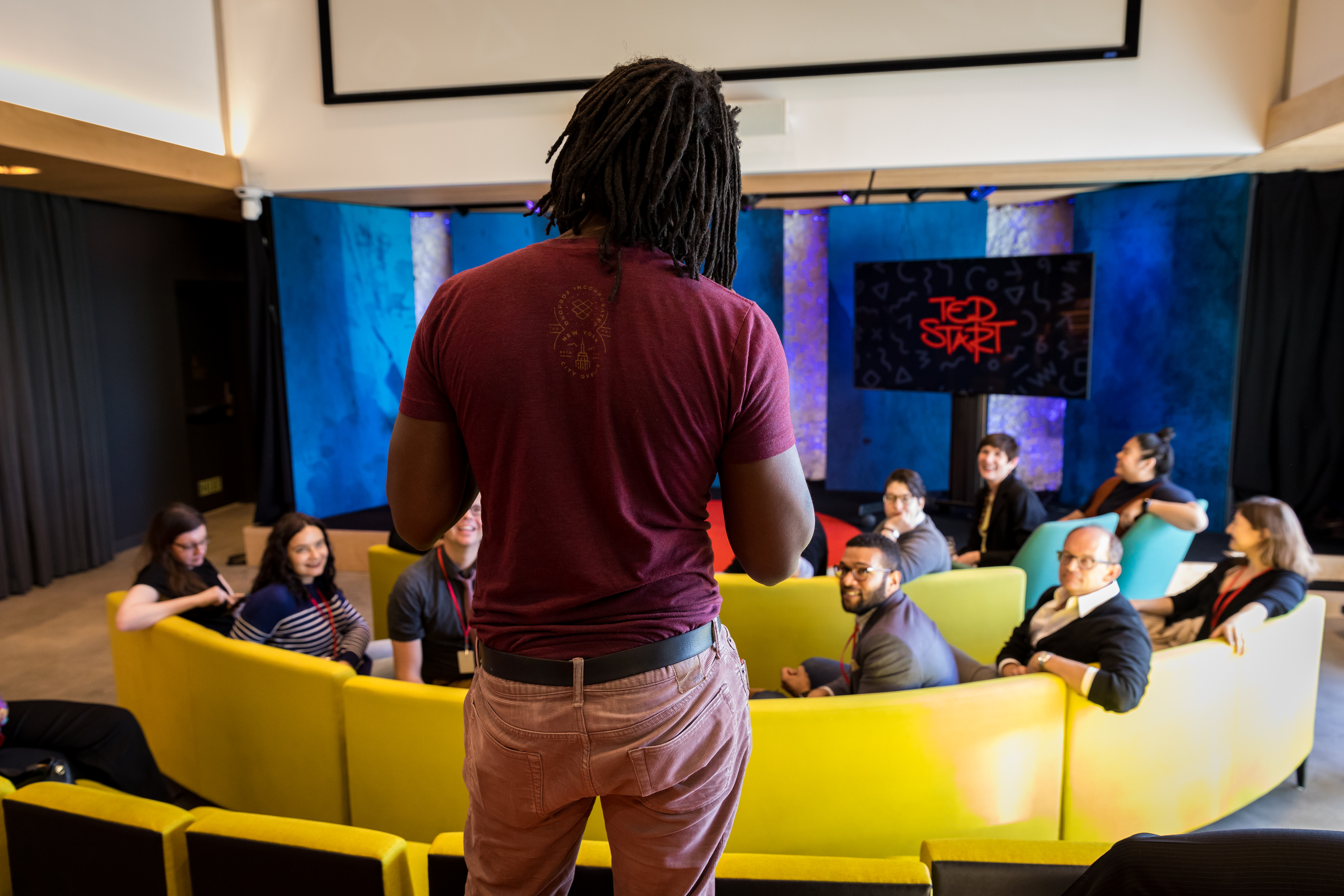 Young men from the Bronx, New York, balance dual lives, says Kenneth Chabert. Often, they have to establish a reputation in their neighborhoods in order to survive, while also doing well in school so they can get out. Chabert addresses their quandary through his organization, Gentleman’s Retreat, which teaches a select group of young men emotional and conversational intelligence, helps them get into into top colleges and universities, and provides experiences to extend their horizons. 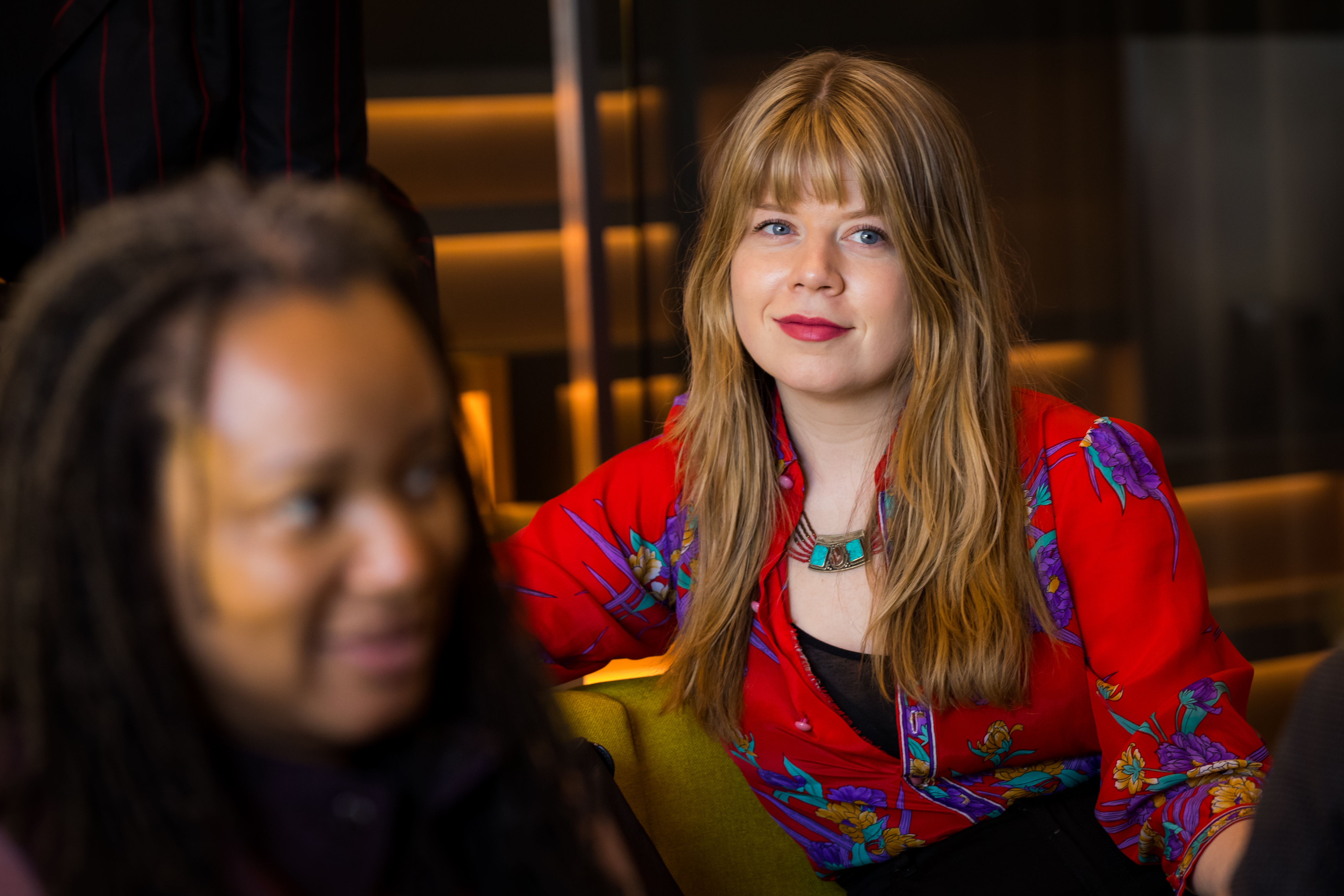 Social entrepreneur Robert Clauser wants to pair nonprofits with the ready resources (both human and financial) of corporations, in a kind of philanthropic matchmaking.

Digital game developer and programmer Charlotte Ellett thinks that social deduction exercises such as Werewolf and Mafia aren’t just party games. As the cofounder of C63 Industries, she works on tools and competitive, mind-bending PC games to help people develop their social skills.

Venture investor and writer Natalie Fratto explores how adaptability may be a form of intelligence. To grapple with constant technological change, she believes, our Adaptability Quotient (AQ) will soon become the primary indicator of success — leaving IQ and EQ in the dust.

Jessica Ochoa Hendrix is the CEO and cofounder of Killer Snails, an educational game startup that creates award-winning tabletop, digital and virtual reality games and brings science to life in K-12 schools. To date, she has piloted her curriculum in more than 50 schools across 26 states, under the auspices of the National Science Foundation. 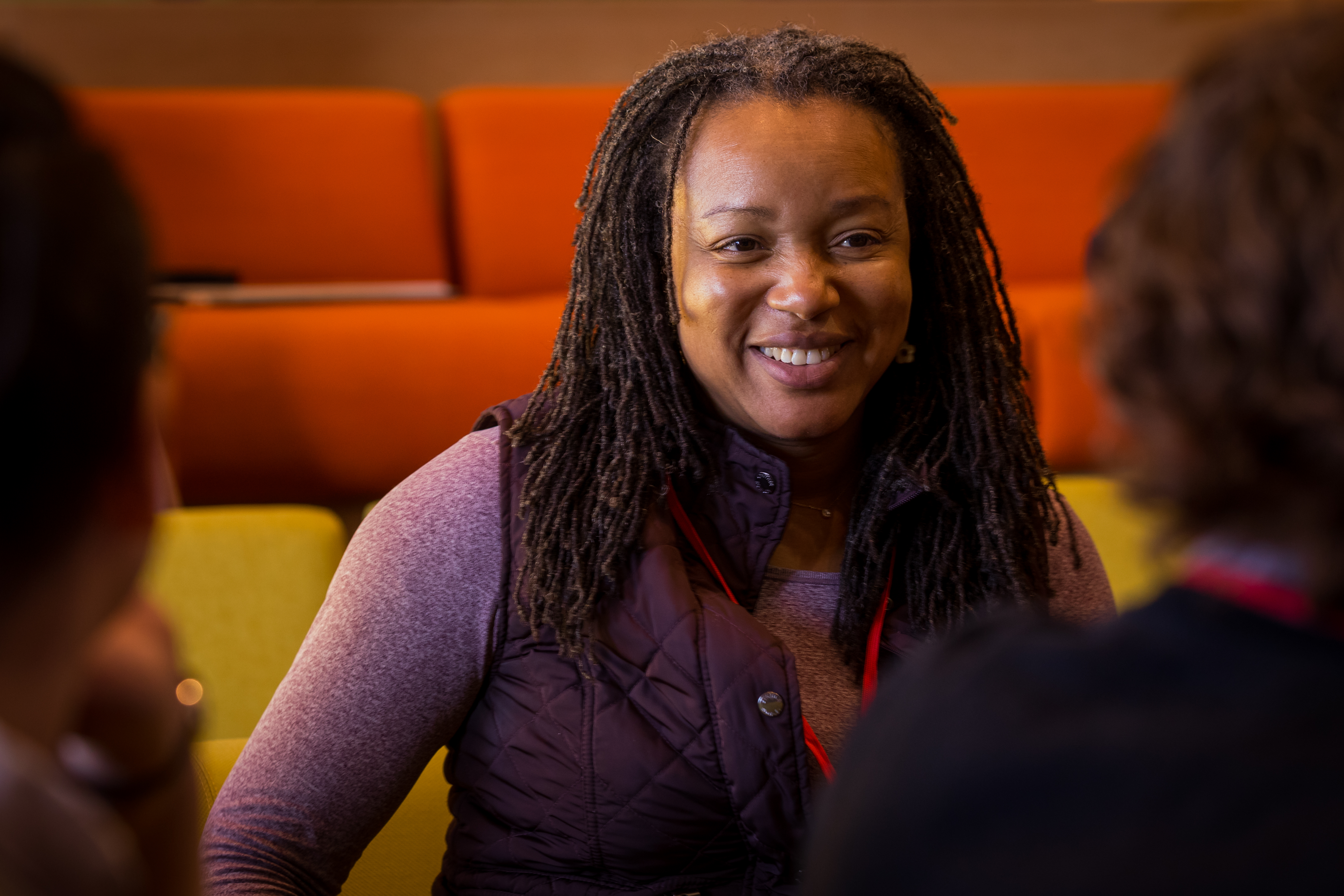 Priscilla Pemu, MD, is an academic general internist who has developed a clinical platform to help patients with chronic diseases improve their health outcomes. Her patients receive digital health advice coupled with a coach from their church or community to hold them accountable — with stellar results! She now analyzes the conversations between participants and coaches to figure out what worked and how.

Michael Roberson, an adjunct professor at the New School and at Union Theological Seminary, is a longtime organizer in New York City’s ballroom community — which drew mainstream notice courtesy of Madonna’s 1990 “Vogue” video and Jennie Livingston’s 1991 documentary Paris Is Burning, and has since developed into a global subculture. Roberson is also a creative consultant for the FX series Pose. He believes that the family dynamics created within ballroom culture can teach the rest of us how to develop healthy communities.

Emmy Award winner Matt Wilson spent a decade as a medical clown at Memorial Sloan Kettering, helping children with life-threatening illnesses. He now researches how arts and performance improve health. He recently graduated from NYU with a master’s degree exploring the phenomena he has witnessed. (PS: He’s also a sword swallower!) 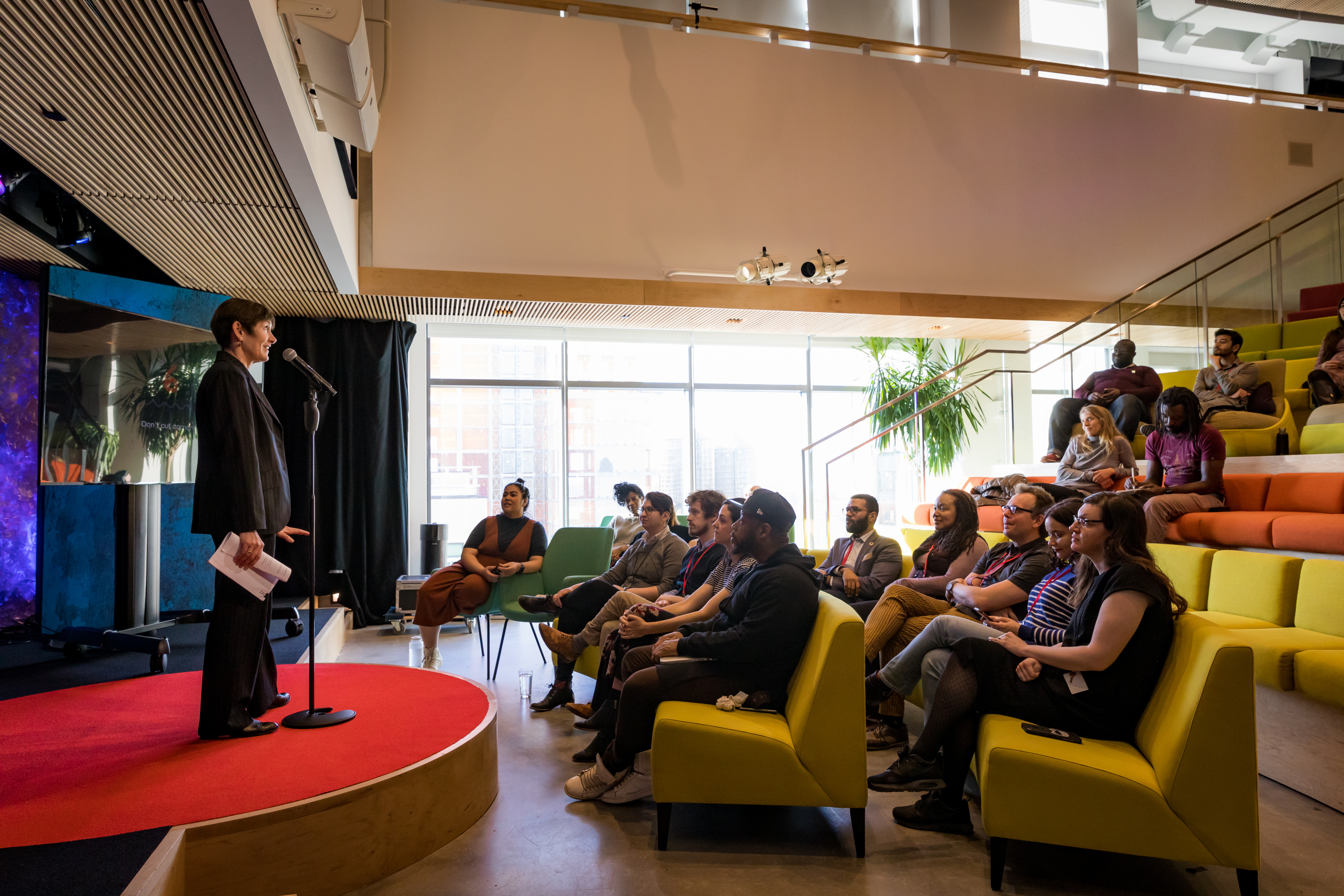 Britt Wray, PhD, is a science writer and broadcaster who crafts stories about science, society and ethics. In her forthcoming book, she argues that climate change is creating intimate dilemmas in our lives, including whether and how to raise children. She’s the cohost of the BBC podcast Tomorrow’s World and is a contributing host on Canadian Broadcasting Corporation’s flagship science show The Nature of Things.

The new spring crew is joined by alumni from previous Residency classes, back to continue the important work they do. Among them is the founder of a sustainable food venture, a designer creating solutions for animals, and a playwright looking at the role technology plays in art. The returning group includes: Heidi Boisvert, Anindya Kundu, Mohammad Modarres, Kat Mustatea, Marlon Peterson, Mariana Prieto and Michael Rain.