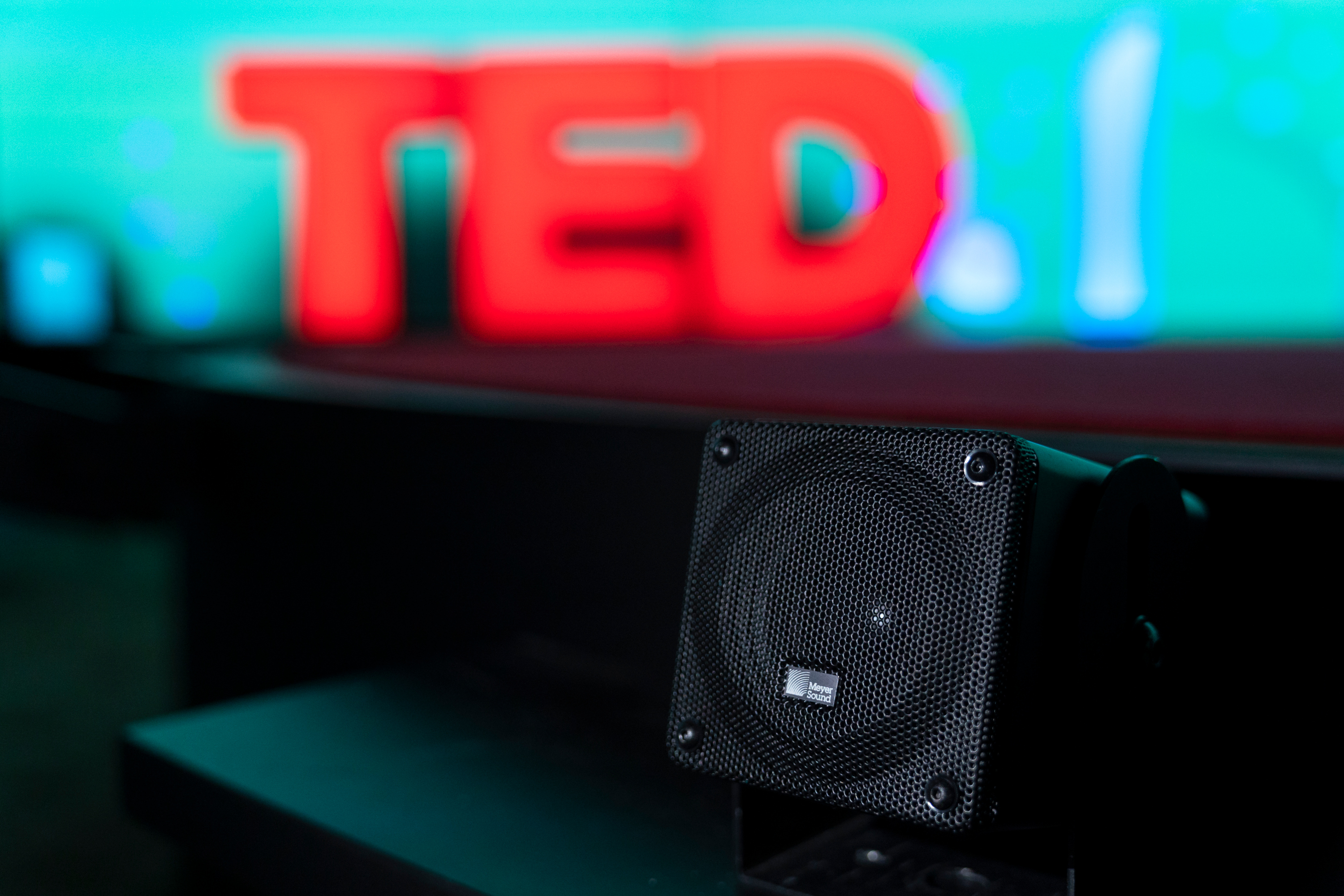 Given John Meyer’s roots in the Bay Area’s 1960s radio and music scenes, and his innovations for just about every acoustic application — electronically dampening ambient noise in loud rooms, building 3D Cirque du Soleil soundscapes, and helping develop the Grateful Dead’s revolutionary “Wall of Sound” — it’s not surprising to spot his team behind the scenes at TED. With his state-of-the-art audio production platforms and speaker systems, Meyer and his colleagues at Meyer Sound have significantly improved TED’s music and voice reproduction game, and opened the door to a world of new sonic possibilities at TED’s events — including an on-site audio refuge at TED2019 to provide conference-goers with a serene space to digest heavy ideas.

Meyer is a living legend, and accordingly, I caught up with him as he’s revisiting one of his most legendary projects: the sound design of Apocalypse Now, which first toured the US in 1979 using Meyer’s subsonic speaker system. Director Francis Ford Coppola wanted audiences to literally feel every explosion in the film, and he tapped Meyer to provide special subwoofers that would reach to 30 cycles per second (or Hz) — well below the range of human hearing — to provide that impact. For the film’s 40th-anniversary screening at the Beacon Theatre in New York City, Meyer’s speakers sunk even lower to a gut-rumbling 13 Hz.

“Sound can change your emotion more than any other tool that’s ever existed,” Meyer says. “The movie people know this, because they change the sound to change the mood of a scene. They’ve known this for 50 years; neuroscience is just studying this now. And we know that low frequencies — which we’re doing for Apocalypse Now — create emotion.”

This exploratory and thoughtful approach to sound and all its possibilities forms the cornerstone of Meyer Sound (which Meyer and his wife, Helen, founded in Berkeley in 1979), and it’s enshrined in their motto: “Thinking sound.” “‘Thinking sound’ embodies our philosophy of making sound something that matters for everyone in all situations,” Meyer explains. “Sound is a crucial contributor to quality of life, because it is all around us all of the time.” By developing new technologies, Meyer Sound constantly seeks to “create audio solutions that heighten the quality and enjoyment of each of these kinds of sonic experiences.” 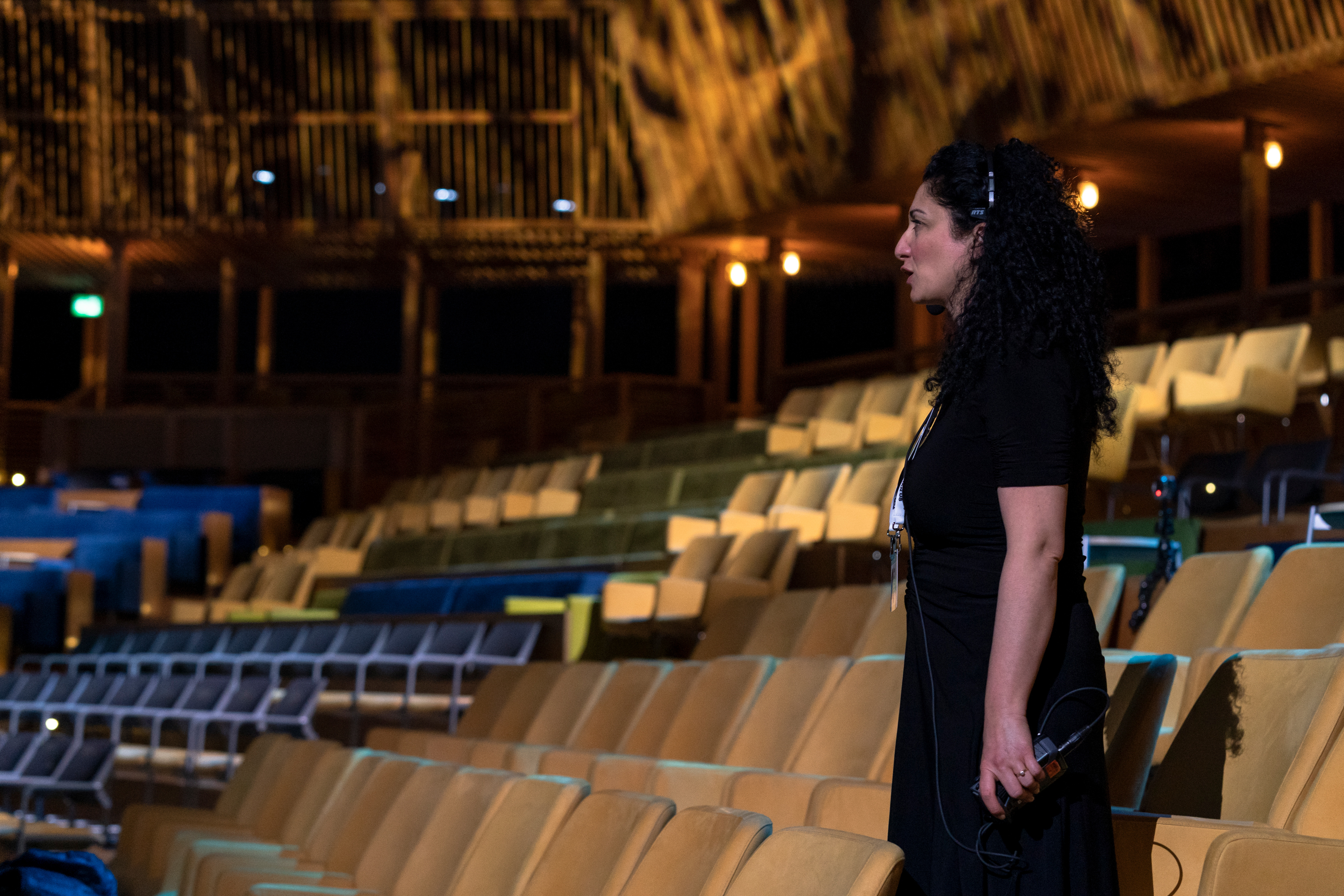 If this kind of thinking sounds familiar, it’s because it dovetails perfectly with the values of TED’s production team, for whom sound and video are equal ingredients in an ideal conference experience. Mina Sabet, TED’s Director of Production and Video Operations, sought to up the ante of TED’s audio production — and Meyer Sound was a “clear choice” to reboot the sound system for the 2019 Vancouver conference.

Building a PA system that blends into the background, doesn’t block anyone’s view of the stage, and yet still provides adequate sound coverage is a daunting task. According to Sabet, “One specific red flag we noticed when sitting in the theater was that our front rows” — specifically couches arranged at the front of the theater — “did not have a full audio experience.” The existing speakers were high overhead, creating a sonic void at the front of the hall. Loudspeakers must compete with lighting rigs and video projectors for ceiling real estate, and they had lost that battle. Speakers in the aisles are both hazardous and, well, ugly.

The solution was both innovative and comically obvious — hide speakers under the furniture. Sabet says that Meyer Sound’s “UP4-Slim speaker could fit nicely under the couch, face the people in the couches, and never be visible to the audience or our cameras. It was a perfect fit.” From there, the team optimized the rest of the room — as Meyer’s business manager John Monitto says, “making sure that we had equal coverage between all the seats, and just really making it a dynamic space… completely blanketing the seats with sound.” 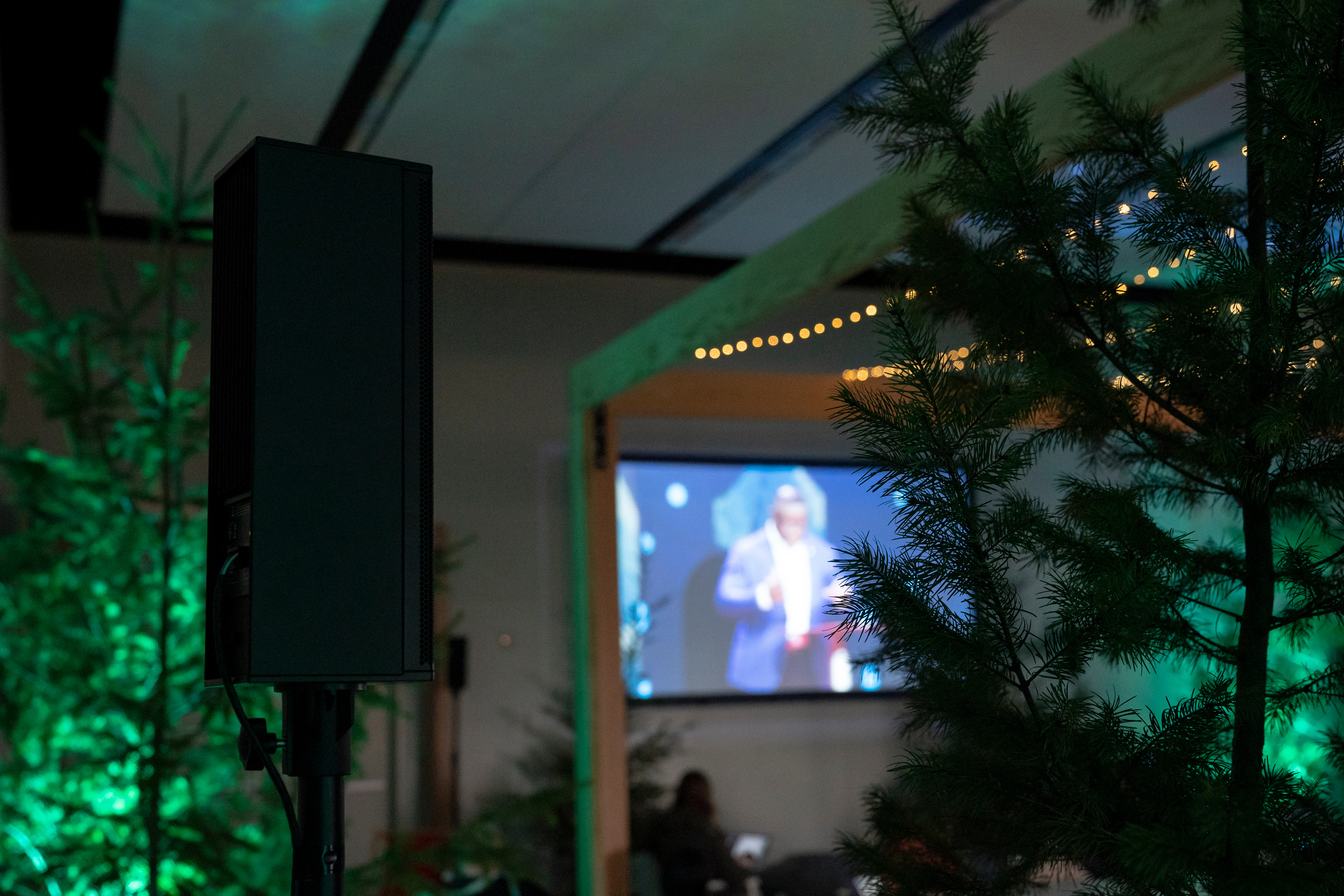 This quiet simulcast room became a chillout lounge between sessions of talks, thanks to a tranquil sound environment from Meyer Sound. TED2019: Bigger Than Us. April 15–19, 2019, Vancouver, BC, Canada. Photo: Dian Lofton / TED

Once Meyer Sound had conquered the challenges in the main theater, they rewired the simulcast rooms to provide relaxed, uncrowded viewing spaces away from the main theater. As they explored the theme of relaxation, the teams began to wonder — how could they design a space that is not only a great place to listen to the conference, but also a meditative environment where attendees could really lose themselves and quietly observe the torrent of ideas they’d just experienced? More important, how could the production team exploit Meyer Sound’s powerful sound design suites — which can enable small halls to sound like cathedrals or caverns, or muffle echoes to make large spaces sound tiny — to their fullest potential?

As Monitto tells it, “TED had brought us the idea of a room that has two purposes: one, it’s a simulcast space [where] you can watch a talk happening live. [Two], between those sessions, when there’s not somebody on a stage or they’re not presenting material, there’s a place to go to be able to just chill out. And that’s what this room was all about. They brought us a theme of ‘Under the stars,’ and they wanted us to run with it.” And so the “Under the stars” room was born, centered around an interactive ceiling installation that would display the constellations of different cultures with the wave of a baton.

Monitto continues: “We did something really creative — creating an outdoor theme, with an audio soundscape that allowed you to just kind of chill out and relax.” By manipulating high-quality recordings of wind, water, insects and birds flying overhead with Spacemap — an audio matrix that maps up to 288 input sources to output locations — the Meyer Sound team created the illusion of an outdoor cinema under the stars, with sounds not only drifting between speakers, but also soaring overhead and far away. “It just was a real nice place to hang out,” Monitto says.

Leveraging sound to redefine spaces and moods within the conference venue is just the beginning — TED and Meyer Sound have a wide spectrum of challenges and possibilities ahead of them. Using their boundless curiosity, ingenuity, and creativity, both teams seek to redefine the aesthetic boundaries of their events — and seeking to master data-driven tools to achieve this is perhaps the most daunting task of all. As John Meyer puts it, “We [can analyze sound], but it’s like analyzing food — it’s hard. Analyzing whiskey or anything like that with chemistry is hard to figure out. Does it taste good?” As they enter their multi-year partnership, TED and Meyer hope to deliver complex, rich, and five-star flavors to audiences in their theater and in rooms at TED’s flagship conference in Vancouver for years to come. 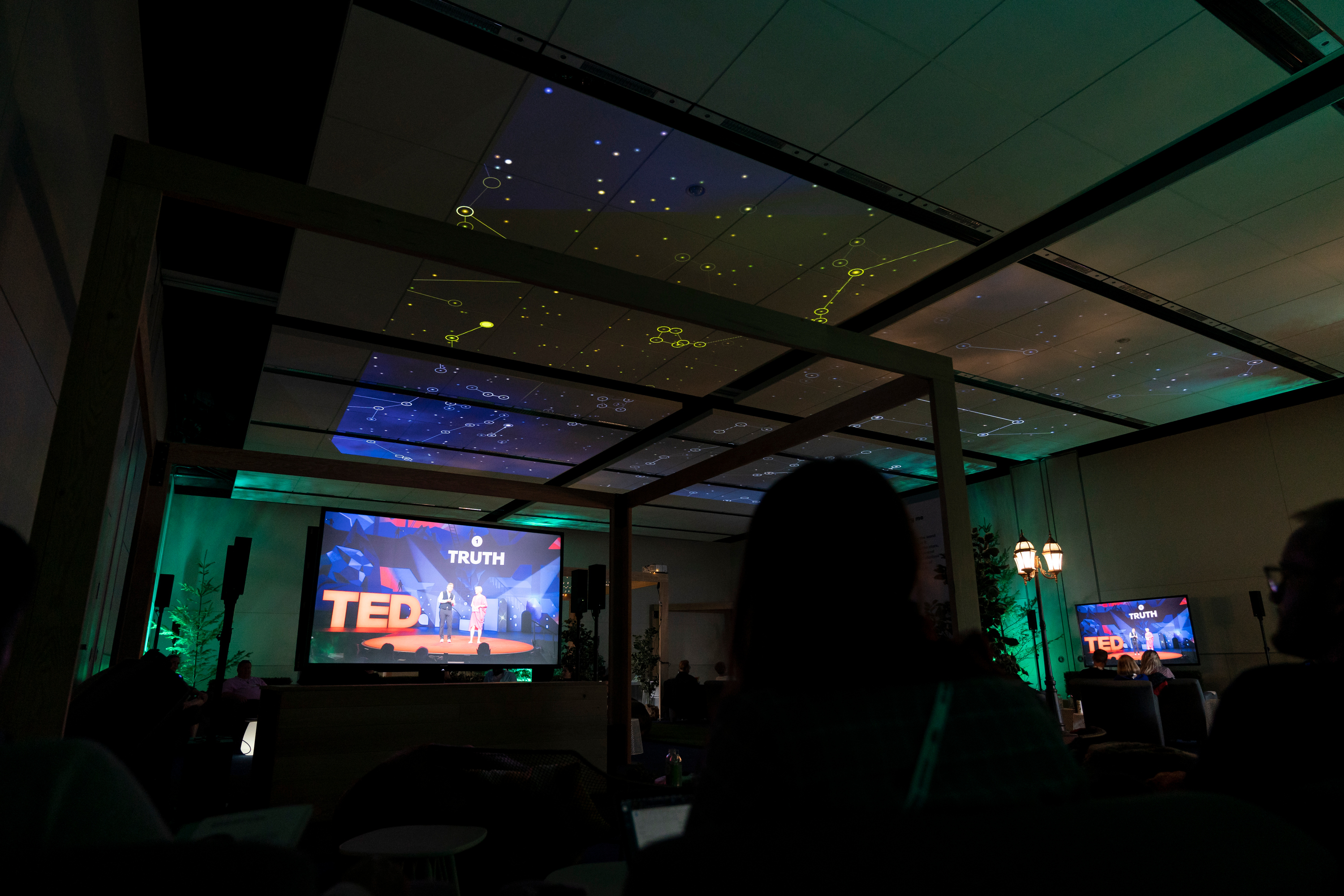 A meditative soundscape and a ceiling full of stars turned this simulcast space into a calm, relaxing environment, thanks to sound design from Meyer Sound. TED2019: Bigger Than Us. April 15–19, 2019, Vancouver, BC, Canada. Photo: Dian Lofton / TED