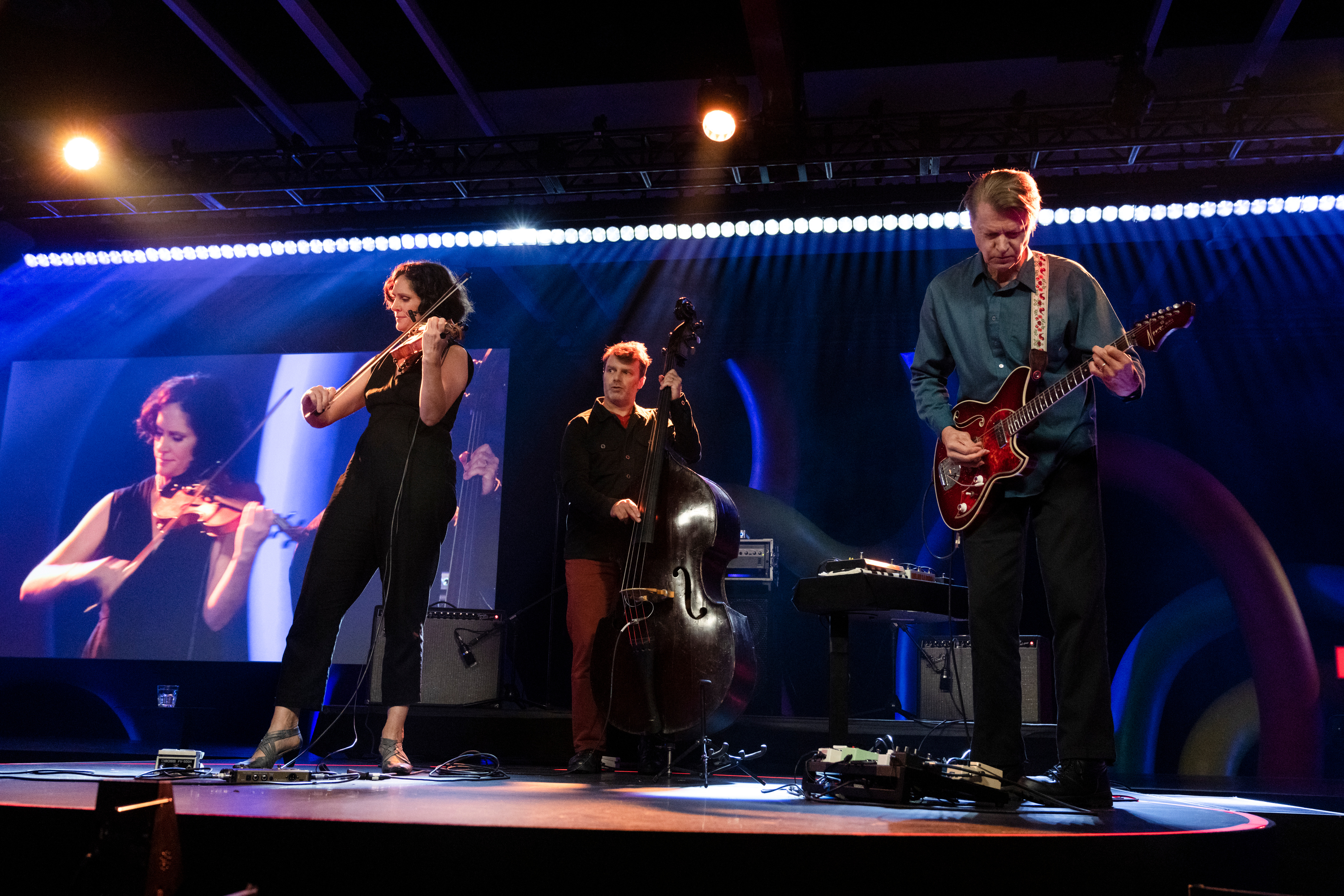 Session 2 kicked off the first full day of TEDMonterey with six speakers and one performance ready with an invitation for you to think differently, wonder ceaselessly and transform the ways you interact with the world — big and small. 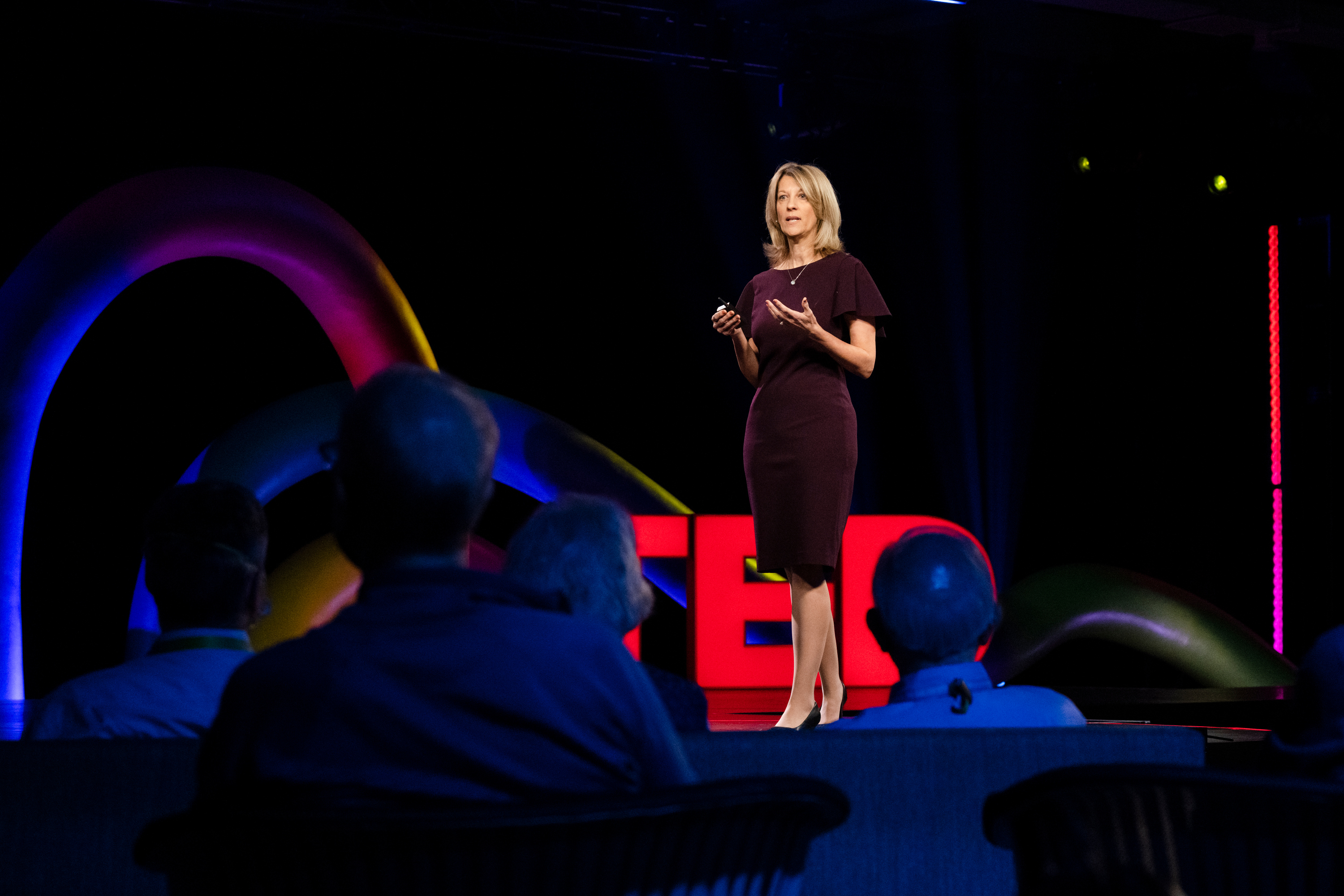 “We have the resources we need to begin repairing our broken systems,” says economist Stephanie Kelton. “But we have to believe it’s possible.” She speaks at TEDMonterey: The Case for Optimism on August 2, 2021. (Photo: Gilberto Tadday / TED)

Big idea: We should consider government spending as a financial surplus to the country rather than a deficit.

How? When it comes to government spending, Stephanie Kelton says we ask all the wrong questions. Instead of asking how we’ll pay to build new affordable housing or expand Medicare, she believes we should focus on two questions: Are these things worth doing? And do we have the real resources — the people, equipment, raw materials and technology — to do them? Kelton is a proponent of Modern Monetary Theory, which holds that governments should issue currency to cover their costs, rather than raise taxes to pay for infrastructure or other investments. “When the government spends more than it taxes,” she explains, “it makes a financial contribution to some other part of the economy.” With a better understanding of public money, she hopes we can stop debating about government debt and instead address the healthcare, housing and educational deficits that really matter.

Big idea: It’s time for more democratic workplaces (and industries) and platform cooperatives are one way to make this happen.

How? Cooperatives date back almost 200 years, powered by groups of people who together equally work and decide on how a company operates. So what does it look like when modern tech companies merge with this tried-and-true model of business? Trebor Scholz introduces the “platform cooperative,” a new way forward creating a democratic company of empowered workers. Platform users are the owners who choose things like how much they get paid, decide what customers should be charged and determine what data is collected. One such organization is Up & Go, a platform for house cleaners that’s already demonstrating a bliss point between autonomy and support for workers and invites the question: Why do these co-ops work so well? Scholz explains that companies have no obligation to fiduciary shareholders, the staff co-own the company and, in times of crisis, they have proven to be a resilient source of income. While there is no one-size-fits-all solution for business, he makes a case for hope when it comes to co-op platforms having the potential to change entire industries and create a legacy of equality. “When markets fail and government safety nets break down, people turn to each other,” he says. 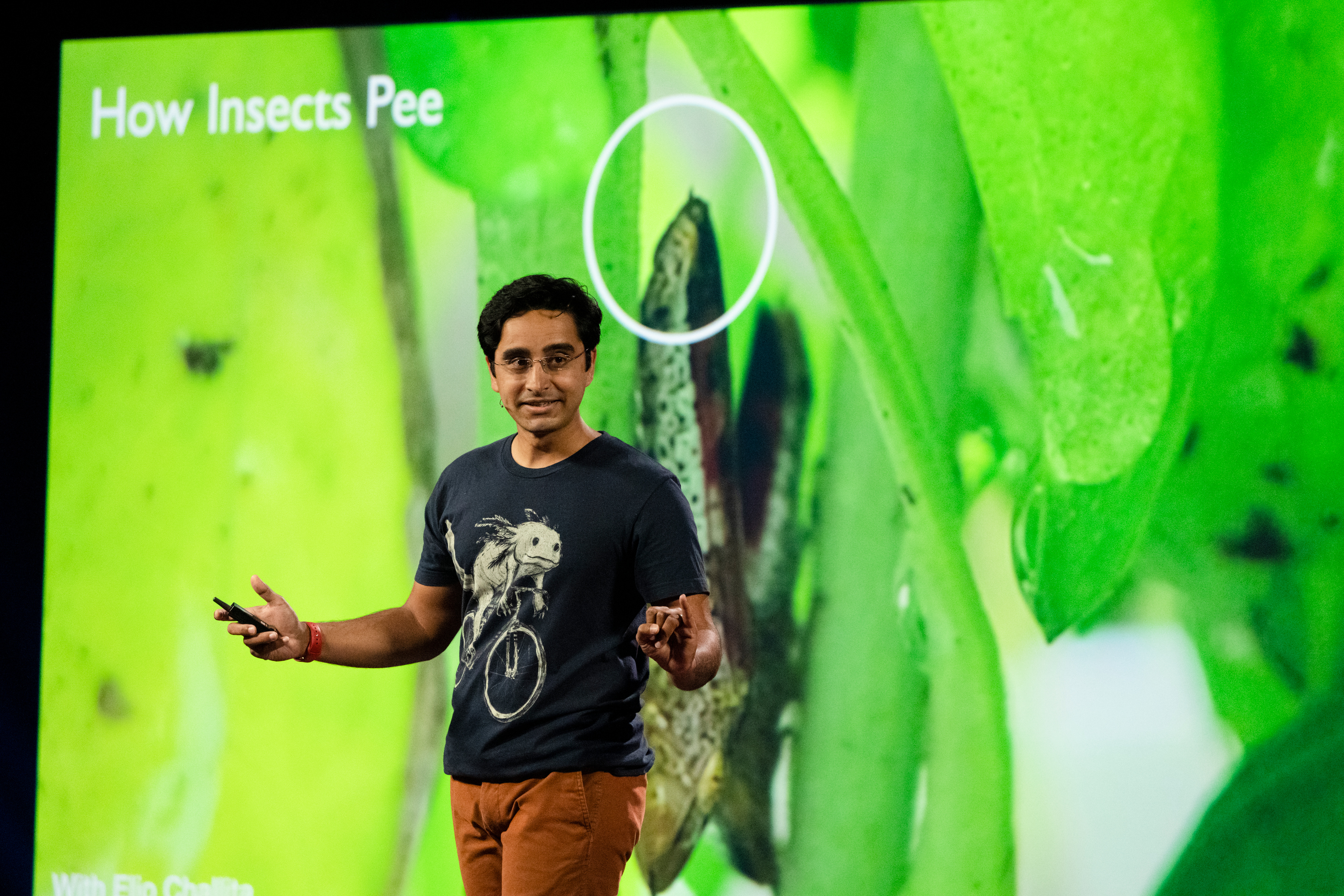 Saad Bhamla shares his infectious curiosity about insects and insect pee at TEDMonterey: The Case for Optimism on August 2, 2021. (Photo: Bret Hartman / TED)

How? Meet the sapsucker Homalodisca vitripennis, also known as the glassy winged sharpshooter, an insect that flings its pee at up to 40 g-forces (or forty times faster than a sprinting cheetah). Enter the scientist who wants to know how these creepy crawlers engineered their rear ends to propel liquid with such speed: Saad Bhamla. With wild footage of bugs urinating, Bhamla explains the fascinating physics of how insects use their “butt flickers” (yes, that’s the scientific name) to capitalize on the power of surface tension to accelerate their pee droplets with astounding momentum. Bhamla suggests in studying the mechanics, we could potentially harness this genius design to expel liquid from waterlogged smartphones. But for him, the real benefit is all about sparking curiosity, making discoveries and learning about the natural world around us. 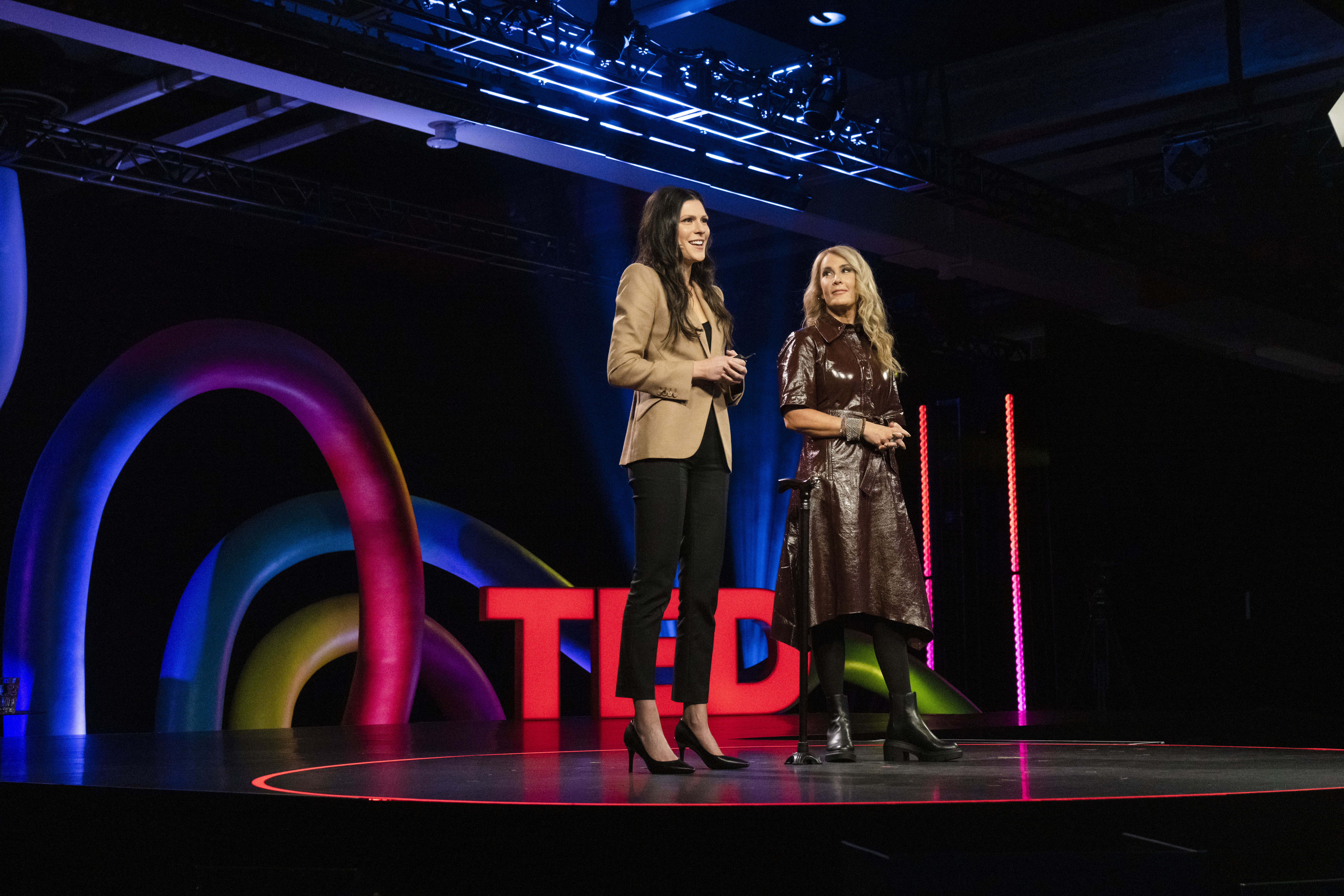 Naomi Bagdonas and Jennifer Aaker talk about the benefits of leading with humor speak at TEDMonterey: The Case for Optimism on August 2, 2021. (Photo: Gilberto Tadday / TED)

Big idea: Humor makes our lives better in tangible ways. Even if you’re not a comedian, you can prime your brain to find the funny in any situation.

How? Jennifer Aaker and Naomi Bagdonas want to make you laugh. As a behavioral scientist and a corporate strategist who co-teach a class on the power of humor in leadership at Stanford, these two women know that even a bad joke can make you feel good. “As far as our brains are concerned, laughing is like exercising, meditating and having sex — at the same time,” Bagdonas says. Plus, humor can improve almost any situation. The duo shares examples of how a little silliness from a CEO makes for a more creative workforce, or how a line of humorous advertising copy can boost a product’s sales. Don’t consider yourself funny? Don’t worry. Aaker and Bagdonas believe humor is a teachable skill and offer a few tips to help all of us find more funny moments. Start by noticing what’s true, they suggest, and the joy and the laughs will follow. 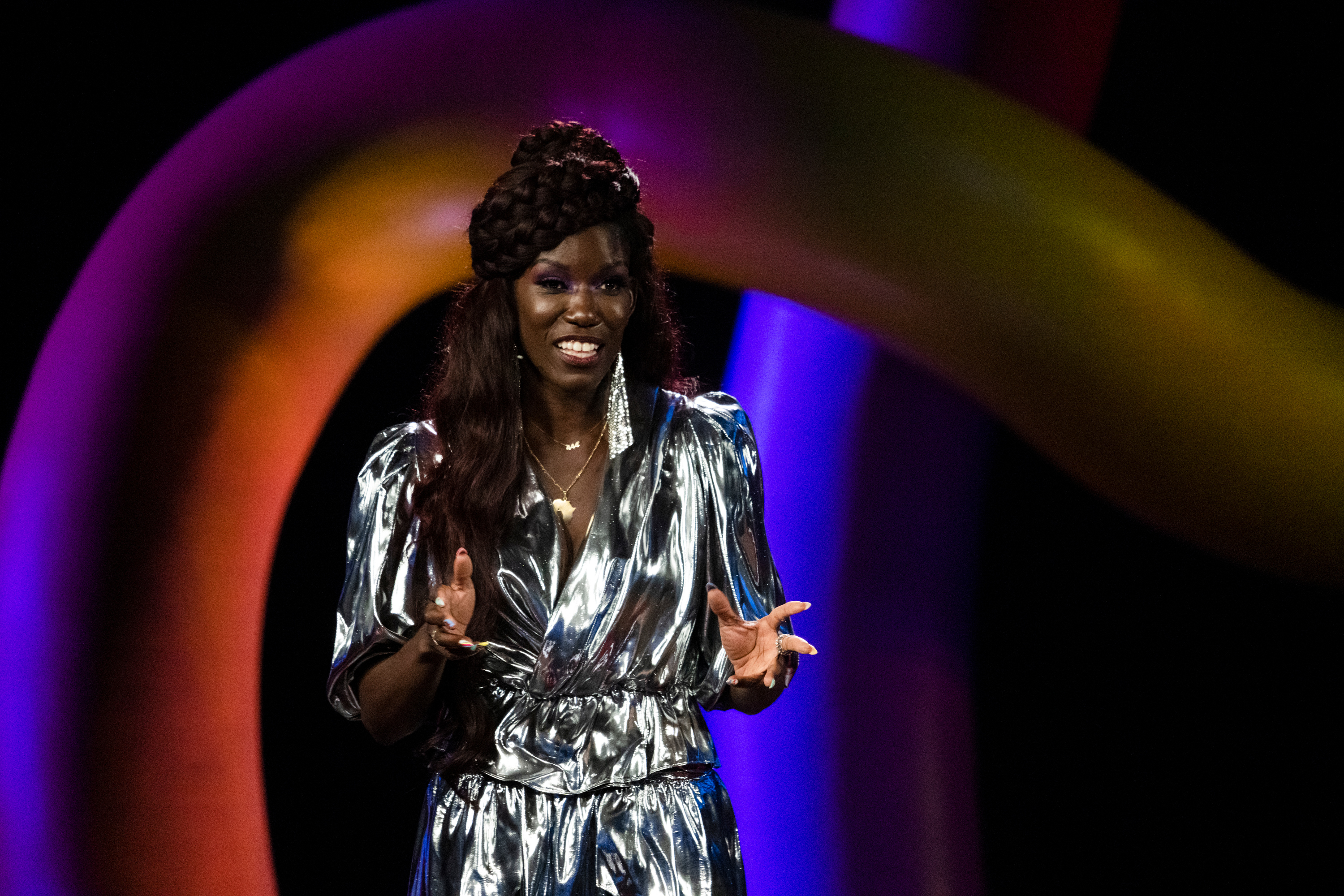 Bozoma Saint John tells us to look at the data with a grain a salt and listen more to our intuition. She speaks at TEDMonterey: The Case for Optimism on August 2, 2021. (Photo: Bret Hartman / TED)

Big idea: Don’t get bogged down in data — for great ideas, plug into your intuition.

How? Your intuition is a gift, says Saint John. All too often, we make decisions based solely on the data, thinking of it as a magical, more convenient shortcut to the right answer. But when we rely too heavily on numbers and facts alone, we sacrifice creativity and can miss out on our best ideas. Illustrating her point with her story of pitching an unlikely rising star at the time (revealed to be the one and only Beyoncé Knowles) for an upcoming marketing campaign to her then-boss Spike Lee, she shares how following her gut paid off in a big way. Ever since that moment early in her career, she’s followed her intuition to make key decisions that define the industry, not follow it. “Data is the pill to calm our insecurities over what we intuitively know,” she says, and she encourages us all to lean less into the data and more on ourselves.