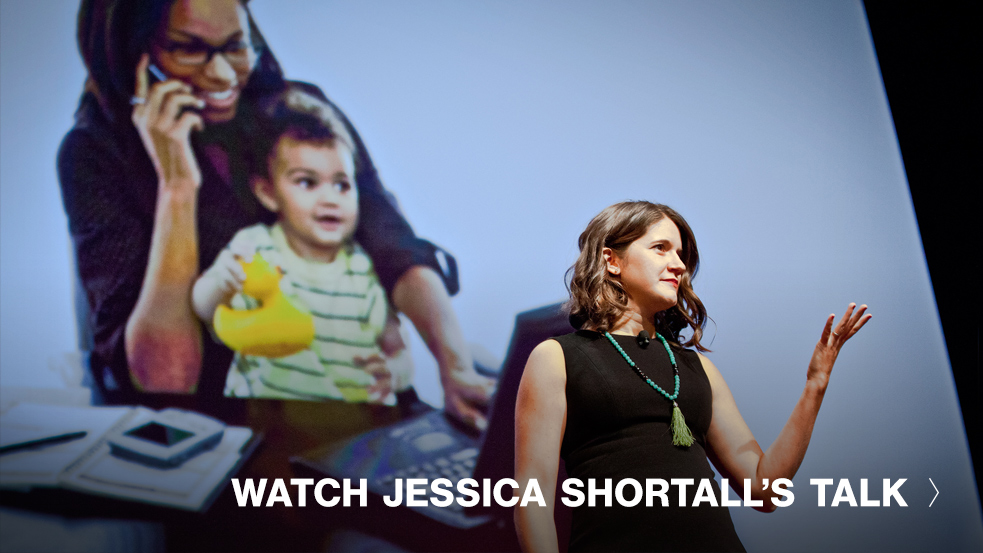 Motherhood without maternity leave. Imagine going back to work only 20 days after giving birth, using up all of your vacation days in lieu of paid or unpaid family leave. In a two-part series for The Atlantic, Jessica Shortall shares how a woman named Tara, after hearing her TED Talk, reached out to her on Facebook, opening up about her experiences. Tara later updated Jessica on the struggles of balancing work with regular nursing and the other demands of motherhood via text message conversations with Shortall, “Leaking thru shirt half way through a 3 hour meeting is pretty awkward. Wow. Glamorous.” Shortall makes not only the moral but also the economic case for paid family leave, as shown by findings of The American Enterprise Institute, a conservative think tank: “Not only do household earnings rise when women go back to work following leave; the overall economy benefits as well.” (Watch Jessica’s TED Talk.)

The wisdom of our life’s work. We spend most of our waking hours working, but besides just making ends meet, is there wisdom to be found in the 9-5? In Time, Dave Isay, founder of StoryCorps, shares the ambitions, struggles and triumphs of working people, including recovering heroin addicts’ hope of opening a museum, a single fast-food-working mom turned forensic anthropologist, and a medical student who, after his father’s murder, became a teacher to help prevent disadvantaged youth from following a dangerous, criminal path. These and other stories are in Dave’s new book, Callings: The Purpose and Passion of Work. (Watch Dave’s TED Talk)

A new “nude.” A nude color crayon or a cute pair of nude ballet flats — “nude” seems to mean “the color of white skin.” A new fashion-tech startup called Mia Pielle plans to challenge that, helping clients find clothes and accessories (like a great “nude” bra) to match their own shade. By analyzing 87 photographs of women all over the world by Angélica Daas, among other data sets, Mia Pielle settled on six skin tones from which a shopper can choose. It’s still in alpha, but this blend of art, fashion and tech should help finally eradicate the notion of one default skin tone. (Watch Angélica’s TED Talk)

The Pacific Northwest’s disaster forecast. On April 18, The New Yorker’s Kathryn Schulz took home the Pulitzer prize in Feature Writing for “The Really Big One.” In the piece, Schulz dives deep into the geology and history of the Cascadia subduction zone, a West Coast faultline overshadowed by its better known but less powerful cousin, the San Andreas, and its potential to unleash a devastating earthquake and tsunami on the Pacific Northwest. With humor and whimsical detail at odds with the piece’s gravity, Schulz reveals the shocking unpreparedness of the region to handle such a powerful quake, and ponders its significance  as a cautionary tale on our relationship to science and nature — and on our very relationship to time. (Watch Kathryn’s TED Talk)

COP21: Open for business.  In December 2015, after a lengthy and delayed process shepherded by Christiana Figueres, 195 countries adopted the first universal, legally-binding climate agreement in Paris. On April 22, not so coincidentally Earth Day, at the United Nations in New York, 130 countries are expected to sign the COP21 agreement, marking the beginning of a year-long period for signatures. At TED2016, Figueres spoke about the need for optimism to bring such a landmark agreement into being, an optimism she retains today, commenting that she believes the agreement is ahead of schedule and will come into effect by 2018 instead of 2020. (Watch Christiana’s TED Talk)

A city flag redesign. In his talk at TED2015, Roman Mars called out Pocatello, Idaho, for having the worst city flag in America. The talk stirred the small city (population 54,3500) into action: They’ve started a city flag design committee. Mars attended the first meeting on April 13 to offer encouragement and advice such as: “You’ll get asked, ‘Why does this matter? Aren’t there better things we could be doing? … Get an answer for that in your head early.” As it turns out, the current flag has only ever been flown outside of Pocatello’s wastewater treatment facility and was never authorized as the official city flag, but somehow ended up in that position anyway. (Watch Roman’s TED Talk)

… and redrawing US borders.The traditional map of the US, with its familiar clear-cut and misshapen lines of 50 states, is geographically correct, but functionally outdated. In The New York Times, global strategist Parag Khanna literally re-imagines the map to reflect the metropolis centers where physical and digital architecture are interconnecting people and economies across state lines. “Economically and socially, the country is drifting toward looser metropolitan and regional formations, anchored by the great cities and urban archipelagos that already lead global economic circuits.” Out April 19, Parag Khanna’s new book, Connectography: Mapping the Future of Global Civilization, explores this idea in depth. (Watch Parag’s TED Talk)

Research gag laws in the UK. Researchers should have the right to speak up and warn about imminent dangers, such as the effects of climate change or an epidemic on the rise. But according to Robin McKie’s article in The Guardian, this may no longer be so in the UK. Astrophysicist Sir Martin Rees, among others, weighs in on the dangers of a new decision made by the Cabinet Office of the UK that bans researchers who receive government grants from using their findings to lobby for changes to regulations or laws. “It would be far too damaging to allow this clause to proceed.” Due to this intense backlash, certain researchers are now exempt from this clause, including those in national academies. (Watch Martin’s TED Talk)

Can we design for happiness? When we think of design, it is easy to think of the book covers, technology and objects that surround us, but graphic designer Stefan Sagmeister proves that design’s principles can be applied to any aspect of our lives, even something as abstract as happiness. Seven years in the making and premiering at the Tribeca Film Festival, his new documentary The Happy Film delves with gusto into an idea he has dabbled with before–designing happiness. Like a true designer, he systematically experiments with three methods of becoming a better, happier person. (Watch Stefan’s TED Talks “Happiness by design” and “7 rules for making more happiness”)

On the brink of change. In essays spanning 25 years and 7 continents, journalist Andrew Solomon’s new book, Far and Away: Reporting from the Brink of Change, published on April 19, captures the stories of places in the throes of cataclysmic change. From his first-hand perch as a foreign correspondent, Solomon describes major events of the 20th and 21st centuries, including the fall of the Taliban in Afghanistan, the end of the Soviet Union, and Qaddafi’s Libya. With characteristic insight and detail, he reflects on the shift in personal identity that occurs when the surrounding culture, politics, and spiritual beliefs change–and the profound role individuals can have in making those changes happen. (Watch Andrew’s TED Talk)