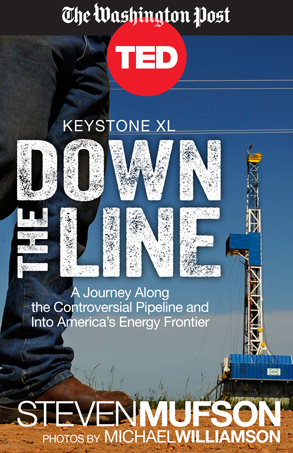 The proposed Keystone XL pipeline would stretch 1,700 miles from Western Canada to the Gulf Coast of Texas. And it has become a touchstone for the bitter fight over America’s energy future. Opponents say the pipeline — designed to bring oil from Canadian tar sands down through the United States — would further bind future generations to outdated oil-based energy policy. Meanwhile, supporters say it represents a step toward America’s energy independence.

Steve Mufson, author of the TED Book Keystone XL: Down the Line and a reporter at The Washington Post, has journeyed along the entire length of the proposed pipeline. He suggests that its real story is twofold: about the American frontier spirit, and about just how far we are willing to go to feed our oil addiction. In the book, Mufson asks readers to consider the Keystone XL debate — beyond the issues of climate change, tar sands and U.S. energy trade policy. He unpacks issues that don’t get as much play in the press: the ups and downs of the North Dakota shale boom, prairie populism in Nebraska, drinking-water concerns near the Ogallala aquifer, Native American communities’ desire to protect their land and burials sites along the Trail of Tears, and ranchers’ objections to the use of eminent domain by Canadian companies.

In many ways, the Keystone XL pipeline serves as a larger metaphor, Mufson says, illuminating the vast energy infrastructure it takes to sustain the American lifestyle. It underlines the choices we make in pursuit of short-term comfort. Which risks are we really willing to take?

To give you a taste of this riveting read, check out an excerpt from the book’s preface:

In spring 2012, I proposed an unusual road trip, one that would trace the full 1,700-mile route of the proposed Keystone XL oil pipeline. The pipeline project, which I was covering for The Washington Post, had aroused intense controversy. TransCanada, a Calgary-based company, had applied for an international permit from the U.S. State Department, something that had never raised many hackles before. But activists had turned the pipeline into an environmental litmus test for President Obama. In late August and early September 2011, pipeline foes protested outside the White House; more than 1,250 were arrested. The police carted off the likes of Middlebury professor Bill McKibben, actress Daryl Hannah and renowned climate scientist James Hansen. Later that fall, thousands of protesters surrounded the White House.

What made this pipeline different from the more than 2 million miles of existing oil and natural gas pipelines that had been built in the United States with little fuss or fanfare? A journey by car would provide a window onto what this policy debate looked like at the ground level.

The first stop: The gaping black pits at the oil sands, or tar sands, of Alberta, Canada, the source of the oil that would flow down the Keystone XL. Then a quick flight — to avoid driving a perilous highway full of sleepy truck drivers — to Edmonton. There in a rented car — a Ford Flex that made up in roominess what it lacked in grace or style — I set out, accompanied by Post colleagues photographer Michael Williamson and videographer Whitney Shefte and my 18-year-old daughter Natalie, who jumped at the chance to see those vast stretches of America.

From Edmonton, we drove through Alberta and part of Saskatchewan, then down the spine of America to the Texas Gulf Coast. We visited spacious corporate headquarters and crammed trailer parks, ranches and farms, boomtowns and dead towns, a border town of nine people and a century-old oil refinery. We attended a Nebraska cookout and an Oklahoma pow-wow. And along the way, this inanimate pipeline came to life.

It became clear that the real story of this pipeline permit was one about American frontiers — the lengths to which we go for oil supplies and the intrusive effects that quest causes all the way down the line.

Each segment of the trip touched on different issues: climate change and the oil sands; the U.S. energy trade with Canada; the North Dakota shale boom and its woes; prairie populism in Nebraska and pipeline politics; the Ogallala aquifer and the threat of leaks; Native Americans and their desire to protect land, water and burial sites along the old Trail of Tears; the fight of ranchers and farmers against a Canadian company’s right to eminent domain; and why both oil sands producers and Texas refiners want to see the pipeline completed.

Since the journey, the Keystone saga has continued. The Army Corps of Engineers approved the pipeline’s southern leg, and when construction began protesters in east Texas turned to civil disobedience. The new Secretary of State, John Kerry, has said he would rule soon on the permit needed for the northern segment.

As a journalist for The Washington Post, I take no position on whether the pipeline should be built. But I can paint a picture of the trade-offs. The United States stands at the brink of a sharp increase in oil produced at home and in neighboring Canada. The supplies could upend long-held economic assumptions, slashing our oil import bill, reviving domestic industries and creating jobs. But these resources come with risks. And concerns about climate change and greenhouse gas emissions have tempered any celebration of these newly accessible troves of fossil fuels.

Which risks are we willing to take? As long as the world relies on fossil fuels for transportation and industry, we will face unappealing choices. Drill in the Chukchi Sea off Alaska’s Arctic coast? Or drill in the Gulf of Mexico where a BP well spilled nearly 5 million barrels into the water? Drill thousands of holes in half a dozen shale plays, using vast supplies of water and producing hazardous waste? Or buy more oil from abroad, where most governments don’t agonize over development trade-offs? If nothing else, the Keystone XL pipeline illuminates the vast energy infrastructure it takes to sustain this American lifestyle and the choices we have made about that without really thinking.

Keystone XL: Down the Line is available for Kindle and Nook, as well as through the iBookstore.