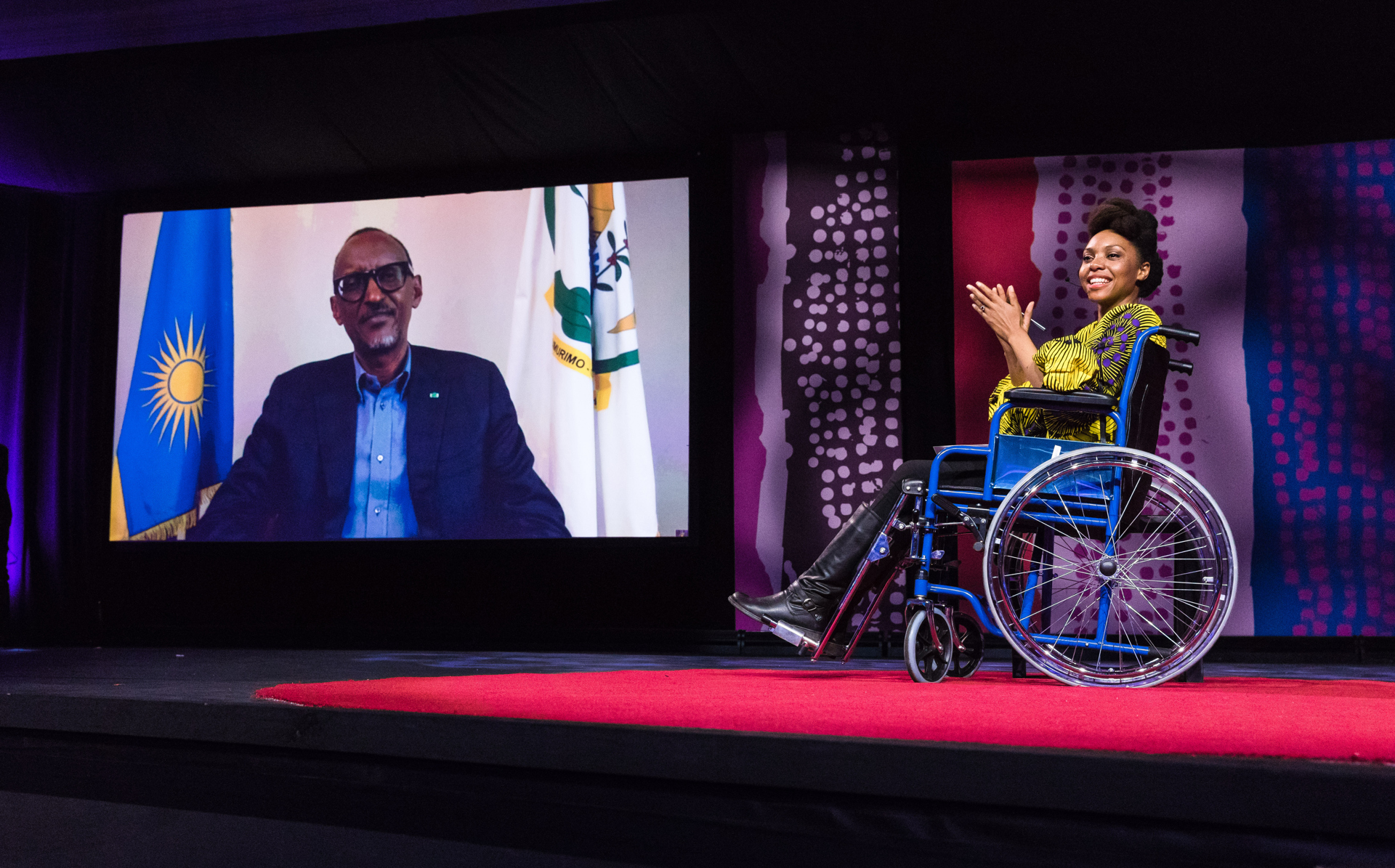 Paul Kagame, President of Rwanda, is interviewed by journalist Vimbayi Kajase via live video link. Her line of questioning started personal and trended toward the strategic. They spoke at TEDGlobal 2017 on Monday, August 28, 2017, in Arusha, Tanzania. Photo: Ryan Lash / TED

If yesterday evening’s talks were about asking what Africa’s future could look like, today’s talks and discussions zoom in on people who have already set out on their own journeys. A president. A chef. A film curator. A businesswoman. A money man. A scientist. A bird lover. They could be the members of a ship’s crew, or a band, depending on what day of week it is. Ladies and gentlemen, I give you the pathmakers.

Rwanda’s president Paul Kagame calls in for a Q&A administered by journalist and media entrepreneur Vimbayi Kajase. Kagame, who recently won a seven-year third term as president, in a poll that was widely considered a formality, is a controversial figure whom watchers can’t quite decide whether to love or hate. Perhaps because it’s hard to place “visionary” and “autocrat” in the same sentence. However, the stories of economic growth, innovation in healthcare delivery, ease of doing business and innovation make his thinking about development on the African continent exceedingly relevant and germane. No one would pass up an opportunity to interview him. In a surprising twist (it’s possible that I am the only one who was surprised), Vimbayi’s line of questioning doesn’t quite start out where you would expect. Instead of going down the obvious roads of politics, economy and governance, Vimbayi begins with a quirky question that would actually not be out of place in a conversation between good old friends who ran into each other on the street: “How is the madam, and how are the kids?”

That said, it’s not trivial that Vimbayi led off the interview with questions about work-life balance — it’s a question that women face all the time, so it was good to hear a man being asked to address this most important topic.

It goes on like that for a while. We learn something of his hobbies and how he spends time with his family. We know that he values honesty in the people he works with. We also know that he’s tired of answering questions about his leadership style and autocracy; he’s been answering them since before he became president, apparently. He started tweeting before Donald Trump. He also had a tip for upcoming journalists: Report accurately and fairly. And he generally does not make campaign promises that he knows he cannot keep. (This statement popped up after Vimbayi asked him to share an example of an idea he’d had that didn’t quite work to plan. The videoconference connection went down for a sec at that point.)

The roundabout approach, from the harmless and personal, working her way down to the strategic and political, seemed strangely effective. Kind of like peeling an onion. Is it possible that we might have learned a lot more about how Kagame’s mind works if Vimbayi had had more time? At one point, she asks him: “What would you say you think with, your head or your heart?” To which he replies, “Both.” “You sound like a head thinker,” she later says.

Vimbayi might not have asked the questions that we secretly hoped she would … but we learned that Paul Kagame is human. Probably. And there’s probably a few African countries that wouldn’t mind exchanging presidents.

Pierre Thiam grew up in Senegal, but through “a combination of accident and cosmic justice” found himself in the US, where he became a successful chef in New York City. But as he tells, it, he began to yearn to make his impact go past the last meal he served. In the 1980s, African cuisine did not exist in New York, the world’s food capital and the place where Pierre had made a name for himself cooking in French, Italian and modern restaurants. He felt called to share it, and then he happened upon on a grain native to Senegal called fonio, an ancient “miracle grain” that is gluten free and nutritious — and that is in danger of disappearing because of climate change, processing difficulty and bad attitudes to local products. Now Pierre is determined to bring fonio to the world; it’s a hardy crop, and industrial-scale cultivation will create jobs and food security. His company has begun to package and distribute fonio through a partnership with Whole Foods (you might know them as the company Amazon just acquired for almost $14 billion). Bonus: In a winning gesture during the talk, Pierre shares freshly made fonio sushi with a few lucky people in the audience. 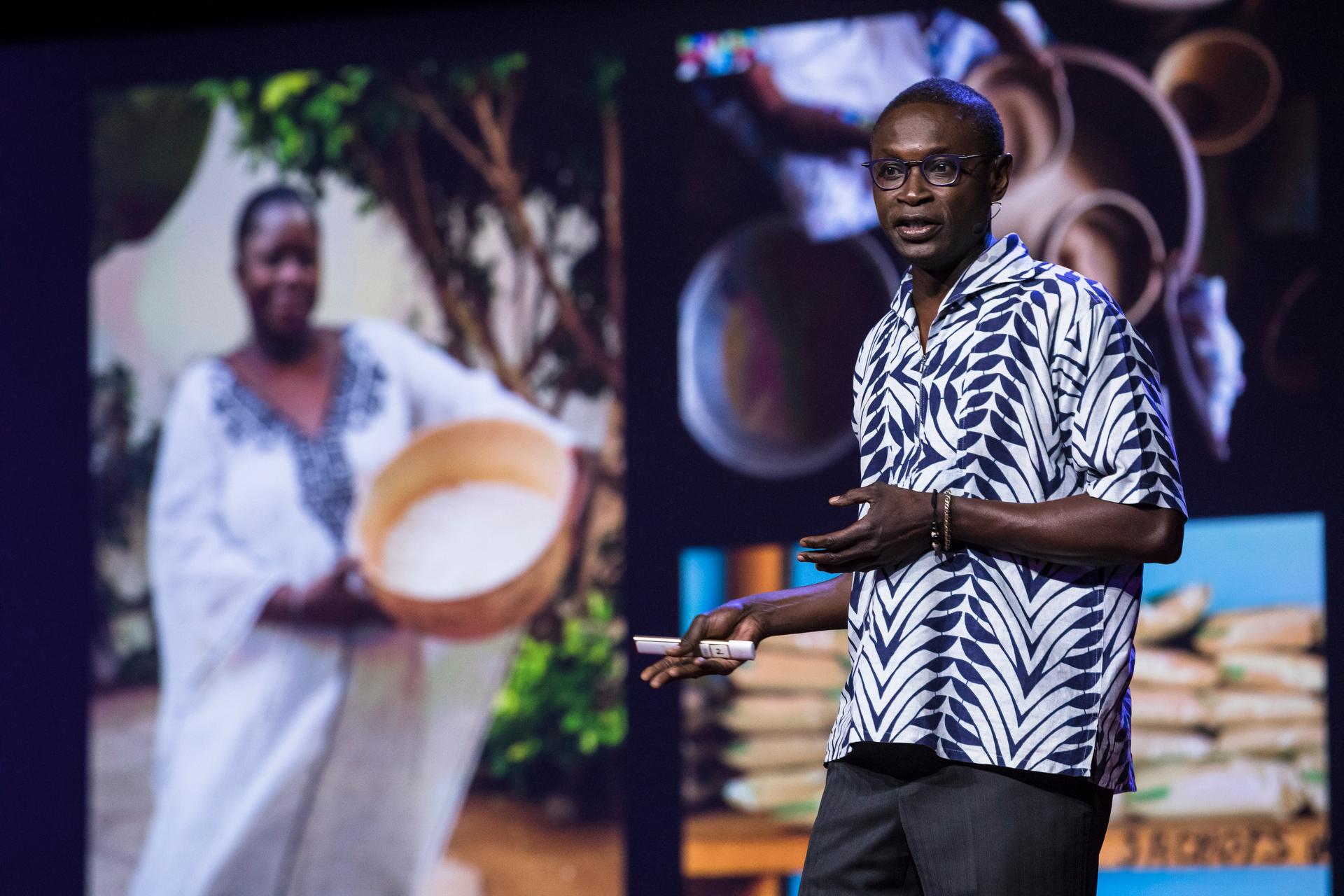 Chef and cookbook author Pierre Thiam hopes to bring a traditional grain, fonio, to markets and plates around the world. He spoke at TEDGlobal 2017 on Monday, August 28, 2017, in Arusha, Tanzania. Photo: Ryan Lash / TED

The first African-directed film Mahen Bonetti saw was Ceddo, a 1977 film by Senegalese director Ousmane Sembene. She had to see it again, an experience she describes as “like dipping your foot in the stream again and this time the temperature was just right.” Bonetti fell in love, and over the last thirty-odd years she’s gone from discoverer to curator and exhibitor of African film and cinema, most notably as the organizer of the annual New York African Film Festival and founding director of the African Film Festival. A work she is recently proud of sharing is Nigerian filmmaker Abba Makama’s Green White Green.

Magatte Wade delivers an impassioned talk about the challenges of doing business in Africa and what led her to start her own ventures, most notably the skin care line Tiossan. She says African countries are poor for a simple reason: It is too hard to do business in them, a statement that the World Bank’s global ease of doing business ranking bears out. She throws the gauntlet down to African governments. If businesses are easier to set up and run, they will create jobs. If governments can do that, entrepreneurs and innovators know what to do. 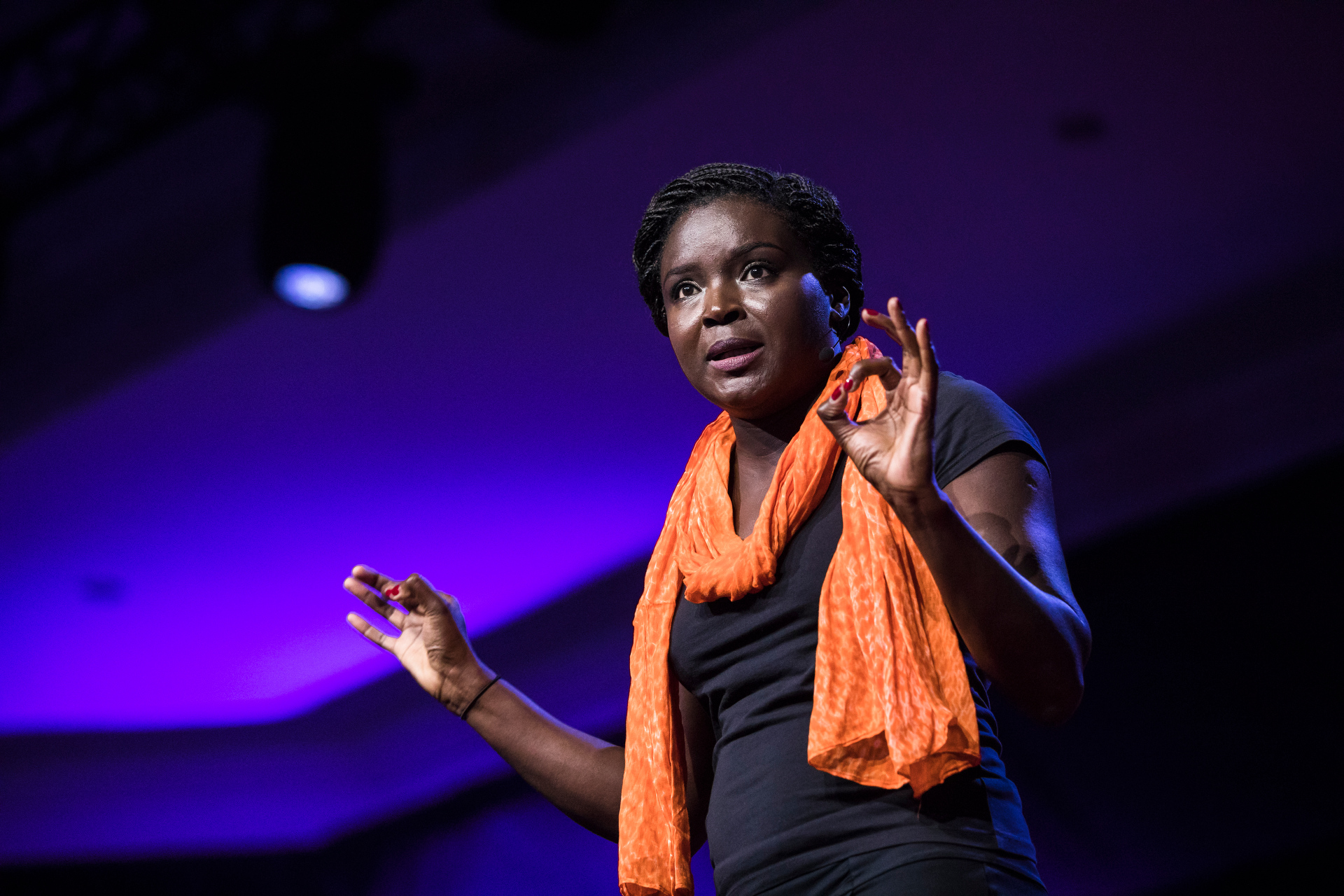 Entrepreneur Magatte Wade calls out governments that make their countries (or allow their countries to become) hard to do business in. Once it’s easier to create a business, she believes, people will, in droves. Photo: Ryan Lash / TED

Llew Claasen is a Bitcoin geek — he is after all the executive director of the Bitcoin Foundation. However, unlike most Bitcoin geeks who can never dumb it down, Llew manages to deliver the ultimate Bitcoin crash course. As he tells it, Bitcoin technology is not only useful as a store of monetary value. It can also be used to denote and transfer ownership of things that aren’t money, like land titles or stock, by creating a reliable and trusted chain of ownership. Llew thinks there is an opportunity for Africa to get in on the ground floor of a technology that is, both in its chronology and its inherent nature, what the internet was in 1995: nascent and full of disruptive potential.

Tania Douglas, a biomedical engineer, reminds us that while technology promises and is capable of much, it could be all for naught if we neglect the context. For instance: Most of the advanced medical equipment used in Africa is imported, but the tools often break down and end up in equipment graveyards because they do not do well in humid and hot environments, and cannot be operated without constant power. As another example: hearing aids don’t mean much if users won’t use them because they fear the stigma attached with hearing loss. Instead of throwing technology at the problem, we may find ourselves innovating better when we step back and look at the problem through the lens of context. A strong example of the context-driven innovation Douglas preaches is Joshua Okello and Aaron Tushabe’s WinSenga, a low-cost and low-power alternative to ultrasound technology that uses a traditional midwives horn paired with a mobile phone to accurately monitor a baby’s heart rate.

Washington Wachira is a wildlife conservationist with a soft spot for birds. And his talk is practically an ode to them. “Birds are amazing!” he declares. “This talk is dedicated to all the birds in the world!” And he invites us to love them like he does by pointing out the similarities between them and us. The males dress to impress. They cuddle and apparently kiss. They are often monogamous, but they have also been known to cheat on their partners; perhaps you can relate. But beyond the cheesy analogues, Washington identifies the crucial role  that birds play in the environment and ecology. Vultures clear out carcasses. Owls kill rodents that eat crops. A good number pollinate flowers. Human activity, encroachment, hunting, poisoning and other manmade hazards are laying waste to their populations. As a group, we must commit to the conservation and survival of the diverse bird species that nature has blessed us with.

And it’s a wrap for day two. If you just got here, don’t leave without checking out the rest of our TEDGlobal coverage, from the opening session yesterday, as well as the two sizzling Fellow sessions earlier today. Namaste! 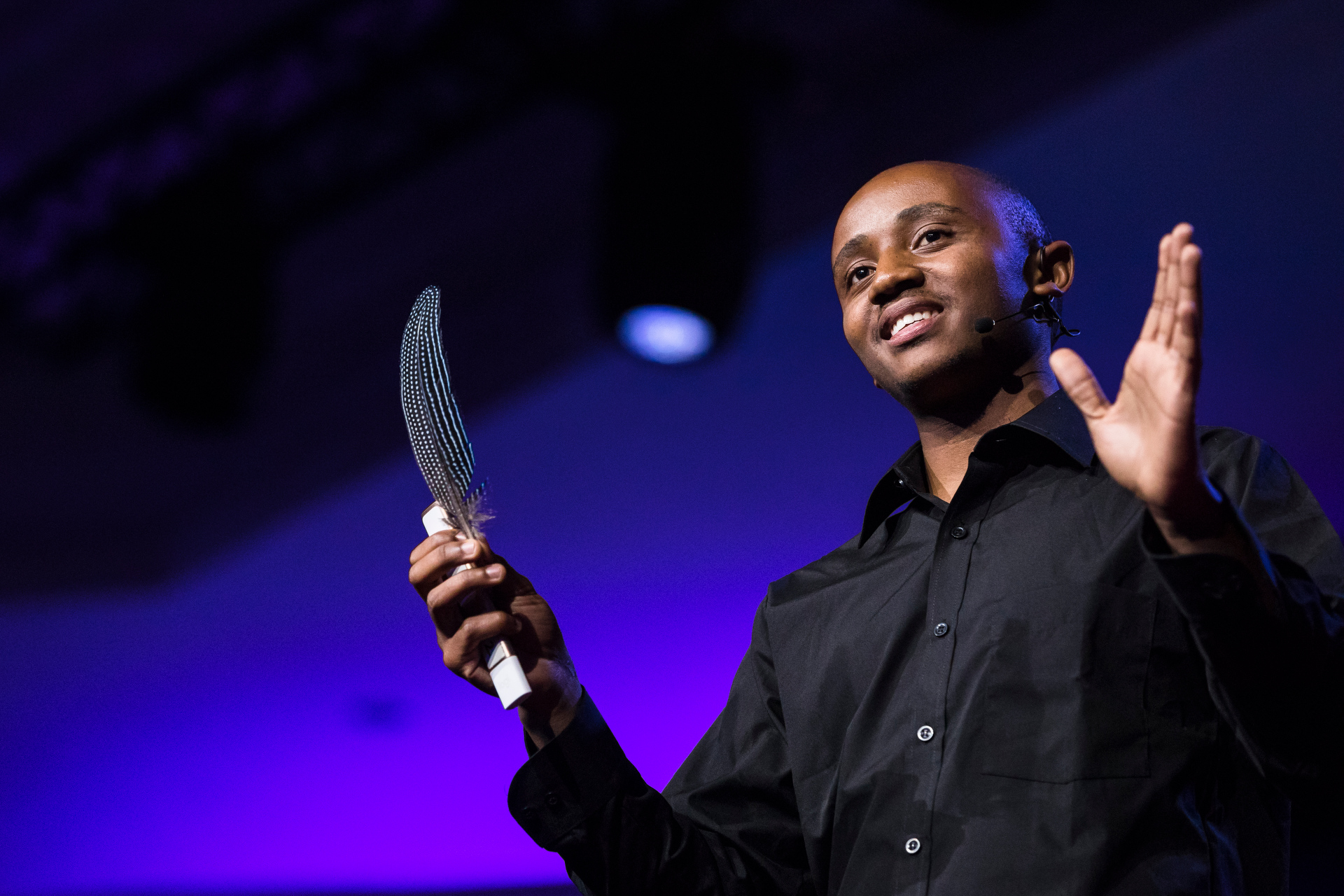