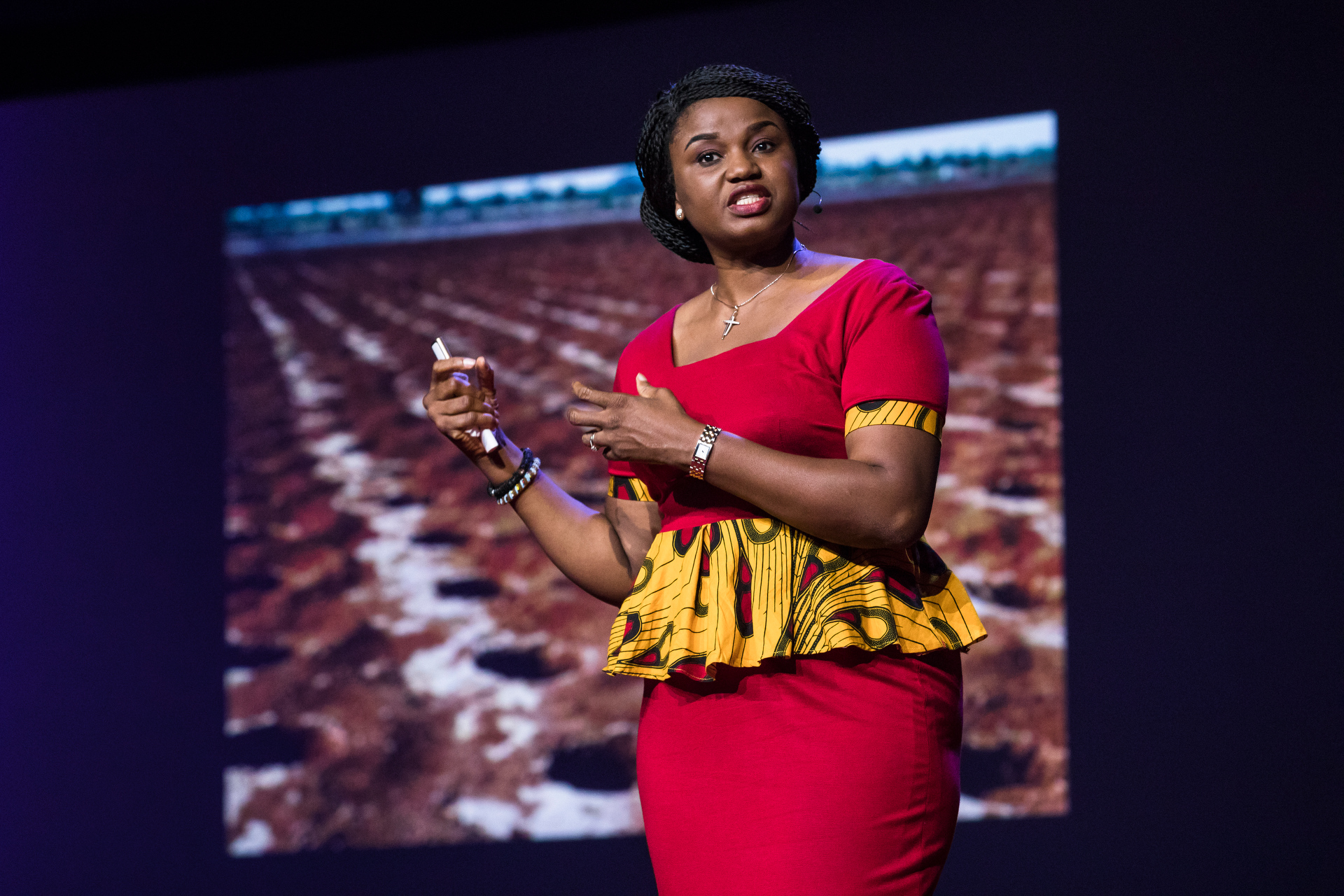 Chika Ezeanya-Esiobu collects ideas from Africa that outperform imported Western ones, such as an irrigation method developed in Niger that beats irrigation tech from the west. She asks: What have we yet to learn from Africa’s own knowledge systems? She speaks at TEDGlobal 2017 on Tuesday, August 29, 2017, in Arusha, Tanzania. Photo: Ryan Lash / TED

There are two things Africa-rising apologists are quick to cite as examples of the continent’s ability to leapfrog past its challenges and end up with solutions that are far ahead of the rest of the world: mobile phones and mobile money. But the frequency with which these two are wielded have also rendered them well-worn. Is Africa’s ability to leapfrog entirely down to these tired tropes, or does the continent have more opportunities, ones we have yet to see, to skip over established methods and create an improved, secure future?

The Leapfrog session of TEDGlobal 2017 features an exciting lineup of innovators we are counting on to give us hope.

Chika Ezeanya-Esiobu believes that there are immense stores of African cultural, medical and scientific knowledge that are untapped, in danger of being forgotten if we let their custodians die without passing them to successive generations. This is happening because, at some point, Africa’s authentic knowledge pathways gave way to education that served the interests of colonial masters. “Our education in Africa does not foster a sense of curiosity about our own environment,” she says. “Our education prepares us to be recipients of pre-packaged knowledge, designed to address someone else’s challenges.” She cites research and anecdotes that bear her out, pointing to Niger’s Tassa, an indigenous irrigation practice that’s been shown to be far more effective than western irrigation methods. In Rwanda, it would have been impossible to try alleged genocide perpetrators in regular courts — there were over a hundred thousand accused. Gacaca, a traditional justice system, was adopted to try alleged genocide perpetrators, largely to the satisfaction of the accused and the victims, because of the Gacaca system’s focus on reconciliation, communal healing and rehabilitation.

Today, Chika has committed to “exploring Africa’s own knowledge systems and finding ways to mainstream same in curriculum, research agenda and policy action across sectors.” It reminds one of a Yoruba saying about how what we went looking for in Sokoto (a state in Northern Nigeria, and more than 500 kilometres from the South West where the Yoruba tribe lives) can usually be found right inside our sokoto (the Yoruba word for pants).

Amar Inamdar draws our attention to an ongoing energy revolution that is sweeping across East Africa, and the rest of the continent, in a pattern that looks a lot like how mobile telephony made landlines obsolete seemingly overnight. “Enough solar power falls on every rooftop in Africa to power all of the energy needs of its occupants, and more,” he says. “Just like cellphones before them, this technology is wireless and avoids all the expense and hassle of creating a massive grid.” It certainly helps that because of its location and climate, Africa benefits more from solar power than almost any other continent. 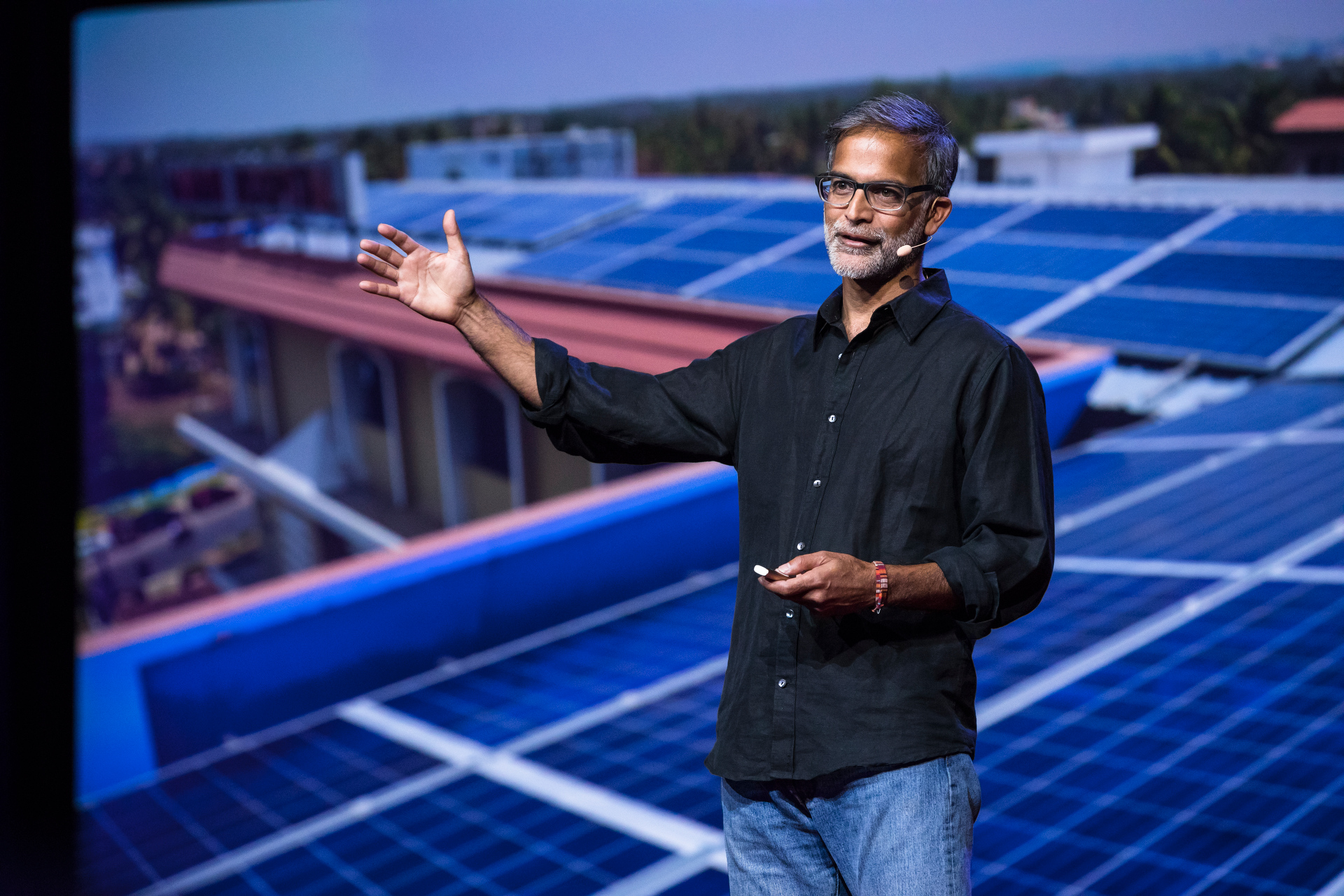 Amar Inamdar loves solar power. As he says: “Off-grid energy has reached a point where it’s a viable alternative to the grid. If we nurture it right, it promises us the opportunity to meet two extraordinary goals: energy access for all and a modern, low-carbon future. We’ll come to know it as the democratization of energy. Every household a proud producer of power for all.” Photo: Ryan Lash / TED

Can Africa industrialize? While obviously not optional, it is a difficult prospect on a continent where engineers are scarce and equipment is scarcer. Since he moved back to Kenya, Kamau Gachigi has been consumed with empowering creators and makers in Kenya with the platform and tools to test out their ideas without needing to go to China. This drive culminated in his leadership of Gearbox, a makerspace and hardware accelerator that provides a rapid prototyping environment for professionals — which includes people with no formal engineering background. Gachigi comes to the stage armed with the stories of people Gearbox has enabled to test their ideas and gain the confidence to take them to the next level. 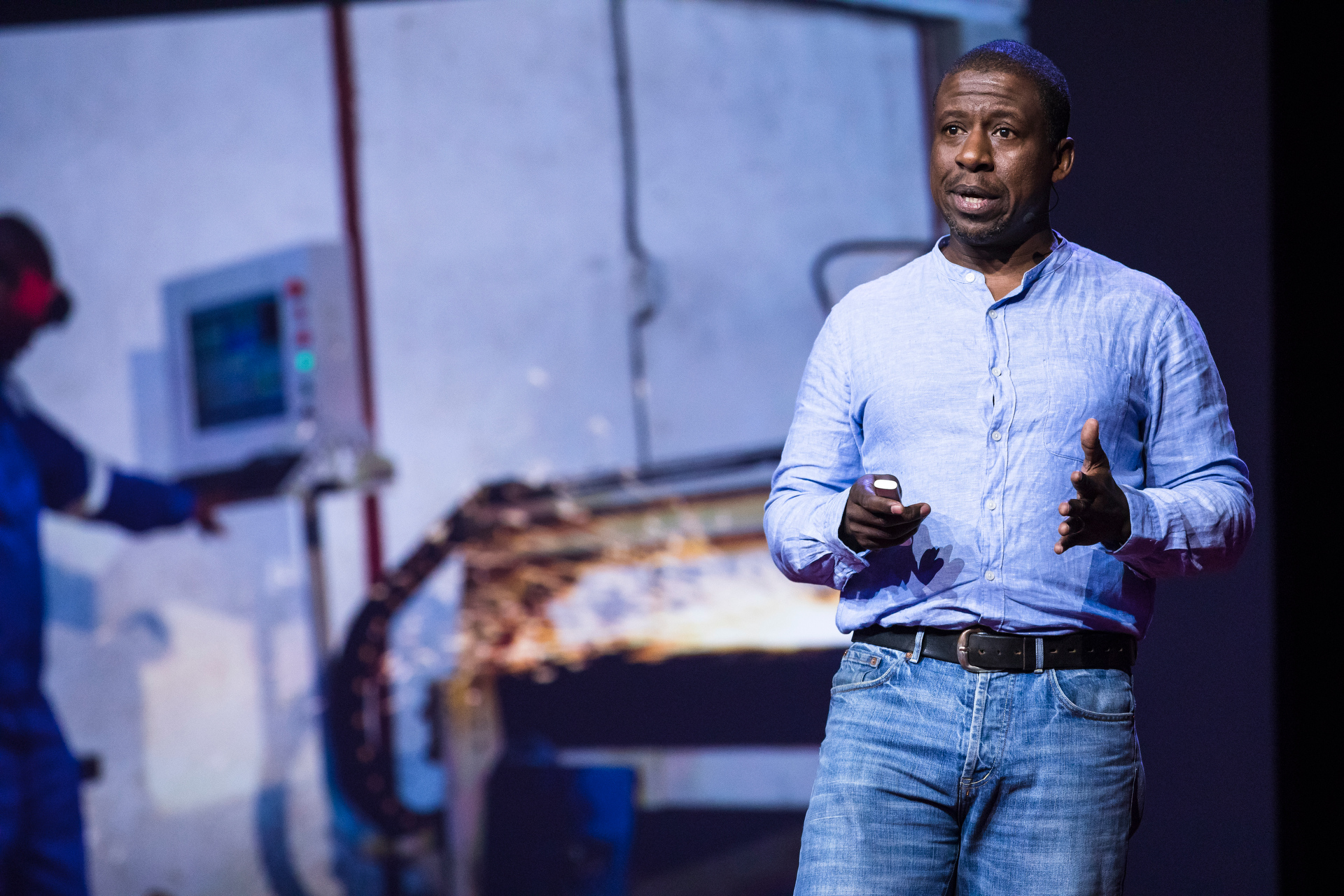 Kamau Gachigi runs Gearbox, a makerspace in Nairobi that’s focused on inventors and creators who need the room and tools to make prototypes and start businesses — and that has empowered some big successes.. Photo: Ryan Lash / TED

Joel Jackson is also all about hardware. In his case, it’s making cars that are tough enough to withstand harsh African roads, while staying within the economic reach of the people who need them the most. Transport is the literal lifeblood of any economy, and Africa’s is constricted in many places. Jackson’s motor company, Mobius Motors, based in Nairobi, Kenya, is taking pre-orders now for the Mobius II, a handsome SUV with a custom-built suspension and a strongly built space-frame for handling bumpy terrain and carrying heavy loads.

Sara Menker quit a lucrative career in commodities trading to figure out how the global value chain of agriculture works. Her discoveries have led to some startling Malthusian predictions. Her exact words: “A tipping point in global food and agriculture could occur if surging demand for food surpasses our agricultural systems’ structural capacity. At that point, supply can no longer keep up with demand, despite exploding food prices. People may starve. Governments may fall.” And said tipping point could occur in as soon as a decade. For those who like numbers, by 2027, there could be a 214 trillion calorie deficit (or 379 billion Big Macs).

What is to be done? Sara’s talk wasn’t entirely Malthusian catastrophe. At the end, she delivers a believable path forward. The answers lie in Africa, China and India, she says. “We need to start working towards reform and the commercialization of agricultural industries in Africa and India”. 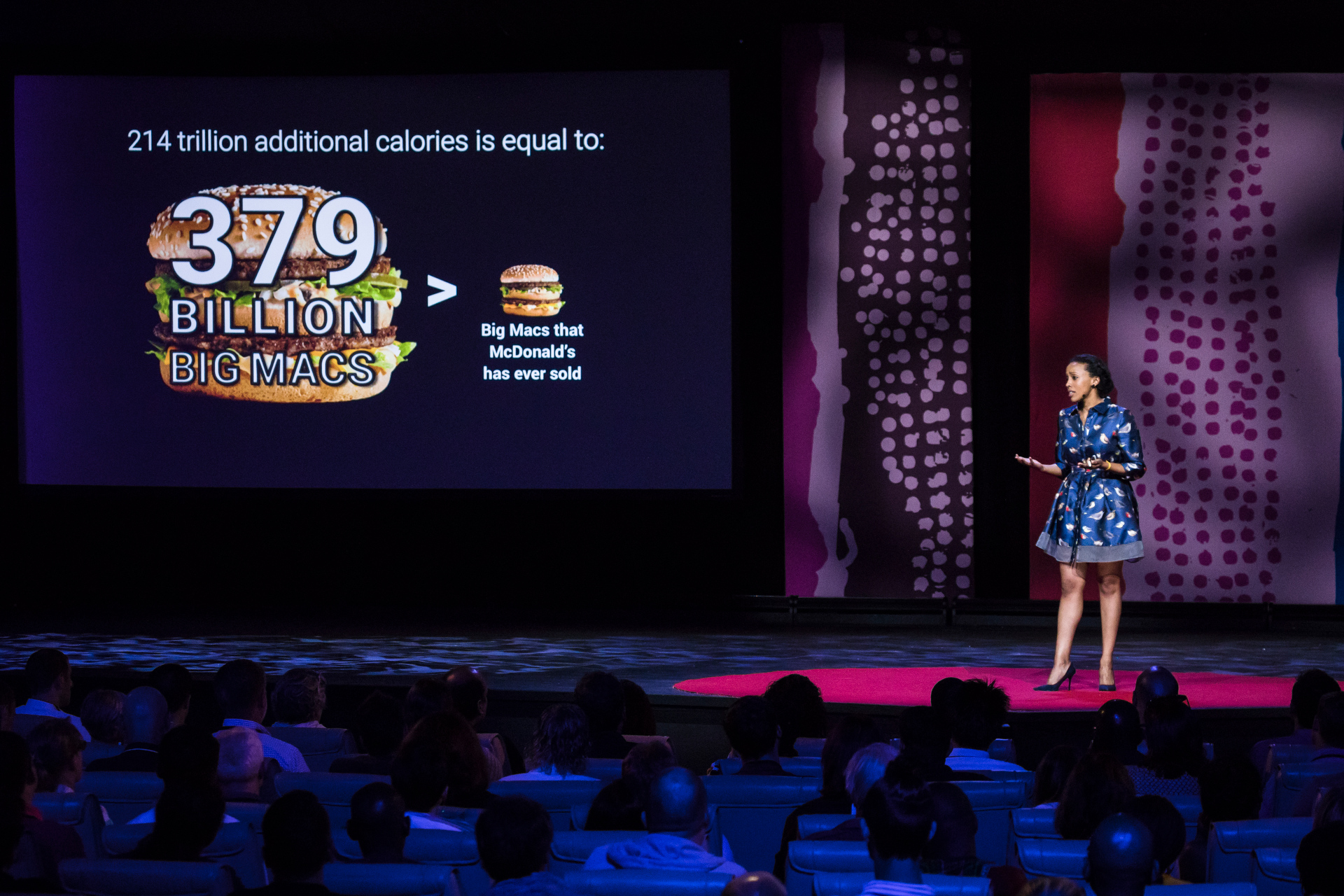 Does this photo make you hungry? It should actually make you a bit nervous: this giant hamburger, says Sara Menker, represents the 214-trillion-calorie deficit we can expect globally within a decade unless we rethink our agriculture system. Photo: Bret Hartman / TED

As ecommerce startups have found, getting things from point A to B in Africa is a massive challenge. You could buy tougher vehicles. You could build better and longer roads. Or you could use drones. Keller Rinaudo’s startup, Zipline, uses drones to ship blood from a centralised supply bank to any location, no matter how remote, usually within 30 minutes. According to Rinaudo, Paul Kagame and the Rwandan ministry of health made a big bet in 2016 when they signed a commercial contract with his company. As of the middle of 2017, the system has not only improved Rwanda’s healthcare system but has also given the country an aerial logistics network. As a bonus, Rinaudo says, it has upskilled a crew of operators who run the world’s only automated delivery system operating at national scale, as well as inspiring the next generation of engineers. (Last week, Rinaudo announced Zipline was starting up in Tanzania as well.)  “Most people think tech will benefit rich countries first, and then trickle down to the developing world,” Rinaudo says. “But the opposite may happen. Today, small countries are out-innovating developed economies.”

And that, my friends, is how you leapfrog. Don’t miss the highlights from previous TEDGlobal 2017 sessions, they are all here. On to the next one! 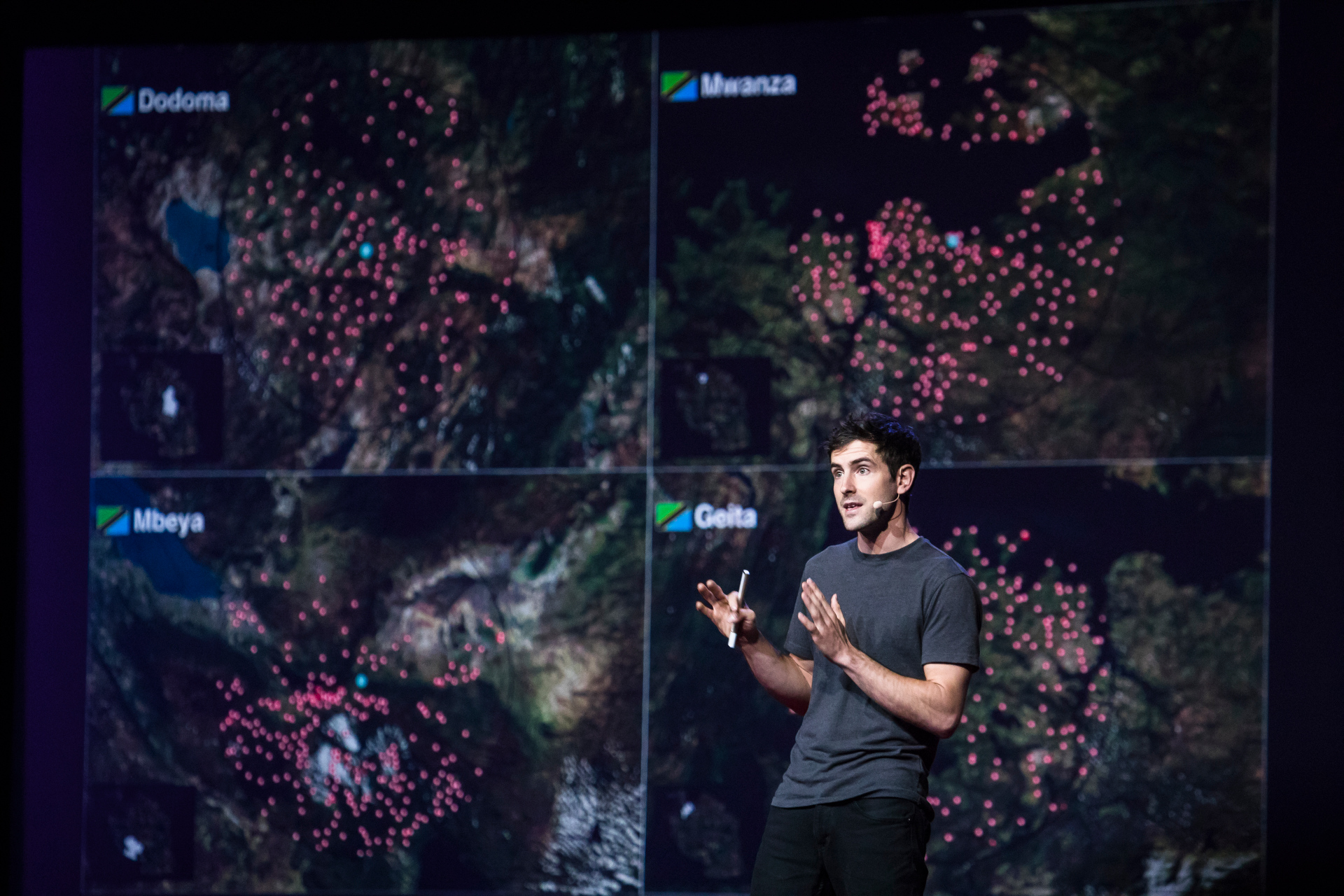 Engineer Keller Rinaudo has worked with the nation of Rwanda to set up a supply network that brings blood and medical supplies to remote clinics, rapidly, via drone. Photo: Bret Hartman / TED