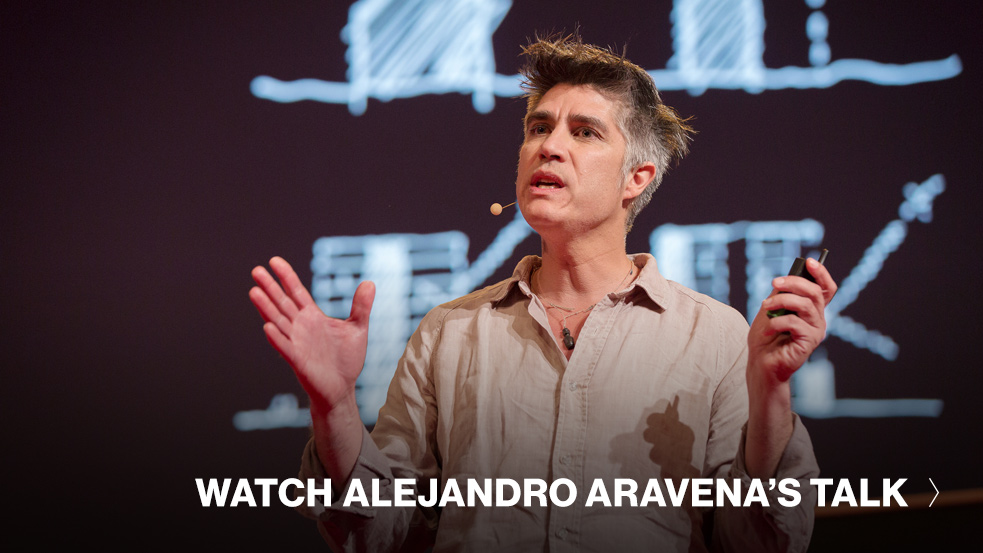 121 years of celebrating art. Originally an art exhibition, the Venice Biennale is a tradition stretching back to 1895 and has expanded over the years to include events for music, theater, film, dance and architecture. Opening on May 28, the 15th International Architecture Exhibition is curated by Alejandro Aravena, winner of the 2016 Pritzker Prize. Under the theme “Reporting from the Front”, the exhibition will explore architecture’s importance beyond aesthetics and prestige, presenting its ability to address urgent human needs, a theme that is no surprise given Aravena’s career eschewing high-profile projects for those solving social problems. You can also find Vik Muniz’s arts-oriented school, built in one of Rio’s favelas and featuring artwork by fellow TED speaker JR, and Kevin Slavin’s art installation based on his research mapping the microbiomes of cities using bees. (Watch Alejandro, Vik, JR, and Kevin’s TED Talks)

Mental health and the global agenda. China and India are two of the world’s most populous countries, and both are in the throes of seismic demographic and epidemiologic shifts. Something else they have in common: less than 10 percent of people receive mental health care. A new series of studies, including Vikram Patel’s paper in The Lancet, explores the state of their mental health systems, and The New York Times draws on this latest research to highlight the international effort to put mental health at the center of the global health agenda. This effort could also involve collaboration with non-Western medical practices, including acupuncture, yoga and Ayurvedic medicine. (Watch Vikram’s TED Talk)

Trompe l’oeil. The Louvre Pyramid is an iconic Paris landmark, but to viewers between May 25 and June 27, it will seem to have disappeared. The Louvre invited street artist and TED Prize winner JR to cover the Pyramid in one of his photographic collages. It took several days and a crew of six to install the exhibition, which entailed pasting images of the buildings behind each side of the pyramid onto each glass side, so that the pyramid, viewed from the correct angles, would appear to vanish. The installation explores what the museum would look like without the pyramid, which was widely criticized upon construction but has become one of Paris’ most photographed landmarks. (Watch JR’s TED Talk)

And so the Pyramid disappear … @museelouvre #Paris (until 28th of June) –

An inside look at Uber surge pricing.
It’s late, raining, and you just want to catch an Uber home, but a dreaded notification pops up that prices are surging, the bane of Uber users everywhere. On NPR’s Hidden Brain podcast, Keith Chen, now the head of Uber’s Economic Research, enlightens listeners on the inner workings of surge pricing. Expect to learn things like why you may be more likely to take an Uber at 2.1x than 2.0x surge pricing, and why a rainy day may mean fewer taxis and more Ubers on the road. (Watch Keith’s TED Talk)

A prize for wooden architecture. Michael Green has won Canada’s Governor General’s Medal in Architecture for 2016. The award, one of 12 given this year, recognizes Green’s firm Wood Innovation and Design Centre and their innovative and sustainable forms of wood production. In Green’s TED Talk, he pointed out what makes building with wood so unique, “Just like snowflakes, no two pieces of wood can ever be the same anywhere on Earth. I like to think that wood gives Mother Nature fingerprints in our buildings. It’s Mother Nature’s fingerprints that make our buildings connect us to nature in the built environment.” (Watch Michael’s TED Talk)

A humanitarian response to climate change. On May 20, Secretary General Ban Ki-Moon announced that Mary Robinson and Macharia Kamau have been appointed Special Envoys on El Niño and Climate. The appointment comes on the heels of severe drought and flooding in regions of Africa, Central America and the Pacific caused by El Niño, and looming threats of severe weather events caused by climate change — and both will hit poor communities the hardest. As Special Envoy, Robinson will be able to continue her quest for climate justice. (Watch Mary’s TED Talk)

A web of crime in Rio’s favelas. In The New York Times Book Review, Edward Dolnick reviews Misha Glenny’s Nemesis: One Man and the Battle for Rio, a true account of how an ordinary man became the king of Rio de Janeiro’s biggest slum and leader of a notorious drug cartel. Peeling back the layers of corruption and violence, Glenny chronicles a complex, twisting world with journalistic precision and care. “He is at his best in a quieter voice, sorting out why the police cannot simply swoop into a favela and arrest Mr. Big, and how street lookouts work and, especially, how a smart young Brazilian with a sick baby could transform himself into a crime lord,” Dolnick reflects. (Watch Misha’s TED Talk)