In the summer of 2014, one of the world’s top nature photographers was on an expedition in the far north to document the changing Arctic. Paul Nicklen was sailing around Svalbard, an archipelago halfway between Scandinavia and the North Pole. The largely uninhabited land sees 24 hours of sunlight in the summer and 24 hours of darkness in the winter, and is closer to the top of the planet than most people ever get.

While on this journey, members of Nicklen’s crew had been searching for polar bears, without success. Eventually, Nicklen did spy some in the distance, unmoving. When he approached them, he discovered they were dead. “They had cubs who had starved to death — 3-year-old cubs, big cubs,” he recalls.

They couldn’t linger. “All of a sudden a blizzard came up, a massive storm — 80 knots of wind — so we had to go and hide,” Nicklen recalls. For protection, the best choice was to sail behind Nordaustlandet, a large, ice-covered island in the Svalbard archipelago. “And the temperature, even though we’re 600 miles from the North Pole, was 62 degrees Fahrenheit. And you’ve got all the waterfalls pouring off the Nordaustlandet ice cap.”

Nicklen snapped a photo — and, on this balmy day in the Arctic, captured a potent picture of climate change: A wall of ice in a steel-colored sea, with water pouring from the top of it.

“You go from the dead bears to this, and then look at the science — you come to understand that if we wait for the streets of New York or Miami to be flooded from rising sea levels, then we’ll be 200 years too late,” he says.

The image was used by National Geographic and Nature Conservancy magazine; Al Gore frequently uses it in his talks on climate change. “While I sleep, that image is up there working on behalf of our planet, and that’s exciting to me,” Nicklen says.

This Saturday — Earth Day 2017 — the image will have another venue: Nicklen’s new art gallery in New York’s fancy SoHo neighborhood, where the walls of a sunny room on West Broadway will display some of his recent work. Large prints will show up-close encounters with ghostly Kermode (“spirit”) bears, penguins parading along glaciers, seals swimming beneath icy waters — and disintegrating ice caps, like the one in Svalbard.

That image was captured three years ago, and Earth’s poles, where Nicklen spends a good deal of his time, have only gotten warmer. The Arctic and Antarctica are warming at twice the rate of the rest of the planet — and the last couple of years have seen record-breaking high temperatures at both poles.

They’ll be the first place where species — and entire ecosystems — disappear, and Nicklen may be one of the last humans to witness them before they go. He is known for braving extremes to document inaccessible and inhospitable environments, and disseminating his photos far and wide. His two most common venues are the pages — digital and print — of National Geographic, and an Instagram account with 3.1 million followers. A TED talk he gave in 2011 showcasing his work has been viewed nearly 2 million times. His gallery will add one more venue.

The complete joy of being immersed in the world of dozens of feisty steller sea lion pups who mob, chew, play, blow bubbles and provide a constant source of entertainment. It is not everyday that I get to feel like a giant chew toy. @cristinamittermeier @sea_legacy and I just had the incredible team here from @Reddigitalcinema for a few days of diving and the sea lions provided all of the entertainment. Thanks for hanging out and being awesome @snapamap @clyde_be @its_drea_day and @derekrushton_ #shotonred #nauticam #8K #nature #naturelovers #instagood

“My goal, really, is to break down the walls of apathy with this show, to have people start to care,” Nicklen says, sitting in the gallery on a recent warm April afternoon — one of the first pleasant days of a cold spring that followed a warm winter. Nicklen and his partner, Cristina Mittermeier (who, by the way, is also a researcher turned prolific nature photographer), were working quickly to get the space ready for this Saturday’s public opening. Three photographs were already on the walls, with many more to come. Workers moved about the room, and a large Burmese mountain dog named Bernie paced cheerfully back and forth. Mittermeier says she hopes people attending New York’s March for Science will make their way downtown to the gallery’s opening.

“This is another form of storytelling,” Nicklen says. “As a photographer, there’s nothing more beautiful than seeing your work really big. To be able to transport an audience into the scene. You want people to feel what you feel.”

Nicklen grew up in an Inuit community on Canada’s Baffin Island. He loved the Arctic environment, and initially decided to become a wildlife biologist for the Canadian government. Repeatedly, however, Nicklen saw the data he collected have little impact on policy makers who controlled the future of the ecosystems he worked in. “To come out with data sets, and to be completely ineffective, was such a slap in the face,” he remembers. He turned instead to photography. “That took another seven years, of being a starving photographer, just out there trying,” he says. His hard work paid off: For more than a decade and a half now, Nicklen’s pictures of our changing Arctic ecosystems have reached a global audience.

In the years since the expedition to Svalbard, Nicklen has continued to travel frequently — and to see the effects of three very hot years on Earth, each breaking the previous year’s record. He just returned from Antarctica, where some parts of the continent experienced their hottest summer ever. (Temperatures reached the 60s at one research station.) 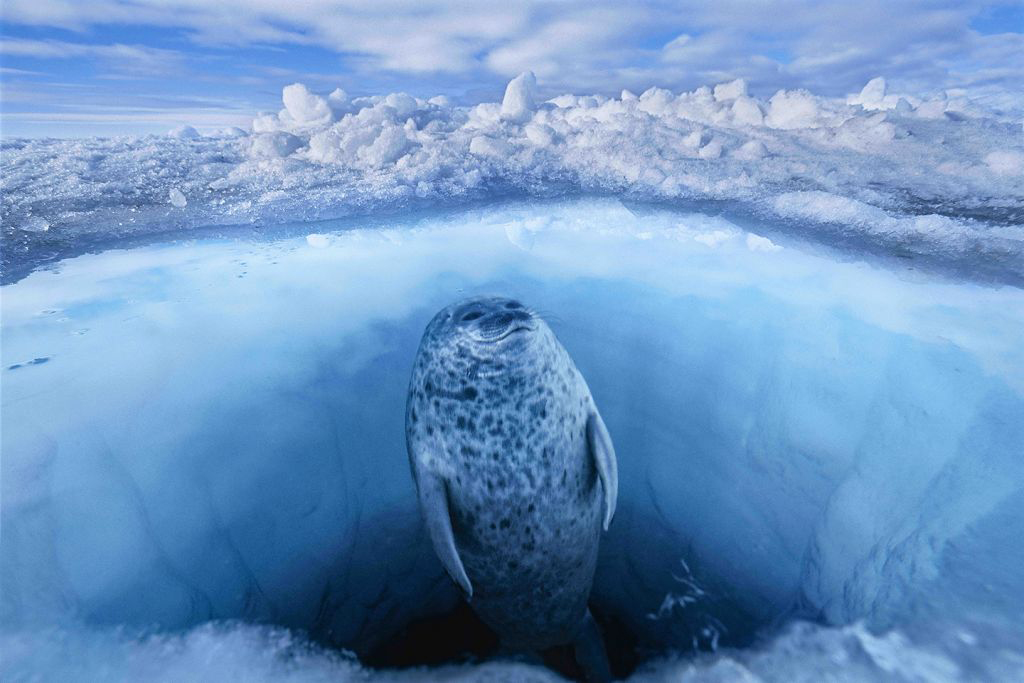 Antarctica is normally a frozen desert, but it rained the whole time Nicklen was there. “When it’s that warm and you get that much humidity and that much precipitation, it actually wipes out penguin populations,” he explains. “Their chicks are in that fluffy downy phase, and when they get wet, they freeze. You start to see a lot of dead penguins.” He’s observed other unnatural phenomena during other recent travels: Inuit fisherman whipping out their iPhones to photograph fish they’ve never seen before — new migrants borne north by warming waters.

Last March, as Nicklen and Mittermeier were in the Arctic traveling by dogsled on assignment for National Geographic, the ice split open beneath their sled. “One of the dogs drowned,” Mittermeier recalls. “Imagine the sled, with all of our gear, all of our cameras, pulling down on these poor dogs — it was just so dramatic.”

Experiences like these can be overwhelming reminders of the potency of climate change. “We are going to lose a lot of species. The silver lining for me, I guess, is that — it’ll be sad, but ultimately I can see us disappearing as a species if we keep on this path. The Earth will recover. But how many species are we going to take with us?”

I have had a lifelong obsession with ice. My good buddy and fellow photographer @jedweingarten was able to get this shot of me while I was lost in the moment; studying the endless shapes, patterns and light during our foray deep inside a glacier in Alaska. #ice #love #beauty #picoftheday #gratitude

But it’s not yet time to despair. Nicklen is starting to see signs of a shift. “Ten years ago I’d say the word ‘climate change’ in a lecture and people would kind of roll their eyes,” Nicklen says. People are starting to listen — but not fast enough. “The problem with humans is we sort of deny, deny, deny, panic,” he continues. “And right now we’re in the denial phase.”

Millennials are the exception. They’re already panicking — and that gives Nicklen hope. “Now, if I get any opposition, I’ll have 200 millennials rise to the occasion and take on the opposer. They get it, they’re smart, they’re not in denial. They’re willing to be inconvenienced. To see true change, we have to be uncomfortable.“

To help get the message out, Nicklen and Mittermeier have brought together some of their colleagues — other world-renowned photographers, filmmakers and storytellers — under the banner of a group they founded called SeaLegacy. The group’s mission is to spread the word about disappearing animals, environments, and the vulnerable seaside human communities that rely on them. “We’re like Jacques Cousteau 2.0,” Nicklen says. A portion of the gallery’s proceeds will go to support SeaLegacy.

But Nicklen’s plans have a high price tag — an estimated $8 million a year. The gallery, he hopes, will help cover some of those costs. “It’s another way to feed the beast to keep us out there working,” he says.

Come one, come all. Please join me at my new gallery in SoHo, New York this Saturday. This polar bear and I will be there to greet you. Saturday (April 22nd-Earth Day) at 347 West Broadway, SoHo, NYC #gratitude #conservationphotography #gallery #fineartwithpurpose