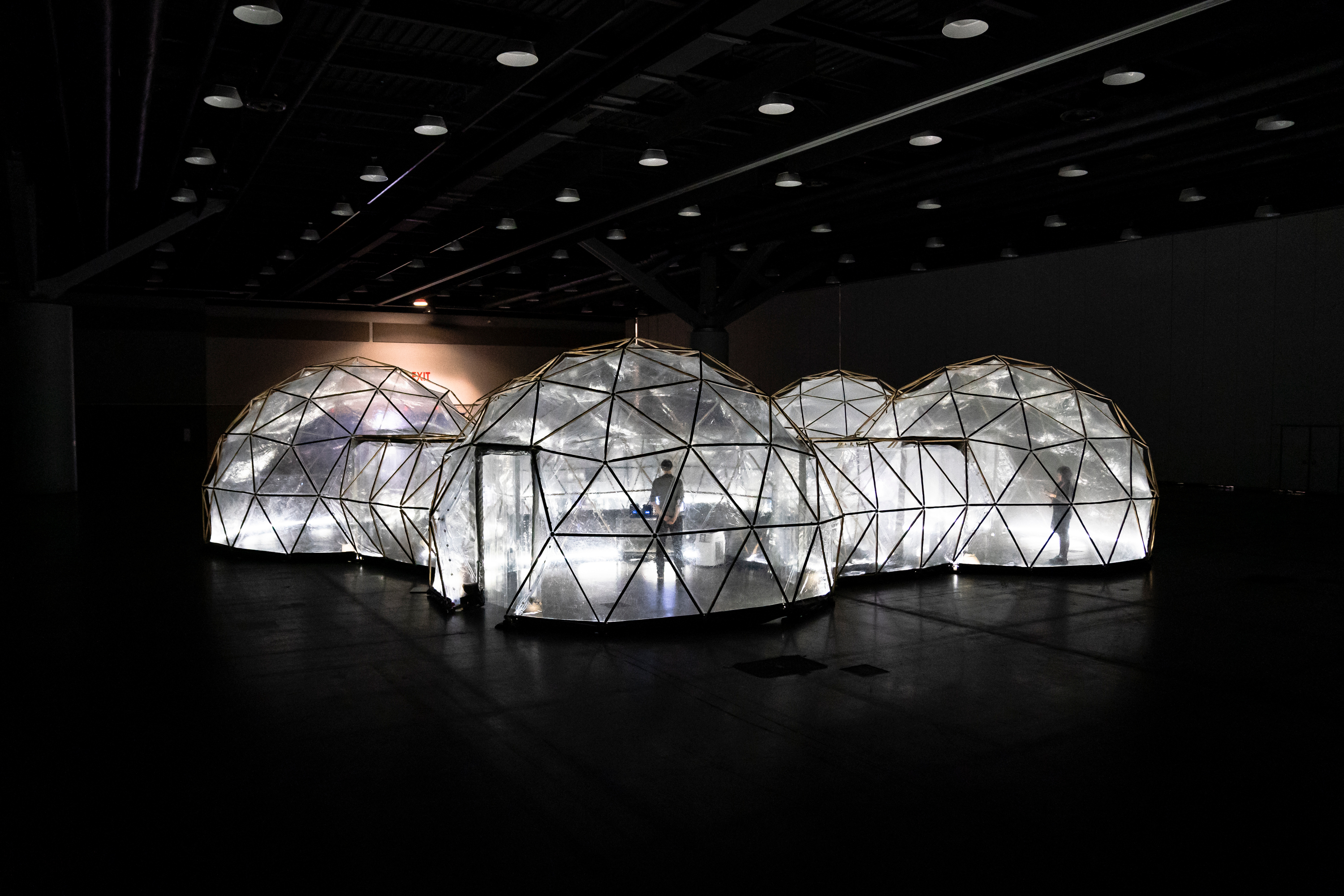 The eerie first impression of the Pollution Pods, a monumental installation at TED2019 that explores the qualities of air. Photo: Marla Aufmuth / TED

You’ve walked into a cavernous, darkened concrete space. There, centered on the floor, looking a bit like an alien lander, is a glowing plastic multi-domed structure filled with swirling mist and light. Your first instinct, because you’re human, is to find a way inside.

Pass through a plastic curtain into the first of five geodesic domes, where you’re greeted by the artist who created it, Michael Pinsky, and a whiff of cool, crisp air with a hint of — is that tar?

What you’re experiencing is a simulation of the air in Tautra, Norway, on a winter day. As you expect, it’s clear and quite Norwegian. The hint of tar? It’s from the friction of tires on the roads; because the air is so clean, you can smell this faint effect. The scents have been created with help from International Flavors & Fragrances, while a filter from Airlabs is scrubbing the air at scale. The air quality index (AQI) — an international measurement index, used by collaborator Plume Labs — is in the single digits here in the Tautra dome (lower numbers are better).

Pass through a plastic curtain, walk through a plastic tunnel, pass through another curtain, and you’re in a misty, gray simulation of London on a February day, with an AQI rating of about 60–65. “There’s more pollution when it’s colder than warmer,” says Pinsky, who lives in London himself. “Hot air pushes the band of pollution up; cold air brings it down to street level.” This murky mist has a strong smell of diesel, which, Pinsky says, has been getting worse in London as drivers switch to diesel to hit 2020 targets for carbon dioxide emissions. “There’s little industry in London; if you got rid of combustion engines, that would end the pollution problem,” he says. “During the Anti-Brexit March, pollution fell to about 6.” 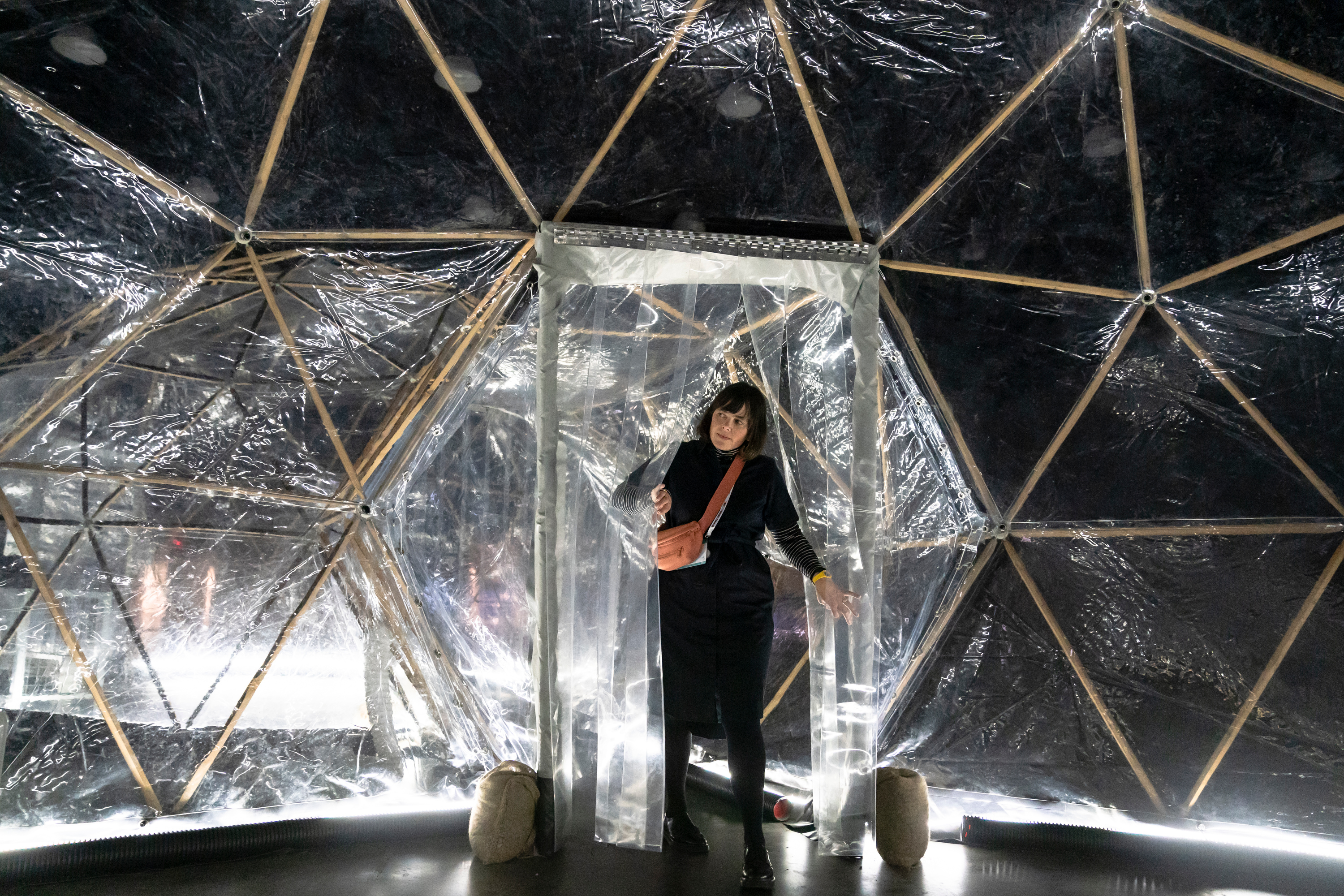 You gratefully leave this cold mist only to stumble into the warm, smoky stew of New Delhi. “It’s basically the worst,” says Pinsky. “You’re smelling diesel, large particulates from the unsealed roads, and smoke from burning plastic. As well, you get smoke from crop burning nearby. Delhi has it all.”

Dome 4 is Beijing in November. What are we smelling in this chilly haze? “Coal and wood for domestic heating — most apartments don’t have central heating.” On the flip side, there’s less diesel in the air than there once was, says Pinsky. “China is slowly getting around to dealing with diesel.”

We end up in dome 5, which smells … unusual. This dome represents São Paulo, where the main transport fuel is ethanol, “a vinegary, fruity smell,” says Pinsky. On top of that, the city has high levels of ozone, which, you may be concerned to learn, “burns the fat off your nostril hairs that help you smell properly.” The air smells clean enough, but “if you were here for 20 minutes, you’d start to feel it,” says Pinsky.

Leaving each dome and entering the next feels like taking your first step into the open air after leaving the airport, when the smoke and smell of a new city hits you full force. The overall effect of the five-dome trip, Pinsky suggests, is a dégustation, a tasting menu of air quality from around the world, each with its own distinct character.

As you leave the domes, you’re presented with a second menu, of six things you can do to care for the planet — to help more of our cities be like Tautra and less like New Delhi. You may consider becoming a weekday vegetarian, buying fewer clothes and mending what you have, switching to an electric vehicle, eating locally grown food, becoming a master recycler, or committing to become a climate evangelist. After your tour of the planet’s air, it feels more important than ever to take a few steps toward a cleaner world. 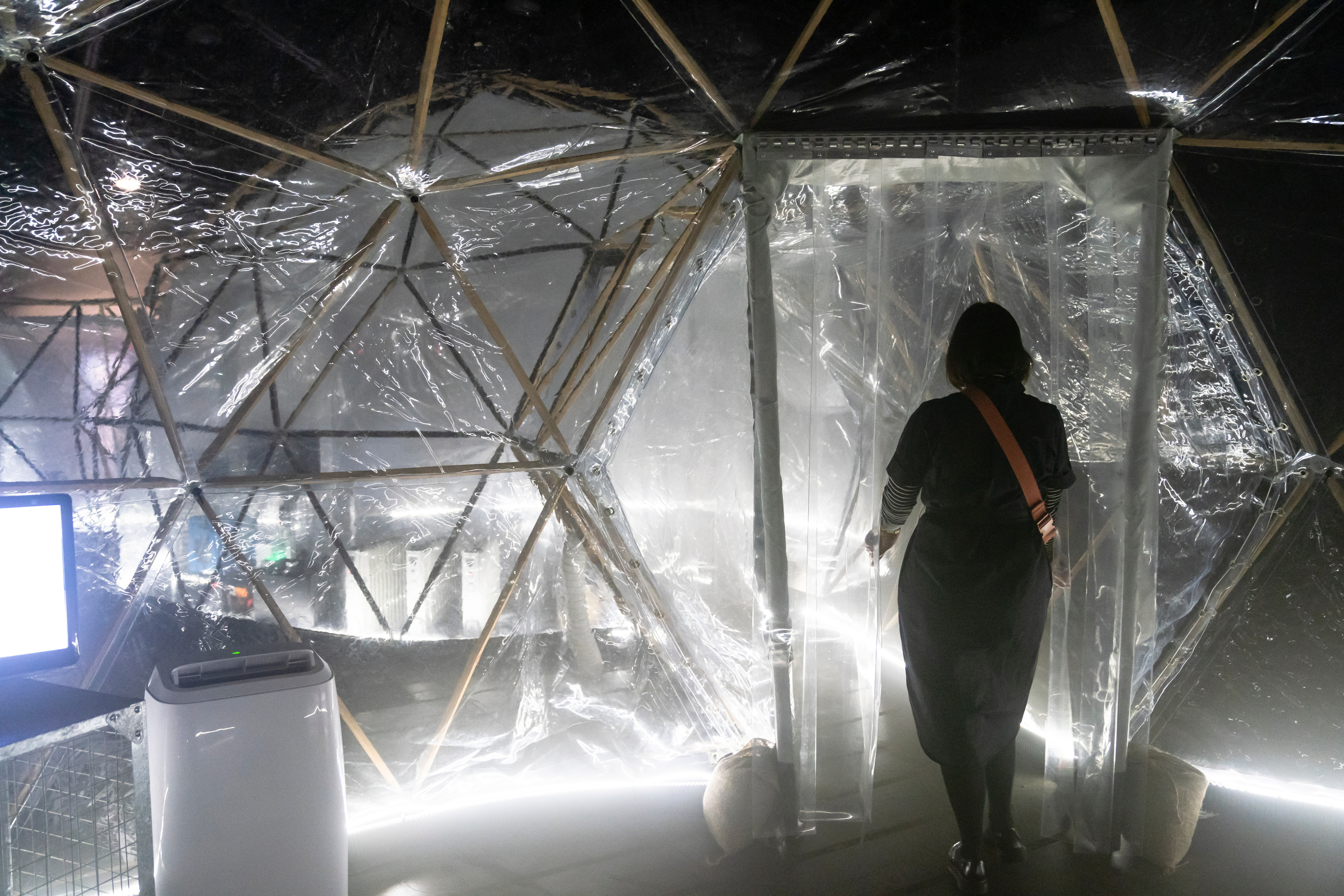