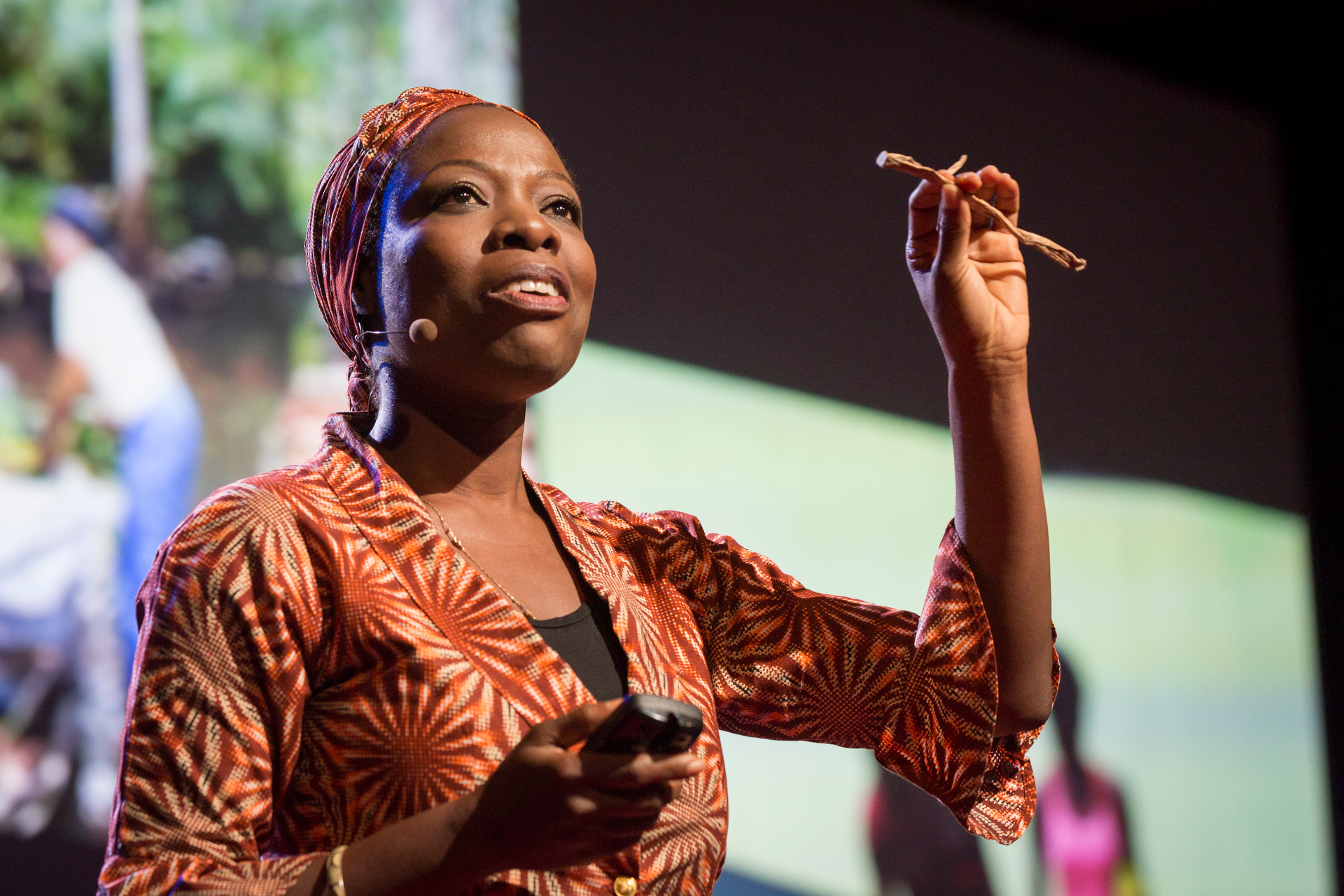 Achenyo Idachaba opens the TEDWomen 2015 conference, sharing what inspired her to turn an aquatic weed that shuts down trade into a material for handicrafts. Photo: Marla Aufmuth/TED

Before there can be momentum, you need a spark to set it off. In the first session of TEDWomen, we hear from speakers with crackling ideas — from re-imagining an irksome weed as something useful, to helping technology sense and react to our emotions.

Short recaps of these talks…

A weed, transformed. The water hyacinth looks like a beautiful flower. But as Achenyo Idachaba says, it is actually an invasive aquatic weed that clogs the waterways in Nigeria, stopping trade, interrupting schooling, disrupting everyday life. She wondered: How could the water hyacinth become something useful? “I love handicrafts, especially handicrafts woven around a story,” she says of her aha moment. She researched how to harvest water hyacinth, dry it, and weave it. She started at the traditional weaving village of Ibadan, where, she says, “I literally took my dried weeds and went pounding on doors, asking for anybody who knew how to weave.” The result: MitiMeth, a company that transforms water hyacinth into accessories and home decor, like keychains, woven boxes and textured lamps. “Looking at water hyacinth now, I see something valuable, aesthetic, durable — something beautiful,” she says.

Robots to the rescue. Each year, disasters leave over a million people dead and 2.5 million people disabled and displaced. But, says Robin Murphy, if we can reduce our initial response efforts by just one day, we can reduce overall recovery time by 1,000 days. Her solution: disaster robots. Surrounded on stage by a “petting zoo” of small air-, ground- and sea-based robots, Murphy shows how these robots can go where humans can’t. Consider the iSENSYS unmanned aerial vehicle, or UAV, used in Hurricane Katrina to help structural engineers see damage from angles they couldn’t access with binoculars on the ground. Or the fixed-wing hawk UAV used in the Washington State Oso mudslides, which conducted geospatial surveys from the air on the still-moving mud, letting responders know where it was safe to go by pulling together images for 3D reconstruction. In seven hours the robots retrieved data that normally would have taken days to gather. As Murphy says: “In the next disaster, look for the robots.”

Technology with EQ. When computer scientist Rana el Kaliouby was working on her PhD at Cambridge, far from her family back in Egypt, she felt that her emotions were being lost in cyberspace. This experience set her toward building Affectiva, an emotion-reading technology that can detect even the subtlest changes in facial expressions. In an onstage demo, el Kaliouby shows exactly how it works, and reveals some fascinating data she and her team have learned from capturing from 12 billion emotion data points from 2.9 million face videos (so far). She also shared some exciting applications she’s looking forward to — like emotion-enabled glasses, that could help visually impaired people read facial expressions. Read much more in a full recap of this talk » 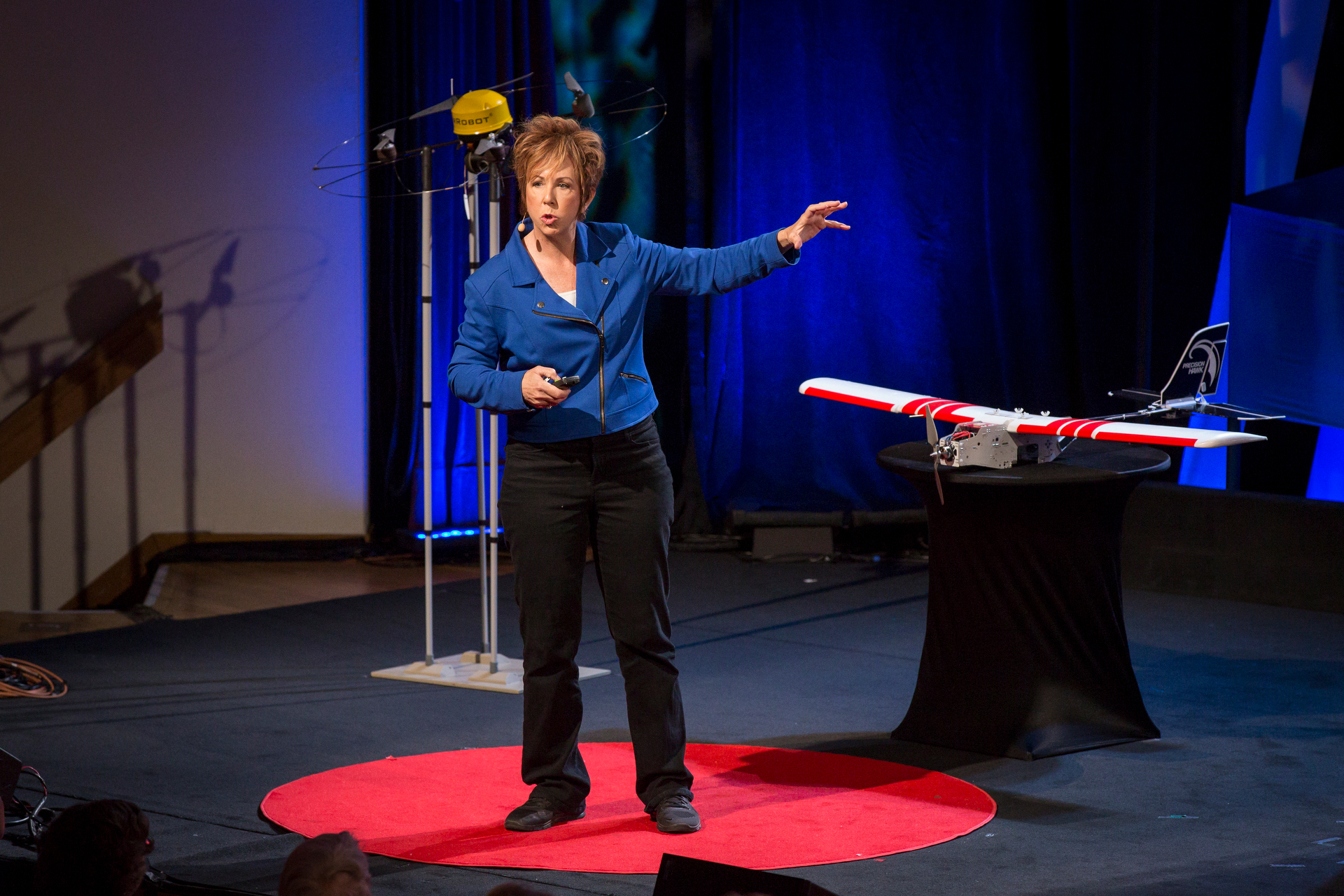 When jewelry gets smart. The average person checks her phone more than 100 times a day, says Christina Mercando. “I started to think about ways I could have the most relevant information sent to me without it being distracting,” she says. “There are a lot of amazing wearable products on the market today … but they look a lot like gadgets. Very few are targeting women or focusing on the fashion aspect of wearable technology. You can’t just turn something pink and think women are going to want to wear it.” With that, Mercando introduces us to Ringly, a ring that changes color and vibrates in different patterns to let you know when an important person is reaching out, when you have a meeting coming up and more. She walks us through the design process, sharing the work involved in making the ring’s 50 components small enough to fit in a nice piece of jewelry. Bonus: The ring box is the charger.

From an economics classroom to the stage. One day in college, Linda Briceño‘s economics professor pulled her aside and whispered to her, “What are you doing here?” This catapulted the start of her jazz career, she says. She then sits down at a keyboard and begins to play soothing chords while singing, “Life — it can be as soft as a whisper, or as fast as the speed of light.” Her soulful and resonant voice connects with the audience, as she switches into flowing Spanish verses. Then, adding in a drum track from her computer, she reaches for her trumpet and belts out an energetic jazz rhythm as the crowd claps and grooves.

Virtual-reality news. Nonny de la Peña, known as the godmother of virtual reality, delivers a powerful talk to close Session 1 of TEDWomen. De la Peña creates moving journalistic VR pieces that allow people to directly experience a news event. “My whole life as a journalist, I’ve been compelled to make stories that make people care,” she says. “But it wasn’t until I got involved with virtual reality that I started to see intense, authentic reactions from people that really blew my mind.” VR, says De la Peña, helps you “remember with your entire body and not just with your mind.” She shows footage from four different pieces, including one called Project Syria. The viewer is placed in the streets of Aleppo. The face of a young girl singing fills the screen, and suddenly a bomb goes off, throwing the scene into chaos. “It’s an incredibly scary, unreal feeling,” says De la Peña, “And I’ve had people involved with real bombings say it evokes the same kind of fear.” She announces a new VR piece being launched today: A story called Kiya, created with Al Jazeera America, to address issues of domestic violence by intimate partners. This work, says De la Peña, is unique because it “puts you in the middle of something you would normally see on TV news.” 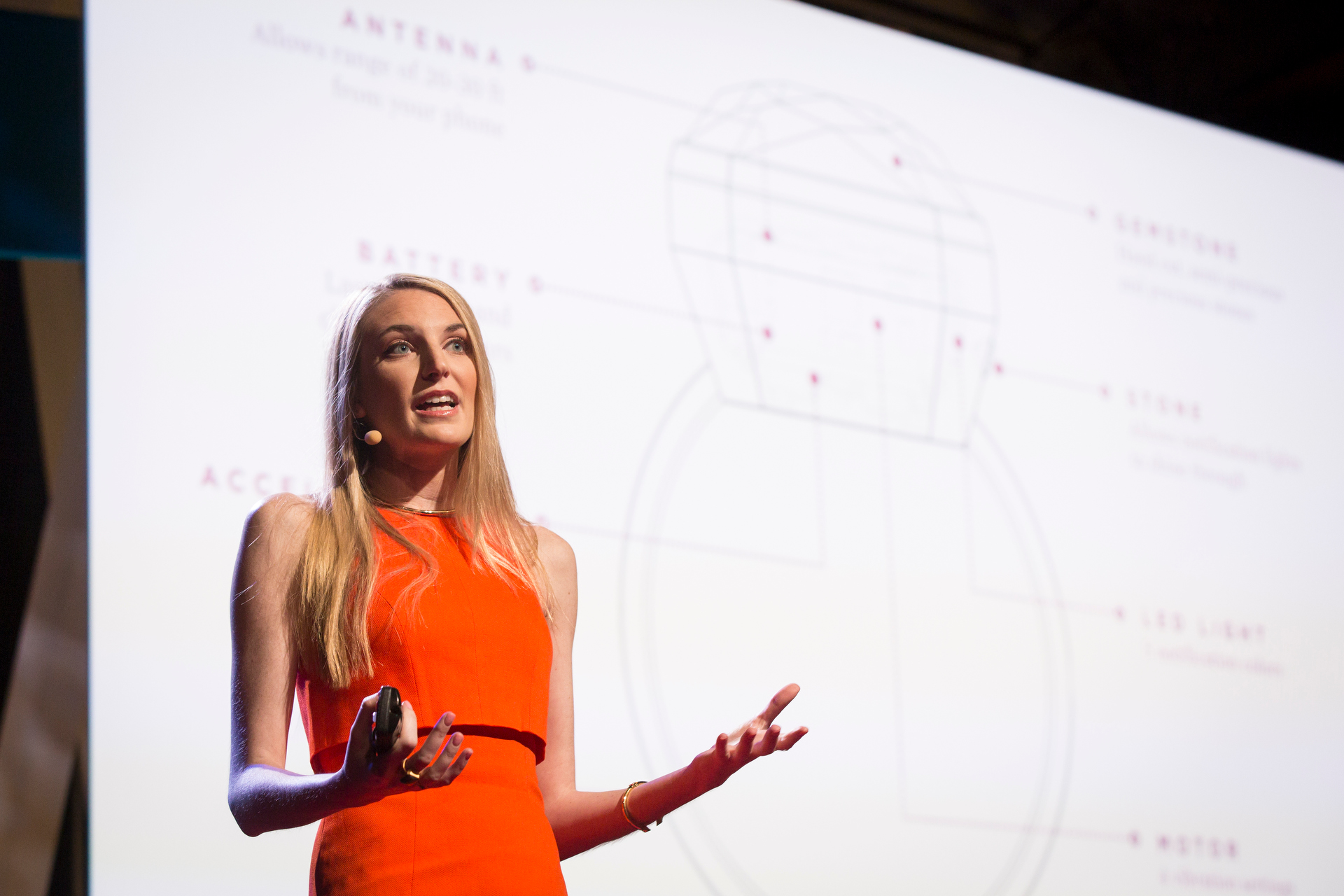 Christina Mercando has a new spin on wearable tech — a ring that actually looks like jewelry. Photo: Marla Aufmuth/TED