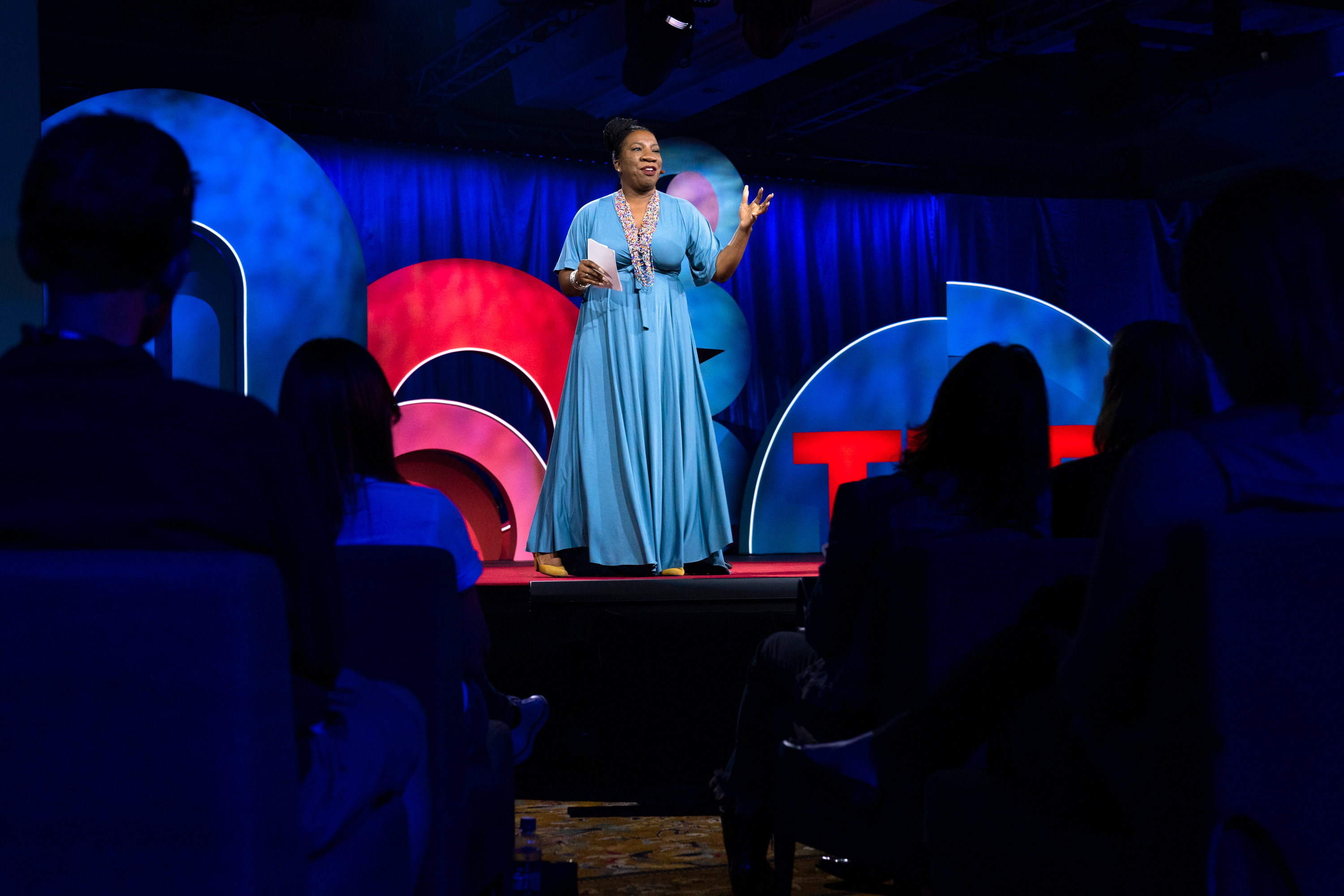 “Trauma halts possibility; movement activates it.” The founder of the Me Too movement, Tarana Burke, is the first speaker at TEDWomen 2018: Showing Up, on November 28, 2018, in Palm Springs, California. (Photo: Marla Aufmuth / TED)

In 2006, Tarana Burke was consumed by a desire to do something about the rampant sexual violence she saw in her community. She took out a piece of paper, wrote “Me Too” across the top and laid out an action plan for a movement centered on the power of empathy between survivors — a movement that could open up the possibility of healing.

Over the next decade, the Me Too movement steadily helped survivors of sexual violence, particularly Black women and girls, find pathways to healing. In 2017, the movement gained a hashtag and sparked a global conversation on social media among survivors and supporters.

Yet as Burke takes the stage at TEDWomen 2018, she admits a hard truth: “I am numb.”

For Burke, numbness is not an absence of feeling — it’s an accumulation of feelings. It’s the memories that creep up in the middle of the night that can’t be fought off, the sense of the magnitude of the task ahead. And she recognizes that this feeling has spread. “For survivors, we often have to hold the truth of our experience,” she says. “But now we are all holding something, whether we want to or not.”

What might we all be holding on to? Burke reflects on the Kavanaugh hearings, the criticism of survivors that’s come out of the White House — and a media backlash that has framed the Me Too movement as a witch hunt, out to destroy due process or start a gender war. “Suddenly, a movement to center survivors of sexual violence is being talked about as a vindictive plot against men,” Burke says. At times, the movement she sees portrayed in the media is almost unrecognizable to the one she started over a decade ago.

So Burke wants to be clear about what the Me Too movement is. “This is a movement about the one in four girls and the one in six boys who are sexually abused every year, and who carry those wounds into adulthood,” she says. It’s about the far-reaching power of empathy and the millions of people who raised their hands a year ago to say “me too” — and still have their hands raised.

Amid the upheaval of this historical moment, it’s understandable that many of us have been left numb, she says. “This accumulation of feelings that so many of us are feeling together across the globe is collective trauma,” Burke says. But it is also the first step toward building the world we need right now. “This is bigger than a moment,” she says. “We are in a movement.”

In Burke’s eyes, the most powerful movements have always been about a bigger shared vision of what’s possible, not just the acknowledgment of what is now. Recalling Dr. King’s famous quoting of Theodore Parker — “The arc of the moral universe is long but it bends toward justice” — Burke reminds us that someone has to bend it.

“My vision for the Me Too movement is part of a collective vision to see a world free of sexual violence,” she says. “I believe we can build that world. Full stop.”

How can we reach this world? We start by dismantling the building blocks of sexual violence: power and privilege. This starts by shifting our culture away from a focus on individual bad actors or depraved, isolated behavior. Instead, we must recognize that any person sitting in a position of power comes with privilege, rendering those without power vulnerable — whether it’s a boss and employee, coach and athlete, landlord and tenant or another similar dynamic. “We reshape that imbalance [of power] by raising our voices against it in unison, by creating spaces that speak truth to power,” she says. “We have to re-educate ourselves and our children to understand that power and privilege doesn’t always have to destroy and take — it can be used to serve and build,” she says.

At the same time, Burke reminds us that the work of the Me Too movement is to teach survivors it’s OK not to lean in to the trauma. Rather being forced to replay their experiences in public for others’ awareness, Burke says, survivors should be given space to find and create joy in their lives.

Looking back on the origin of the Me Too movement in 2006, Burke returns to the notion of possibility. “I have been propelled by possibility for most of my life,” she says. “Possibility is a gift. It births new worlds and it births vision … Those who came before didn’t win every fight. But it did not kill their vision, it fueled it.”

For that reason, Burke refuses to give up — and asks that we do the same. “We owe future generations nothing less than a world free of sexual violence,” she says. “I believe we can build that world. Do you?”