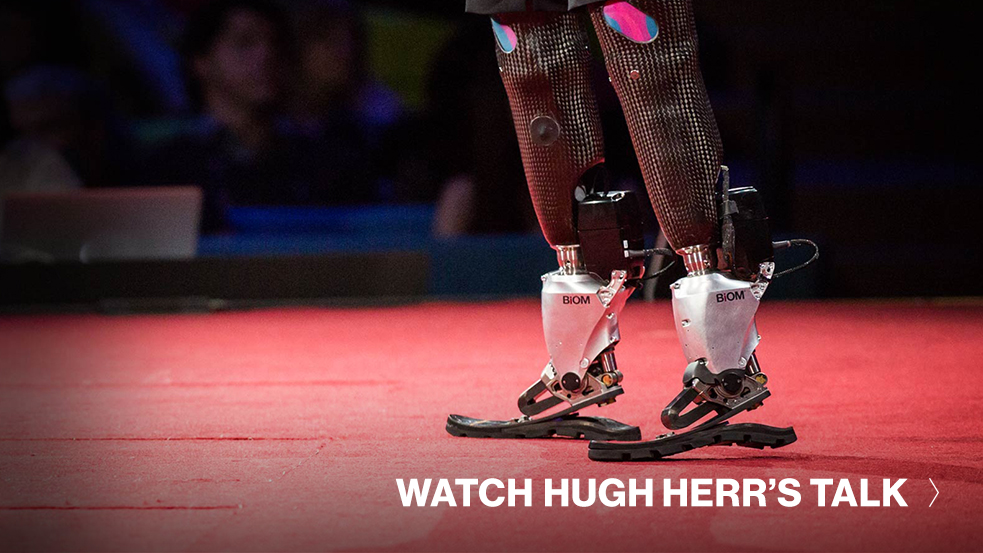 Prosthetics that feel more natural. A study in Science Robotics lays out a surgical technique developed by Shriya Srinivasan, Hugh Herr and others that may help prosthetics feel more like natural limbs. During an amputation, the muscle pairs that allow our brains to sense how much force is applied to a limb and where it is in space are severed, halting sensory feedback to and from the brain and affecting one’s ability to balance, handle objects and move. But nerves that send signals to the amputated limb remain intact in many amputees. Using rats, the scientists connected these nerves with muscles grafted from other parts of the body — a technique that successfully restored the muscle pair relationship and sensory feedback being sent to the brain. Combined with other research on translating nerve signals into instructions for moving the prosthetic limb, the technique could help amputees regain the ability to sense where the prosthetic is in space and the forces applied to it. They plan to begin implementing this technique in human amputees. (Watch Herr’s TED Talk)

From mathematician to politician. Emmanuel Macron wants France to be at the forefront of science, and science to be incorporated in global politics, but this is easier said than done. The election of Cédric Villani to the French National Assembly—a mathematician, Fields medalist, and TED speaker—provides a reason for optimism. “Currently, scientific knowledge within French political circles is close to zero,” Villani said in an interview with Science. “It’s important that some scientific expertise is present in the National Assembly.” Villani’s election is a step in that direction. (Watch Villani’s TED Talk)

A digital upgrade for the US government. The United States Digital Services, of which Matt Cutts is acting administrator, released its July Report to Congress. Since 2014, the USDS has worked with Silicon Valley engineers and experienced government employees to streamline federal websites and online services. Currently, the USDS is working with seven federal agencies, including the Department of Defense, the Department of Health and Human Services and the Department of Education. Ultimately, the USDS’ digital intervention is not just about reducing cost and increasing efficiency– it’s about restoring people’s trust in government. (Watch Cutts’ TED Talk)

Can mushrooms help save bees? Bee populations have been in decline for the past decade, and the consequences could be dire. But in a video for Biographic, produced by Louie Schwartzberg and including mycologist Paul Stamets, scientists discuss an unexpected solution: mushrooms. The spores and extract from Metarhizium anisopliae, a common species of mushroom, are toxic to varroa mites, the vampiric parasite which sucks blood from bees and causes colony collapse disorder. However, bees can tolerate low doses free of harm. Metarhizium anisopliae has even been shown to promote beehive longevity. This could be a step forward in curbing the mortality rate of nature’s most prolific pollinator. (Watch Schwartzberg’s TED Talk and Stamets’ TED Talk)

Support for women entrepreneurs. The World Bank Group announced its creation of The Women Entrepreneurs Finance Initiative (We-Fi), a facility that will create a $1 billion fund to support and encourage female entrepreneurship. Initiated by the U.S. and Germany, it quickly received support from other nations including Canada, Japan, Saudi Arabia and South Korea. Nearly 70% of small and medium-sized enterprises owned by women in developing countries are denied or unable to receive adequate financial services. We-Fi aims to overcome these and many other obstacles by providing early support, networking opportunities and access to markets. “Women’s economic empowerment is critical to achieve the inclusive economic growth required to end extreme poverty, which is why it has been such a longstanding priority for us,” World Bank Group President Jim Yong Kim said. “This new facility offers an unprecedented opportunity to harness both the public and private sectors to open new doors of opportunity for women entrepreneurs and women-owned firms in developing countries around the globe.” (Watch Kim’s TED Talk)

Daring to drive. Getting behind the wheel of a car is something many of us take for granted. However, as Manal al-Sharif details in her new memoir, Daring to Drive: A Saudi Woman’s Awakening, it’s not that way for everybody. The daughter of a taxi driver, al-Sharif got an education and landed a good job. The real challenge was simply getting to work—as a rule, Saudi women are not allowed to drive. Daring to Drive tells the story of her activism in the face of adversity. (Watch al-Sharif’s TED Talk)