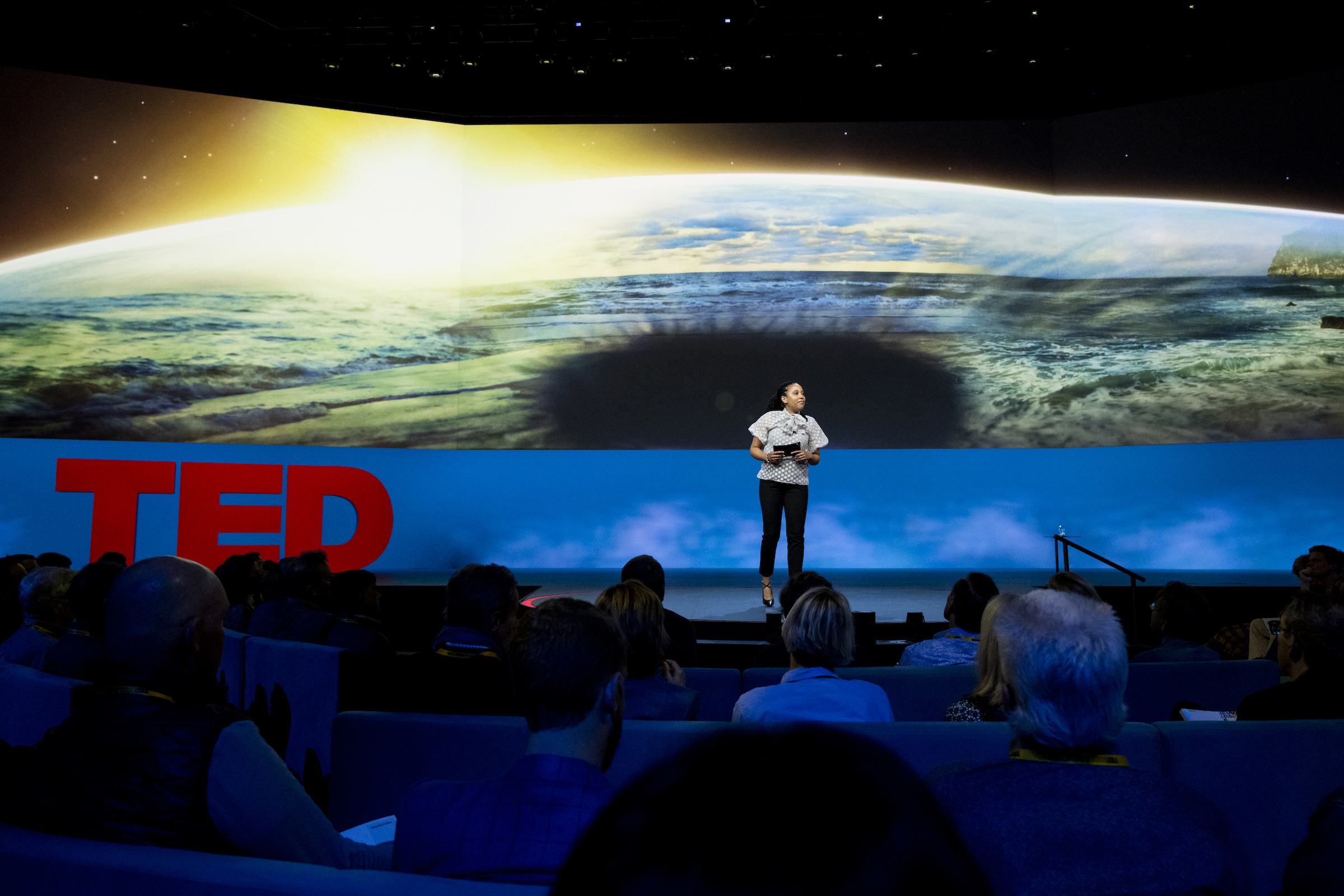 Session 8 of TED2022 focused on tackling climate change — in terms of reducing greenhouse gas emissions, adapting to the evolving conditions on Earth and regenerating what we’ve already lost.

The session was also linked to TED’s climate project, Countdown, launched in 2020 with the goal of championing and accelerating solutions to the climate crisis. The initiative has now produced hundreds of talks on climate viewed by millions around the world, all in an effort to shift public consciousness towards a new era of sustainability. Find out more about how you can get involved in Countdown.

The event: Talks from Session 8 of TED2022, hosted by TED’s Whitney Pennington Rodgers and Bruno Giussani

When and where: Tuesday, April 13, 2022, at the Vancouver Convention Centre in Vancouver, BC, Canada 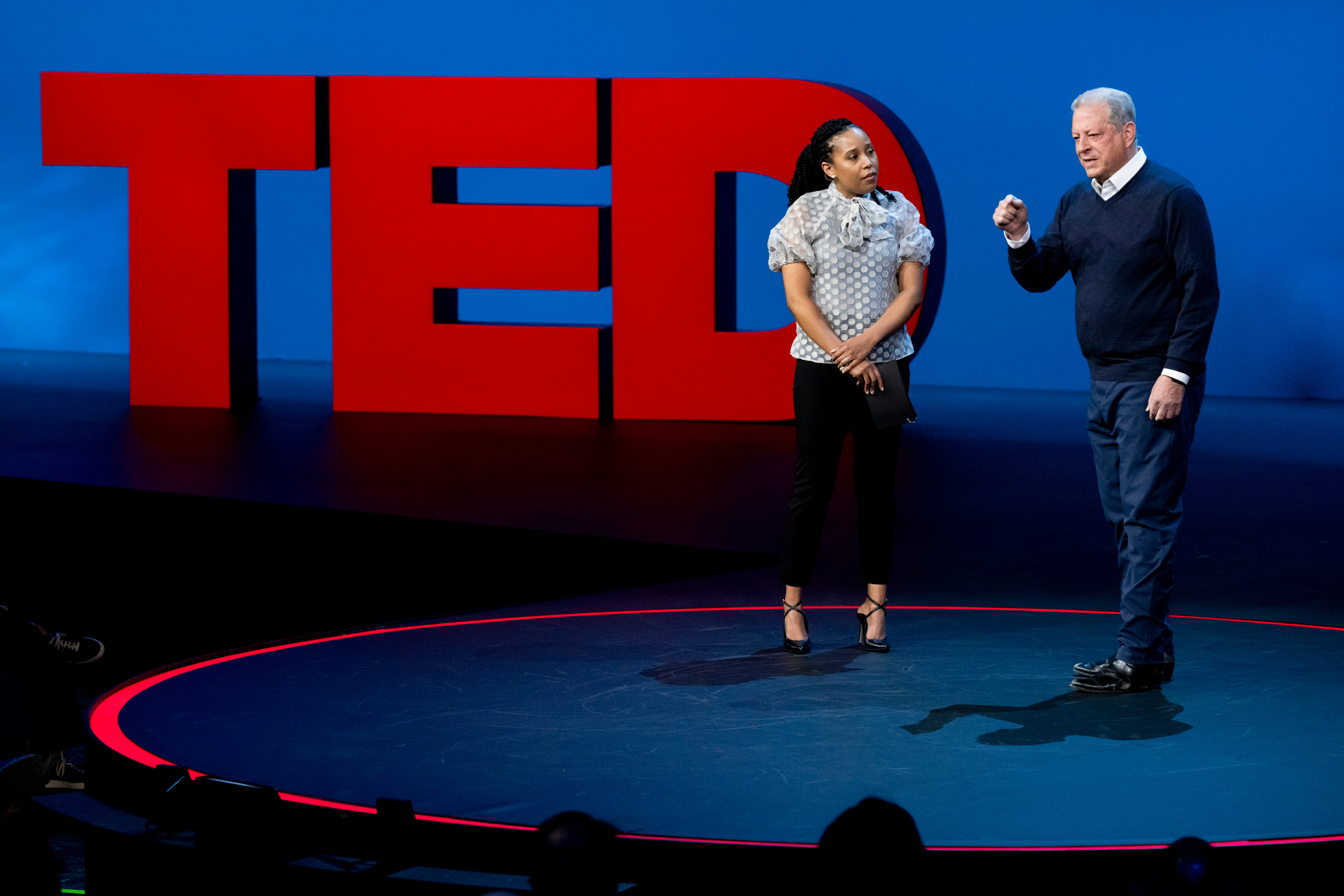 Big Idea: We need to break the paralysis of our current political systems and make real progress in the fight against climate change.

How? There has been tremendous progress in making green energy affordable, regenerative forestry and many other areas of sustainability since Al Gore’s Countdown Summit talk — but the planet is heating up faster than these solutions are being deployed. Firing up the stage in conversation with TED’s current affairs curator Whitney Pennington Rodgers, Gore helps us take stock of the current state of climate progress and calls our attention to institutions that have fallen back on their promises, pouring money into polluting sectors. He explains how the financial interests of fossil fuel companies have captured the policymaking process in key countries. Calling for a global epiphany to shake the world out of its slumber to this pressing crisis, Gore says we have the ability to stop this progressive destruction of the future of humanity and start the long healing process, but we have to break through the capture of our political systems. He points to good news in the most recent Intergovernmental Panel on Climate Change Report: that if we globally reach net-zero emissions, we can stabilize the planet’s temperature in as little as three to five years. We just need to break through the imprisonment of inaction. “Do not give up hope and remember always that political will is itself a renewable resource,” Gore says. 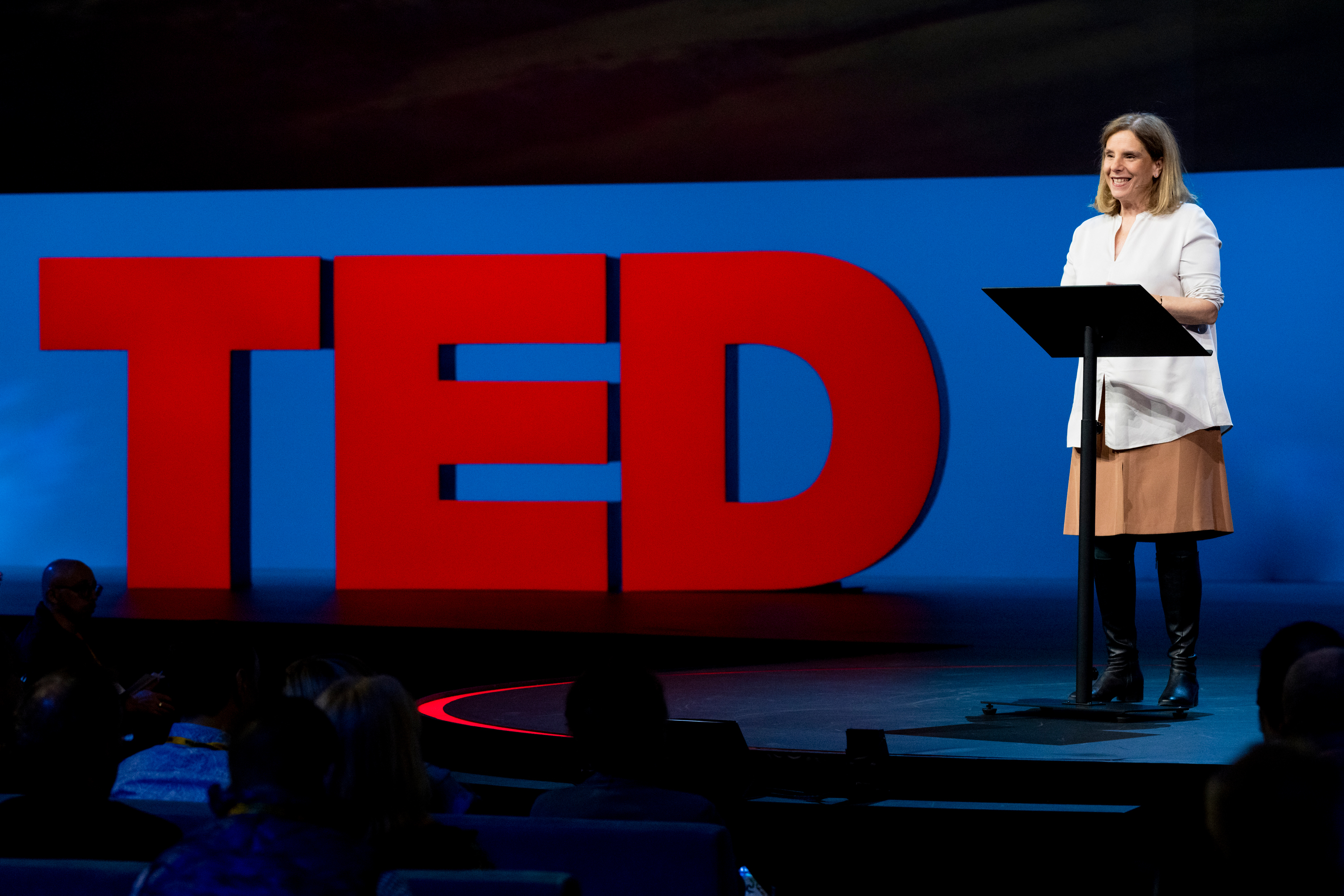 Big idea: Earth is getting too darn hot. What can we do?

Well … Extreme heat is the deadliest of all extreme weather phenomena, but that fact is overlooked simply because it’s less dramatic than flooding or gale-force winds. Humans have trouble adapting to heat, and its effects have far-reaching implications from safety and crop harvests to health and children’s education. And we know that civilization is warming the planet, fast. So what can be done? Chief heat officer of Athens, Greece, Eleni Myrivili breaks down potential approaches to this problem into three categories: awareness, preparedness and redesign. One step being put forth to create awareness is naming heat waves the way we do hurricanes. But the real task at hand is to radically redesign our urban areas beyond air conditioning, energy efficiency and cutting carbon emissions. Myrivili celebrates cities from around the world like Athens, Medellin, Seoul, Paris and Melbourne that have already started implementing more resilient urban infrastructures to combat the planet’s worsening climate conditions. But it’s going to take a total paradigm shift to instill real, enduring change, because turning up the air conditioning just won’t cut it. 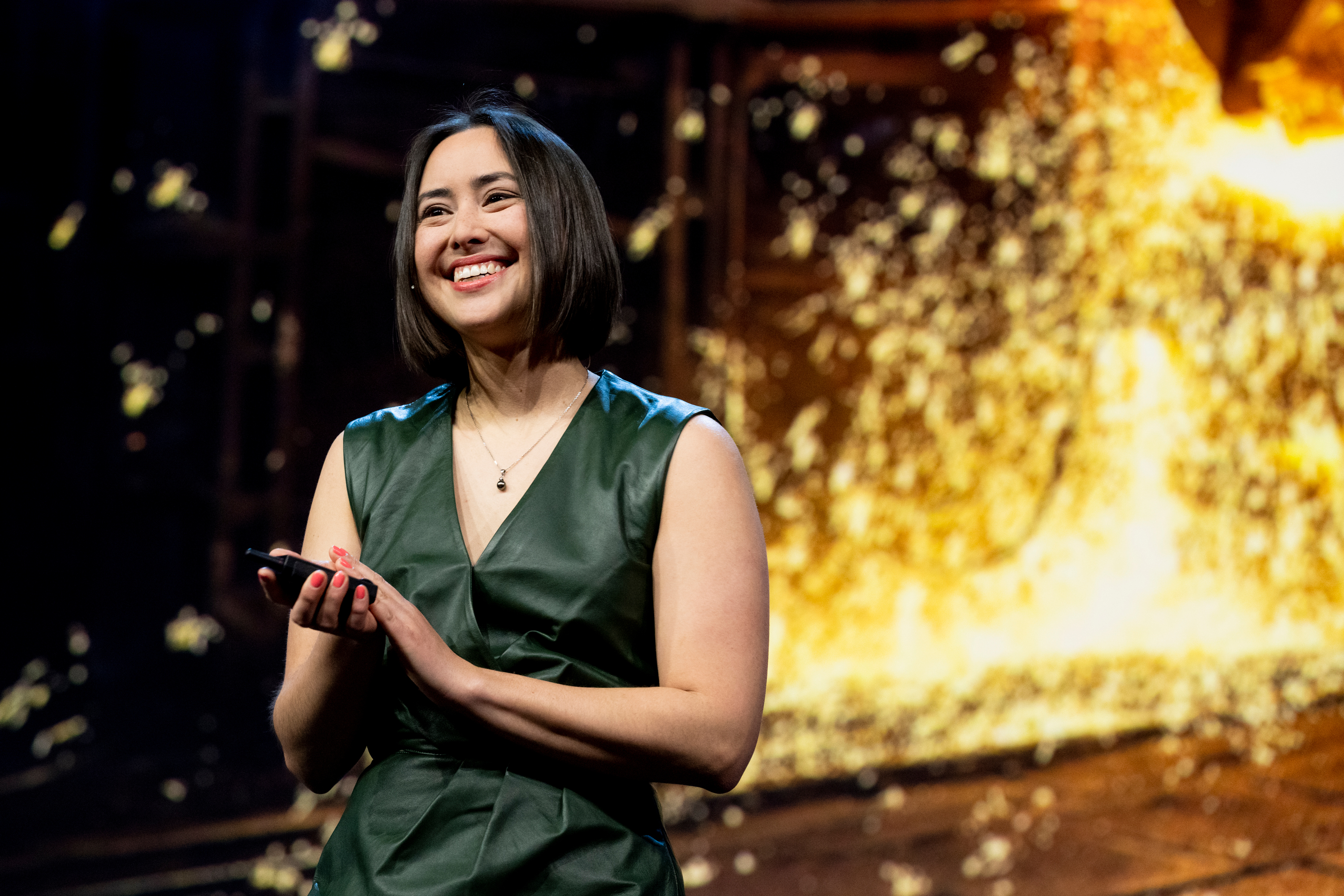 How? As climate change continues to accelerate, finding clean alternatives to fossil fuels has become more urgent than ever. Vaitea Cowan believes hydrogen power is the answer. That’s why she co-founded Enapter, a company aiming to produce ten percent of the world’s green hydrogen by 2050. While green electric power is certainly useful, it simply cannot replace fossil fuels entirely. This is because electricity produces power for only 20 percent of global energy needs; the other 80 percent is fueled by molecular energy. Think of it this way: trying to fly a plane using electricity stored in batteries would require additional energy just to power the batteries themselves! Hydrogen power is generated by using devices called electrolyzers to separate water into its molecular components: hydrogen and oxygen. The hydrogen that’s generated by this reaction is emission-free, can be stored long-term without losses and is more versatile than green energy options that generate electrons. The challenges of switching to green hydrogen energy are scale, cost and speed — but Cowan believes she has the solution. At Enapter, she’s working to mass-produce compact electrolyzers that can make green hydrogen available anywhere in the world for anyone who wants it. “We can build our world’s energy supplies sustainably, made of a lot of green electricity and a wave of green hydrogen molecules. This is how we end the fossil fuel era,” she says. 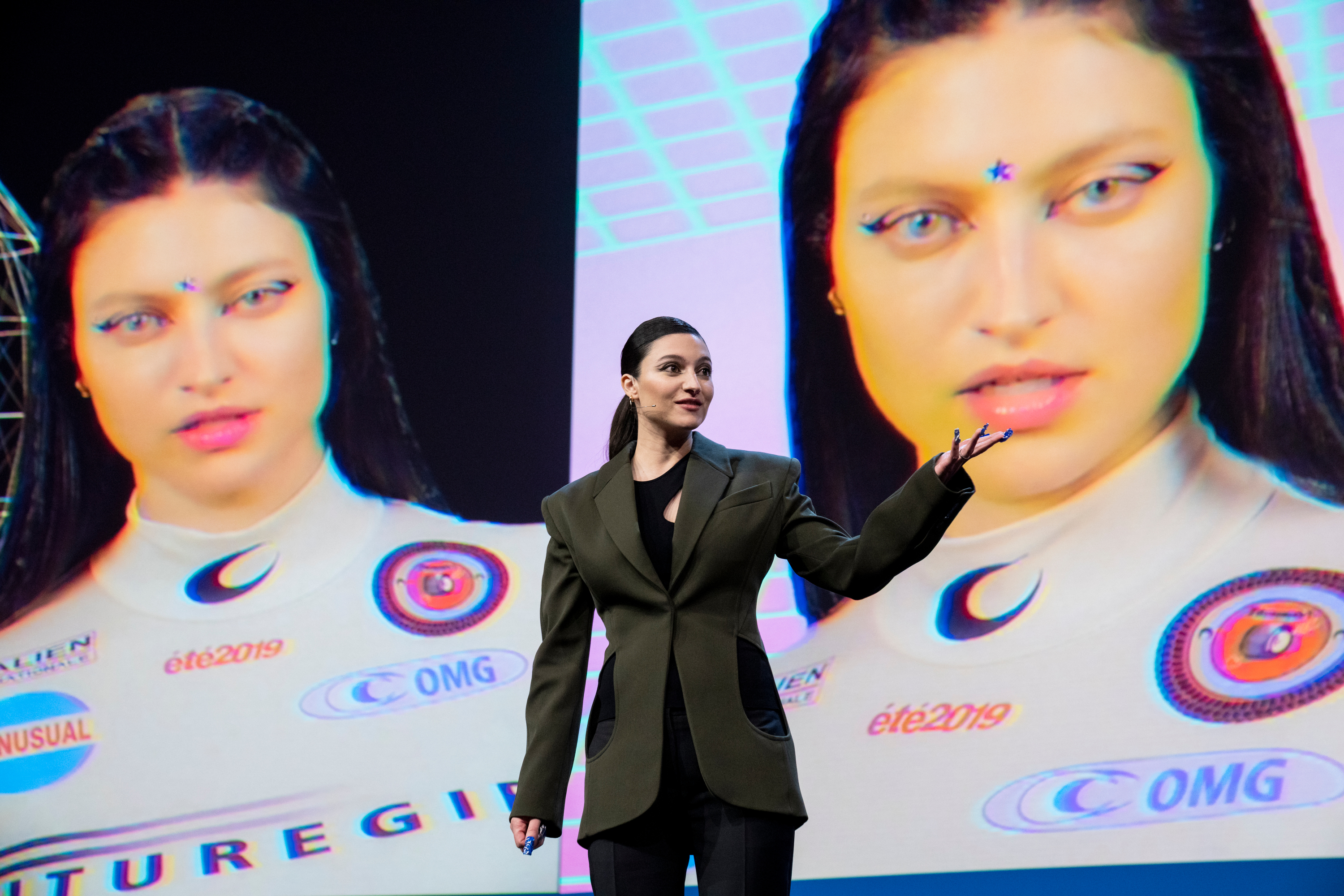 Big idea: Nuclear energy is one of the cleanest and safest ways to make electricity. It’s time for the world to go all in on it.

How? Once upon a time, nuclear energy was cool. (JFK was all about it in the 1960s.) But then, in part related to the anti-nuclear movement of the 1970s, fear of and opposition to nuclear energy grew. This opposition is still rampant today, grounded in three outdated, false objections: 1) that nuclear power is too dangerous; 2) that nuclear waste is scary; 3) that nuclear energy is too expensive and takes too long to build. Isabelle Boemeke, creator of the social media character and nuclear advocate Isodope, deftly debunks each of these three objections. For starters, while the thought of a nuclear meltdown is terrifying, the damage of fossil fuels is vastly worse and causes more than eight million premature deaths annually. What’s more, scientists have been studying nuclear waste for decades and now know how to safely contain and manage it. Finally, countries can now build a nuclear power plant relatively quickly, and it will make clean and reliable electricity for at least 80 years. Boemeke issues a challenge to wealthy nations: invest in nuclear power — heavily. It’s time to look at the promise of nuclear energy with clear eyes and recognize its potential to help avert climate disaster. 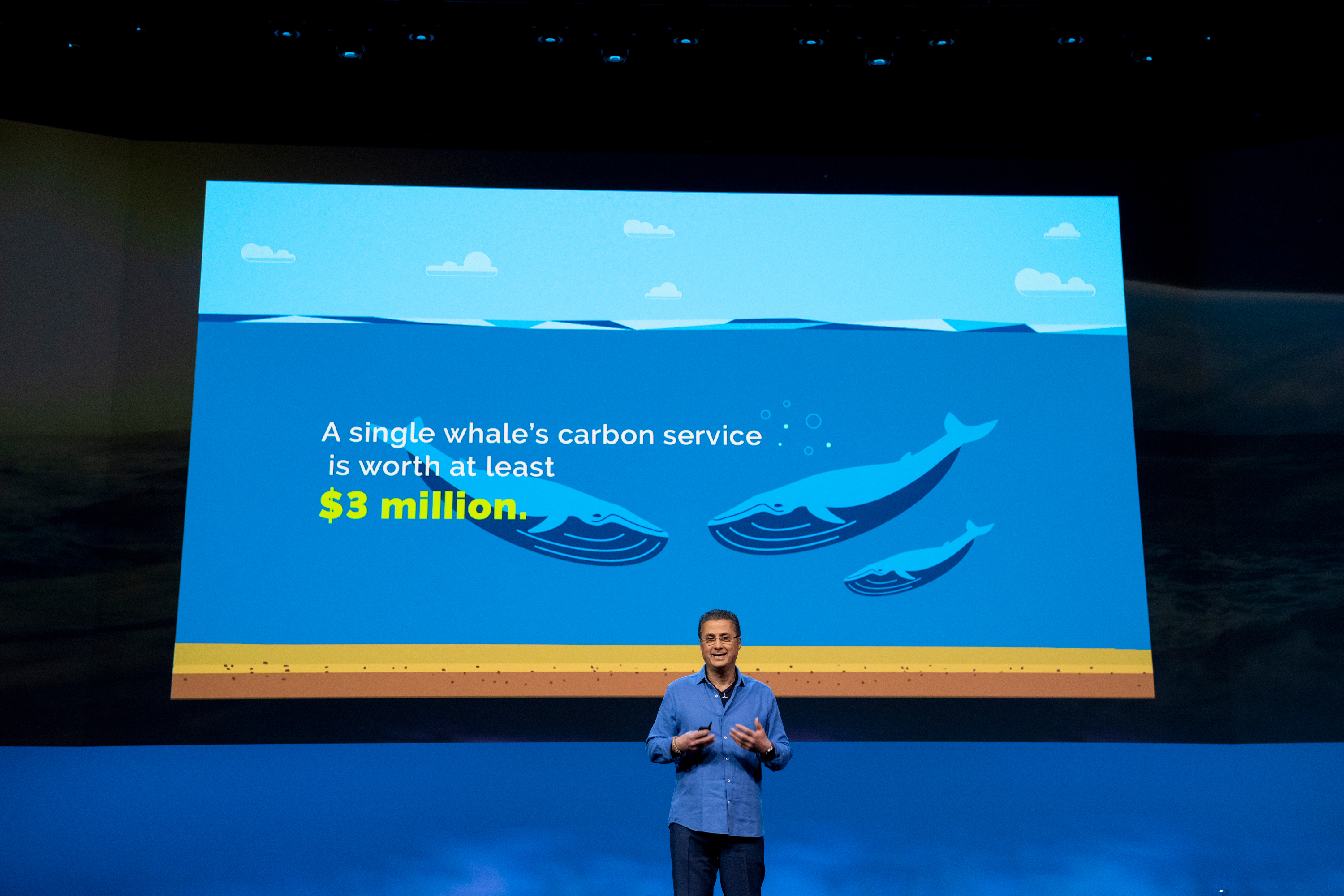 Big idea: To protect species that help sequester carbon, we ​​must translate their value to the language of dollars and cents.

How? How much is one blue whale worth in the fight against climate change? $3 million, according to financial economist Ralph Chami. As a whale grows, it sequesters tons of carbon in its body, and when it dies that carbon sinks to the bottom of the ocean where it remains trapped for hundreds of years. The value of that carbon offset dwarfs the value of a dead whale’s oil and meat by orders of magnitude. The same goes for the forest elephant, whose prized tusks pale in comparison to the total carbon each elephant removes by fertilizing jungles. Chami’s company Rebalance Earth is building markets that harness the value of carbon-reducing species in places like Gabon — home to 57,000 forest elephants. By assigning a dollar amount to forest elephants and other keystone species, Chami says, we can increase wealth and opportunity in local communities, create new​ options for carbon offset buyers and protect invaluable flora and fauna. 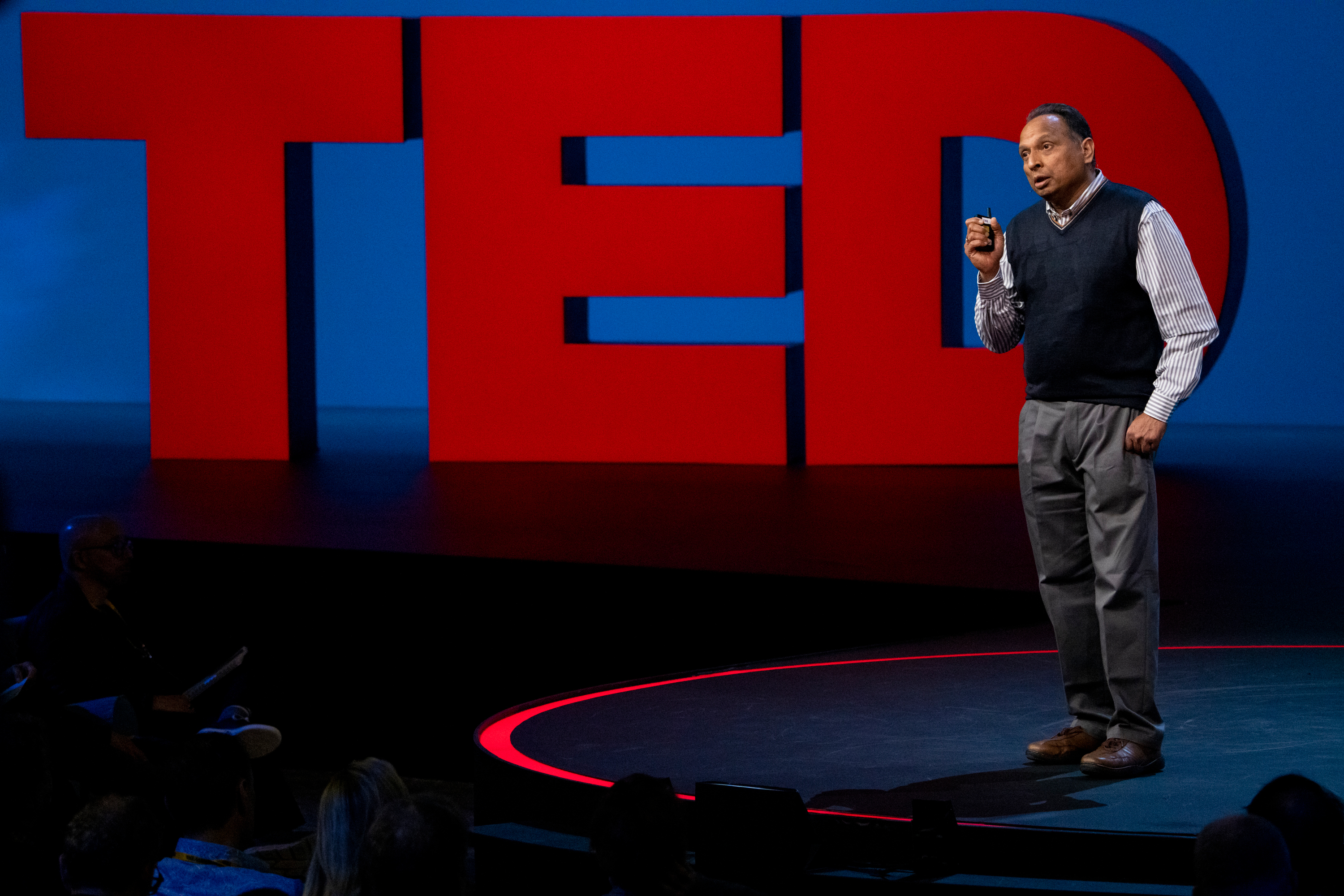 Big Idea: Nitrogen pollution from fertilized soil is a serious issue contributing to global warming, but administering antibiotics to crops can safely — and sustainably — sprout a “green revolution.”

How? Nitrogen fertilizer dramatically helps boost yields on farm fields — but it has an unintended consequence: it causes a surplus of microbes that creates polluting nitrates and nitrous oxide (better known as laughing gas). Unfortunately, it does a lot more than make you giggle before a dental procedure, Guntur V. Subbarao explains. It’s also a potent greenhouse gas that contributes to global warming and pollutes water, soil and air. Some plants have a unique ability to stop this harmful process from occurring by exuding antibiotics from their roots that suppress the microbes, effectively keeping nitrogen leakage at bay. These antibiotics, called biological nitrification inhibitors, can reduce greenhouse gas emissions and nitrate pollution while protecting soil fertility. Subbarao talks us through how he and his team introduce these antibiotics to wheat plants, reducing the need for fertilizer while increasing yields. This incredible solution comes just in time, offering a path to help feed an ever-growing human population — without wrecking the planet. 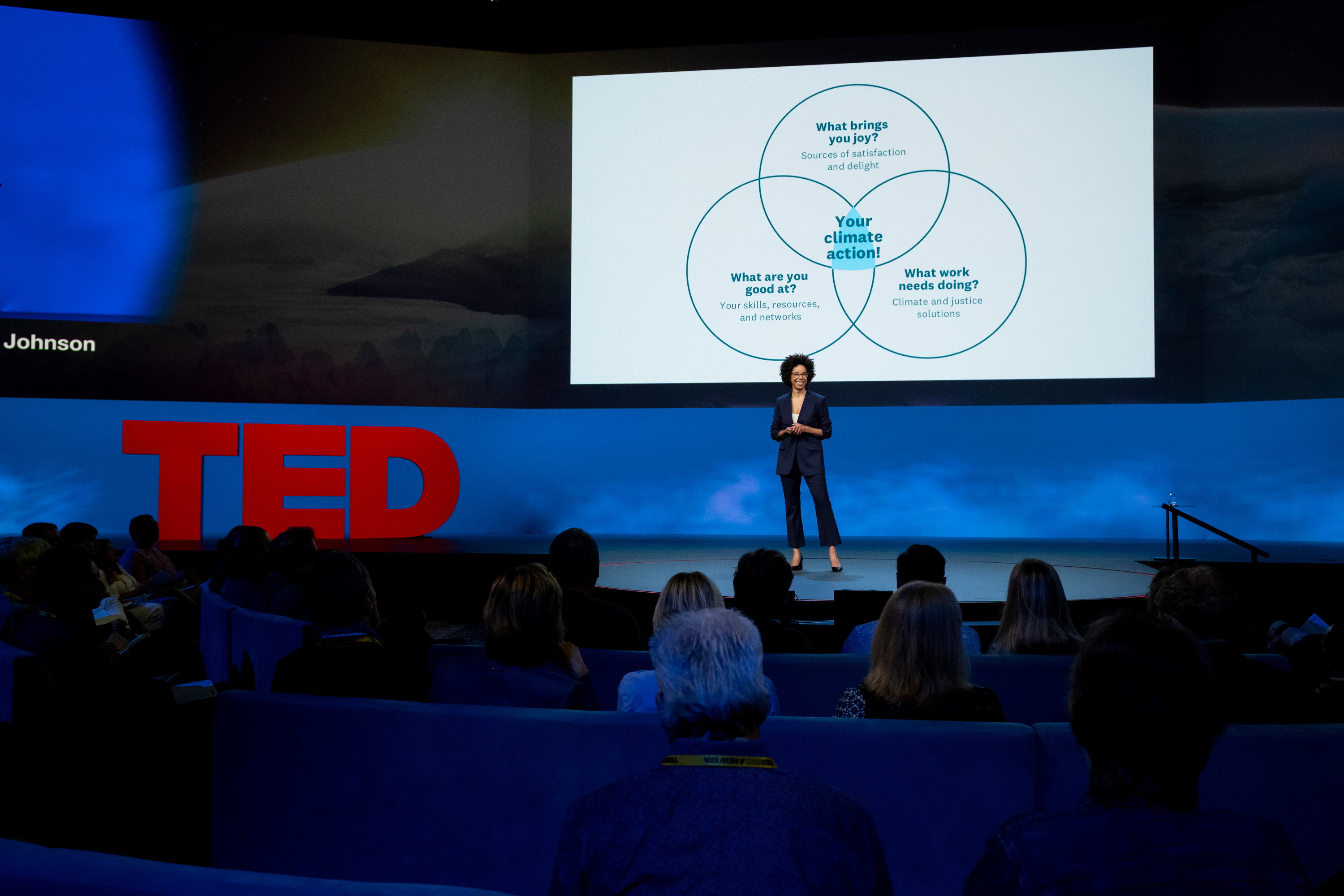 Big idea: We all could play a role in meeting the needs of the climate movement by tapping into our skills, resources and networks in ways that bring us joy — and by supporting others to do the same.

How? “Averting climate catastrophe: this is the work of our lifetimes,” says marine biologist Ayanna Elizabeth Johnson, who believes that while we heed the media and corporations’ calls to reduce our carbon footprint, vote for new legislation and spread the word on solutions, we could be more active participants in enabling radical change. Johnson invites us to fill in what she calls a “climate action venn diagram,” where each of three circles represents a specific question: What are you good at? What is the work that needs doing? What brings you joy and satisfaction? By identifying the area where these three areas intersect, we reveal our unique climate-fighting superpowers. Johnson emphasizes that this approach doesn’t require us to uproot our lives and become full-time climate activists — rather, it seeks to consolidate even our smallest meaningful actions and kickstart the implementation of real solutions. “The goal is to be at the heart of this venn diagram for as many minutes of your life as you can,” she says. But the work doesn’t stop there. Even as we chart our own green paths, she urges us be cognizant of barriers to participation, like racism and inequality, that might prevent others from taking action, and to support them in their journey, too. “The question should not merely be what I can do to help address a climate crisis, but what can we do together?” she says. 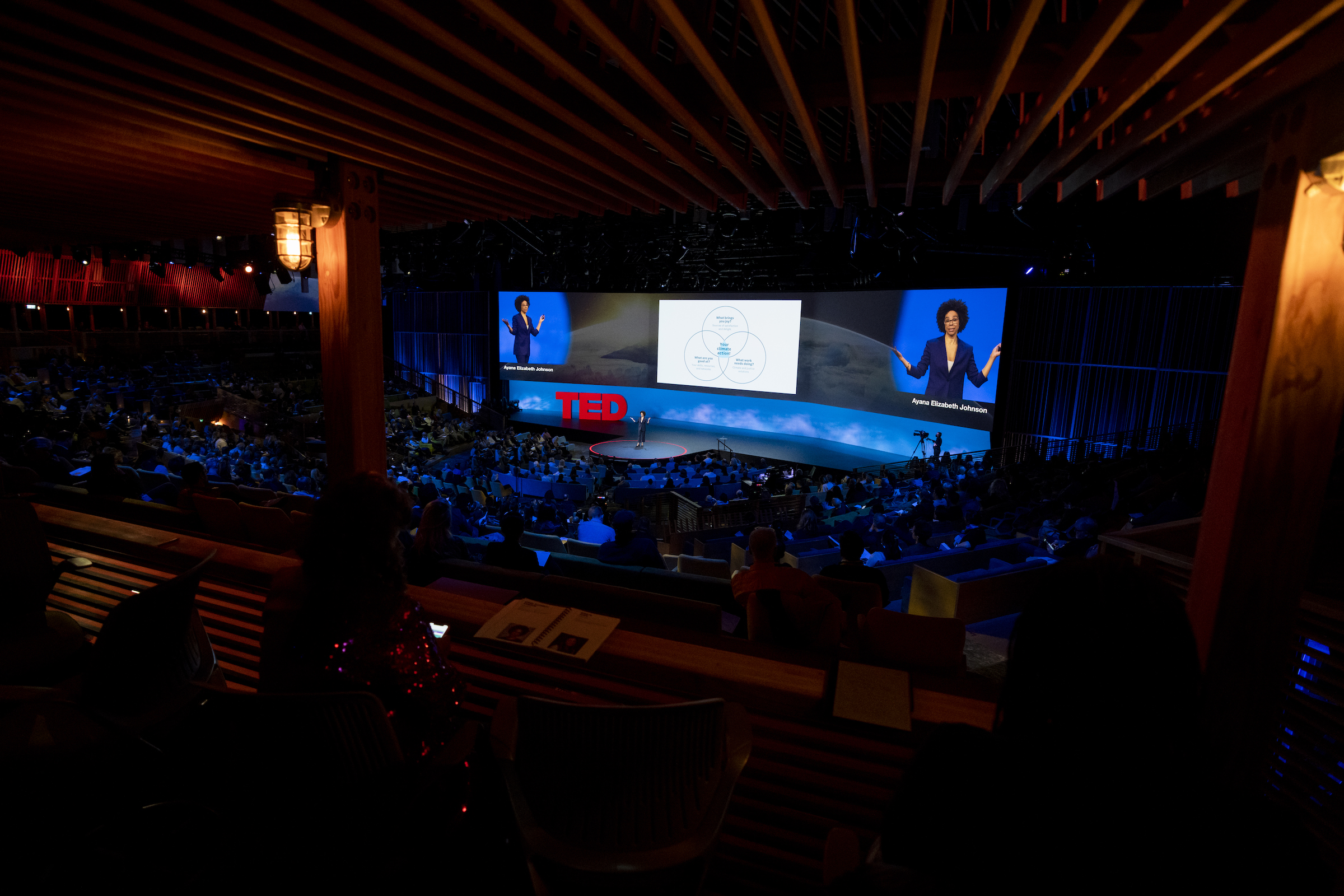