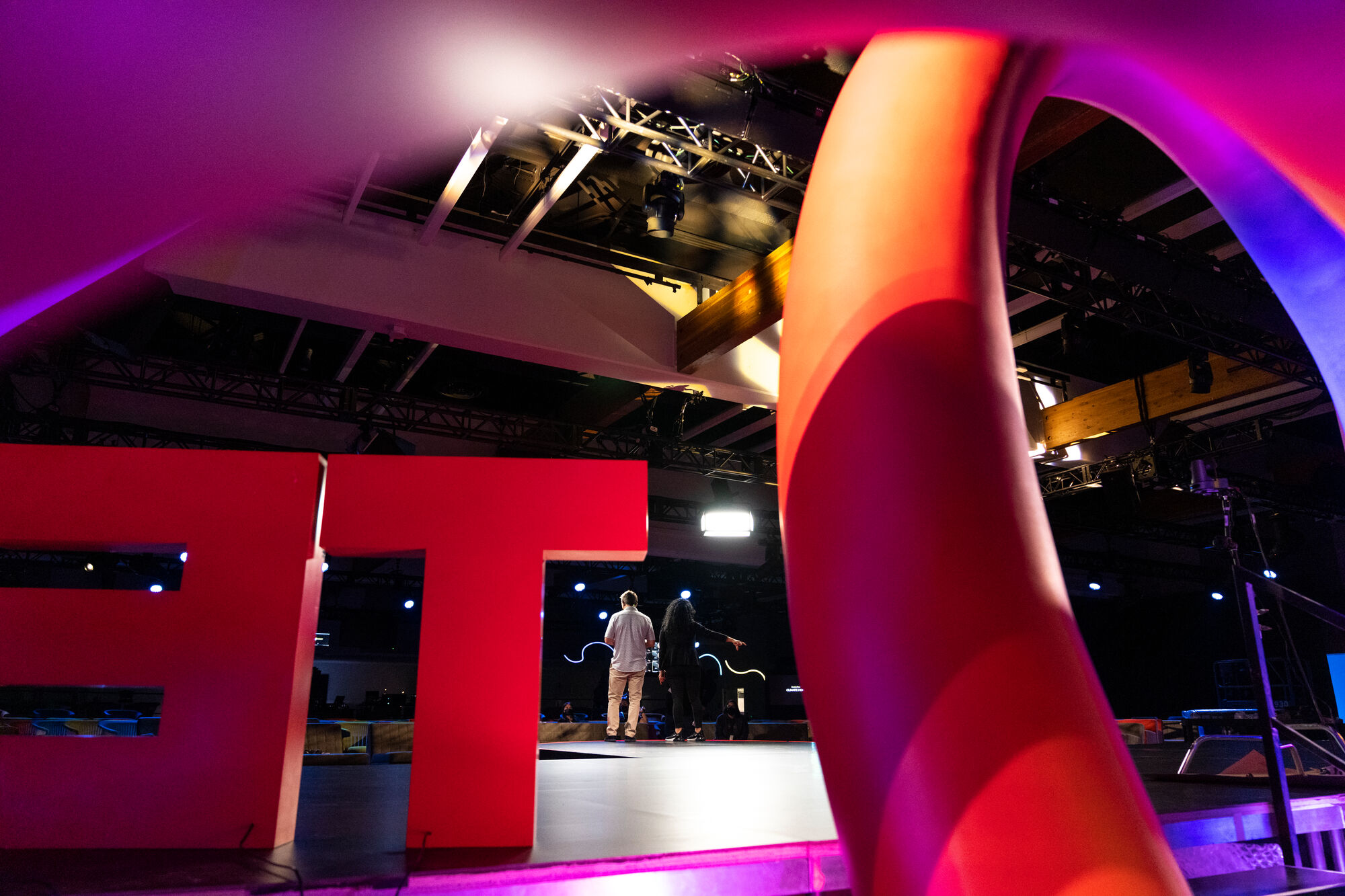 COVID and climate change have shaken the global promise of the 21st century to the core. But despite our need to face the threats that pandemic and disaster pose to human survival, humanity faces a unique opportunity to rebuild an interconnected world, and to reaffirm our core ideals: among them, the belief that in the face of adversity, the world must move forward at all costs.

Like everyone else, TED must transform to fit this new reality without losing the optimism that launched it into the global conversation in the first place. In 2021, TED returned to its 1984 birthplace — Monterey, California — as both an embrace of its roots, a celebration of the first in-person TED event since the start of the pandemic and an opportunity for reinvention. For TEDMonterey, we sought to reimagine the stage itself, down to the fundamentals — including TED’s iconic red carpet circle.

Although it often escapes the notice of viewers, the red carpet circle each speaker stands in during their talk has become central to TED, positioning each speaker inside a focal point for both the camera and the audience. How, then, could TED alter something so emblematic of the continuity between the thousands of speakers who’ve appeared at TED, TEDx and other TED events over the last four decades? How does TED both hold on to tradition, and continue to inspire the optimism needed to brainstorm global solutions?

To understand the challenges surrounding such a deep transformation, I spoke to Mina Sabet, TED’s director of production and video operations. TED felt a need not only to respond to new realities in the world, but also to banish the idea that the ideas shared at TED belong to only a select few. As Sabet put it:

We had been wanting to redesign the circle for a while, to rethink what the iconic circle looks like. … The circle felt like our speaker was confined to that space. We wanted it to be more open for possibility, that ideas have this ripple effect, and feel like they’re rippling outside into the world — not just the people in the room or on the stage, but for everybody to reap the benefits of those ideas.

Enter David Korins, an Emmy-award-winning creative director who’s invented onstage universes for musicians ranging from Elton John to Lady Gaga, brands like Google and Broadway shows like Hamilton (among many others). With his visionary stage design, Korins was the ideal architect for the transformation TED sought. Sabet recalls, “We came to David with this challenge: we don’t want to lose our brand, but we would love to reimagine what this could look like.’ 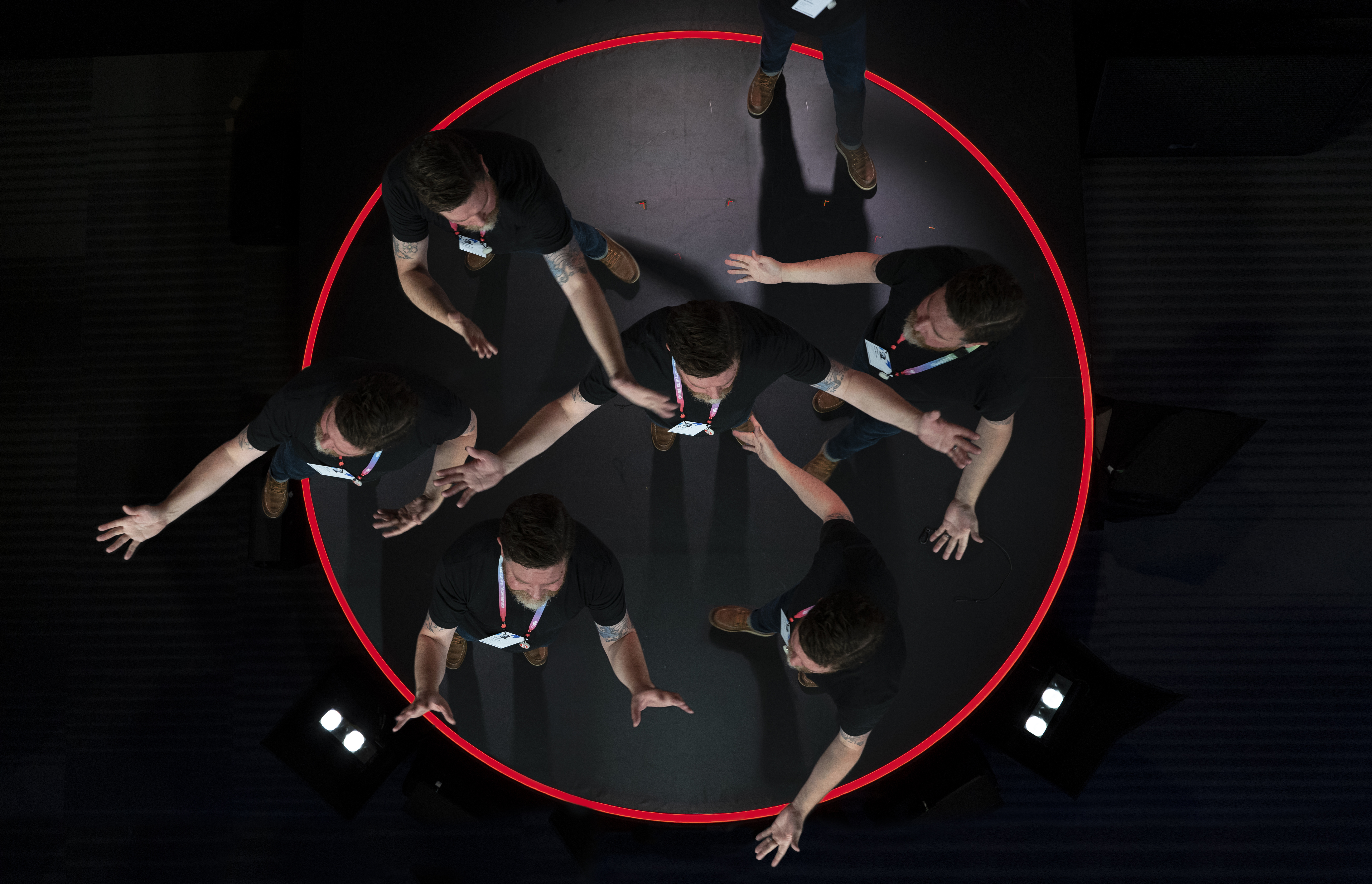 TEDMonterey was a perfect moment for a fresh take on TED’s look. In Korins’ words, “For it to be happening in the very city that TED originally started in feels full circle and very elegant.” But the significance of the rebrand goes much farther. He continued:

The red circle is [TED’s] version of the Nike swoosh. It is their version of the McDonald’s arches. It is their icon … their entire brand identity. The pause in in-person presentations allowed TED to have a conversation about, “How can we create this case for optimism and moving forward?” They came to me, and I said, “Well, I know this sounds like a crazy idea, but what happens if we get rid of the red circle?” Which is like McDonald’s [saying], “What happens if we get rid of the golden arches?”

So I came up with this idea that we would maintain the circle, but instead of having it be a solid red carpet, we would create essentially a red neon ring or a halo. The presentation of the whole idea would be harkening back and honoring the past, meeting people where they are and looking to the future. 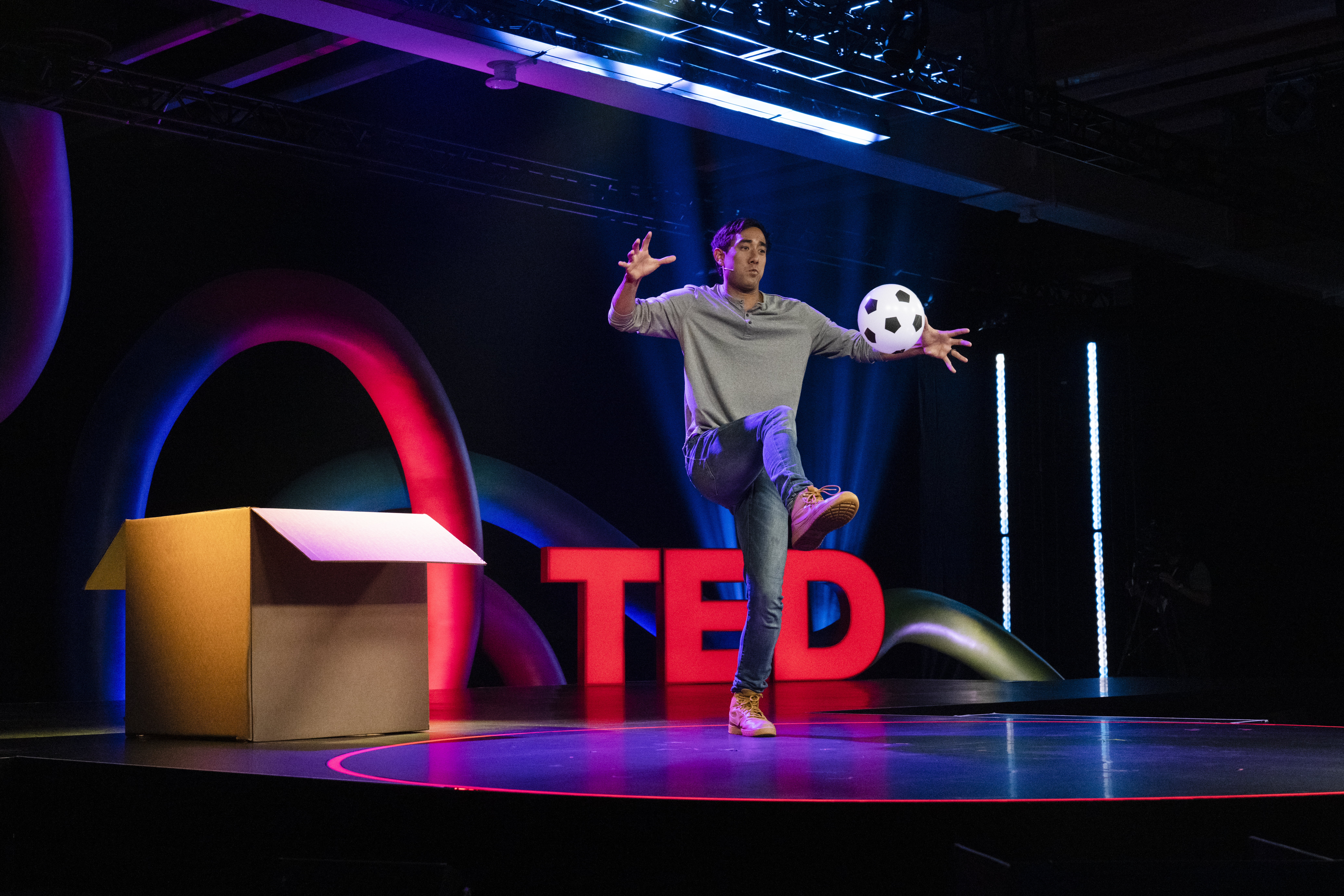 And indeed, while the shape and color of the ring harken back to TED’s history, its subtle foregrounding on the new stage emphasizes the novelty of its design. Floating forward from the gently undulating swirl of forms at the rear of the TEDMonterey stage, the circle seems to levitate and carry each speaker into the middle of the audience itself, emphasizing that they do not stand apart from the world, but within a multitude of minds. 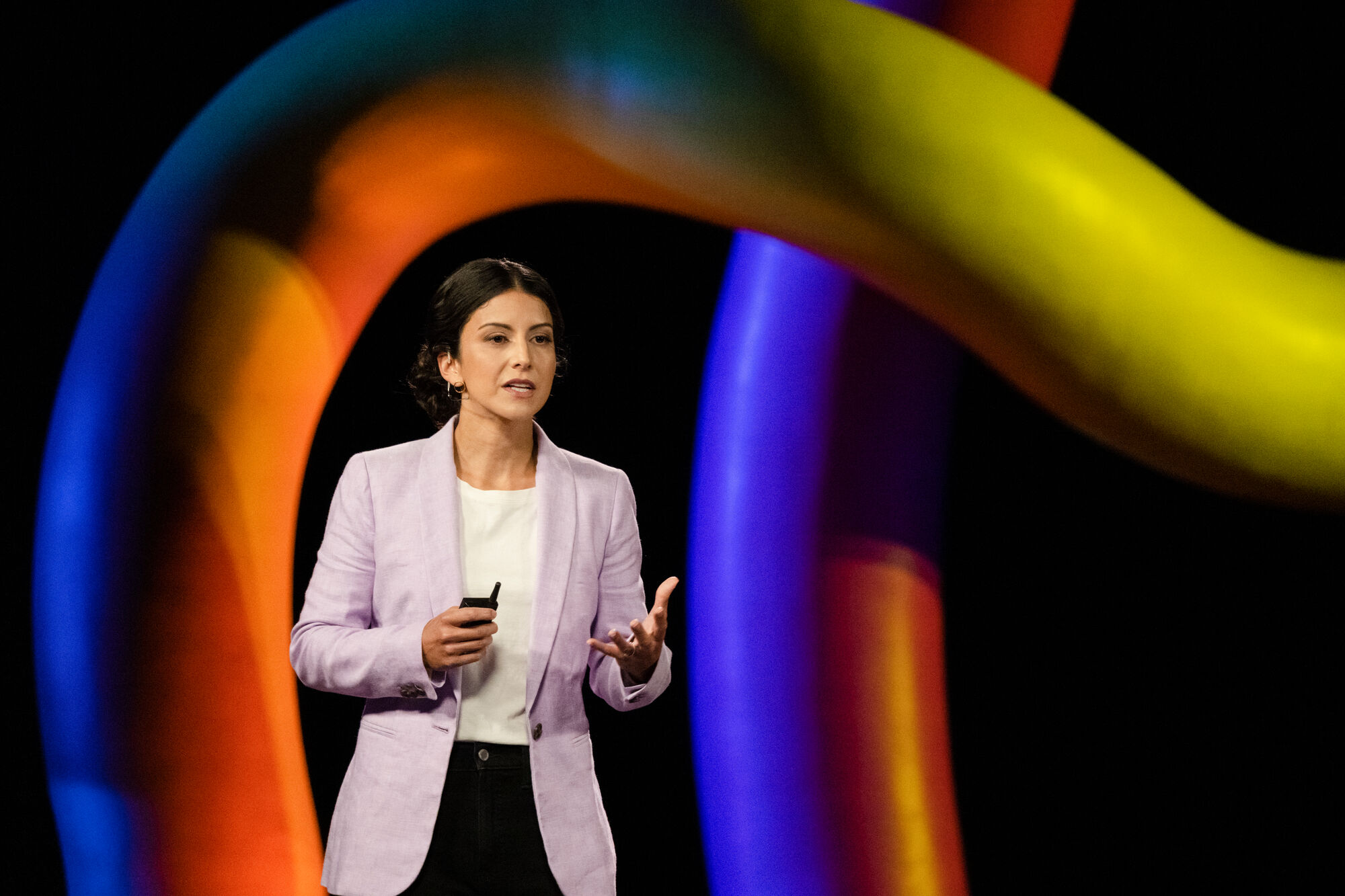 Beyond the red ring itself, the entire stage should resonate not only with those in the room, but to those sitting in front of computer screens thousands of miles away. But even while making a visual case for optimism, the design must also acknowledge the sobering realities of the 21st century. I asked Korins how he chose to interpret the case for optimism. His response:

And “kinetic” is an apt way to describe the colorful forms that frame the TEDMonterey stage. Gently looping and painted with a varied palette of primary and secondary colors, the grace and subtlety of these interconnected loops disguise their mass. Korins again:

TED came up with a really interesting style guide that created these neural pathways, graphically. I tried to find a way in the whole stage design to float it in darkness, and then have these neural pathways growing from the floor to the ceiling and straight through. And so they are these wiry, tenuous, beautiful, very colorful, twisting, winding structures. They exist as almost a forest backdrop.

Indeed, there’s nothing ominous and threatening about these “neural pathways,” but there’s nothing frivolous or comforting about them either. Their twists and turns embody complexity and wonder, and invite us to contemplate our world more deeply, relishing its dark corners rather than fearing them. The forms are a meditation on what it means to be optimistic in the midst of an uncertain future. 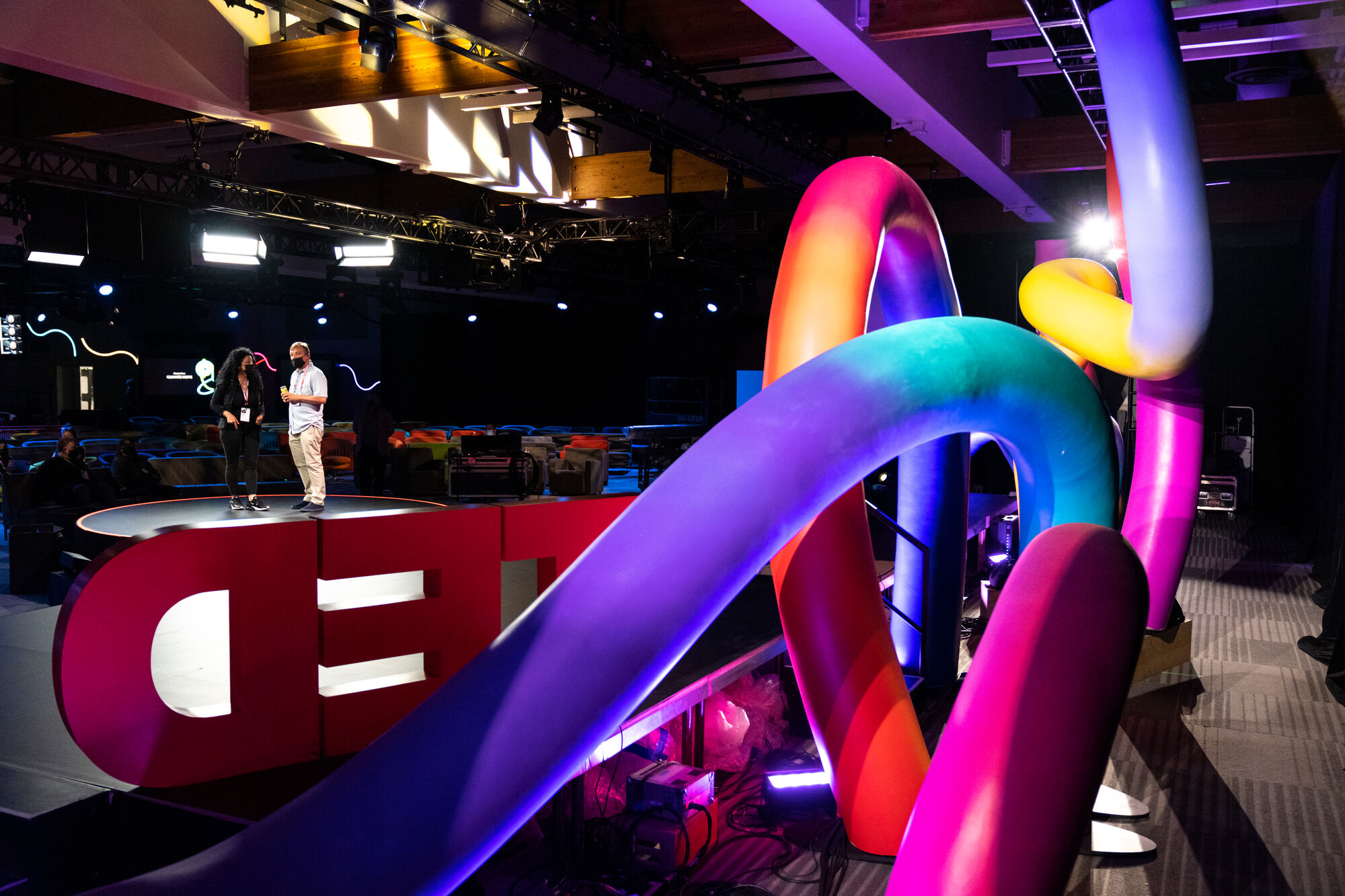 And while they seem weightless, the forms are actually massive painted wooden forms, a sculptural undertaking that would be daunting even in the best of times. Korins reminds us that during COVID, the task is exponentially harder, as he must guide a small army of artisans (from a computer screen 3,500 miles away from the scene shop) as they “render something from a completely dark void into reality and full color and full scale” — a “Herculean task.” But, like Hercules, they have met and surpassed all obstacles.

The (visual) case for optimism 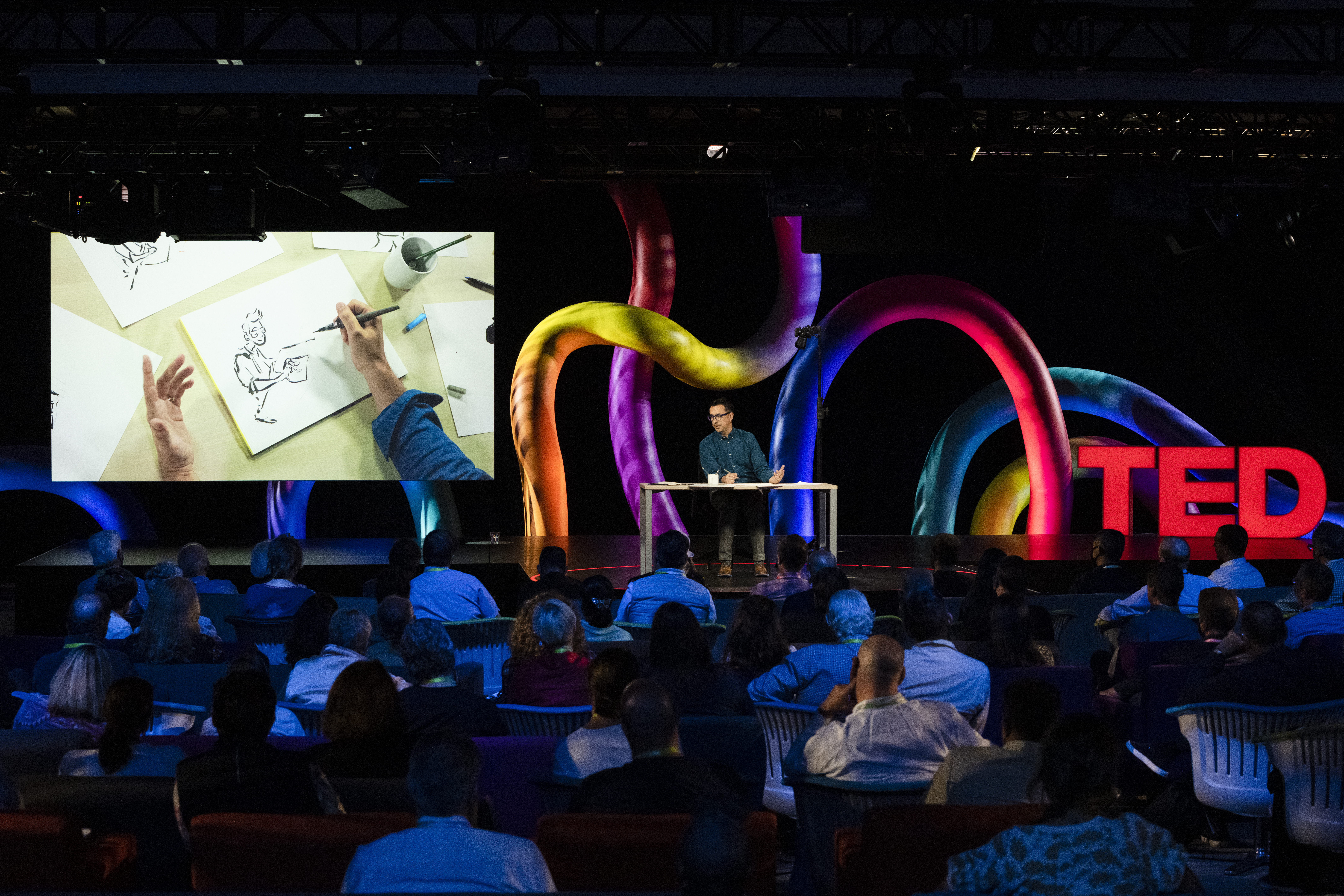 TED and Korins (now TED’s Theater Designer in Residence) promise future iterations and transformations for not only the stage, but also for the red circle — perhaps fittingly, as the pandemic has taught us that nothing is static, and change is inevitable. As Korins admits, “There isn’t one person on this planet who hasn’t been indelibly changed by the pandemic and what has happened over the last 17 months.” But the framing of the TED stage itself invites viewers to consider that those changes, far from representing disaster, in fact present us with new ways to contemplate the world’s new boundaries with hope and confidence — indeed, making a powerful case for optimism.