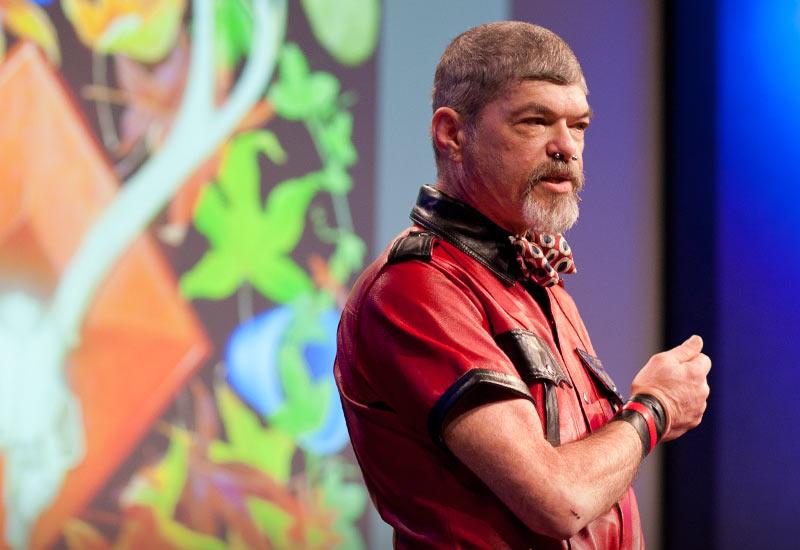 In March 2007, a handsome iron-haired man stepped onto the low stage at Monterey dressed in full leathers, and gave what might be the most beautiful 3-minute TED Talk of all time. Jok Church told a story from his childhood:

I was the class queer. I was the guy beaten up bloody every week in the boys’ room, until one teacher saved my life. She saved my life by letting me go to the bathroom in the teachers’ lounge. She did it in secret. She did it for three years.

Jok got a little older, escaped to San Francisco and became active in AIDS organizations, learning, as many did in the 1980s and ’90s, how to lovingly care for dying friends. And one day, that teacher, the one who’d saved his life, called him. Watch the talk, would you?

A longtime techie, Jok was the creator of You Can with Beakman and Jax,  a science comic strip for kids that ran in Sunday papers and inspired the long-running TV show Beakman’s World. As his friend Richard Bolingbroke writes:

Kids would write in with questions like “why is the sky blue” and he would create this amazing at-home science experiment to demonstrate how to prove this, along with an upside-down line of commentary, which often offered unsolicited personal advice on being a free thinker.

Which sounds exactly perfect. Jok died of a heart attack on April 29, 2016. He will be much missed.