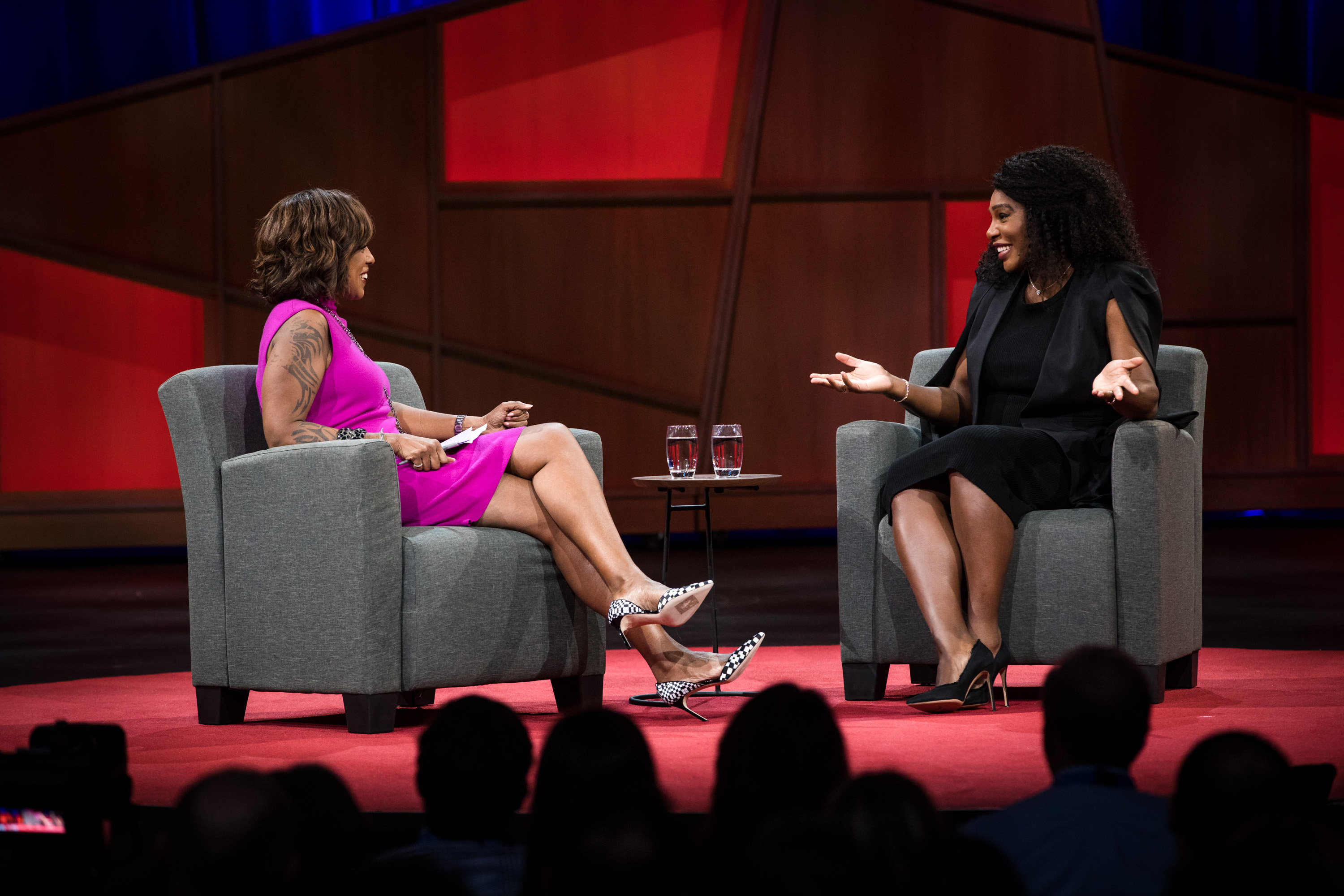 Serena Williams starts her interview on the TED2017 stage with a confession to journalist Gayle King: the photo that let the world know she was pregnant? She posted it by accident.

“I was on vacation, taking time for myself, and I have this thing where I’ve been checking my status and taking a picture every week,” she says. “I’ve been just saving it, but you know how social media is — you press the wrong button and…” Williams shrugs. “My phone doesn’t ring that much, and thirty minutes later, I’d missed four calls. So I picked it up and realized, ‘Oh no.'”

Williams says she found out about her pregnancy two week before the Australian Open, which she won in January — beating Steffi Graf’s record for career Grand Slams. “I was nervous,” she says. “I wasn’t sure what to do. Can I play? I know it’s very dangerous in the first 12 weeks or so, so I had a lot of questions.” But she decided she needed to. “I knew that at that moment, it was important for me to just focus,” she says. “I had to take all that energy and put it in a paper bag and throw it away. I really felt like I didn’t have time to deal with any extra emotions — any extra anything.” She felt immense pressure. “Pregnant or not, no one knew,” she says. “Every tournament where I show up, I’m expected to win. If I don’t win, it’s actually bigger news.”

So, King asks, is she planning to return to tennis after she becomes a mom?

“I definitely plan on coming back — I’m not done yet,” says Williams. “My story isn’t over.” She’ll be 36 — not old in normal life, but quite advanced for tennis. “I’m really inspired by my sister, who’s a year older than me. If she’s still playing, then I know I can play,” says Williams. “This is just a new part of my life. My baby is going to be in the stands, hopefully cheering for me and not crying too much.”

King wants to know about her engagement to Reddit founder Alexis Ohanian.

“You can tell he’s into technology,” jokes Williams, as King shows a photo of the two of them together. But then she gets more serious. “I never felt pressure to get married, and I can’t say I’m the marrying type. I love my life. I love my freedom,” she says. “I hear that kind of changes. I love my career, and I didn’t want anything to interfere with that. … When he proposed, I was almost angry. Not almost, I was angry because it was right in the middle of my training season and I thought, ‘I have to win the Australian Open.’ … I really wanted to pass Steffi Graf’s record.”

So what drives this fire to win, asks King?

Gayle’s next question: what’s her dynamic with sister Venus Williams?

“Playing Venus is like playing myself, because we grew up playing each other,” says Williams. “She’s my toughest opponent because she’s tall, she’s fast. She hits hard like me. She serves like me. It’s really like playing a wall. And she knows where I’m hitting the ball before I hit it. When I go out there, I really have to shut down my mind and say to myself, ‘You know what, I’m playing a great player. And today, I have to be better.’ … I have to show up and want it more than anyone else in this moment.”

“On the court, we are mortal enemies, but the second we shake hands, we are best friends again,” says Williams. “She’s the love of my life, she’s my best friend, she’s my soulmate.”

King comments on Williams’ status as a role model, given that she’s a black woman often in the media spotlight. Who did she want to be like when she was young?

Steffi Graf, Monica Seles, Pete Sampras, says Williams. “I would see what they did. I noticed that Steffi and Monica wouldn’t really talk to the other players — they were just so focused. I would see Pete Sampras and the technique he did.”

As a young girl, she wasn’t a star. “People say, ‘Oh, she’s talented, she’s athletic.’ No, I really wasn’t. I was small for my age — I got taller when I got older. I think maybe Venus ate all the Wheaties,” she jokes. “That’s one of the reasons I fight so hard and work.”

So, asks King, wrapping it up, “What have you learned from losing?”

“I hate to lose, but losing has brought me to here today. The only reason I am who I am is because of my losses. Some of them are extremely painful, but I wouldn’t take any of them away,” she says. “Every time I lose, it takes a long time for me to lose again, because I learn so much from it. I encourage everyone that I talk to — I mean, listen — if you lose or if something happens, not in sports, but in business or school, learn from it. Don’t live in the past, live in the present.”