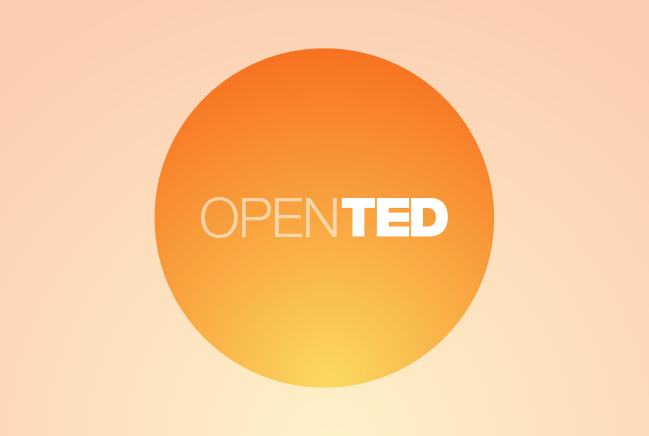 You have an idea. A good one – one that will make people think. But giving a TED Talk on a stage in front of an audience? Well, that doesn’t quite feel like the right way to express it.

If giving a traditional TED Talk isn’t your style, you may be excited to hear about The OpenTED Project — a new experimental initiative launching today to uncover ideas in all forms. Through OpenTED we’re erasing the lines around what is and isn’t a “TED Talk” and soliciting ideas that come in any form capturable on video. Through OpenTED, you can show us an idea as a documentary, an invention, an original animation, video poetry, song lyrics, monologues, dialogues, art, choreography  — really, in any form you can imagine to communicate your idea to others.

The OpenTED Project is your personal invitation to share your idea — be it grand and global, or individual and personal — with the world.

The only rules for The OpenTED Project: your idea needs to exist as a video, and it cannot exceed six minutes. And the expression of an idea really is key. Great OpenTED videos will inspire others to think, learn and even act. Whether your idea is a product, a campaign, a line of inquiry or a revision of history — it should come with a light bulb over it.

If you have an idea, submit your video. The best ones — as voted on by members of the OpenTED community — may just become a TED Talk of the day, starting in the fall. Other OpenTED speakers may get an invitation to attend or appear at one of our conferences.

Some submissions might look a bit like a filmed talk, but others will undoubtedly come in packages we never could have imagined.

We plan to share your submissions with the world in grand style in the fall, where the global community can view and vote on them.

Read all the fine print, and find instructions for submitting your video to The OpenTED Project »