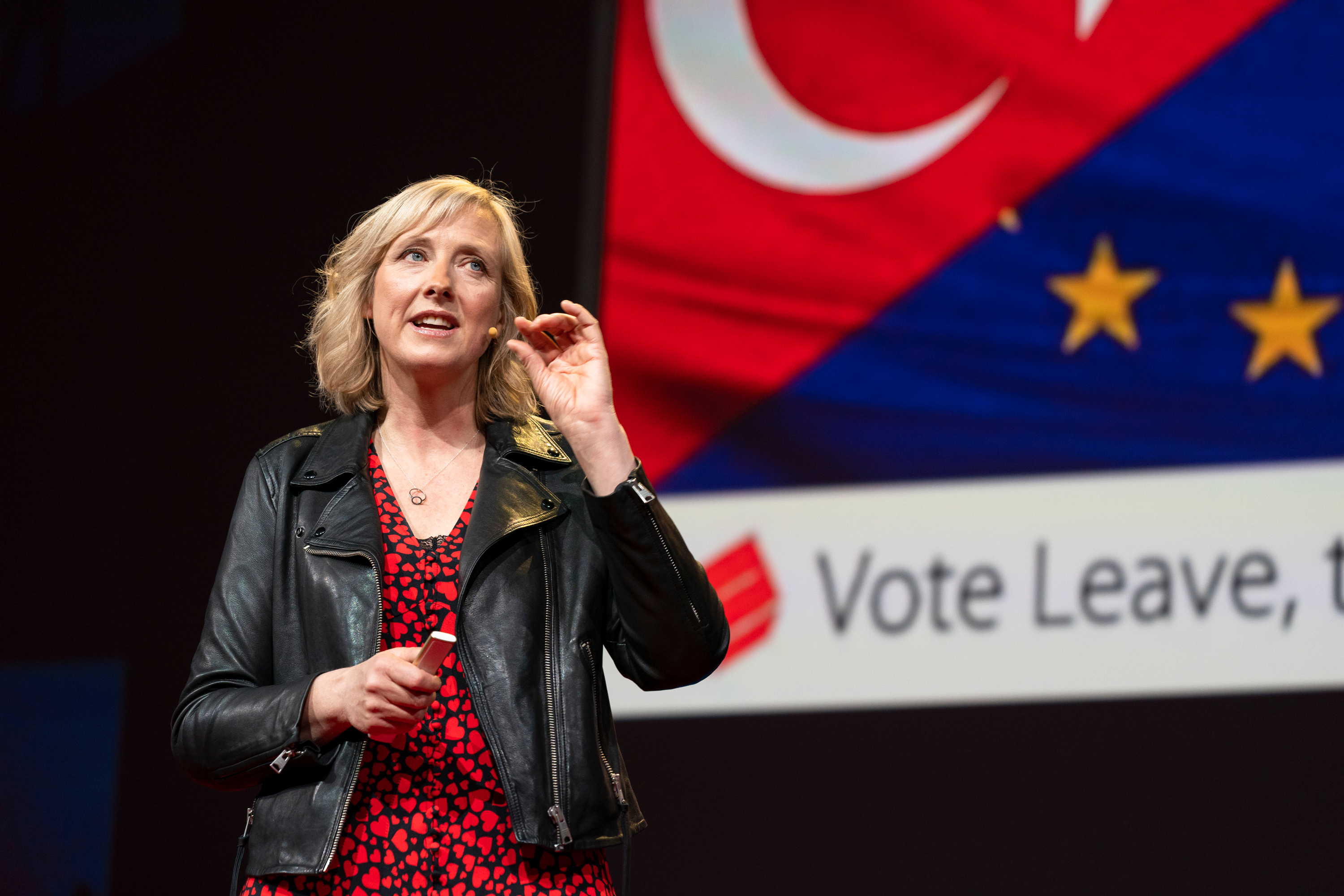 Journalist Carole Cadwalladr explores how social media platforms like Facebook exerted an unprecedented influence on voters in the Brexit referendum and the 2016 US presidential election. She speaks during Session 1 of TED2019: Bigger Than Us, on April 15, 2019 in Vancouver, BC, Canada. (Photo: Bret Hartman / TED)

The day after the Brexit referendum, British journalist (and recently announced Pulitzer Prize finalist) Carole Cadwalladr went to her home region of South Wales to investigate why so many voters had elected to leave the European Union.

She asked residents of the traditionally left-wing town of Ebbw Vale, a place newly rejuvenated by EU investment, why they had voted to leave. They talked about wanting to take back control — a Vote Leave campaign slogan — and being fed up with immigrants and refugees.

Cadwalladr was taken aback. “Walking around, I didn’t meet any immigrants or refugees,” she says. “I met one Polish woman who told me she was practically the only foreigner in town. When I checked the figures, I discovered that Ebbw Vale actually has one of the lowest rates of immigration in the country. So I was just a bit baffled, because I couldn’t really understand where people were getting their information from.”

A reader from the area got in touch with her after her story ran, to explain that she had seen things on Facebook, which she described to Cadwalladr as “quite scary stuff about immigration, and especially about Turkey.” This was misinformation that Cadwalladr was familiar with — the lie that Turkey was going to join the EU, accompanied by the suggestion that its population of 76 million people would promptly emigrate to current member states.

She describes trying to find evidence of this content on Facebook: “There’s no archive of ads that people see, or what had been pushed into their news feeds. No trace of anything … This entire referendum took place in darkness because it took place on Facebook.” And Mark Zuckerburg has refused multiple requests from the British parliament to come and answer questions about these ad campaigns and the data used to create them, she says.

“What I and other journalists have uncovered is that multiple crimes took place during the referendum, and they took place on Facebook,” Cadwalladr says.

The amount of money you can spend on an election is limited by law in Britain, to prevent “buying” votes. It has been found that the Vote Leave campaign laundered £750,000 shortly before the referendum, which they spent on these online disinformation campaigns.

“This was the biggest electoral fraud in Britain for a hundred years, in a once-in-a-generation vote that hinged on just 1 percent of the electorate,” Cadwalladr says.

Cadwalladr embarked on a complex and painstaking investigation into the ad campaigns used in the referendum. After spending months tracking down an ex-employee, Christopher Wylie, she found that a company called Cambridge Analytica “had profiled people politically in order to understand their individual fears, to better target them with Facebook ads, and it did this by illicitly harvesting the profiles of 87 million people from Facebook.”

Despite legal threats from both Cambridge Analytica and Facebook, Cadwalladr and her colleagues went public with their findings, publishing them in the Observer.

“Facebook: you were on the wrong side of history in that,” Cadwalladr says. “And you are on the wrong side of history in this. In refusing to give us the answers that we need. And that is why I am here. To address you directly. The gods of Silicon Valley; Mark Zuckerberg and Sheryl Sandberg and Larry Page and Sergey Brin and Jack Dorsey, and your employees and your investors, too … We are what happens to a western democracy when a hundred years of electoral laws are disrupted by technology … What the Brexit vote demonstrates is that liberal democracy is broken, and you broke it.”

Cadwalladr offers a challenge to tech companies: “It is not about left or right, or Leave or Remain, or Trump or not. It’s about whether it’s actually possible to have a free and fair election ever again. As it stands, I don’t think it is. And so my question to you is: Is this what you want? Is this how you want history to remember you? As the handmaidens to authoritarianism that is on the rise all across the world? You set out to connect people and you are refusing to acknowledge that the same technology is now driving us apart.”

And for everyone else, Cadwalladr has a call to action: “Democracy is not guaranteed, and it is not inevitable. And we have to fight. And we have to win. And we cannot let these tech companies have this unchecked power. It’s up to us: you, me and all of us. We are the ones who have to take back control.”