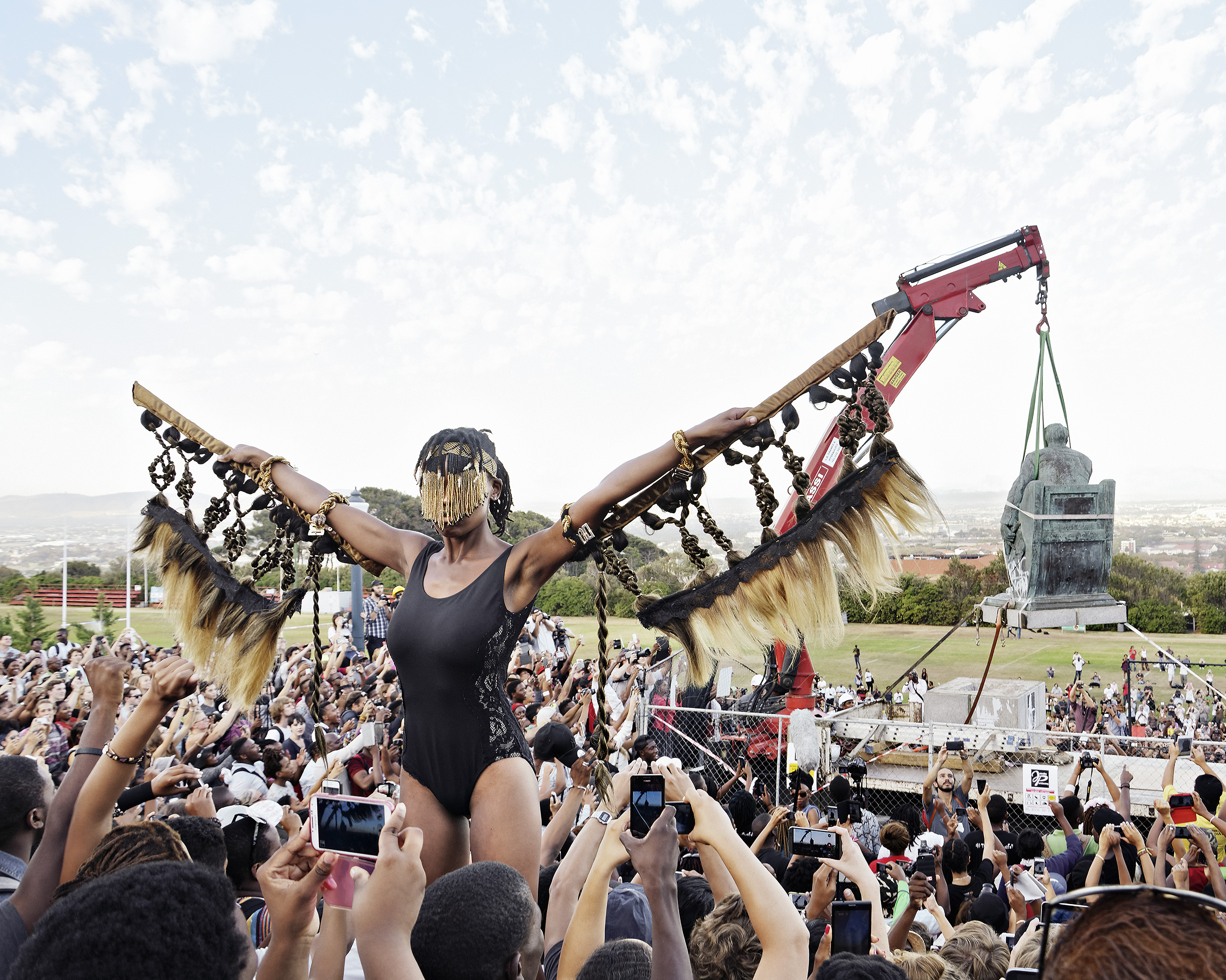 Standing for four hours on a platform in the scorching sun, Sethembile Msezane embodied the bird spirit of Chapungu, raising and lowering her wings, as a statue of Cecil Rhodes was lifted by crane off its own platform behind her. The work is based in her research and scholarship, while the imagery of Chapungu first came to her in a dream. “By the time I came down, I was shaking and experiencing sunstroke. But I also felt a burst of life inside.”

Sethembile Msezane’s sculptures are not made of clay, granite or marble. She is the sculpture, as you will see in her talk — which you can watch right now before you read this Q&A. We’ll wait.

The fragility of the medium combined with the power of her messages make for performances that literally stop people in their tracks and elicit strong reactions. I ask Msezane about what goes into her productions and the practical realities of physically embodying her artwork that is a powerful and often uncomfortable commentary on the reality of being a black woman in post-apartheid South Africa.

That was a great and moving talk — congratulations! How do you feel?

Thank you! It’s been a positively overwhelming experience. To have an idea, allow it to manifest through various experiments and for other people to identify with it even if it’s years later after its inception is encouraging.

The crowd at TED conferences is a fairly progressive one, but how would you describe the broader reception of your art, both on the site of your performance and off it?

Well, there’s always different responses to my work. Sometimes people focus on only scraping the surface of my practice by focusing on the female body, choosing to exoticise, sexualise or even moralise it. But then something interesting begins to happen when they start to ‘see’ the person inside the body in relation to symbols in the landscape and in dress. At times, their own insecurities become revealed to them. They start to comment on the society we live in and the effects of symbols such as statues living among us.

Putting your body out there as vessel for your messages is incredibly brave. Have you ever felt like you were in physical danger during any of your performances?

Yes, there’s always an anxiety just being a regular woman walking down the street. So when my body is standing on a plinth in public spaces, this is not a foreign feeling. Sometimes I’m surrounded by crowds, and there’s movement that could cause me to fall off. At times people touch my body, which of course is not welcome. This speaks to how we, particularly men, have been socialised to think they are entitled to women’s bodies.

I remember one time, however, when I was more scared for a colleague and friend of mine who was filming my performance The Charter. A man was passing by and noticed the performance. He started spewing out all kinds of hatred in relation to my body and the symbolic gestures being performed in that space. His hatred grew and he started displaying his prejudice and homophobia by insulting my friend. He didn’t physically harm us, but he used his words as a weapon, and that cut deep. 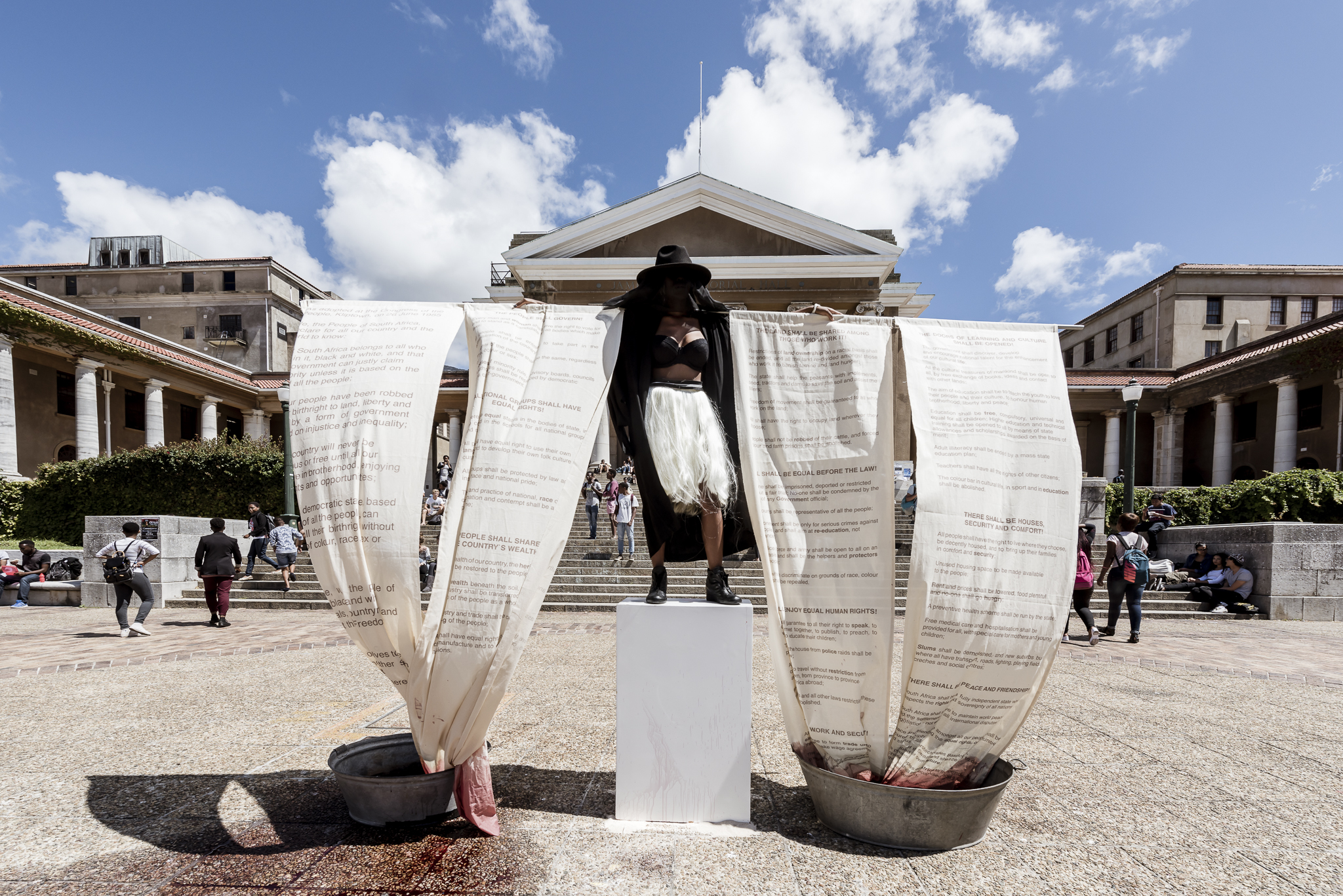 Could you describe what goes into each performance? Conceptualisation? Writing? Research? Staking out the location? Help with pictures and video?

My process is never constant; various circumstances come into play in formulating the performance.

I guess in the beginning I’d get fixated on an idea and start doing more research about it…online, books, films, magazines, music etc. Concurrently, I begin to source materials and costumes to construct wearable sculptures in my studio. In between sourcing materials, I make site visits, interview people and write my observations to formulate a solid concept.

I think now I realise not all of it was based solely on research — some of it was intuitive or came about in my dreams. I’d try connect with the figure I’d be embodying on the day of the performance. This happened at home in front of the mirror. This process would be carried out from the beginning of thinking about ‘her’ towards the very end on the day of the performance.

Which was the most difficult performance to enact?

Chapungu: The Day Rhodes Fell (2015) on the other hand was longer nearly 4 hours. Standing on 6-inch stilettos that long can’t be healthy. My toes were blue, they didn’t feel like my own. The plinth I was standing on was placed on a set of stairs, and people were standing around the plinth. The positioning was quite precarious.

It was scorching that day (I think it was 32 degrees celsius), and a lot of my body was exposed. I kept my arms outstretched about 10 minutes at a time and rested for about 5 minutes. I went between many states of consciousness being Chapungu; but also being myself, Sethembile, I was deeply in pain, fatigued, dehydrated and more. Meditating, remembering why I was there and allowing the spirit of Chapungu to be present kept me going. By the time I came down, I was shaking and experiencing sunstroke. But I also felt a burst of life inside. 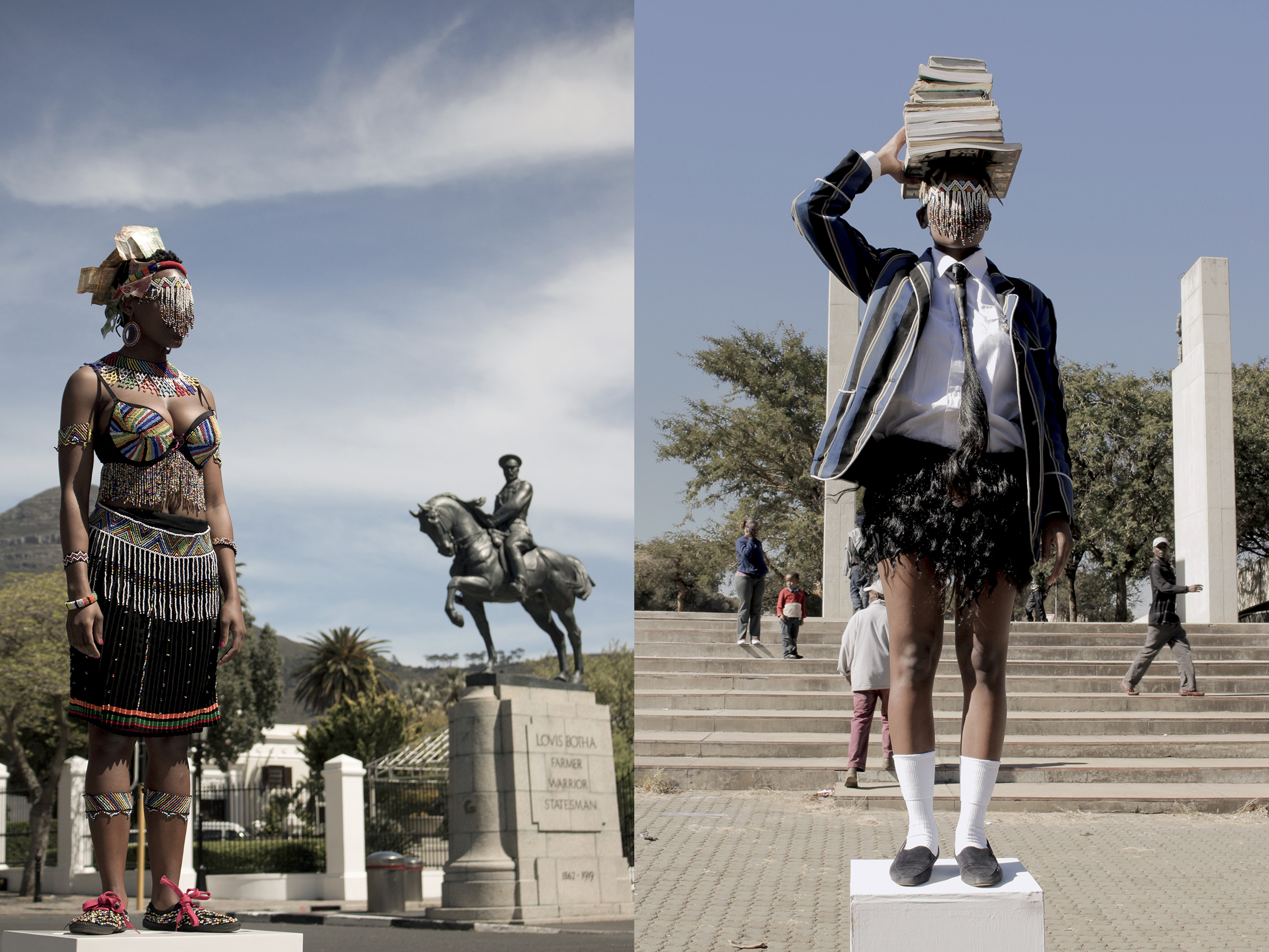 For Untitled (Heritage Day) in 2014, Sethembile created a character based on her own Zulu traditions, and posed silently in front of a statue of Louis Botha, creating a rich dialogue between South Africa’s colonial, apartheid-era history and her own. For Untitled (Youth Day) 2014, at right, she stood for just over an hour with books stacked on her head, her face masked.

Which performance has affected you the most?

That’s like asking which one of my children is my favourite haha. I can’t really say, they all have contributed to my thinking and where I am in my outlook and career right now. I’ve learned valuable lessons in each performance, because in essence they comment on the societies I’ve found myself in; these spaces and people can be complex. Ultimately, I learned more about being a woman in physical space (both public and private) but also within the spiritual realm, which is very present in my daily life.

What more can we look forward to from Sethembile?

I’m looking forward to the opening of Zeitz Museum of Contemporary Art Africa (MOCAA) this September, where select pieces of my work that are part of their collection will be showing. One of my favorite pieces, Signal Her Return I (2015–2016), a living sound installation with a sea of lit candles, an 18th-century bell and long braid of hair, will also be featuring. After that I’m headed to Finland for the ANTI Festival International Prize for Live Art award ceremony where I’m one of four nominees.

That’s as much as I’m willing to reveal for now. Keep following, you won’t be disappointed …