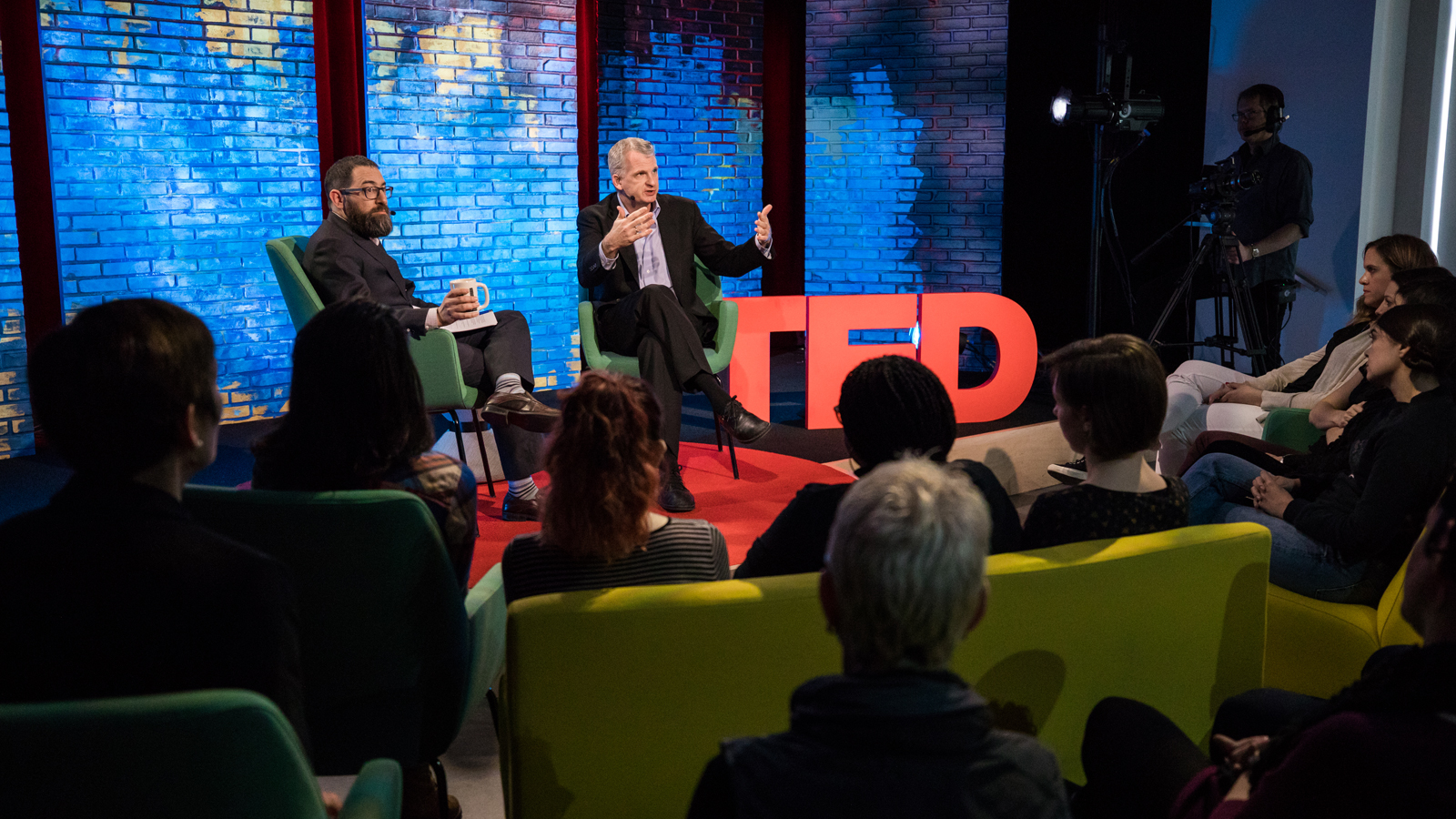 “Can we learn something from the past that helps us see more in the present?” asks Timothy Snyder, right, onstage with historian Rick Perlstein, during TED Dialogues, February 23, 2017, at TED’s offices in New York. Photo: Dian Lofton / TED

Timothy Snyder grew up in America, but as a historian of 20th-century Europe at Yale, he’s spent much of his adult life in, or thinking deeply about, Central and Eastern Europe. And what he sees there — especially in looking at the Europe of the 1920s, ’30s, and ’40s — is a pattern that may feel familiar to people who are watching the political scene in the United States right now, with its political polarization, targeting of ethnic groups, and movement away from globalism toward nationalism inside government.

In conversation with Rick Perlstein, himself a historian of conservatism, Snyder talks about what Americans in 2017 might learn from looking hard at Europe’s darkest decades. “What we should do,” he says, ”is learn from the way things don’t work out.”

Why look at the past? Because, Snyder says, America’s founding fathers explicitly wanted us to. “Our founding fathers enjoined us to study something very specific for reasons of citizenship: they implored us to study tyranny.” He goes on: “They were worried because democracy has always failed. Classical Greece, classical Rome, both turned into oligarchy and empire. They were concerned the American experiment would also turn into oligarchy and empire. They were very skeptical of themselves and other citizens, and they set up a system of checks and balances, where tyranny would be harder.”

America’s democracy has survived for more than 200 years, in part thanks to checks and balances. But also because the US was lucky at a time when Europe wasn’t: the 1930s.

In the era just before the 1930s, Snyder points out: “It was a time of globalization. Everyone was saying, history is over, liberalism is spreading, we’ll have prosperity for all.” And then social movements came along that “wiped out liberal democracy in most of Europe — and could have in the US. We had a 1930s that was unusual,” he says, and “we should realize how lucky we got.” The US’ escape from fascism wasn’t thanks to American exceptionalism, he argues, but thanks to a president who was, among other things, openly anti-fascist.

Just after the November 2016 election that brought Donald Trump to power, Snyder wrote a post on Facebook that drew on what he’d learned from the Europe of the 1920s–’40s and from more recent movements and revolutions in Central and Eastern Europe. His post began:

“Americans are no wiser than the Europeans who saw democracy yield to fascism, Nazism, or communism. Our one advantage is that we might learn from their experience. Now is a good time to do so.“

He distilled his insights into 20 points, soon to become the book On Tyranny: Twenty Lessons from the Twentieth Century. Onstage, Perlstein asks Snyder to review a couple of the most memorable points, starting with the first one: “Do not obey in advance.” What does that mean?

“It comes from Germany in the 1930s,” Snyder says. “Much of the way Hitler managed a regime change is, people figured out in advance what the leader wanted, and then they edged in that direction.And that’s the lubricant in regime change. As humans, we do this, we say: I’m going to adapt to this new situation of authority. If you just don’t do that, you can slow things down. Just don’t shift automatically because the situation shifts.”

Another point: “Practice corporeal politics.” This is a term Snyder borrowed from a Ukrainian activist — and by it, he means getting off the internet and connecting to people in real life. He describes a trip he took to the US Midwest to talk to voters: “The folks I was talking to were coming up from their basements and away from their Facebook feeds to talk to a real person, and it was uncomfortable! There is something strange about coming up from the internet and voting from someone who is really going to be president.”

Corporeal politics is about “getting away from the internet and exposing your brain to different stimuli. That changes you too, and gives you a sense that things are possible. It doesn’t distress you the way the internet will.”

Americans who are distressed about the rise of fake news might also take a lesson from the recent experiences of people in Europe, Snyder says. “All the fake news stuff, even down to the particular memes about protestors — that they’re thugs, that they’re paid — all of these were used in Ukraine in 2013, 2014, 2015.” In response, he reports, young people there made their own counter-fake news and created their own fact-checking sites. “When you decide you love the truth enough, you can make a difference,” he said.

Overall, Snyder stressed that American democracy shouldn’t be taken for granted; it, along with its institutions, needs to be supported and protected by our words and actions, no matter how small. As he writes in his book, “Life is political, not because the world cares about how you feel, but because the world reacts to what you do.”

This conversation is part of our TED Dialogues series, bringing context and insight to our current political situation. The next TED Dialogues conversation happens Wednesday, March 1, at 1pm Eastern, on Facebook Live. Sign up for email notifications about this series.