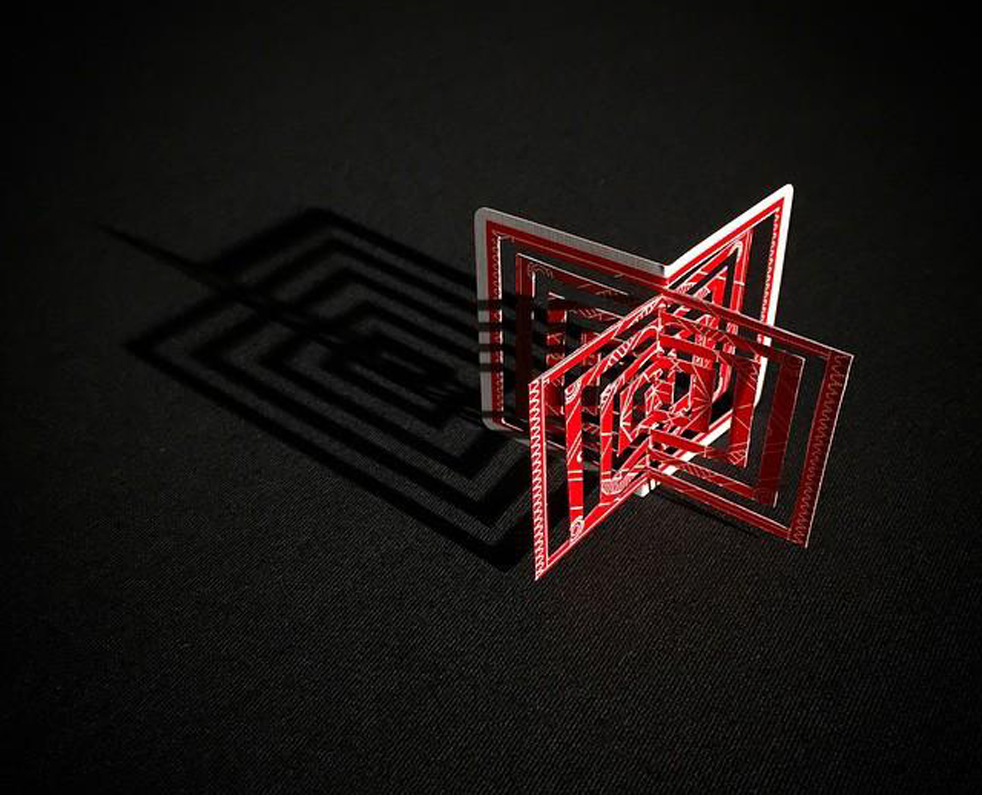 A playing card becomes a sculpture. And it has something to do with TED speaker J.J. Abrams. Image: @theory11

The members of the TED community have been very busy this week. Below, news briefs on what a few have been up to:

Who’ll pay for the Ebola vaccine? To end the Ebola epidemic, we need a vaccine — and a lot of it, fast. The challenge for drugmakers? That’s not a profitable business. Seth Berkley is in talks with GlaxoSmithKline and others to talk about who might foot the bill. Berkley heads the GAVI Alliance, a consortium backed by the Bill and Melinda Gates Foundation. (Watch Seth’s TED Talk, “The vaccine strategy,” and see the most recent talk from the Gates, “Why giving away our wealth has been the most satisfying thing we’ve done.”)

Simon Sinek shares his public speaking advice. Simon Sinek gave the third most-watched TED Talk of all time — but he is actually quite shy. He tells Entrepreneur.com that he worked very hard to fine-tune his on-stage presence and gives his 7 secrets for giving talks that inspire. Our favorite tip is #2: “Show up to give, not to take.” Sinek explains, “People are more likely to trust a giver — a speaker that gives them value, that teaches them something new, that inspires them — than a taker.” (Watch Simon’s latest TED Talk, “Why good leaders make you feel safe.” And stay tuned for much more advice in Chris Anderson’s book, Talk This Way! The Official TED Guide to Public Speaking.)

Shaka Senghor writes a letter to the man he shot. Shaka Senghor, who gave a powerful talk about his journey to redemption after going to prison for murder, recently shared an unusual piece on Medium.com: an apology to the man he shot. In the piece, he asks for forgiveness for blaming everyone but himself for his actions for so long. (Watch Shaka’s talk, “Why your worst deeds don’t define you.”)

A new J.J. Abrams mystery. J.J. Abrams was recently tagged in this mysterious tweet from online magic hub Theory 11. It features a beautifully intricate sculpture made from a single playing card. So, is this a real sculpture? Or just a very cool image? Since mystery is what Abrams lives for, we are excited to see where this leads. (Watch  J.J.’s talk, “The mystery box.”)

Computers make great language teachers. In a recent Q&A at Re/code’s Code/Mobile conference, computer scientist Luis von Ahn talked about Duolingo and how his language education startup might actually be an improvement on classroom learning. Why? Because it allows for the testing of different teaching methods and timelines, and can show which are the most effective. (See Luis’s TED Talk, “Massive-scale online collaboration,” and check out our recent piece, “How to learn a new language: 7 secrets from TED Translators.”)

A bowling ball races a feather. Brain Cox recently visited the NASA Space Power Facility in Ohio for the BBC. Here, in the world’s largest vacuum chamber, he shows what happens when a bowling ball and feather are dropped at the same time. The glee Cox shows during this experiment is priceless. (Watch Brian’s talk, “Why we need explorers.” And a bonus: check out the Little Hadron Collider!)

Adrianne Haslet-Davis wins first dance competition since the Boston Marathon bombing. Adrianne Haslet-Davis, who dances on a custom prosthetic leg made for the ballroom, has kept her promise of returning to the dance floor. She recently competed in the Commonwealth Classic, her first competition since the Boston Marathon bombing. And she won first place. (See Adrianne dance in the talk, “The new bionics that let us run, climb and dance.”)

A Stephen Hawking biopic. Stephen Hawking’s life becomes the stuff of Hollywood legend in the The Theory of Everything, which opens Friday, November 7. The film charts the love story between Hawking and fellow Cambridge student Jane Wilde, and brings us through Hawking’s devastating diagnosis. (Watch Stephen’s talk, “Questioning the universe.”)

Iraq Builders keeps on keeping on. Elaf Mohammed, social media coordinator for TEDxBaghdad, was featured in the photo book The Other Hundred, which shines a light on everyday people doing extraordinary things. He was selected for his work with the Iraq Builders, which corrals volunteers to help rebuild damaged homes. (Read our story about Iraq Builders, “In the middle of chaos, a bright side.”)

Superheroes can foster peace. TED Fellow Suleiman Bakhit recently spoke at the Oslo Freedom Forum, talking about how he created his superhero characters who combat stereotypes about the Arab world. (Read about Suleiman’s work in the story, “POW! Agent Hero.”

How news organizations build trust. Markham Nolan writes on Medium.com about the new ways in which news organizations need to think about trust. It’s no longer about just being “a trusted news source.” All stories are judged individually, and thus each and every click works to build an individuals’ perception of a source. (See Markham’s TED Talk, “How to separate fact and fiction online”)

And a look at war souvenirs. TED Fellow Amanullah Mojadidi has launched a new exhibit called Commodified at the Imperial War Museum in North Manchester, UK. This exhibit is all ‘war souvenirs,’ aka the strange phenomenon whereby wars become commodified. Think: a shirt that read, “My uncle went to Guantanamo and all I got was this lousy T-shirt.”