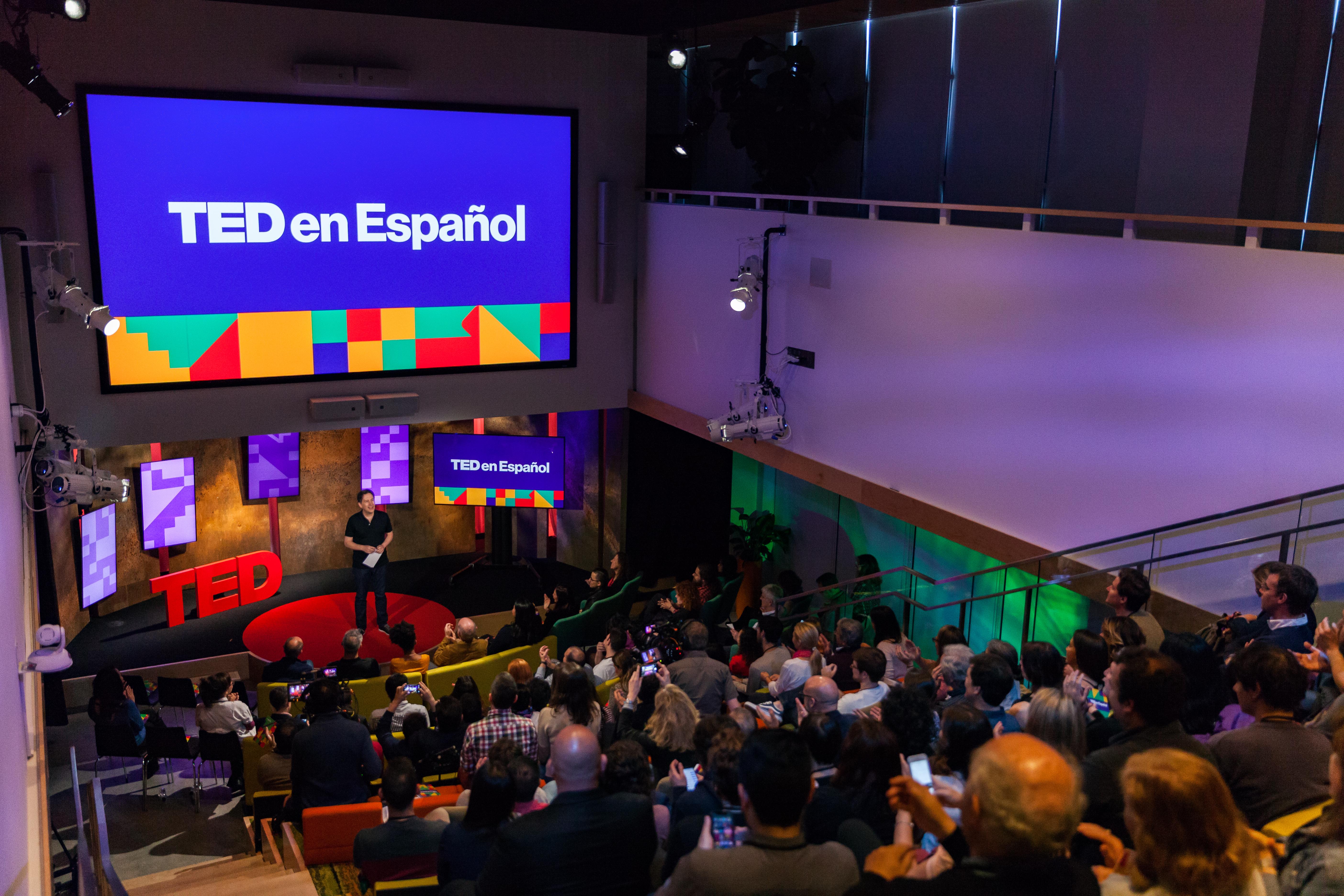 Should we automate democracy? “Is it just me, or are there other people here that are a little bit disappointed with democracy?” asks César A. Hidalgo. Like other concerned citizens, the MIT physics professor wants to make sure we have elected governments that truly represent our values and wishes. His solution: What if scientists could create an AI that votes for you? Hidalgo envisions a system in which each voter could teach her own AI how to think like her, using quizzes, reading lists and other types of data. So once you’ve trained your AI and validated a few of the decisions it makes for you, you could leave it on autopilot, voting and advocating for you … or you could choose to approve every decision it suggests. It’s easy to poke holes in his idea, but Hidalgo believes it’s worth trying out on a small scale. His bottom line: “Democracy has a very bad user interface. If you can improve the user interface, you might be able to use it more.” 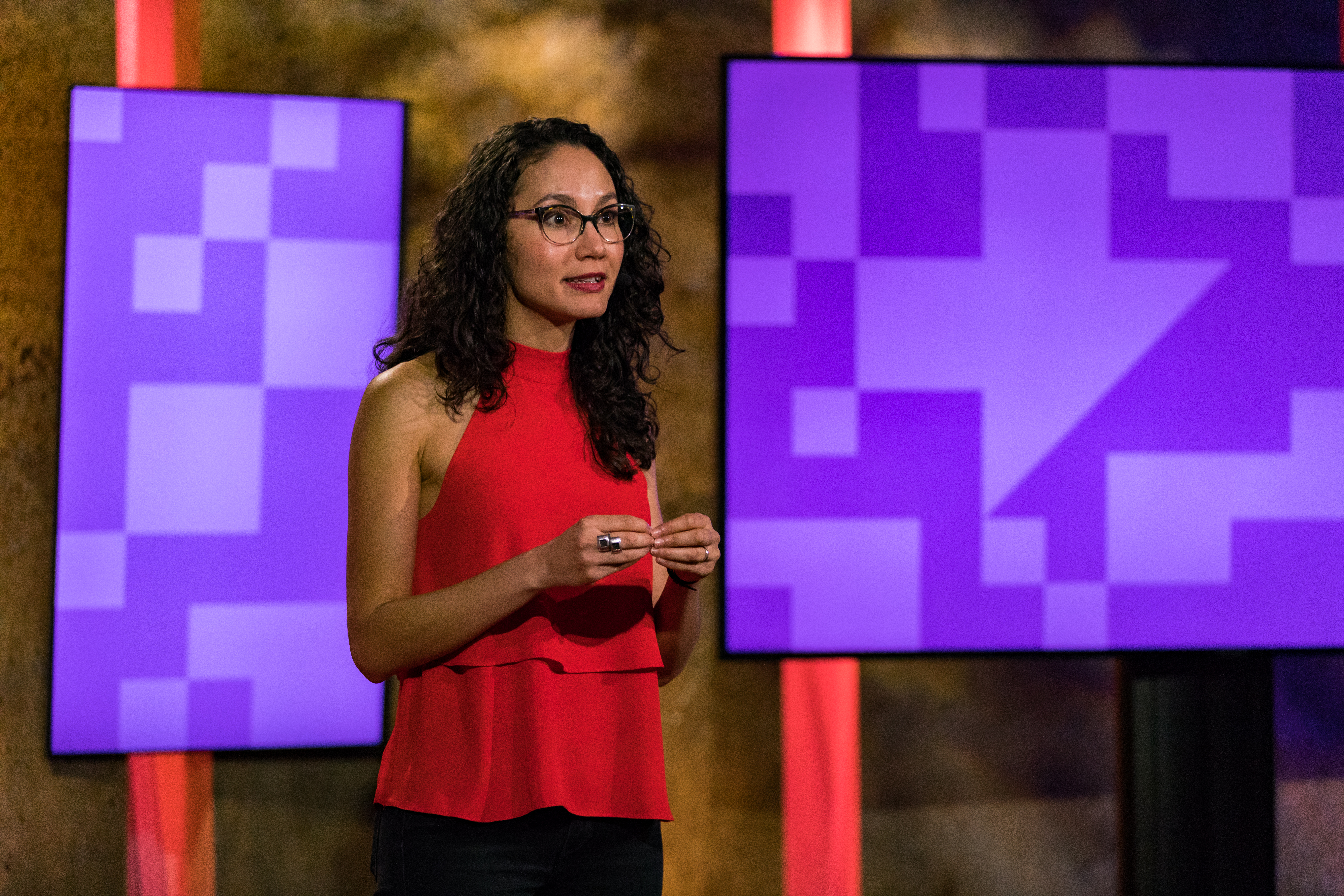 When the focus of failure shifts from what is lost to what is gained, we can all learn to “fail mindfully,” says Leticia Gasca. (Photo: Jasmina Tomic / TED)

How to fail mindfully. If your business failed in Ancient Greece, you’d have to stand in the town square with a basket over your head. Thankfully, we’ve come a long way — or have we? Failed-business owner Leticia Gasca doesn’t think so. Motivated by her own painful experience, she set out to create a way for others like her to convert the guilt and shame of a business venture gone bad into a catalyst for growth. Thus was born “Fuckup Nights” (FUN), a global movement and event series for sharing stories of professional failure, and The Failure Institute, a global research group that studies failure and its impact on people, businesses and communities. For Gasca, when the focus of failure shifts from what is lost to what is gained, we can all learn to “fail mindfully” and see endings as doorways to empathy, resilience and renewal.

From four countries to one stage. The pan-Latin-American musical ensemble LADAMA brought much more than just music to the TED en Español stage. Inviting the audience to dance with them, Venezuelan Maria Fernanda Gonzalez, Brazilian Lara Klaus, Colombian Daniela Serna and American Sara Lucas sing and dance to a medley of rhythms that range from South American to Caribbean-infused styles. Playing “Night Traveler” and “Porro Maracatu,” LADAMA transformed the stage into a place of music worth spreading. 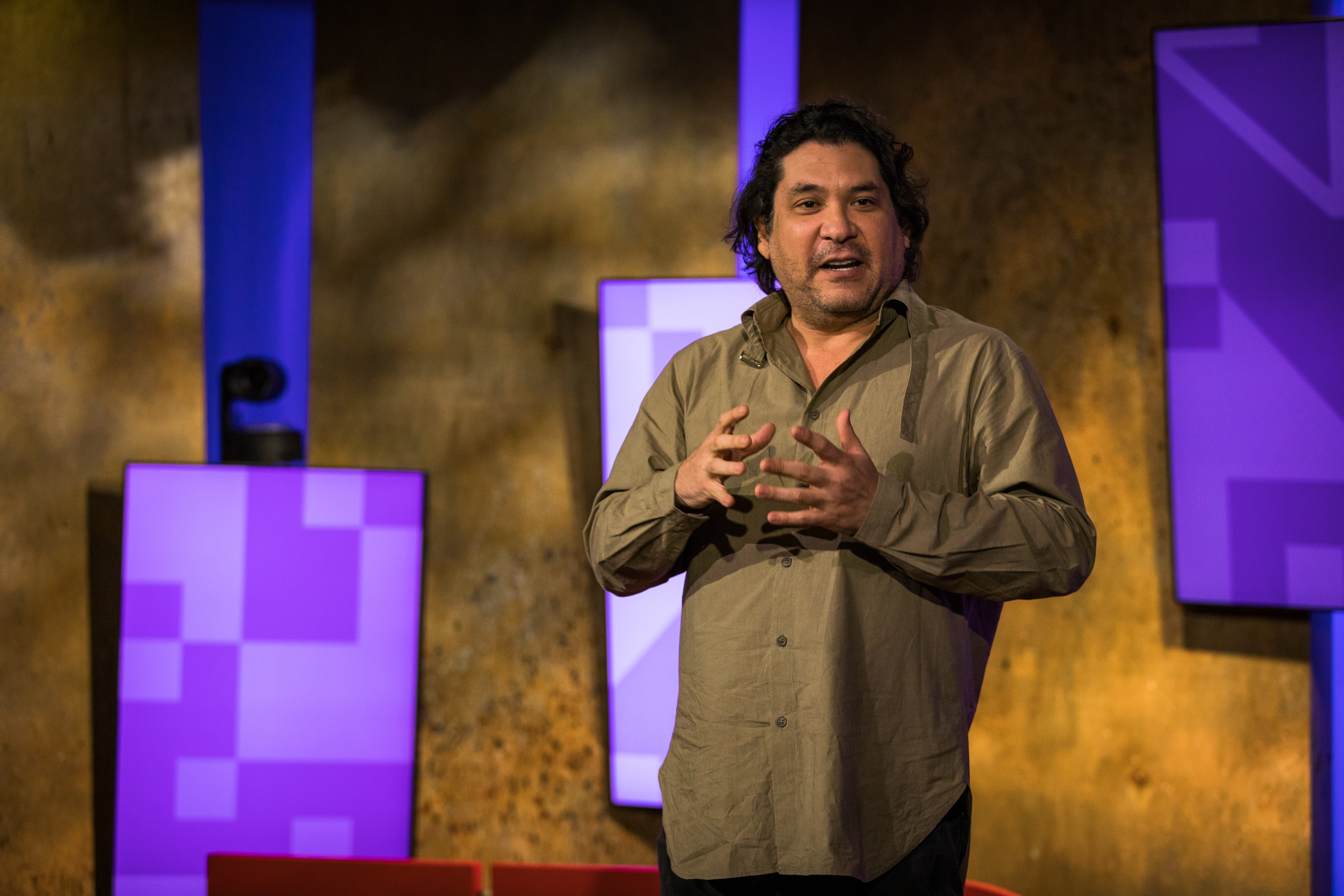 World change starts in your kitchen. In his pioneering work to bring Peruvian cuisine to the world, Gastón Acurio discovered the power that food has to change peoples’ lives. As ceviche started appearing in renowned restaurants worldwide, Gastón saw his home country of Peru begin to appreciate the diversity of its gastronomy and become proud of its own culture. But food hasn’t always been used to bring good to the world. With the industrial revolution and the rise of consumerism, “more people in the world are dying from obesity than hunger,” he notes, and many peoples’ lifestyles aren’t sustainable.  By interacting with and caring about the food we eat, Gastón says, we can change our priorities as individuals and change the industries that serve us. He doesn’t yet have all the answers on how to make this a systematic movement that politicians can get behind, but world-renowned cooks are already taking these ideas into their kitchens. He tells the stories of a restaurant in Peru that supports native people by sourcing ingredients from them, a famous chef in NYC who’s fighting against the use of monocultures and an emblematic restaurant in France that has barred meat from the menu. “Cooks worldwide are convinced that we cannot wait for others to make changes and that we must jump into action,” he says. But professional cooks can’t do it all. If we want real change to happen, Gastón urges, we need home cooking to be at the center of everything.

The interconnectedness of music and life. Chilean musical director Paolo Bortolameolli wraps his views on music within his memory of crying the very first time he listened to live classical music. Sharing the emotions music evoked in him, Bortolameolli presents music as a metaphor for life — full of the expected and the unexpected. He thinks that we listen to the same songs again and again because, as humans, we like to experience life from a standpoint of expectation and stability, and he simultaneously suggests that every time we listen to a musical piece, we enliven the music, imbuing it with the potential to be not just recognized but rediscovered.

We reap what we sow — let’s sow something different. Up until the mid-’80s, the average incomes in major Latin American countries were on par with those in Korea. But now, less than a generation later, Koreans earn two to three times more than their Latin American counterparts. How can that be? The difference, says futurist Juan Enriquez, lies in a national prioritization of brainpower — and in identifying, educating and celebrating the best minds. What if in Latin America we started selecting for academic excellence the way we would for an Olympic soccer team? If Latin American countries are to thrive in the era of technology and beyond, they should look to establish their own top universities rather than letting their brightest minds thirst for nourishment, competition and achievement — and find it elsewhere, in foreign lands. 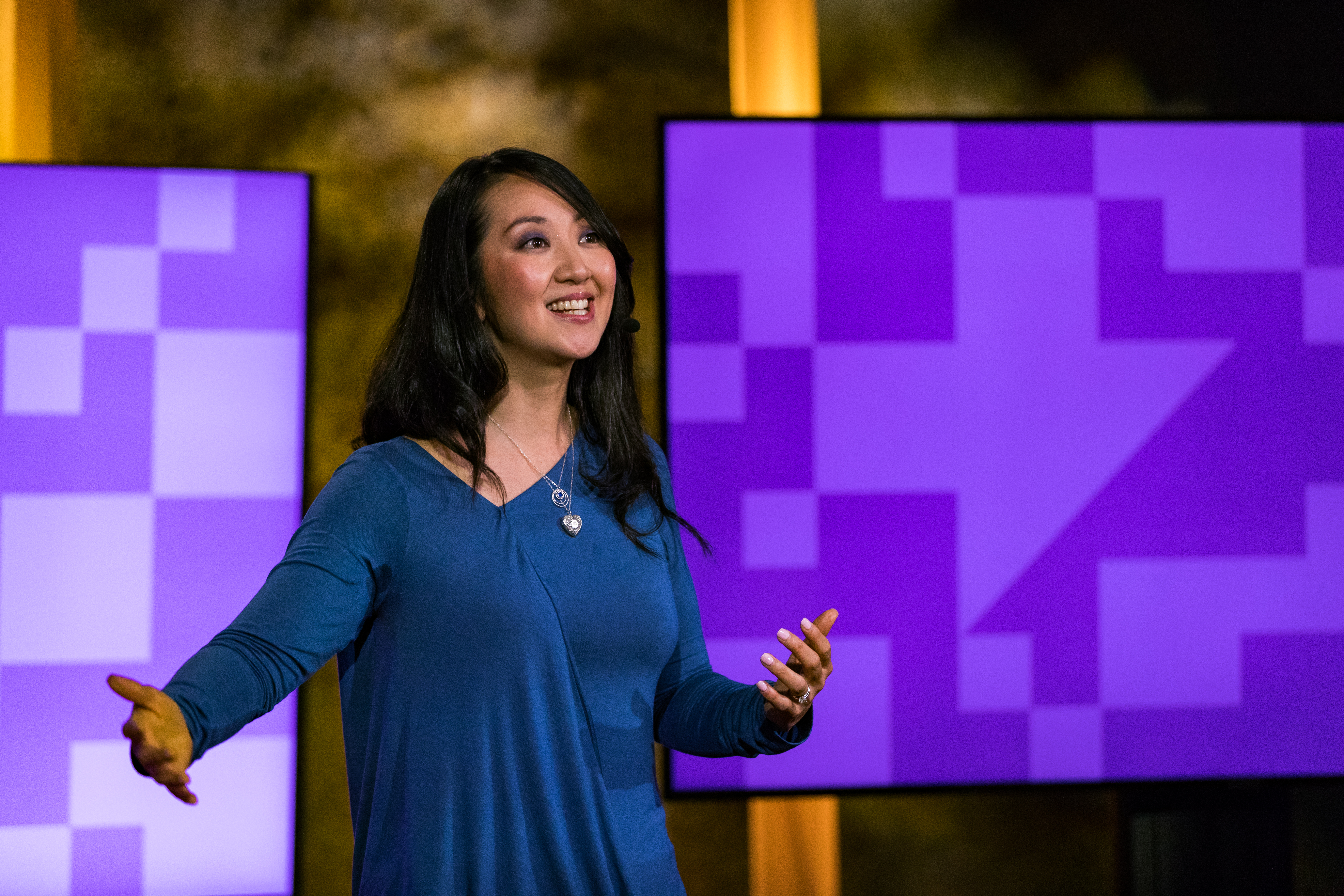 Rebeca Hwang shares her dream of a world where identities are used to bring people together, not alienate them. (Photo: Jasmina Tomic / TED)

Diversity is a superpower. Rebeca Hwang was born in Korea, raised in Argentina and educated in the United States. As someone who has spent a lifetime juggling various identities, Hwang can attest that having a blended background, while sometimes challenging, is actually a superpower. The venture capitalist shared how her fluency in many languages and cultures allows her to make connections with all kinds of people from around the globe. As the mother of two young children, Hwang hopes to pass this perspective on to her kids. She wants to teach them to embrace their unique backgrounds and to create a world where identities are used to bring people together, not alienate them. 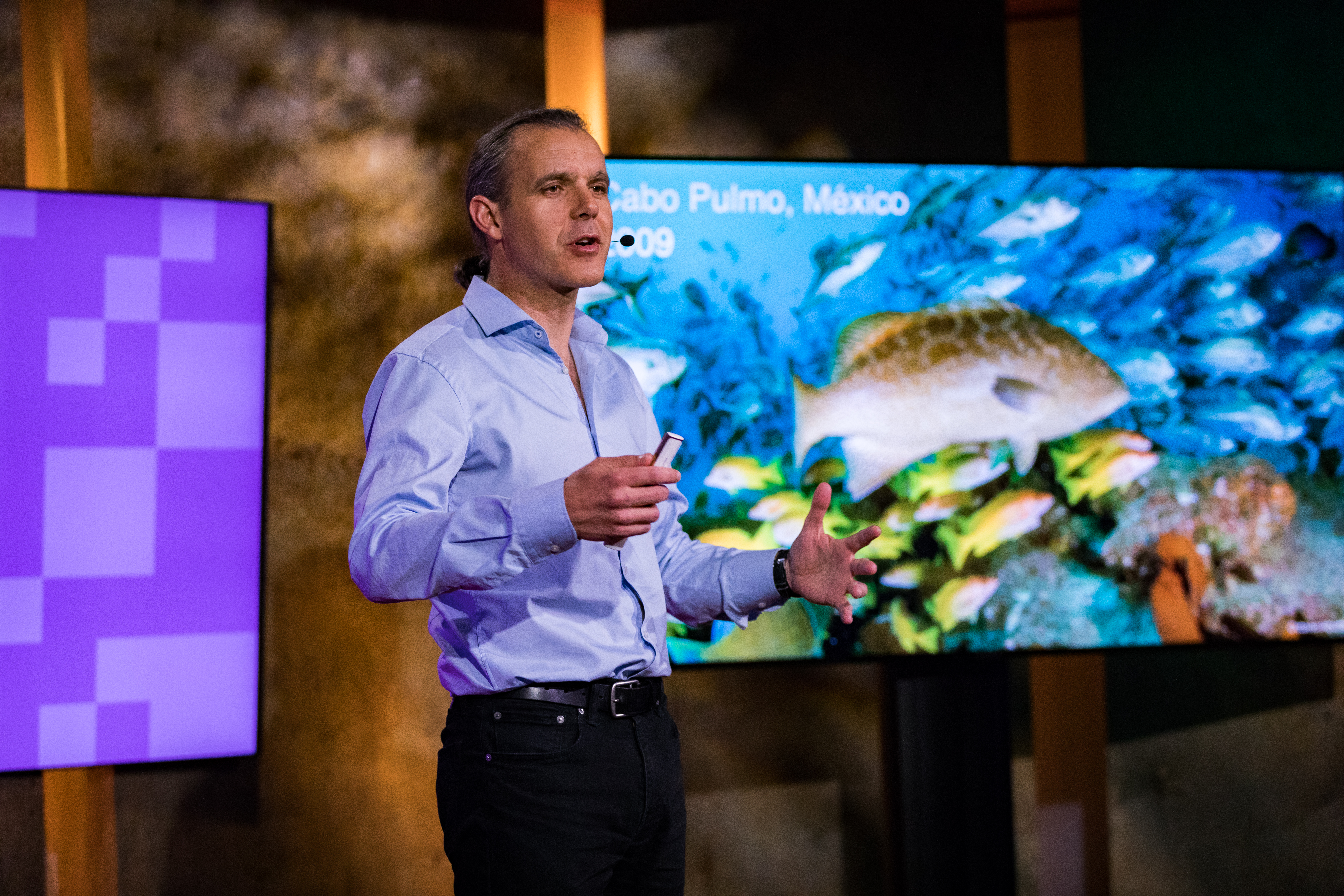 How we’ll save our oceans If you jumped in the ocean at any random spot, says Enric Sala, you’d have a 98 percent chance of diving into a dead zone — a barren landscape empty of large fish and other forms of marine life. As a marine ecologist and National Geographic Explorer-in-Residence, Sala has dedicated his life to surveying the world’s oceans. He proposes a radical solution to help protect the oceans by focusing on our high seas, advocating for the creation of a reserve that would include two-thirds of the world’s ocean. By safeguarding our high seas, Sala believes we will restore the ecological, economic and social benefits of the ocean — and ensure that when our grandchildren jump into any random spot in the sea, they’ll encounter an abundance of glorious marine life instead of empty space.

And to wrap it up … In an improvised rap performance with plenty of well-timed dance moves, psychologist and dance therapist César Silveyra closes the session with 15 of what he calls “nano-talks.” In a spectacular showdown of his skills, Silveyra ties together ideas from previous speakers at the event, including Enric Sala’s warnings about overfished oceans, Gastón Acurio’s Peruvian cooking revolution and even a shoutout for speaker Rebeca Hwang’s grandmother … all the while “feeling like Beyoncé.”