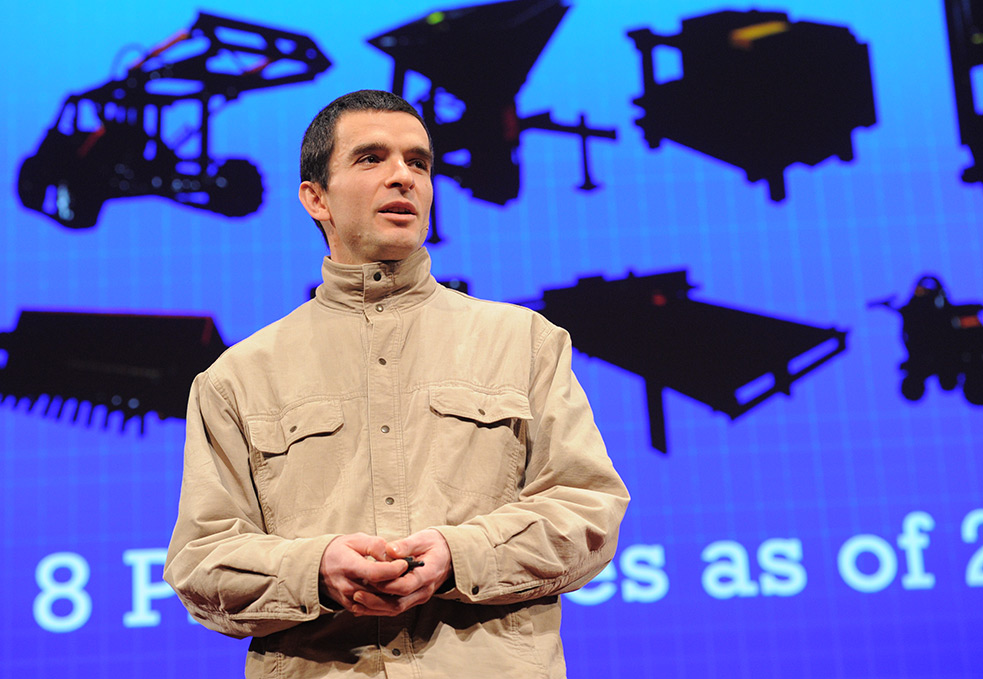 What if you could build a civilization from scratch, using tools that could also be built from scratch? In his talk “Open-sourced blueprints for civilization” at TED2011, Marcin Jakubowski introduced the Global Village Construction Set, open-source blueprints that would essentially allow anyone with a heap of scrap metal — and a few production tools — to make 50 machines covering all the needs of a basic civilization: agriculture, energy, transportation and production.

In the last two years, this TED Fellow has been working to make this radical idea a reality on Factor e Farm — a community based on 30 acres near Kansas City, Missouri. The TED Blog caught up with him to find out how the project is going, and to hear how his marriage to fellow Fellow (and open-source scholar) Catarina Mota (watch her talk, “Play with smart materials“) has brought domestic bliss into the construction equation.

It’s been a couple of years since you gave your talk on the Global Village Construction set. It generated a lot of excitement and about $1 million in funding. How has the project developed since then?

Machines that are ready for viral replication are the brick press, the hydraulic power unit and the soil pulverizer. The tractor needs some work. We’ve built a number of other prototypes — like the CNC torch table, a backhoe, an ironworker machine for cutting slabs of steel, a circuit mill and a trencher. We have an early prototype of a microcar and a 3D printer.

As we continue to prototype and develop more tools in the set, we are working to both develop a community and generate revenue, because our foundation funding has run out. To do this, we’ve experimented with a workshop model, where we teach interested people how to build the tools in a three-day immersion learning course. People paid a fee to take a weekend-long workshop, and we also sold the completed equipment. We’ve done a total of four microhouse workshops, one brick press workshop, one Power Cube workshop and one microcar workshop. Take the brick press, for example. It costs $5,000, we earned about $5,000 in tuition fees, and we sold the press for $10,000. It’s an education/production revenue model. The person who bought the brick press even came to the workshop and participated in the build. The general feedback was that people were really excited to build things that they didn’t think they could before the workshop. 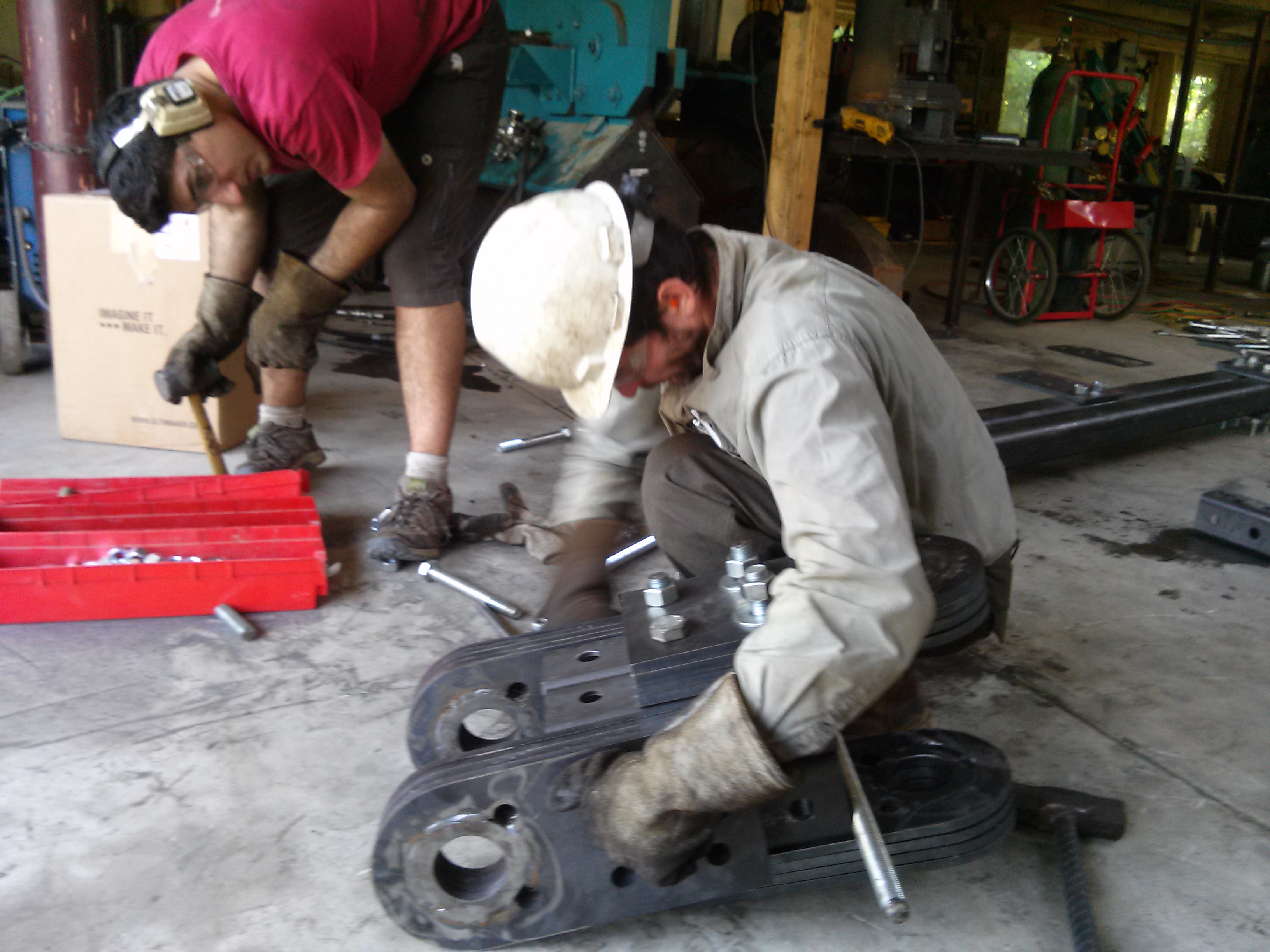 How has your perspective on this project changed since your talk?

I’m seeing that this work takes a long time to develop, so it’s more like a two-decade project than the two-year project I initially imagined. So I’ve revised my timeline and am planning for the long haul. I’ve realized that to make the Global Village Construction Set tools feasible, we need to explore what’s known as extreme manufacturing, which means rapid parallel building of the technologies. That means we have to get full infrastructure for rapid development in place — rapid prototyping, collaborative design — and a massive parallel development effort. The key to this is producing excellent, comprehensive, open documentation that anyone can access, and thus join the project rapidly. The workshop/funding model is a part of this plan.’

We have shown that we can build a brick press in a single day, for example. Now we’re focusing on building multiple machines and structures at the same time with different groups of people. Recently, we got that to the level of housing. We built a house in five days using compressed blocks from our Compressed Earth Block Press, plus standard modular construction techniques. Our next goal is to build a 3,000-square-foot electronics workshop in two days with 100 people.

In essence, what we’ll attempt is parallel group builds via workshops happening simultaneously. We are creating a process that’s social, educational and productive all at once. We just need to scale it and make it highly replicable. If we can hire people to teach, we could have a number of these revenue-generating workshops going on all at once. Meanwhile, I could carry on developing machines.

The missing link is people. That’s the perennial issue. We are in real need of diversely-skilled people who are both organizers and builders. However, we’ve had a couple of workshop attendees that later became workshop leaders. They had enough skill that they could actually pull it off. 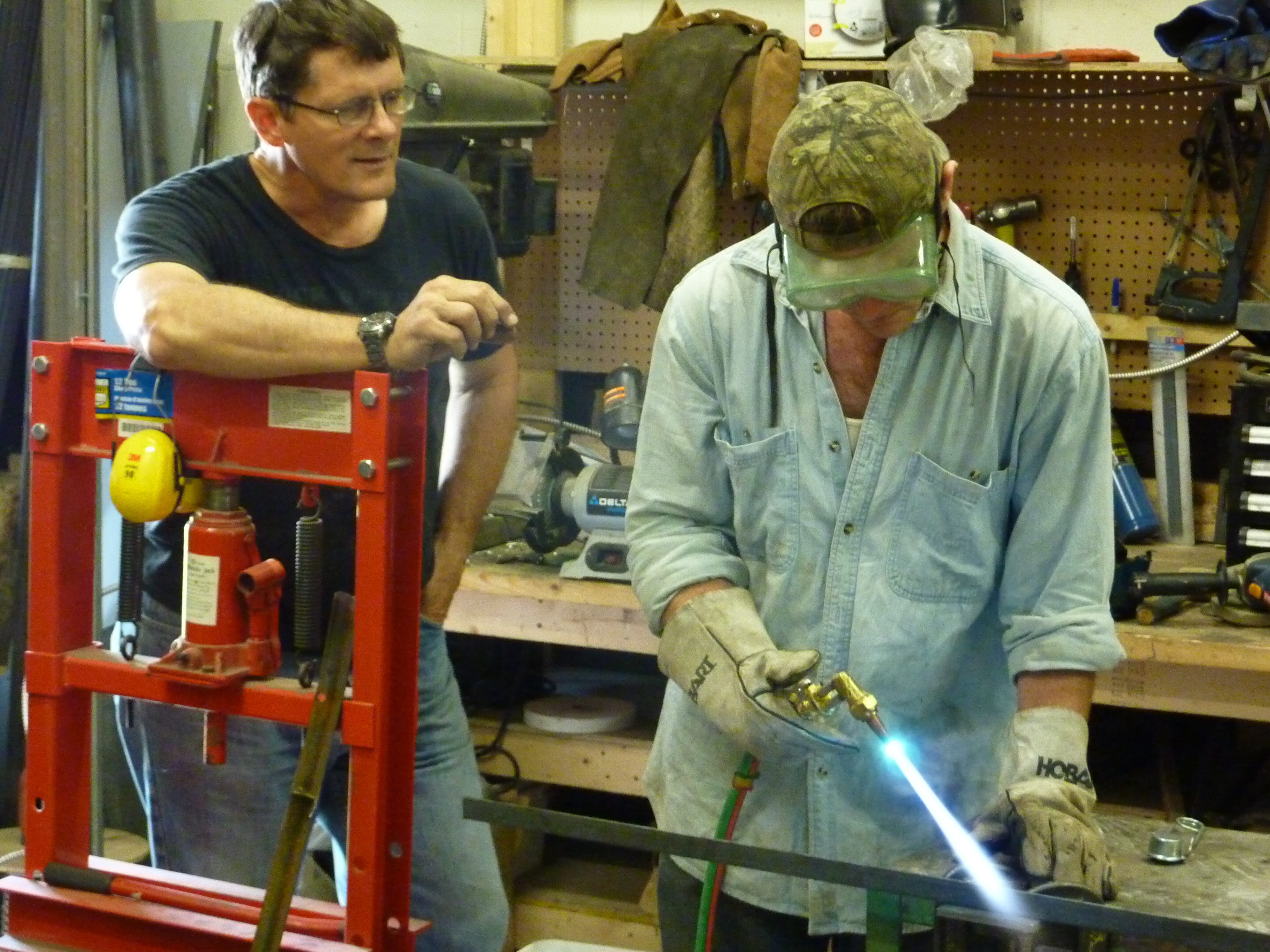 Workshop participants at Factor E Farm are given crash courses in manufacturing skills such as using a cutting torch. Photo: Open Source Ecology.

What kind of person is motivated to do this?

A maker, a creator, a DIY-type of person. People interested in self-sufficiency, regenerative development, as well as survivalists. A person who does it because it’s possible. Our goal is to bring the barriers way down to do this.

In fact, one new insight we’ve gained is that we’re able to lead unskilled teams of people through a process of a complex machine build. At the workshops, we had people who’d never welded before. And even myself — without prior experience in fabrication, I taught myself to do it. If you have the willingness, the technology is accessible. But you do need the open-source design blueprints and detailed instructions.

And then there are motivated entrepreneurs. One of our guys is now selling our Power Cubes, the hydraulic power units, as a business.

What can a Power Cube be used for outside the context of the Farm?

It’s got a 27-horsepower engine that produces hydraulic power — power in the form of hydraulic fluid that you connect to some other machine through hoses. So, for example, you can drive a tractor with it. I had a two-hour discussion with [TED Fellow and environmental engineer] Francis de los Reyes about how to use the Power Cube to power his latrine-emptying auger, for example, which I’m very excited about. We just shipped the cube to him. 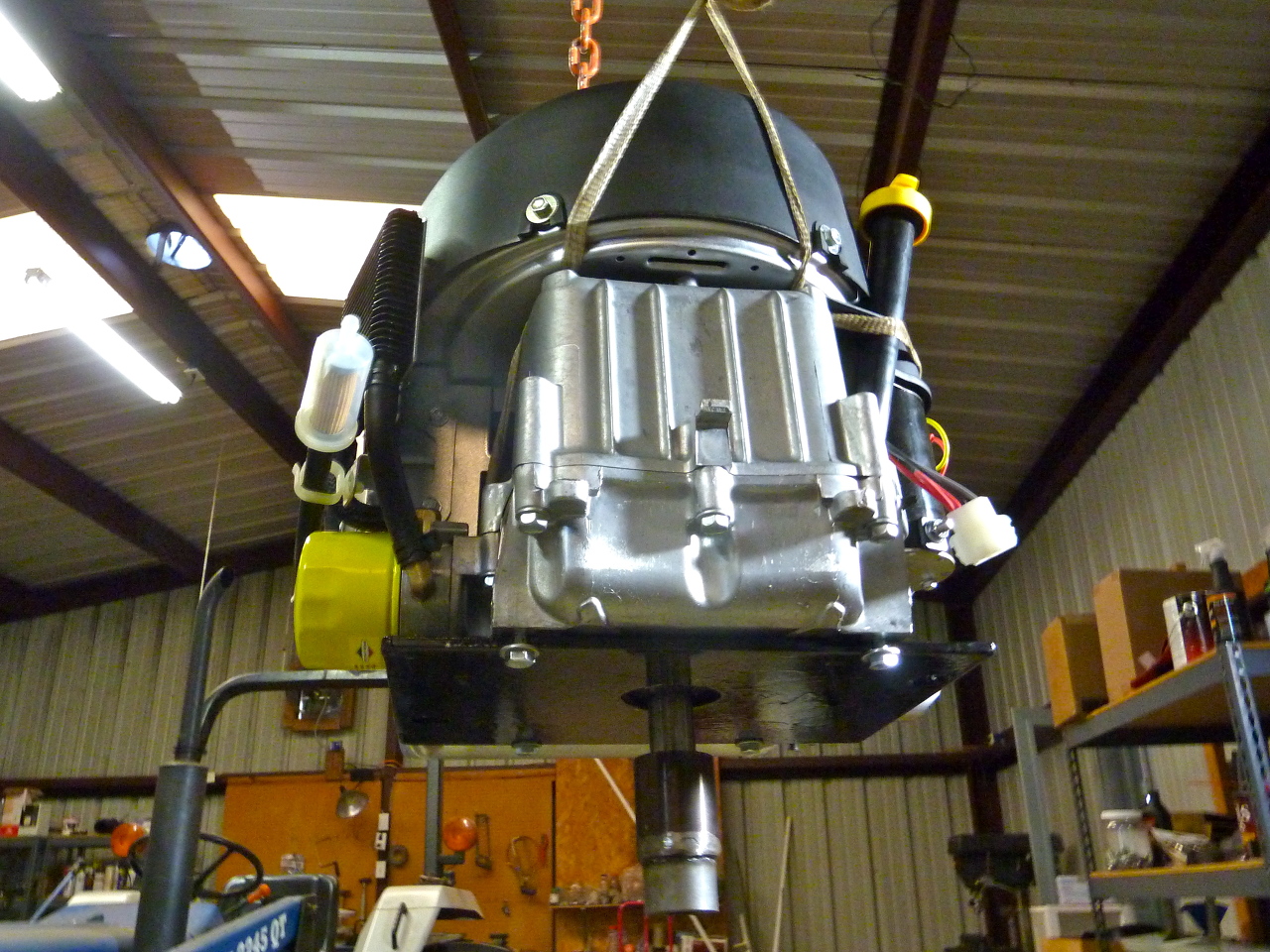 An engine module, for use with the Power Cube, which generates hydraulic power. Photo: Open Source Ecology

You and TED Fellow Catarina Mota met at TEDGlobal 2012 and married in December 2013. She’s now joined you at the Factor e Farm. How has that changed things for you?

Yes, she’s living out there, and we’re talking about creating a residency program for open-source development. We’ve got some crazy plans as far as how to take all this work to the next level.

You two are the prototype couple of the microhouse.

Yeah. As a single guy, I could tolerate a lot of stuff. But getting married pushed me to accelerate the development of family-friendly housing. Catarina and I now live in a comfortable, 1,300 square foot house that consists of several modules that we built through our Extreme Manufacturing training workshops. Our experimental design includes earth brick walls, a meeting room and in-floor heating. We are planning additions — such as a food- and heat-producing greenhouse.

The goal is a model, zero energy, state-of-art-house that will be affordable for everyone. Through integrated, open-source design, we aim to build a simple but advanced, replicable zero-energy house model that will cost 1/3 that of the standard stick-build home.

Testing the house firsthand gives us important feedback for future designs. When someone can hire Open Source Ecology — trained builders to build our high-performance house for them — it will put the house within reach of anyone, not just eco-elites or DIY builders who download our plans. The house could become our killer app. 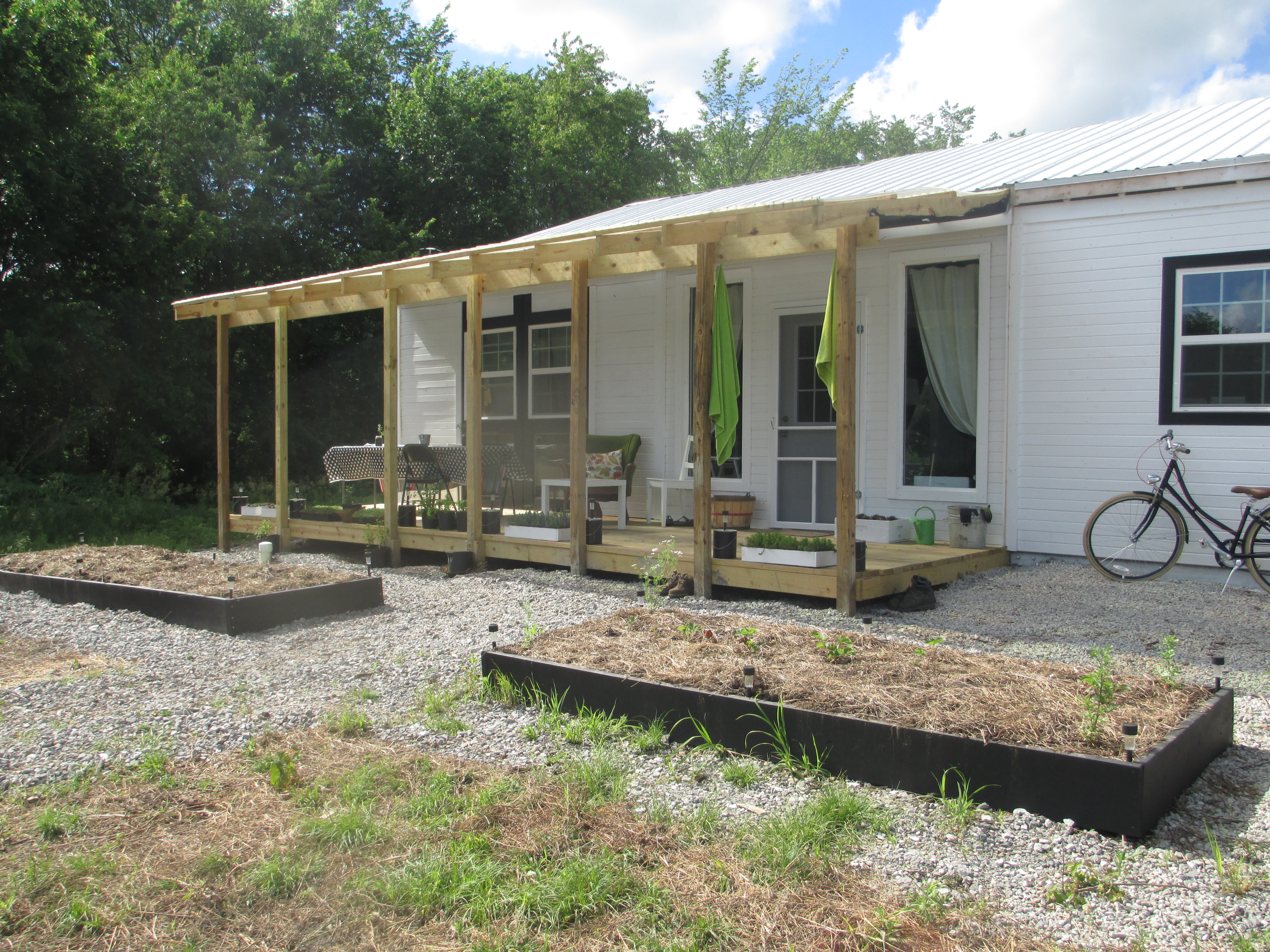 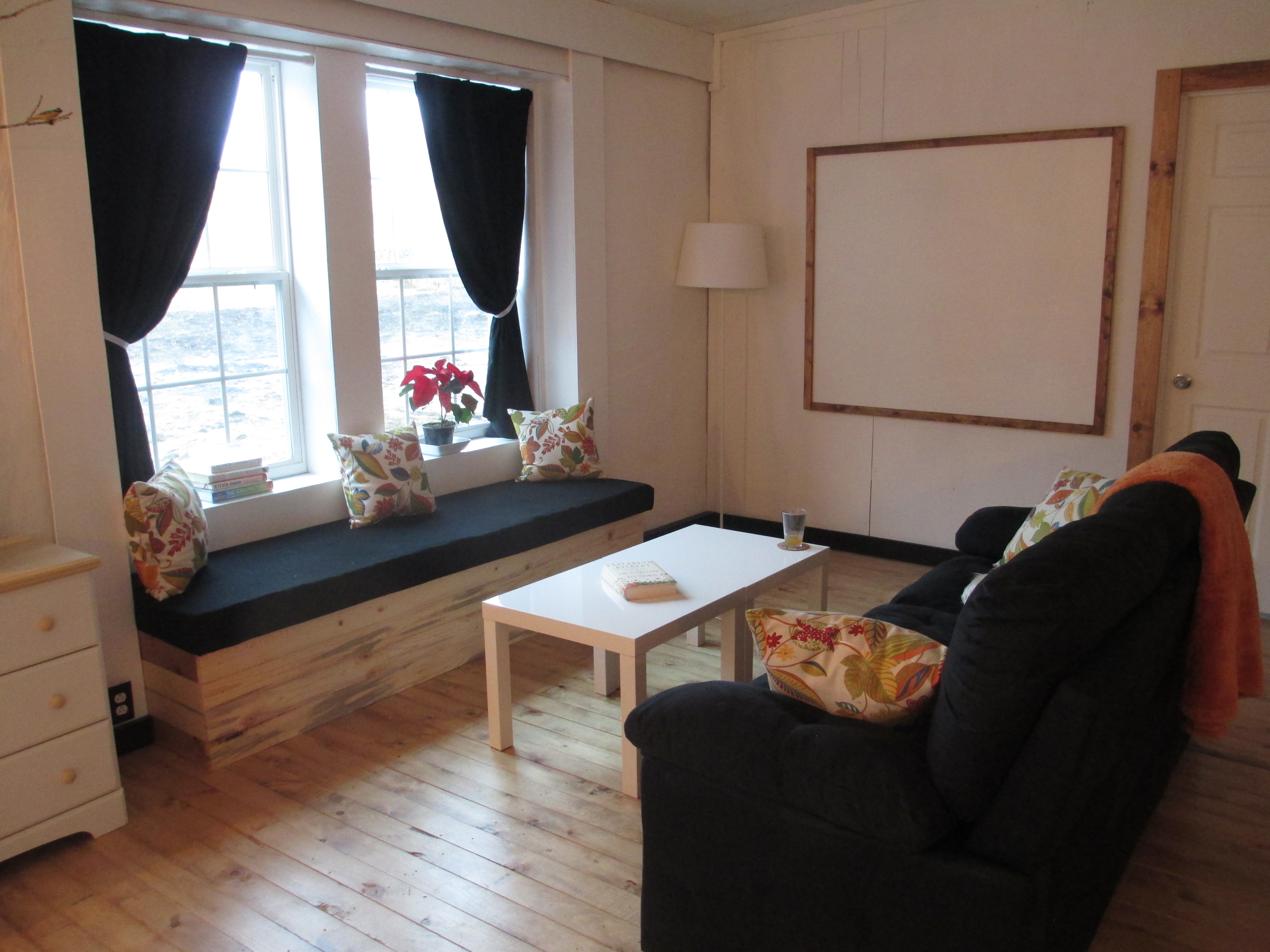 In the big picture, where do you see this all headed?

To me, there is huge news in the extreme manufacturing aspect. We’re taking the build time of every single one of our machines down to a single day — including the house, which is pretty remarkable. A lot of people don’t pay attention to that, but it’s critical when you talk about the economic significance of open-source appropriate technology. I’ve looked at some of the numbers, and I believe our tractor is a factor of several more efficient and lower cost than the biggest tractor manufacturers. They can’t build a tractor in a day.

But do you really believe open-source tractors could compete with the major manufacturers?

Absolutely. If you can deliver lower cost and equivalent performance — while addressing lifetime design — it’s absolutely going to do that. I think it’s a matter of time before modular design, which means the end of the throwaway society, has a significant presence across all sectors of production. This is starting to happen with modular phones such as Project Ara by Google. We’re doing this for heavy machinery.

I’m envisioning a new model of open-source, social production as the next industrial revolution. People are hungry for meaning and authenticity in today’s world. Part of such meaning comes only from seizing one’s raw productive power. Picture this: you go for a weekend workshop with your friends, and you build a thing — like a car — for yourself, because you’ve got the blueprints, advanced tools, and guidance.

Right now people might say, “I’m not going to build my own car! That’s insane!” But I think this is inevitable as tools of production are becoming more advanced and accessible. Manufacturing will be much more hands-on in the future. Small-scale distributed production — and efficient manufacturing at the quantity of one — are big news that most people don’t believe is possible. Social production also happens to address such fundamental issues as sweatshop labor and wealth inequality. 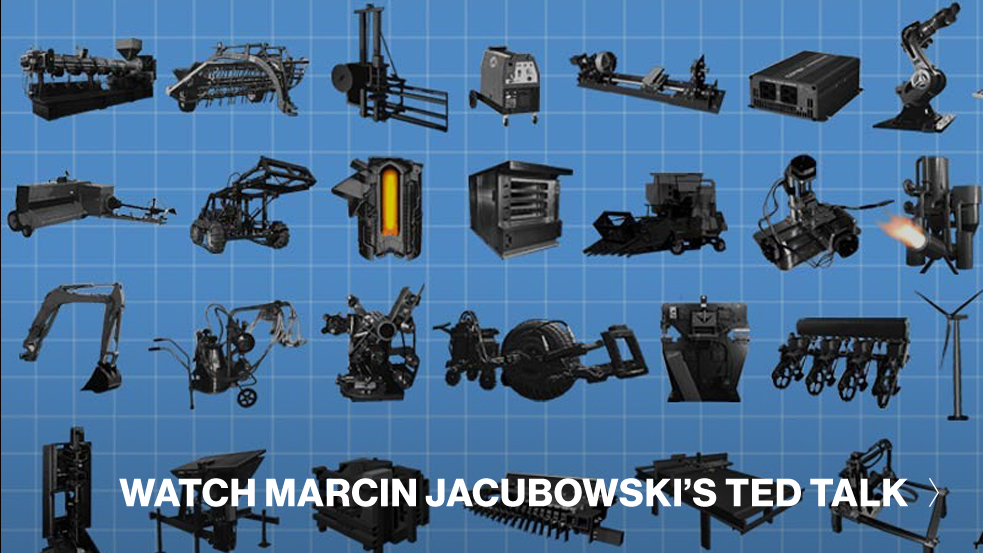