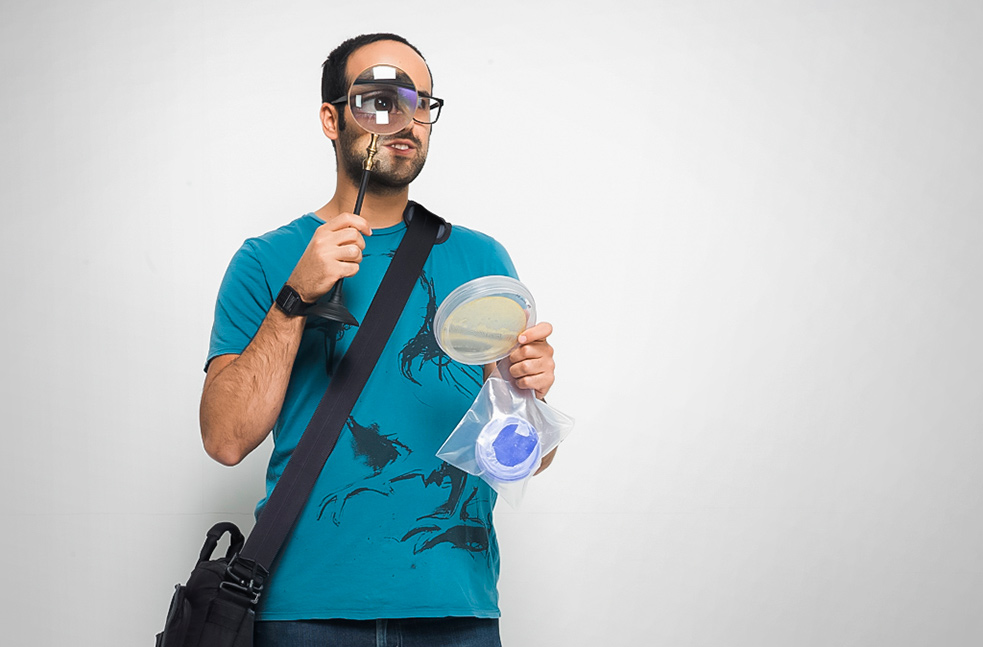 Did you know that bacteria can be programmed as though they were computers? Bioengineer and artist Tal Danino is working out how to instruct bacteria to enter cancerous tumors — where it can detect and treat the disease noninvasively. And when Danino isn’t tinkering with bacteria’s healing potential, he makes artwork with it.

With Danino’s TED talk posted just yesterday, he tells the TED Blog more about bacteria and how the artistic process drives his scientific research.

Tell us about your work in studying and programming bacteria.

There are two really interesting aspects to this. The first is that there’s this entire universe of bacteria inside of you, and in the last five to ten years, there’s been a revolution in figuring out what your microbiome does. It’s a really big part of your identity as well as a part of how you respond to and digest foods, how you develop certain diseases, allergies, and so on. Historically, we’ve thought of bacteria in a negative light and have and worked to maintain sterile environments. Now a lot of the recent research suggests we’ve been too sterile — and that disorders such as allergies, diabetes and obesity are connected to our microbiome. We’ve realized that basically the bacteria in our bodies are usually good, and that they’re a very important part of our health.

Do we know exactly why bacteria are so important to our health?

We don’t yet. We know a lot, and every week we find out a new fact. For example, we now know that the way that you were delivered when you were born — whether it was by caesarian section or traditionally — affects frequency of allergies, or that if you take antibiotics often in the early years of your life it can affect health processes down the road, such as development of asthma. If you grew up with a dog, for example, studies have shown you are less likely to develop allergies or asthma, because dogs can spread bacteria around that develop the immune system and help it to mature when you’re younger.

In my work, we are not only recognizing the importance of bacteria, but we are changing them. There’s this whole other revolution in which we are learning how to program life, similar to how we program computers.

Our technology has reached a point where we can write DNA like we would computer code. As a grad student, I started genetically programming bacteria to talk to each other, and to produce synchronized patterns. Then, as a postdoc, as this bacterial revolution was happening, I began to think about how we can program bacteria in our bodies. That’s when I started to develop bacteria to detect and treat cancer. 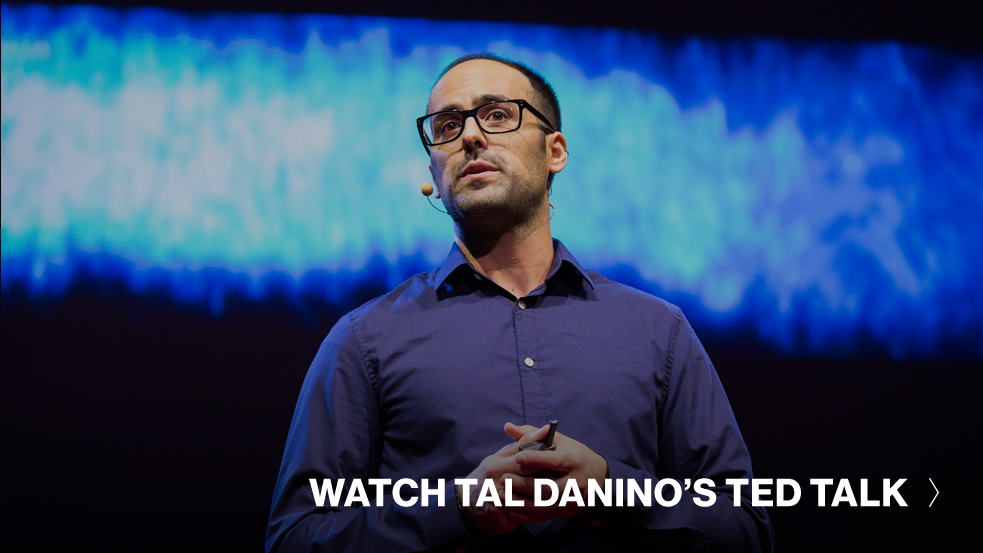 How does one program bacteria? What does this mean?

What we’re doing is modifying the DNA of bacteria. Without getting into technical detail, we have machines that can print out the letters of DNA, like A-T-G-C, and we’ve studied what sequences produce what function for quite some time. So for instance, there is a specific string of 500 letters or so that produces a purple-colored molecule. I print and cut-and-paste these DNA sequences, and put them into bacteria to instruct them to do certain things. In this case, I instruct the bacteria to make a purple molecule if they come into contact and grow within cancer cells, and the color is visible in urine, creating a noninvasive way to detect the disease.  We’ve also been using this technique to program bacteria to make molecules that treat cancer, causing the tumors to shrink or slow in growth. Researchers like me are thinking, “What can we program bacteria to do if they find a tumor?” We’ve been working on these ideas in mice with liver cancer.

What bacteria do you use to detect and treat cancer? Are there cancer-causing bacteria that you target?

Except for a few really specific cases, there’s not really a bacterium that causes cancer, so whatever bacteria we use simply need to be able to colonize the body’s tumors — we can use E. coli, Salmonella, and so on, bacteria that will thrive in anyone’s body. In fact, we’ve also been using probiotic bacteria, or ‘good’ bacteria — like those in yogurt  — for these tasks.  So imagine in the future eating a programmed probiotic that could detect and treat cancer, or even other diseases. That’s the goal of my research.

Above, watch “Supernova” — a video of bacteria growing a microfluidic device. Through a genetic program, Danino has created synchronized oscillations that you can see because of fluorescent proteins. Taken from Danino et al. Nature 2010

How do the programmed bacteria find the tumors?

If you deliver bacteria orally or via the blood, they land in all of the various organs in your body, as well as in tumors. Normally your immune system is really good at clearing out bacteria, but in cancerous tumors, there’s a weird area called the necrotic core where bacteria can hide because the immune system can’t get in there, and so the bacteria will just happily grow in these tumors.

This was something that people observed maybe 150 years ago, a random interesting fact. The story behind it was that a woman who had a tumor in her neck came into the hospital, and when she got a bacterial infection, her tumor stopped growing. It was the very first time it was observed that bacteria and tumors have this cool interaction.

But it wasn’t really considered safe to treat tumors with bacteria, and we didn’t know how to manipulate bacteria at the time. Today, we are able to program bacteria to be safe — so you won’t actually become infected with E. coli — and program them to do things they don’t normally do. 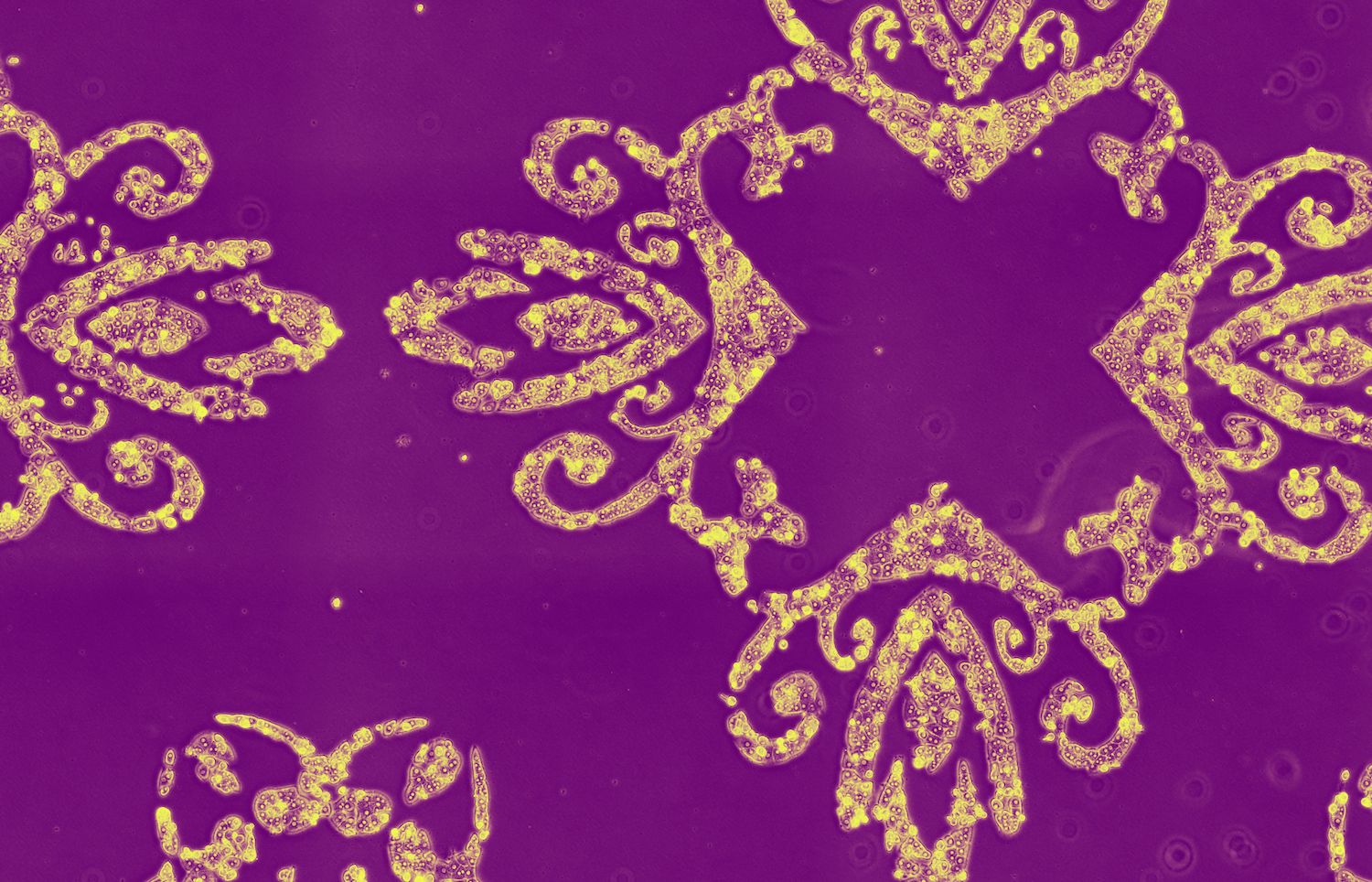 A pattern made of liver cells. From the Colonies series, a collaboration with Vik Muniz. Image: Vik Munoz

Why do you use bacteria to make art?

The art I do highlights the science I do in a very different way. I recently did a collaboration with an artist named Anicka Yi. It came out of a conversation where I was telling her about how there are 10 times more bacterial cells in the body than human cells — that’s interesting fact number one. Interesting fact number two is that there are 100 times more bacterial genes. So really, in terms of genetic material, we’re 1% human. The bacteria in your body are a really large and unique part of your identity.

Anicka was interested in doing a piece on how art and bacteria relate to feminism in expressing a woman as a female pathogen or a viral concept. In the project that evolved, she collected bacterial samples from 100 women, and I grew them on petri dishes for a month or two. The exhibit consisted of these petri dishes — bacterial portraits, in a way — as well as a giant petri dish that was 7 feet long, made entirely out of bacteria from all these women, spelling out the name of the show. As bacteria are also responsible for scents, you could smell it as you walked in. 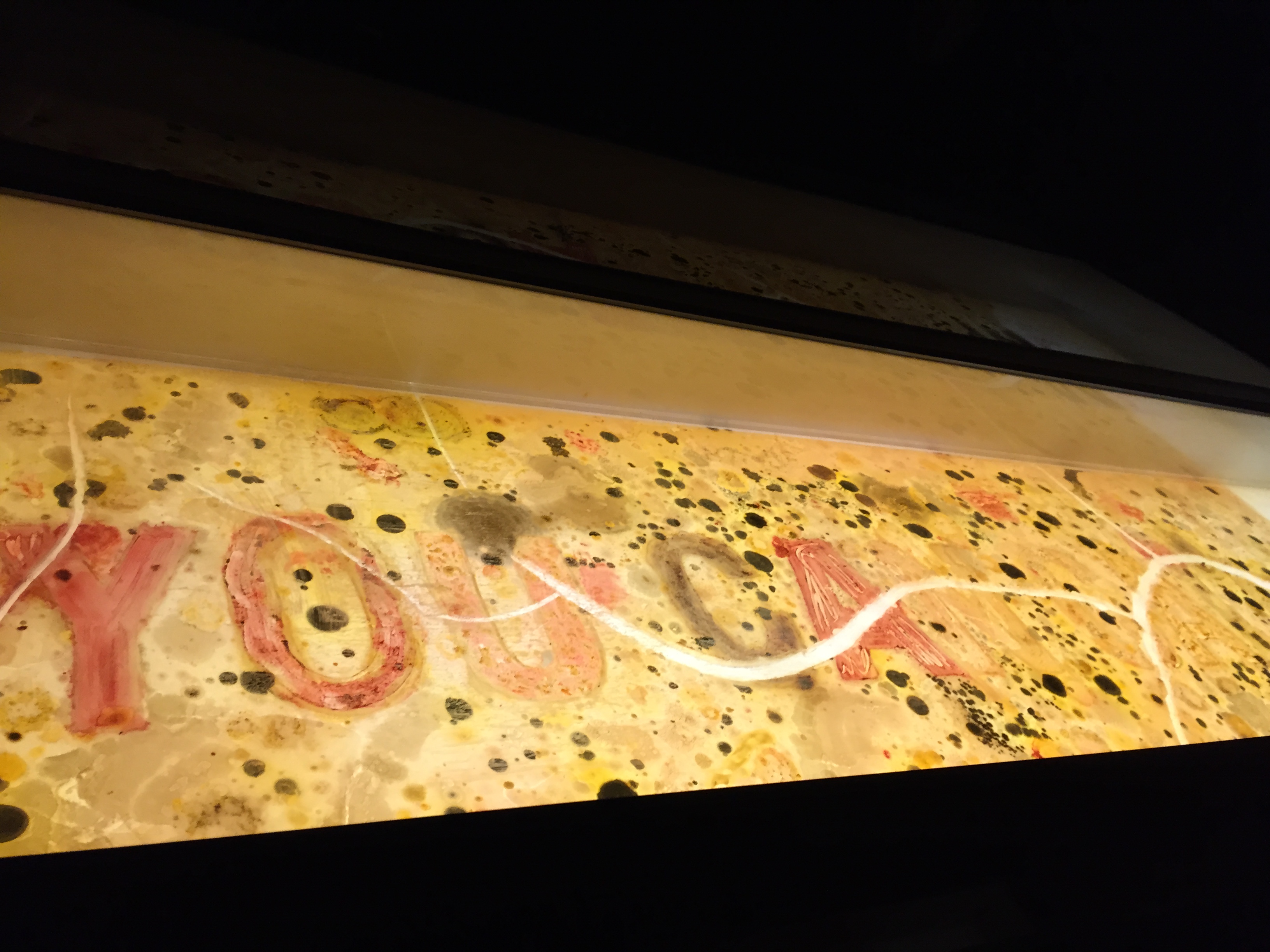 A 7-foot-long petri dish spelling out the name of exhibition You Can Call Me F, a collboration between Tal Danino and Anicka Yi. Photo: Tal Danino

To put bacteria in a petri dish and then culture it so that it can be smelled away from its body is a little disturbing.

Yeah, definitely. But it wasn’t as bad as you would expect. And really, that was part of the point: the bacteria in your body are just natural part of who you are. The show was also addressing paranoia around pathogens. It asks, “Are these bacteria that you’re growing from your body dangerous?”

Have you been an artist all your life?

My mom used to do a lot of art when we were kids, so I was always into it. But I really got interested in science art in graduate school, when I was doing a lot of microscopy. I would see such beautiful things in the microscope, and would make videos of them. Later I realized that for presentations, having a really good video or image takes ideas beyond abstract data, and makes the science a lot more convincing. When you see data and images for yourself, how do you argue with that? Art is also a form of expression for me, as a scientist. Generally, the voice of the scientist in media is limited to something along the lines of “Scientists have discovered X.”

In my work, science and art actually influence each other dramatically. I see these beautiful patterns while working in science, and then I think, “How does that pattern happen? I really want to study it.” In an art project I did with Vik Muniz, for example, I developed a whole new technique to program bacteria to form visual patterns.

Above, watch “Turning Living Cells into Art,” a video about the biological art collaboration between Tal Danino and artist Vik Muniz, in which striking images were produced from microscopic photos of bacteria, cells infected with viruses and cancer cells. Proceeds from artwork sales were donated to cancer research.

To me, they’re very similar, in a way. It’s a pretty open process, you choose a medium, you explore it, and you don’t really know why or what you’re doing all the time. Scientists don’t admit that, but it’s true. There’s an element of just messing around. Eventually you develop a story around the medium and why it’s important, and on the science side, you hammer down what it is that you’re doing.

So the artistic, creative process really affects my work in science. That’s something I don’t think people really understand yet. It’s important. If you look at cancer research, people have been doing the same thing for decades. How do you make something different? For me, a lot of the art has provided the vision for doing something different, doing something more creative that might now lead to a real cancer breakthrough.

Science likes to build on what came before in a linear fashion, so it seems like that would be a pretty hard sell.

That’s true, but at the same time when you look at the big scientific discoveries, they’re often serendipitous. “Where did this come from? We don’t know.” And what does it mean to really be creative, too? It’s not like this idea came out of nowhere — there’s usually a small series of elements that led you to this thing that you did just slightly differently than was done in the past.

I think you can see it either way. My impression is that artists embrace the creative approach and the idea of doing things differently and just going for it, and scientists don’t do this enough. They generally prefer to kind of look into the literature, as there’s been so much done in the past. That’s our process, and I think it’s great, but I really try to bring in a little bit more of the artistic mindset into the science. 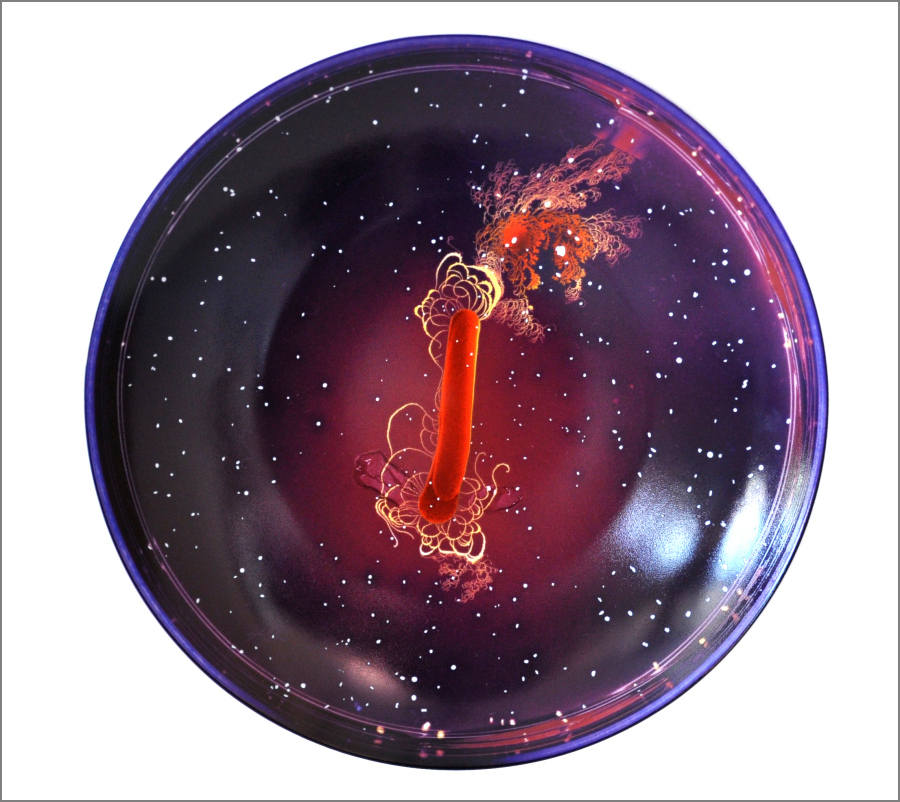