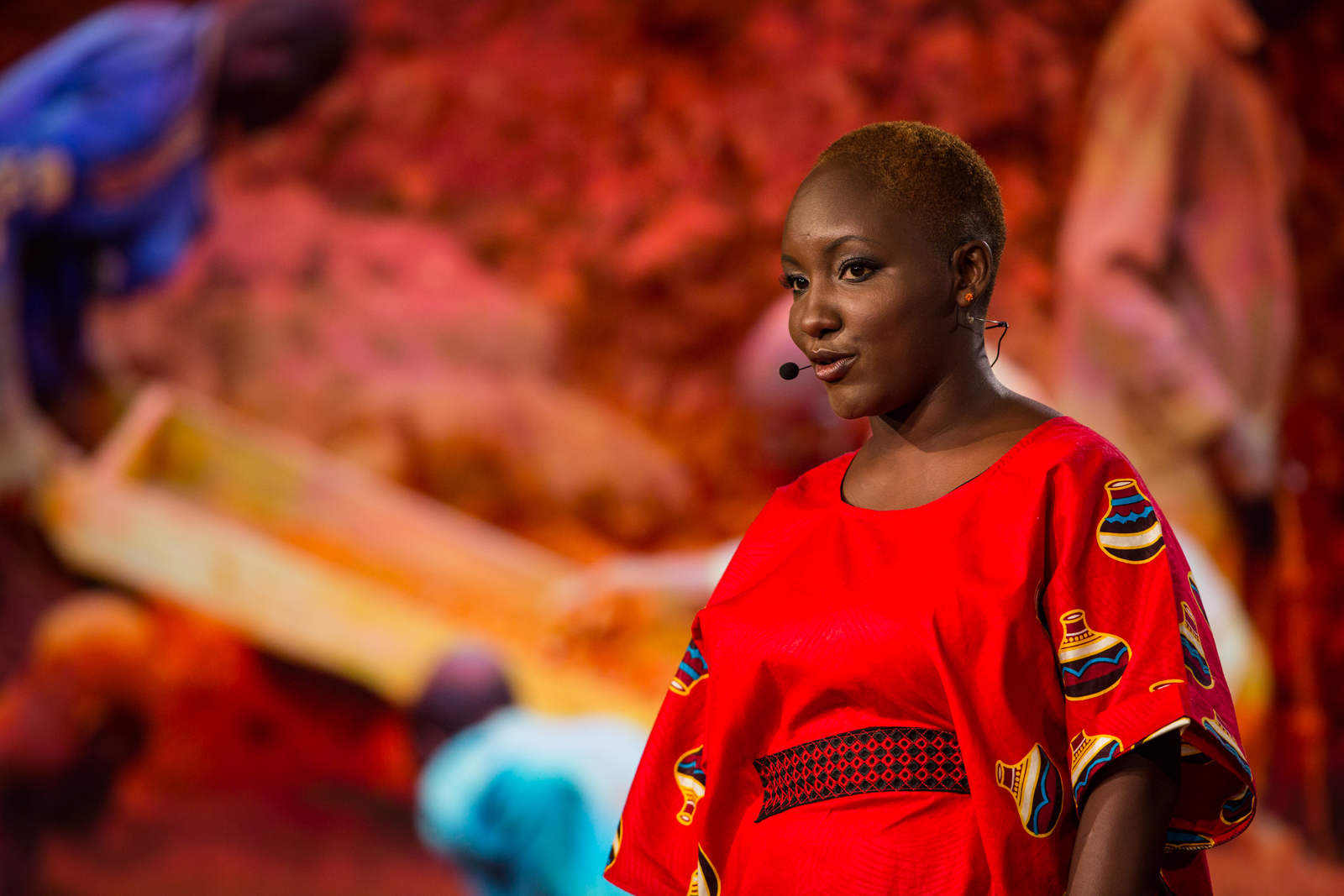 Majala Mlagui speaks on behalf of gem miners, who risk life and limb for the colored gems we wear — and are rarely paid a fair price. She spoke onstage at the TED Fellows session of TED2016, February 15-19, 2016. Photo: Ryan Lash / TED

Below, read short recaps of the talks in the first session of TED Fellows talks at TED2016, from a group of trailblazers just getting lift-off …

Beautiful music on the kulintang. Filipina-American composer Susie Ibarra plays the kulintang, a traditional gong from Southeast Asia. As she strikes each of the eight brass bells with her wooden drumsticks, it creates a melody that’s upbeat, bright and ethereal. She plays an original piece that contemplates the beautiful waters that surround the Philippines.

Ears, grown on apples. Andrew Pelling is a biohacker who uses nature as his hardware. His latest subject: encouraging living cells to grow into new organs and body parts. One challenge of growing body parts: what kind of scaffolding do they need as they grow, so they take the proper form? Pelling hit upon a simple, cheap, natural scaffolding: He asked his wife, who carves musical instruments, to carve an ear out of an apple. Then he grew human cells on the structure. “What I’m really curious about,” he says, “is if one day we can repair, rebuild and augment our own bodies with stuff we use in the kitchen.” His latest projects: using asparagus to guide neural growth after spinal injury, and creating open-source kits for low-cost biohacking projects like this — and keeping his eyes peeled for the unexpected inspiration that nature can provide. Read more in our profile of Andrew.

The next generation of Kyrgyz journalists. Bektour Iskender started the website Kloop — the fifth most popular site in Kyrgyzstan today. More than just a hub of daily news, it is also a school of investigative journalism for students born in the post-Soviet world. The site’s teenage reporters break stories regularly. After two teenage girls covered a session of Parliament, they started filming a car with illegal tinted windows. Officials tried to get them to stop, but they stood up for themselves: “The girls replied, ‘We have a right to film here. Can you let us finish our job?’ This short line reflects the result of the hard work we have been doing,” says Iskender. “These girls are such a great example of young people who know their rights and can fight for them.”

Sex and the African City. Nicole Amarteifio wanted to shift the conversation about Africa away from the recurring themes of war, poverty and famine, so she created a YouTube series based on Sex and the City, called “An African City.” It’s about five successful women raised in the West, but living in Ghana. “They are single, they are fabulous and they are dating,” she says. The point: to show the universality of the quest for love, and to poke holes in the single story of Africa. The show questions who controls the narrative of Ghana, and aims to stop the bickering about what is authentically African. “The pen is big enough for us all,” she says. “The battle is not with each other — at least it shouldn’t be. We are on the same team, with the same ultimate goal.”

Why we must include indigenous populations in genetic research. 96% of medicine is based on the genetics of people of European descent. The rest of the world is virtually unrepresented, and this is dangerous, says Hawaiian geneticist Keolu Fox, because we metabolize drugs differently based on the composition of our genomes. Keolu Fox wants to democratize genome sequencing — and specifically, to include indigenous populations in this work. He is working on a mobile genome-sequencing platform to help. “Traditionally, genomes are sequenced in a lab,” he says, “but what if you could sequence genomes on the fly?” His goal is “activating and empowering indigenous communities as citizen scientists.” In the past, the rights of indigenous communities have been exploited for the sake of medical research, yet these groups never saw benefits from often-intrusive studies. Fox looks to educate indigenous peoples on the uses and misuses of this information, empowering communities to be partners in genetic research — not just subjects. 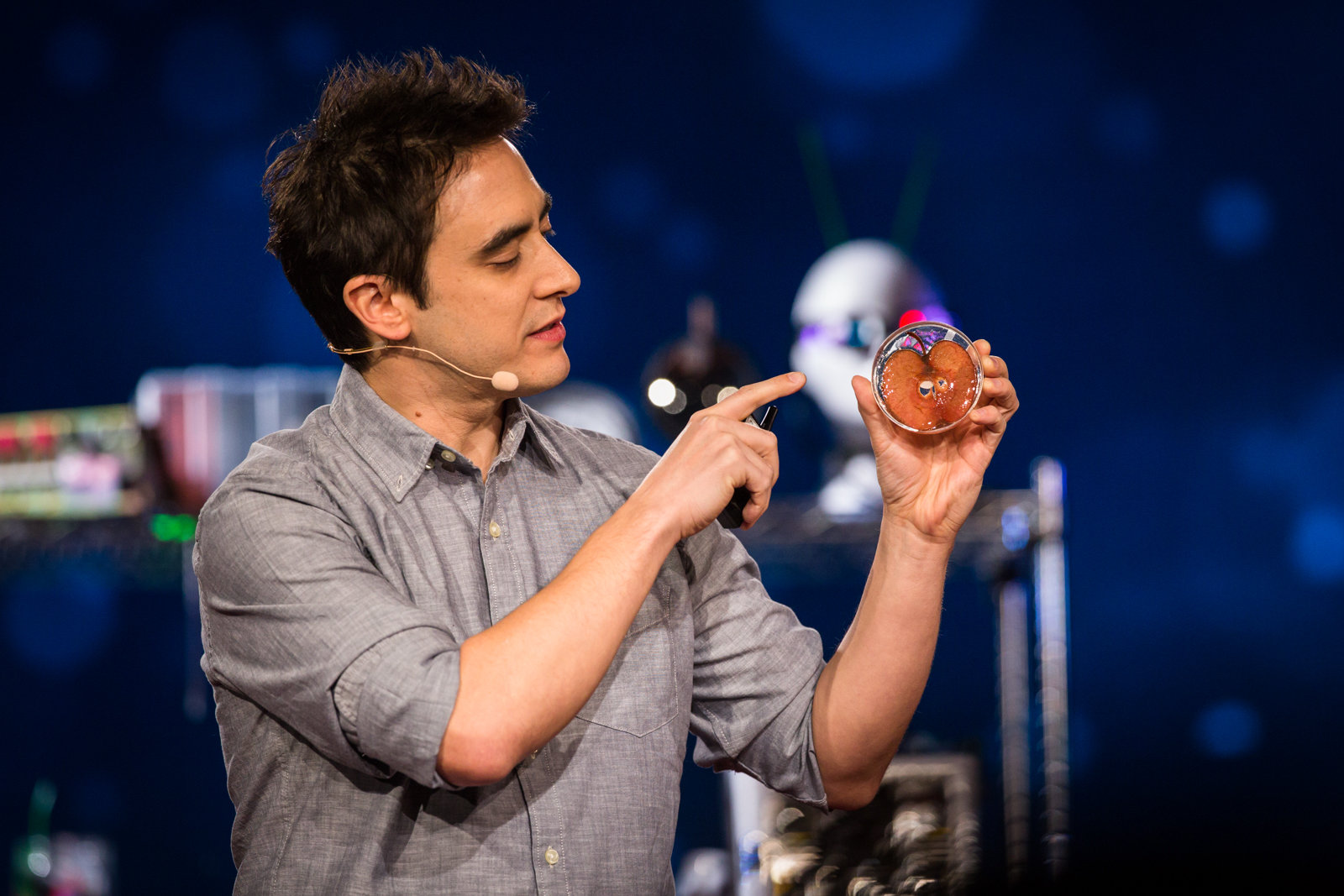 Justice for gem miners. When a gemstone is sold, the miner is often the last to profit, even if they risked their life to find it. Gemologist Majala Mlagui is working to change that, by bringing responsible sourcing to the mining industry. With her organization Thamani, which means “value” in Swahili, Mlagui seeks to set policies to benefit those who first make contact with precious stones and bring them a little monetary justice. “Once a colored gemstone pocket is found, there is usually a broker waiting to buy the stones, sometimes at exploitative prices,” says Mlagui. “If most of us questioned the provenance of the gemstones we wear, this would encourage the suppliers to be more responsible.” She hopes that transparency in the supply process will encourage gem buyers to be more conscious of their interactions, ultimately improving the quality of life for miners.

A lotus flower of slave ships, figures sculpted by bullets. Sanford Biggers creates art that sparks vital, if uncomfortable, conversations. On a seven-and-a-half-foot round glass panel, he etched a lotus flower, the Buddhist symbol of purity of mind and spirit. But if you look closer, he says, each petal is actually a cross-section of a slave ship, made up of 6,000 hand-carved lines. He calls his latest work BAM. For it, “I’ve been collecting wooden African figures from tourist shops around the world,” he says. He dipped them in wax, then took them to a shooting range where he imagined “resculpting them using bullets.” He couldn’t pull the trigger; he had to ask his cameraman to. “These artworks memorialize victims of racial violence in US history,” he says. “These killings have been going on for over 500 years. Through more thoughtful dialogue about history and race, we can evolve.”

A better battery. Ever wondered why you have to charge your phone so often? Vanessa Wood is determined to answer this question, and create better, longer-lasting batteries. She wondered if seeing the electrical activity inside batteries would help designers improve them. By using x-rays, Wood’s research group at ETH Zurich studied what happens during both charging and use. She shows the process. “When you charge your battery, lithium is inserted in the graphite particles and they expand. When you discharge, lithium leaves the graphite particles and they contract,” she says. “This is pretty complex stress that your battery has to tolerate.” Even with this information, making better batteries isn’t cheap or easy. Her team hopes to create batteries we can use in the next 5 to 10 years. And as host Tom Rielly points out in her Q&A, better batteries are key to energy independence, to store solar and wind power long-term. 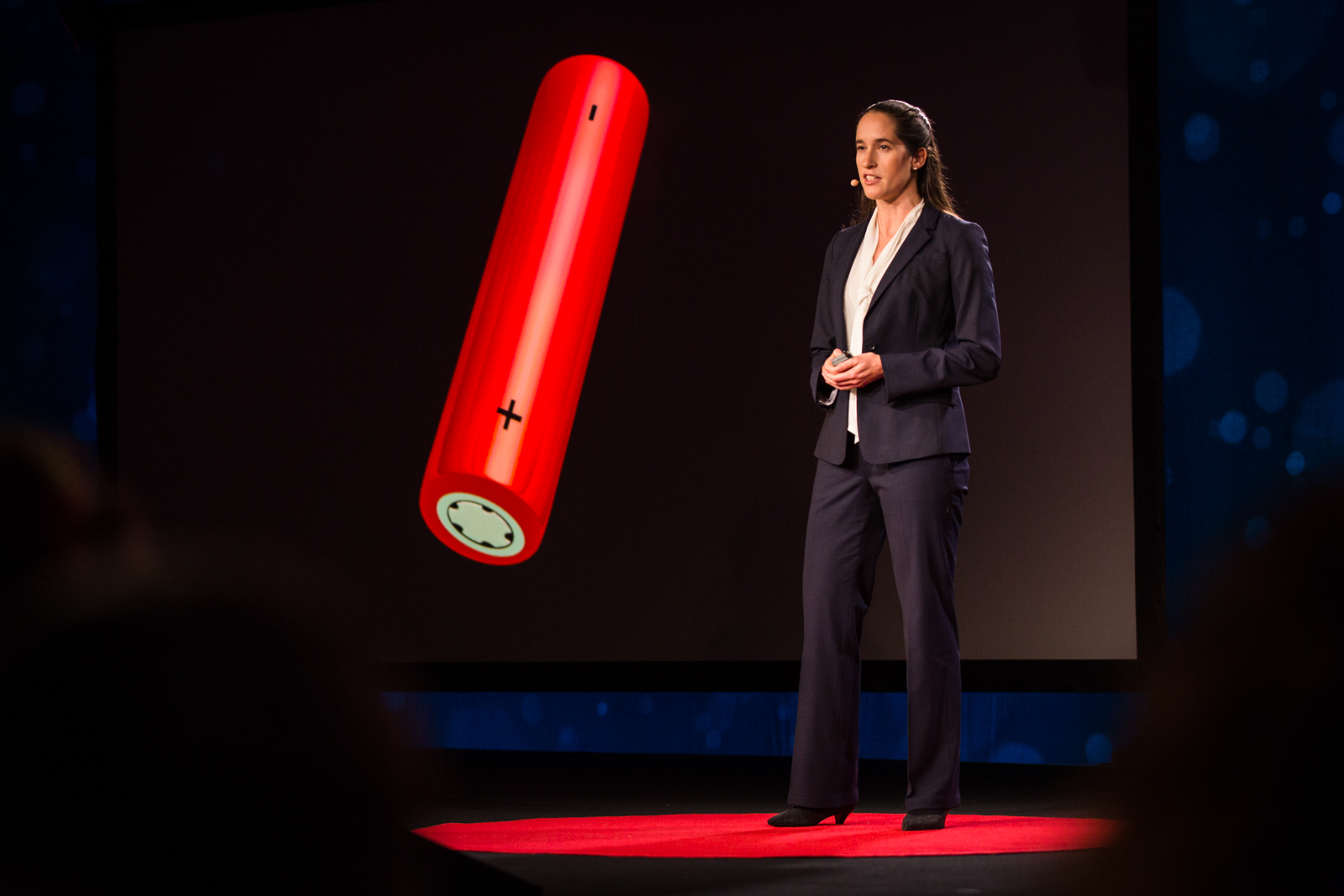 How we can protect whistleblowers. Under the First Amendment, the press has a right to publish secret information the public needs to know. But in the age of electronic surveillance, those who take the risk of sharing such information have few places to hide. “Since 9/11, nearly every important story has been result of a whistleblower,” says attorney Trevor Timm, and not having a safe way for them to step forward hampers the media’s ability to exercise their right. That’s why Timm’s company maintains and develops SecureDrop, software that allows an individual to upload a document safely and anonymously, without risking persecution. “These tools weren’t just built to help the brave men and women who expose crimes, but to protect all of our rights under Constitution.”

The youth in Afghanistan. Kiana Hayeri photographs millennials in Kabul, Afghanistan. Born between 1980 and 2001, they are “a generation that has only known war, a generation that no one really knows about,” says Hayeri, and yet they “show great resiliency and hope.” This slice of underground culture is largely secular — they dance, they drink, they play music, they even box — but not without a price: many live a life of duality, forced to hide their activities from those closest to them. Hayeri captures the many dimensions of youth culture in Afghanistan, which “seems to have found its voice” in the face of oppression.

Financial identity in the developing world. Trust: how do you earn it? Banks and other financial institutions use credit scores to determine if you’re trustworthy, and if they think you are, they lend you money. But Shivani Siroya asks: what about the 2.5 billion people around the world who do not have a credit score or financial identity? Siroya and her team created the app InVenture, which uses mobile data to create a financial identity. She points to Jenipher, a 65-year-old woman in Nairobi who owns a small food stand. The app tracked simple data points, like her regular phone calls to loved ones, to track her trustworthiness and helped her get a small-business loan. “With something as simple as a credit score, we give people the power to build their own futures,” says Siroya. “Our job now is to open the world to Jenipher, and the billions like her.”

Clues to prehistoric times, found in fish. Prosanta Chakrabarty lives for ichthyology — the study of fish. This may seem dull, he admits, but it’s extremely not. In his work, he actively explores caves, some of the most isolated places on earth, to discover new cave species (he’s found 13 new ones so far). Cavefishes live in complete darkness and thus have fascinating adaptations; they don’t have eyes and lack pigment in their skin. He studies their DNA to figure out their closest relatives, which are often surprising: For instance, Typhletoris maraybe is from Madagascar — but its closest relative is in Australia. This gives Chakrabarty clues into how continents broke apart 100 million years ago. “Through their DNA, they give an exact way to time and date geological events,” he says.

A new way for college students to report assault. Jessica Ladd was stunned by the stats surrounding sexual assaults on campus — less than 10% of people who are assaulted report the crime, and 90% of sexual assaults are committed by repeat offenders. An infectious epidemiologist by training, Ladd saw this as “a tragic but solvable problem.” She has created a platform, Callisto, for students to report assaults online without having to identify their assailant — a type of “information escrow” that only releases this information to a third party if certain pre-agreed conditions are met, say if their attacker matches another report. “We could prevent 59 percent of sexual assaults just by stopping repeat perpetrators early on,” says Ladd. This same type of reporting system could also be used in the military or workplace. As she says: “We don’t have to live in a world where 99% of rapists gets away with it.”

Reimagining normal. As a video artist, Safwat Saleem felt self-conscious using his own speaking voice in his work. His fears were confirmed when he saw YouTube commenters deriding his Pakistani accent. Quietly, the audio began to leave his work altogether, because his voice wasn’t “normal.” But as Safwat points out: What is normal? “We must continuously challenge our notion of normal,” he says, “because doing so as a society will help us finally see the sky for what it is.”

A polymath musician. With wild hair and very red socks, Usman Riaz sits down with his guitar to treat us to a song. He’s here to show his guitar technique that’s part percussion, part traditional fingerwork. He plays out the session with the song “Firefly,” lulling the audience with dreamy panache.