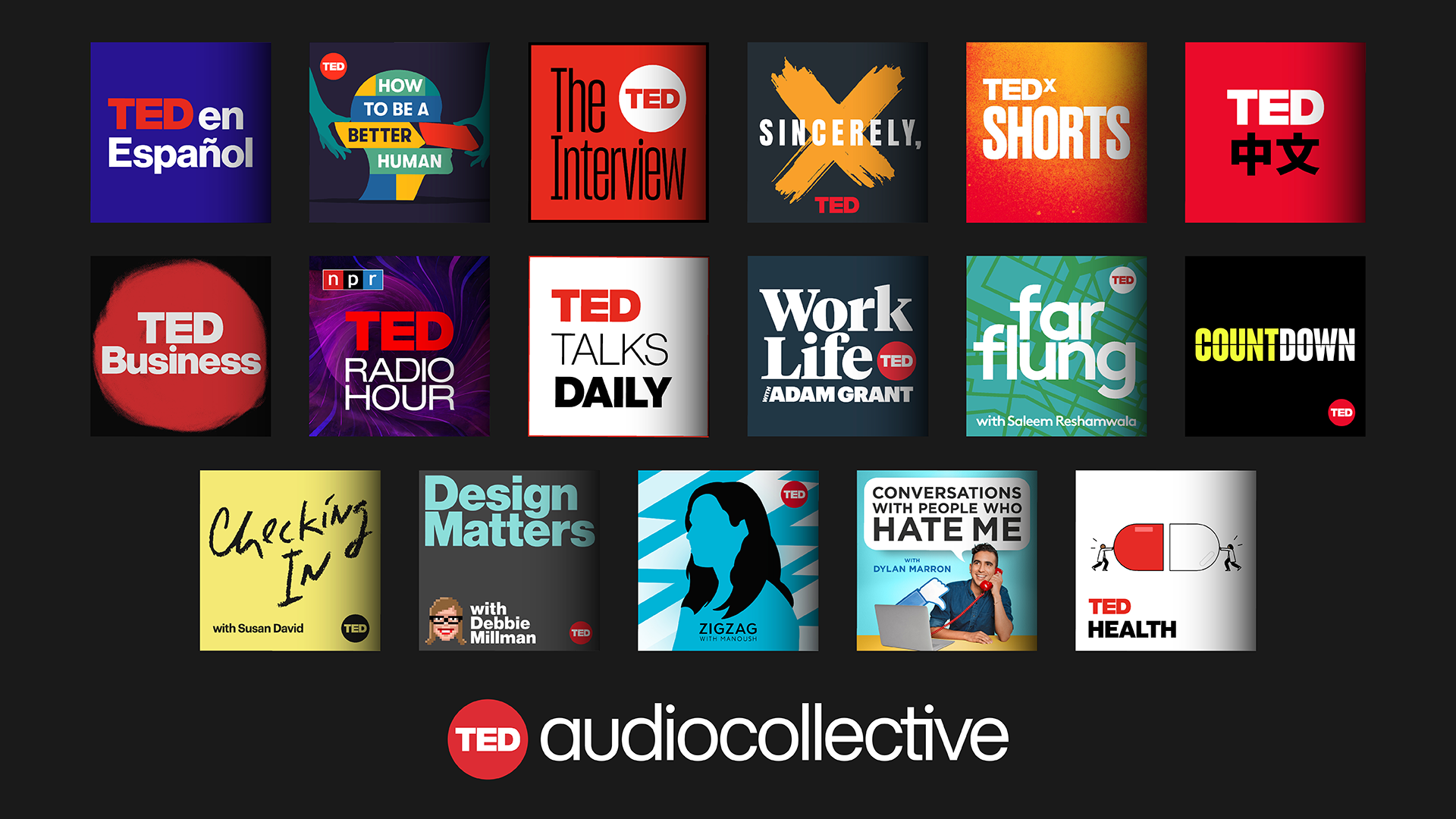 On February 22, 2021, TED launches the TED Audio Collective to house its growing collection of podcasts.

While broadly known for its global conferences and signature TED Talk videos, TED is also one of the top podcast publishers in the world. TED podcasts are downloaded 1.65 million times per day in virtually every country on earth. Our shows have been consistently ranked by Apple Podcasts as “most downloaded” of the year, and TED Talks Daily was the second most popular show globally on Spotify in 2020. Now the TED Audio Collective expands upon that foundation, creating a home for shows co-developed by TED and our speakers as well as shows developed and produced independently by inspiring thinkers and creators.

The podcasts in the TED Audio Collective are for listeners curious about everything from philosophy and psychology to science, technology, business and unexpected pathways in between — all curated through TED’s lens of “ideas worth spreading.” Here’s a sneak peek of exciting new content to expect over the coming months.

New in the TED Audio Collective:

Dr. Jen Gunter is on a mission to make us experts on the way our bodies work. Body Stuff is an original show developed by TED that aims to demystify the systems of the body while debunking medical myths along the way. Did you know that you don’t actually need eight glasses of water a day? That you can’t “boost” your immune system?

From COVID to electoral politics, people are turning to data to make sense of the world as never before. But how well do we understand what those numbers actually mean? Interpreting data has never been more timely or relevant to fight misinformation and understand the world around us.

In this original, sound-rich series, data scientist Mona Chalabi will take listeners on an inquiry into the central question: How can we use data to make sense of our lived experiences, and what are the limits of that data? Along the way, she will tackle urgent, random and sometimes deeply personal questions: How does Google calculate walking speeds? What happens when cities get louder? When will my heartache end?

Conversations with People Who Hate Me

TED alum Dylan Marron is joining the TED Audio Collective to continue exploring what happens when online feuders step out from behind the keyboard and get to know the human on the other side of the screen.

In an internet era characterized by comment section wars, devastating clapbacks and anonymous vitriol, Dylan Marron connects people who have clashed online — from old friends to complete strangers — to explore why we believe what we believe, how we relate to each other on the internet and just what a phone call can accomplish. Don’t be fooled by the title! It’s actually a loving show that fosters unlikely connections in an age of increasing digital isolation.

The iconic Design Matters with Debbie Millman pulls back the curtain on how incredibly creative people design the arc of their lives. It’s the world’s first podcast about design — an inquiry into the broader world of creative culture through wide-ranging conversations with designers, writers, artists, curators, musicians and other luminaries of contemporary thought. Design Matters joined the TED Audio Collective in October 2020 and is produced independently, with TED amplifying the podcast to its global audience.

(New episodes every Monday. Watch out for upcoming conversations with Adam Grant, Jacqueline Woodson, Nick Cave and many more.)

Plus, new episodes from:

Hosted by Manoush Zomorodi, ZigZag is a business show about being human. Manoush takes listeners on a journey to discover new ways we can align our business ambitions with systemic change that’s good for our fellow human beings and the world. In March 2021, Manoush will release season six: “The Zig Zag Project.” Over six weeks, she’ll lead a boot camp for listeners who want to make big changes in their work life by finding ways to align their personal values with their professional ambitions.

Columbia Business School professor Modupe Akinola hosts TED Business, a show that explores the most powerful and surprising ideas that illuminate the business world. After hearing a TED Talk, listeners get a mini-lesson from Modupe on how to apply the ideas from the talk to their own lives. Because whatever your business conundrum — how to land that new promotion, set smarter goals, undo injustice at work or unlock the next big thing — there’s a TED Talk for that.

WorkLife with Adam Grant is back with its fourth season! Organizational psychologist Adam Grant takes listeners inside the minds of some of the world’s most unusual professionals to explore the science of making work not suck. Season four kicks off with a bonus episode where JJ Abrams interviews Adam Grant about his new book, Think Again.

In The TED Interview, Head of TED Chris Anderson speaks with some of the world’s most interesting people to dig into the most provocative and powerful ideas of our time. From Bill Gates to Monica Lewinsky, Chris follows his curiosity across myriad topics and disciplines, diving deep with the most compelling thinkers from the TED stage and beyond. Entering the sixth season of the show this year, Chris investigates “The Case for Optimism” and why there’s still reason for tremendous hope in these trying times.

In each episode of TED Radio Hour, host Manoush Zomorodi explores a big idea through a series of TED Talks and original interviews, inspiring us to learn more about the world, our communities and, most importantly, ourselves. TED Radio Hour is a co-production of NPR and TED.

(New episodes every Friday. Watch out for an exciting episode in March called “Through The Looking Glass” about the tools that scientists, physicians and artists use to extend our perception of what we can see and our boundaries of consciousness — featuring TED speakers Emily Levesque, Ariel Waldman, Rick Doblin and more.)

Our Partners: TED Partnerships, working in collaboration with the TED team and podcast hosts, strives to tell partner stories in the form of authentic, story-driven content developed in real-time and aligned with the editorial process — finding and exploring brilliant ideas from all over the world. Past and current partners are wide-ranging and diverse, including Accenture, Bonobos, Unilever, Hilton, JP Morgan Chase & Co, Lexus, Marriott Hotels, Morgan Stanley, Warby Parker, Verizon, Women Will, a Grow with Google program and more. Learn more here.

Other podcasts in the TED Audio Collective: Far Flung with Saleem Reshamwala, Sincerely, X, Checking In with Susan David, TED Talks Daily, TED Health, How to Be a Better Human, TEDx SHORTS, TED en Español and TED in Chinese.