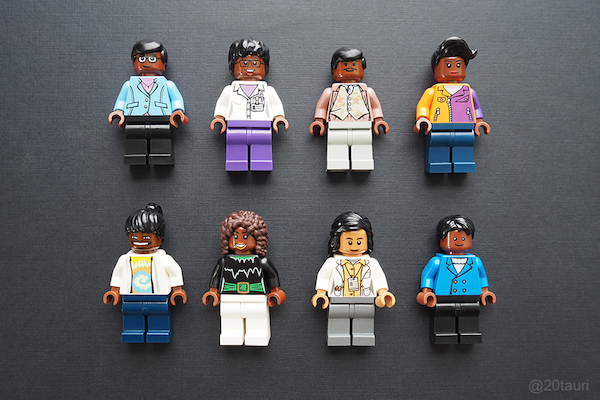 LEGOs are for building spaceships, crafting castles and getting lost in your couch. But what if they could be used not just to dream of lands long ago and times far away, but to inspire future scientists? That’s what writer Maia Weinstock had in mind when she made these STEM scientist action figures.

Weinstock has turned TED Fellows Jedidah Isler (an astrophysicist), Danielle N. Lee (a biologist) and David Sengeh (a bio-engineer), as well as TED speaker Mae Jemison (an astronaut) into miniature figurines using LEGOs. In the Scientific American article “It’s time for more diversity in STEM toys,” she explains why: increased racial diversity in STEM toys can help kids imagine (and then create) a world where Hispanic programmers and African-American chemists are the norm instead of notable exceptions.

STEM — Science, Technology, Engineering and Math — is a place where students in the United States are lagging behind. And minority students are left out disproportionately, says Weinstock, who cites these numbers: African-Americans make up about 12% of the US population, but only earn 7% of STEM bachelor degrees and 2% of STEM PhDs. Among the causes, Weinstock suggests, are disparities in access to AP courses and after-school programs that would prepare kids adequately for them.

And then there’s the toys.

Toys alone cannot solve the problem, of course, but they can create a framework of representation. And despite the fact that racial demographics are shifting rapidly in the US, most toys that depict people still default to a Caucasian/white skin tone. It may seem trivial, but it sends kids a clear message about their potential.

“It’s time to encourage underrepresented kids’ interest in STEM with more toys and media demonstrating that they belong in these fields,” writes Weinstock.

Minority representation in STEM toys can encourage minority students to have the same STEM aspirations as their white peers. And so Weinstock created these custom figurines to serve as an example to companies like LEGO, and as an encouragement for toy companies that are already increasing their minority representations in toys. Weinstock’s figures include scientists in their element, complete with tiny lab equipment.

All the TEDsters featured are active advocates of empowering minority students. As Danielle N. Lee put it, “As an ‘Other’ in science, I have witnessed how ‘traditional’ science education fails urban students.”

Jedidah Isler echoes, “I believe STEM can be used as social uplift.”